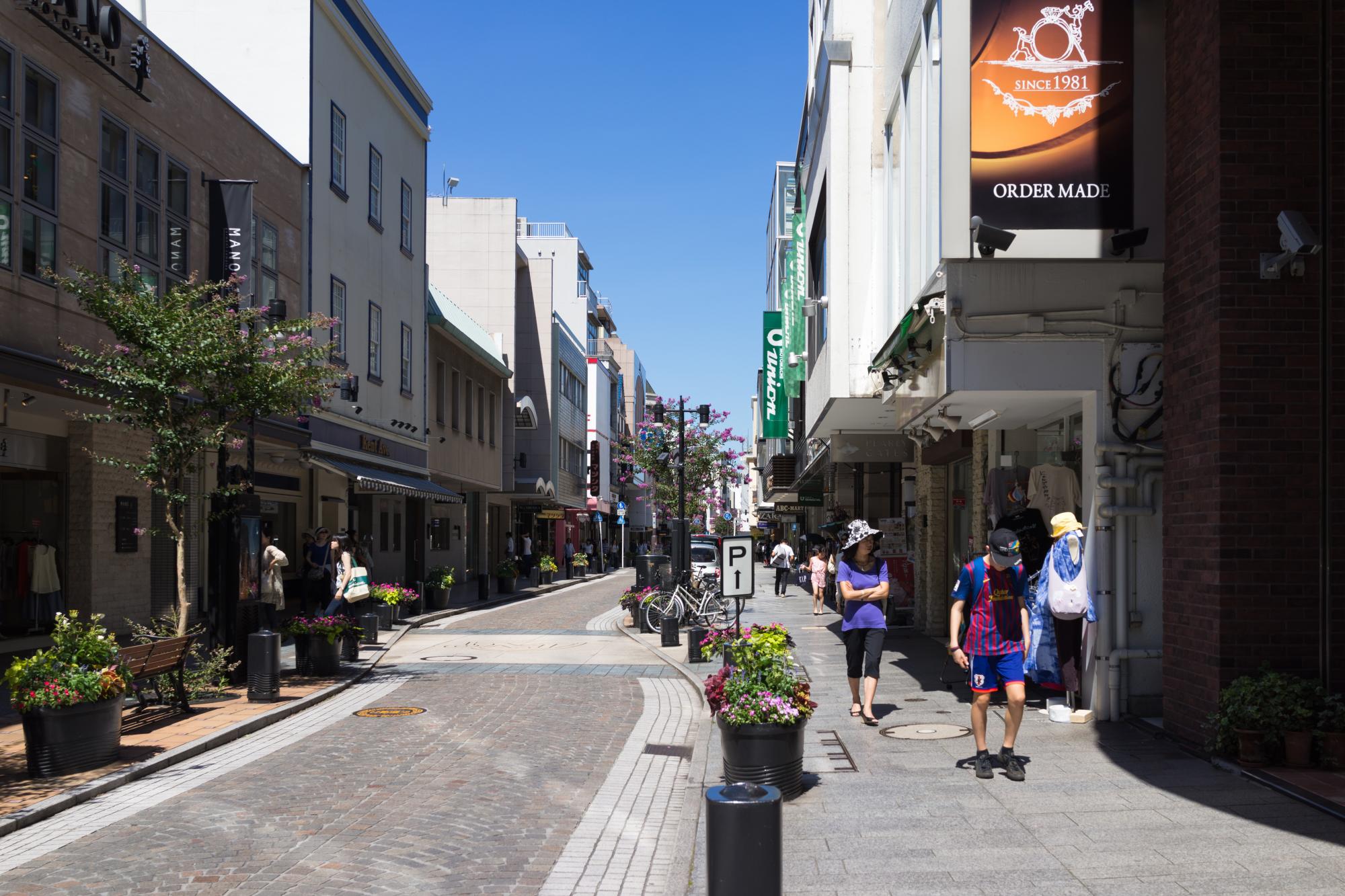 Experience some of Yokohama's shopping culture at the city's most famous shopping area: the Motomachi Shopping Street! There are various cafes, restaurants and shops along the stylish street that compliment each other very well. It has a unique atmosphere that is both "kawaii" (the Japanese word for "cute") and high-class. The street is located between the Kannai district and Yamate district, with the main section (a 1km stretch) extending from around Ishikawacho station (JR Negishi line) to Motomachi-chukagai station (Minatomirai line). The Motomachi Craftsmanship Street to the south of the street and the Kagan-dori Street is on the north side. Well-known bargain sales called "Charming Sale" are held at the end of February and also at the end of September every year, which draw many people from all over Japan. Although, it is also a nice place if you're just trying to take a leisurely stroll.
Yokohama is a port city that opened its gates to the world in 1859. The port area was originally a fishing village called "Yokohama village", but after the port opened, the residents moved out of the village and moved to present-day Motomachi. Their new home was named "Yokohama Motomachi" (original Yokohama town) because the town was built by the people who originally lived in Yokohama village. Motomachi was located in between Kannai district (an area filled with foreign trading companies) and Yamate district (a foreign residential area), so the village people were constantly busy with foreign customers and as a result, they decided to open up various restaurants and shops to cater to foreigners. Consequently, Motomachi ended up creating its own original culture by absorbing Western culture. Many brands have originated from Motomachi. For example, in 1980 a fashion style called “Hamatora” caught on in Japan.
Please refer to following article for information about various restaurants, cafes and food in Motomachi.
https://www.ambassadors-japan.com/en/yokohama-portscape/369/ 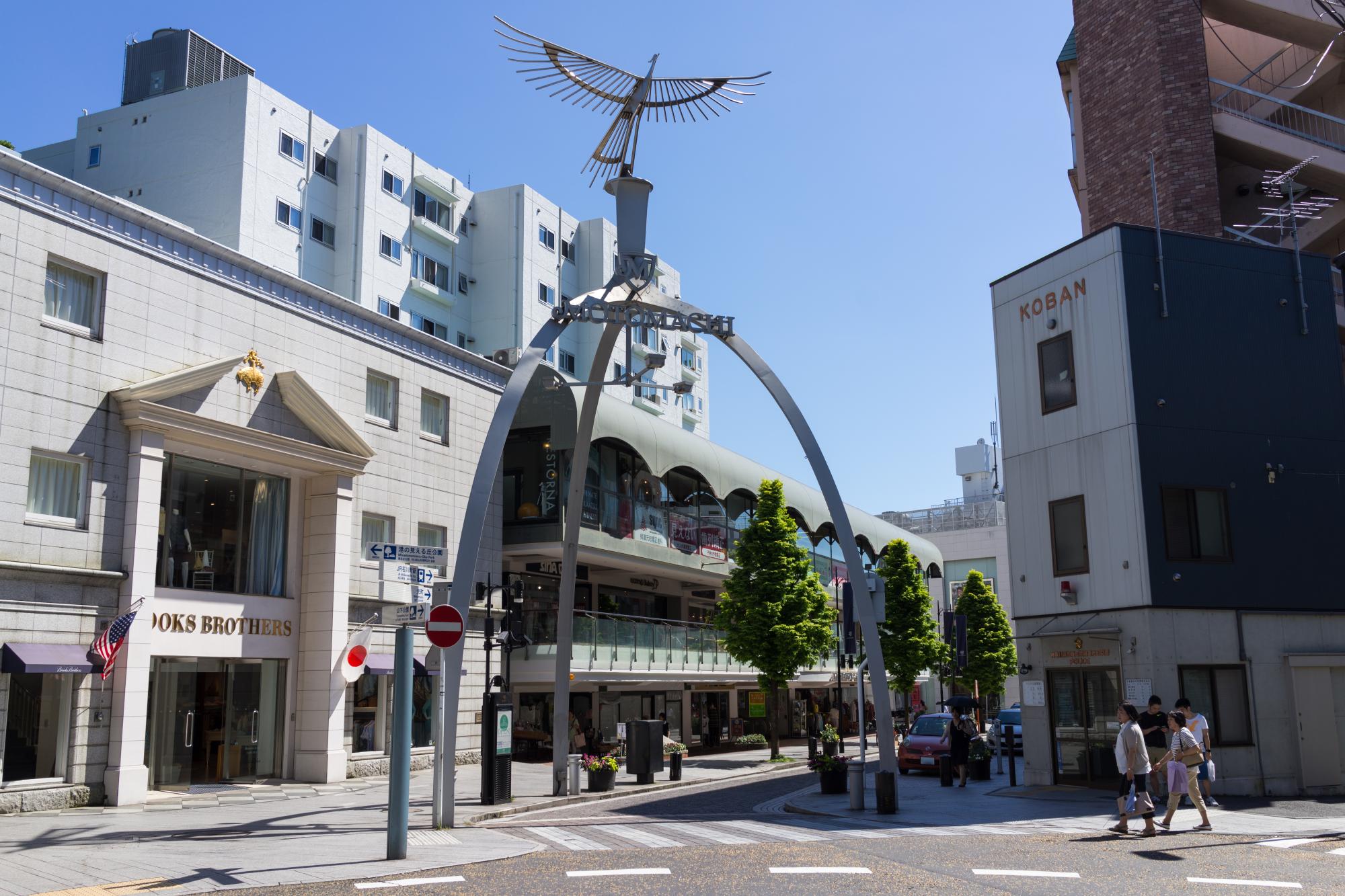 Phoenix Arch (the entrance on the Motomachi-chukagai station side) 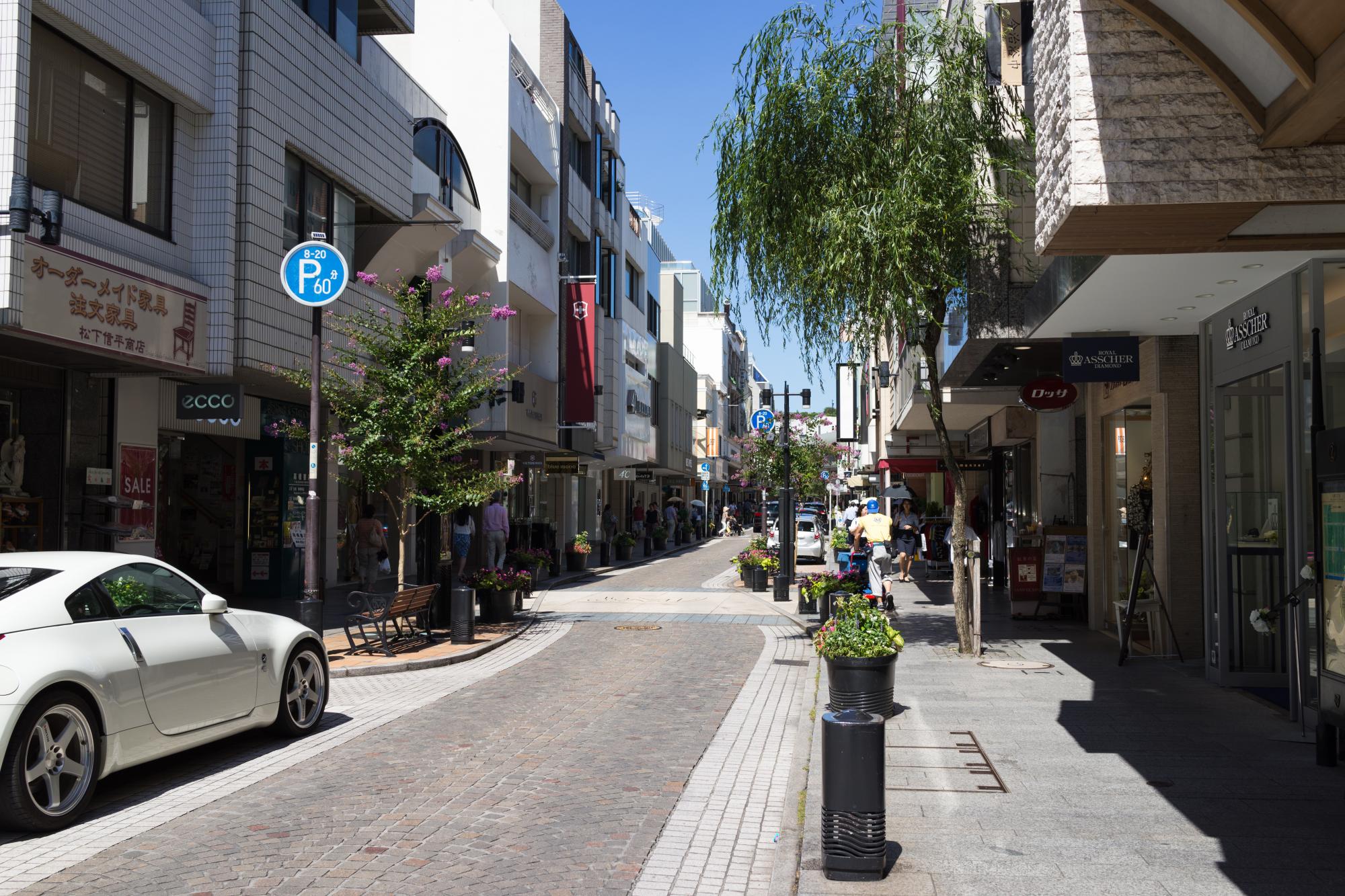 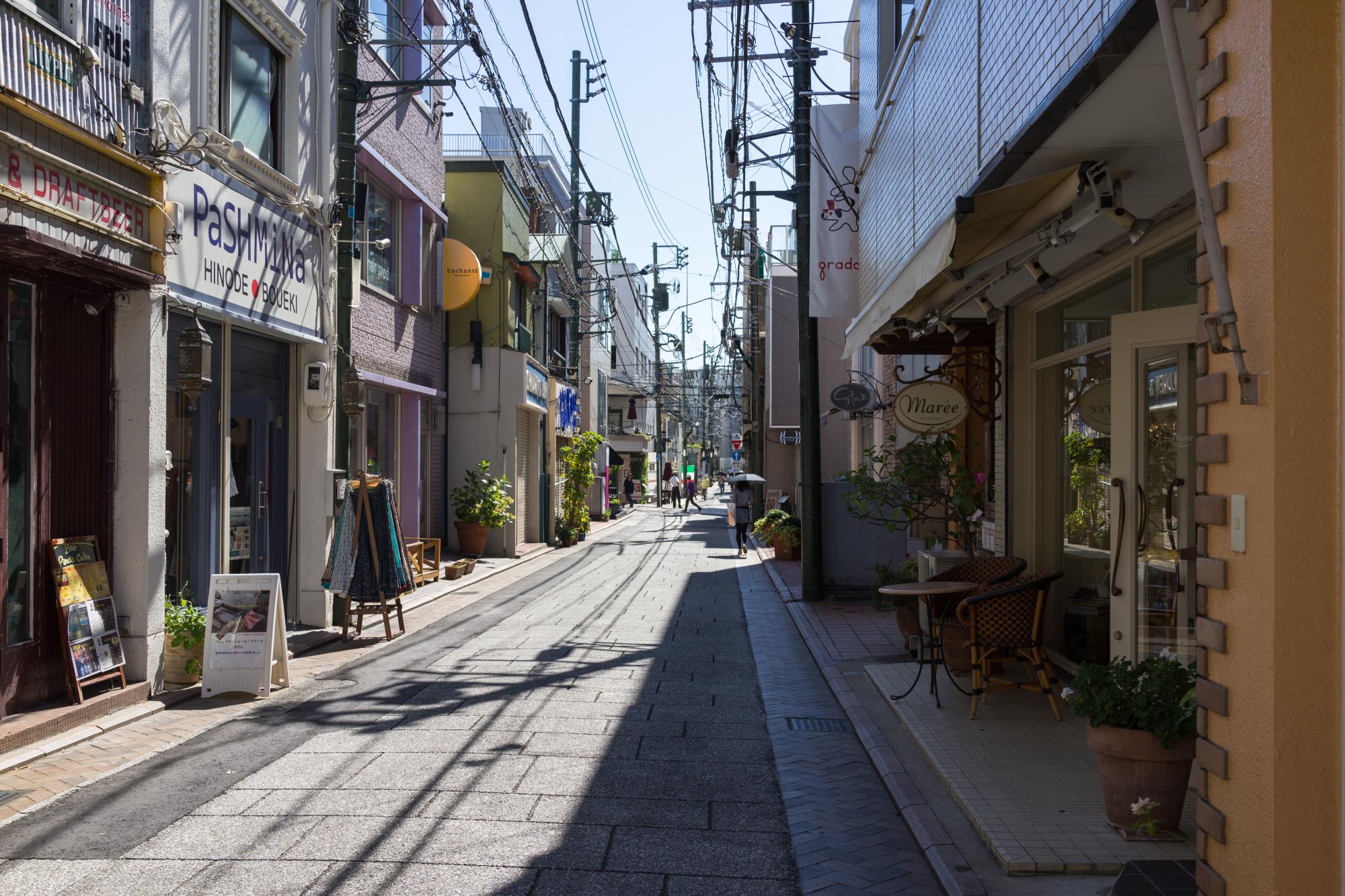 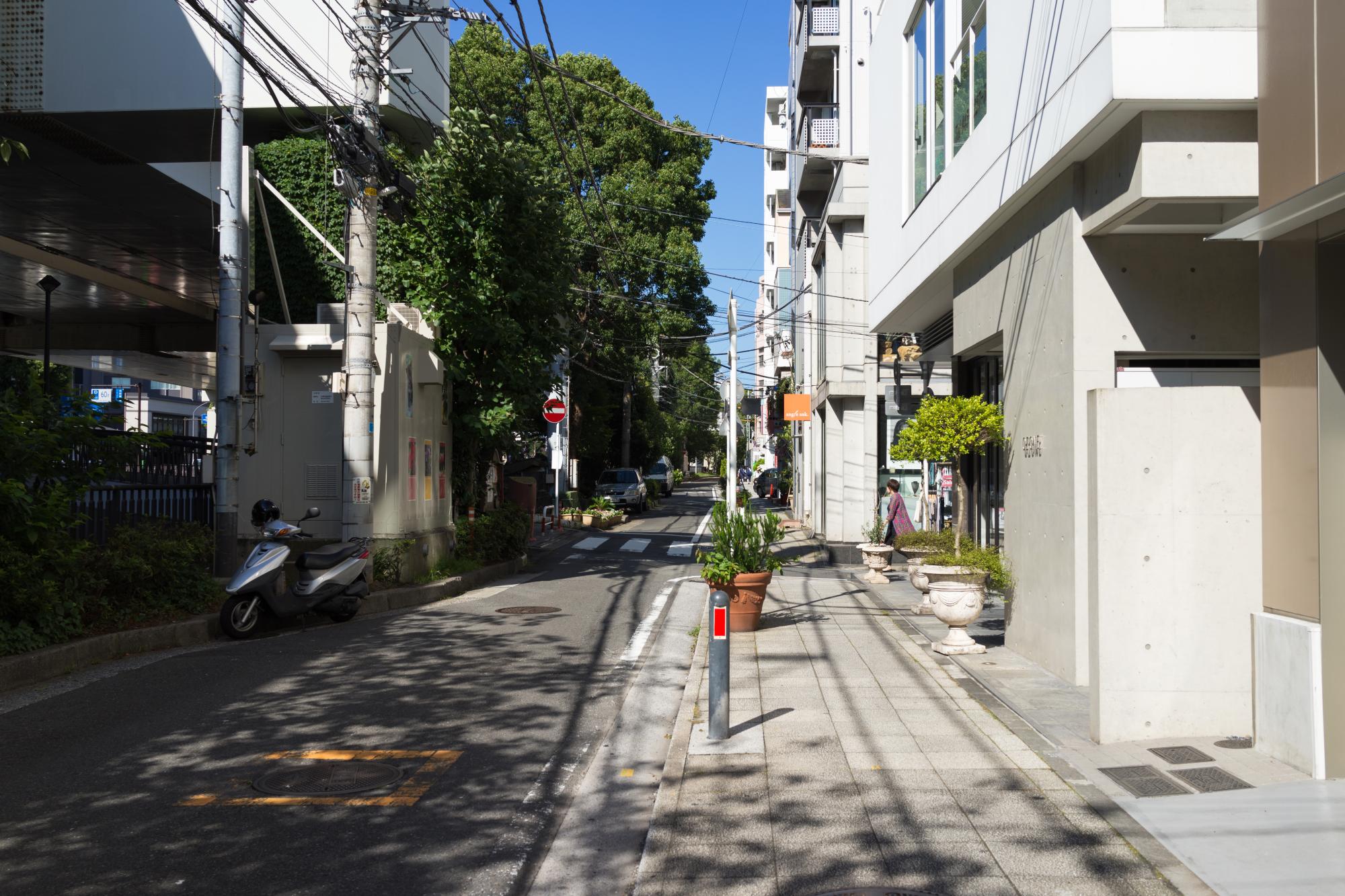 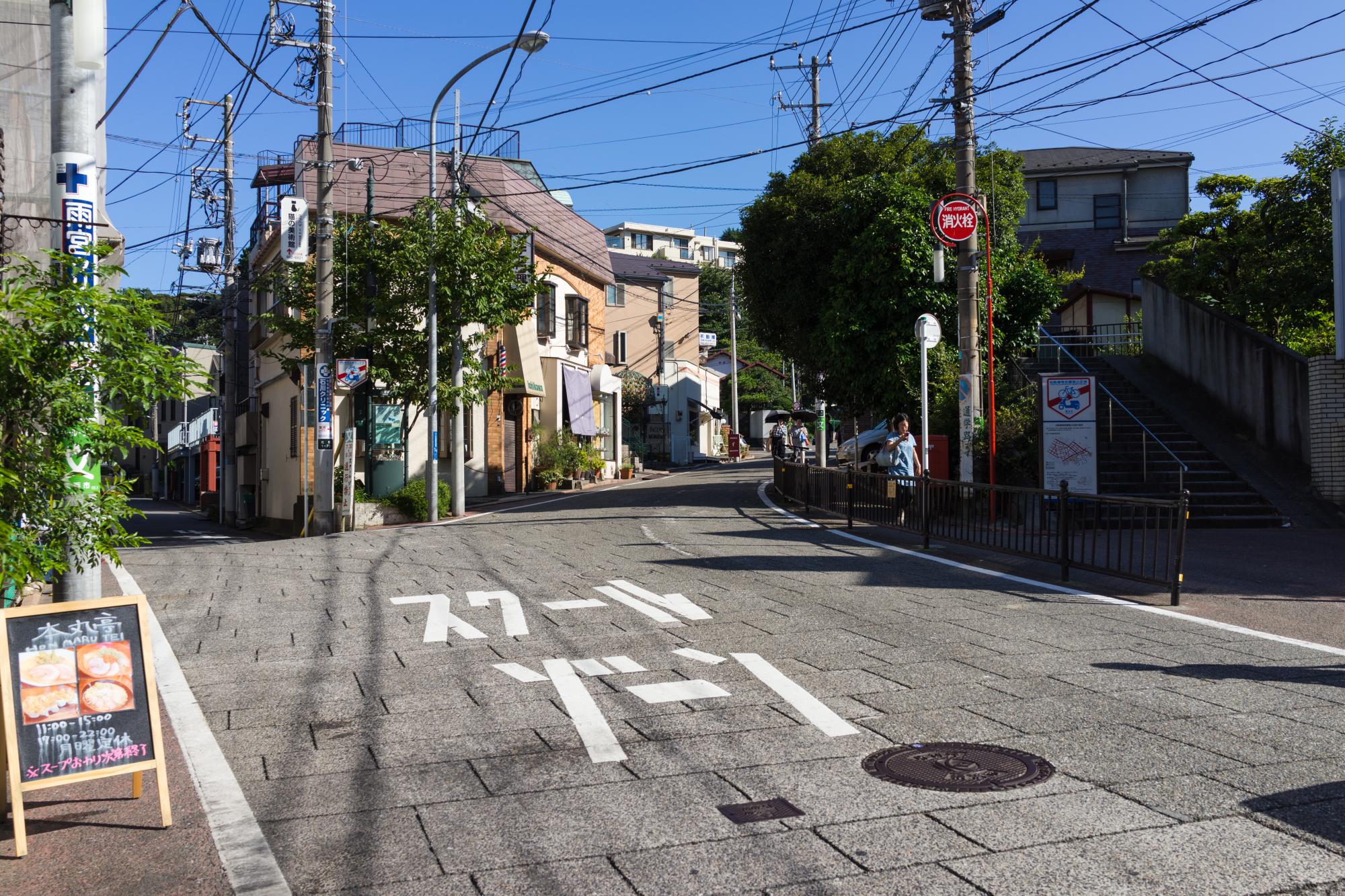 "Yokohama Masuda Pottery revived the tradition and spirit of 19th century Yokohama Porcelain". When Japan was opened to the world in the latter part of the 19th century, Japanese porcelain already had a good reputation overseas. The influx of trade caused many potters to move to Yokohama. Yokohama Porcelain ended up becoming a unique blend of Western and Japanese elements because Yokohama was the first place where Japanese potters were able to see Western works of art. Unfortunately, all the potteries specializing in Yokohama Porcelain were destroyed due to the Great Kanto Earthquake of 1923 and American air raids in 1945. After World War however, Yokohama Masuda Pottery revived Yokohama Porcelain. They produced various works of art, including pottery which had Ukiyoe (Japanese depictions of everyday life), which they called "Yokohama-e" on it. They also had pottery with landscapes of Yokohama drawn on as well. 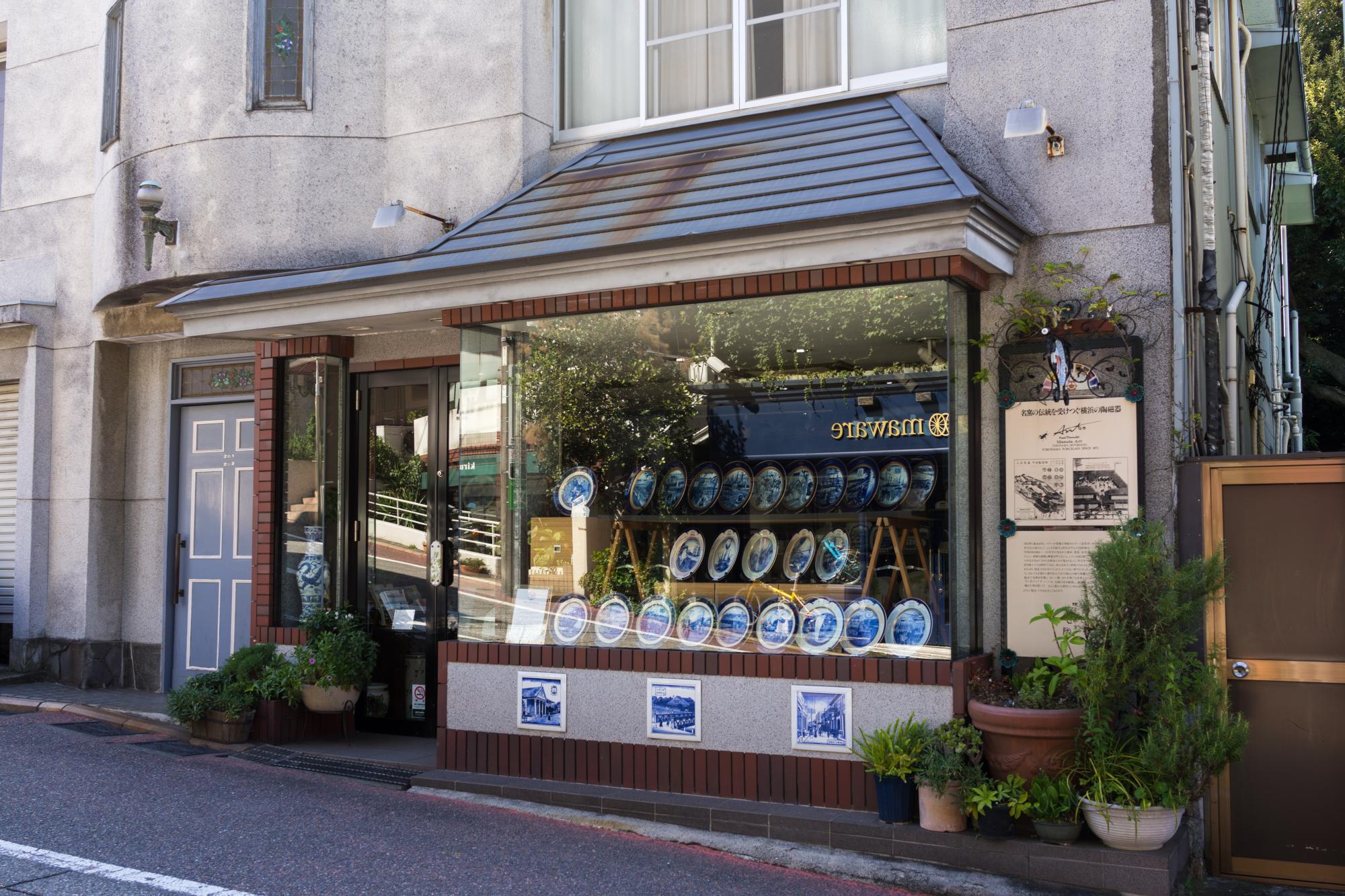 Clothing of Fukuzo, shoes of Mihama and a bag of Kitamura; quoted from hamarepo

To many people, Motomachi is synonymous with “Hamatora”. Hamatora is a fashion style that was popular in the 1980s and is an abbreviation for "Yokohama traditional". The style is based off of the clothes of female college students who made their daily commute to Yamate district (they were usually very rich and proper young ladies). The style is thought to have originated from the Ivy League look that was popular in the 1960s. Clothing from "Fukuzo", shoes from "Mihama" and a bag from "Kitamura" were called the three essential status symbols of Hamatora. The concept of the brand has remained mostly unchanged throughout the years. For Japanese people Hamatora is a classic, but what do you think of it?
"Fukuzo" is a tailor shop that was established in 1946. With a seahorse as its iconic trademark, they produce clothes made from their own yarns and fabrics. Their lovely designs have been popular throughout the years so much so that some families have been buying Fukuzo clothes for three generations!
"Mihama" is a shoe shop that was established in 1923. They emphasize functionality and easy to wear styles and produce low heeled shoes with a toe box that is rounded. Mihama shoes have been old-time favorites of the people in Yokohama, who have to walk up many hills on an everyday basis.
"Kitamura" is a bag shop established in 1882. Their concept is “Simplicity, Cuteness, and Elegance” and their trademark symbol is a “K”.
"STAR JEWELRY" is also an element of Hamatora fashion. STAR JEWELRY is a jewelry shop that was established in 1946. When the shop opened, they sold jewelry directed towards foreign customers. The beautiful jewelry is made by skilled craftsmen with the concept of "playful spirit" in mind.
http://www.star-jewelry.com/en/ 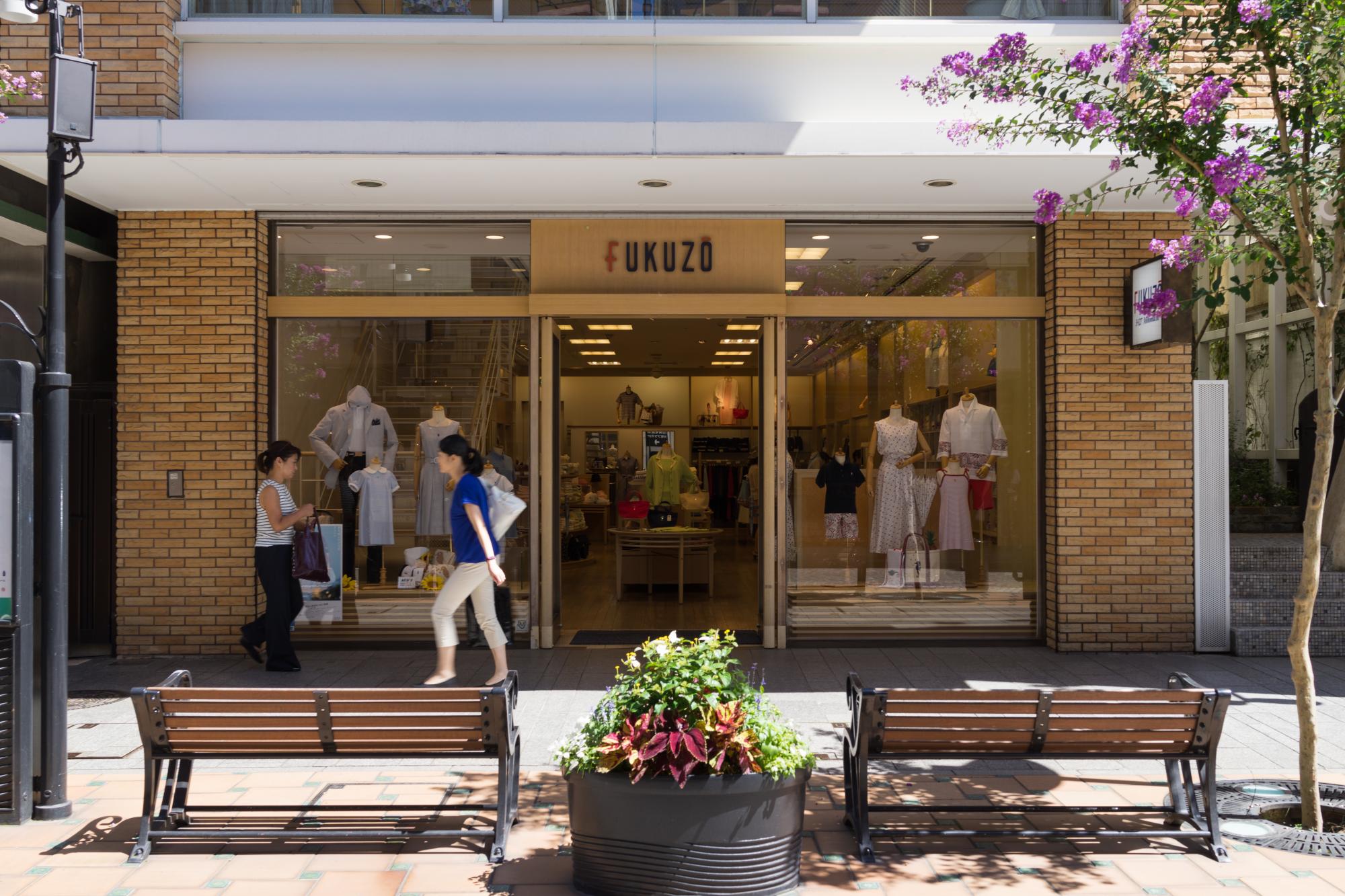 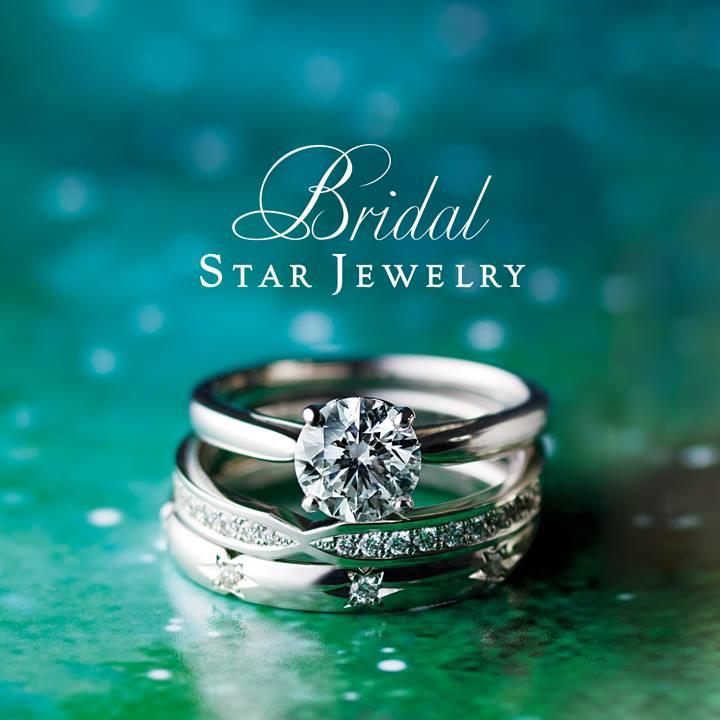 Additionally, there are many more shops unique to Motomachi. "POPPY" is a sophisticated men’s clothing store that was established in 1881. "Kent Ave." is a shop selling men’s clothing that continues to keep the tradition of the Ivy League look. "Hiroki" is a leather shop utilizing top quality materials. Each one of their items is made very carefully. 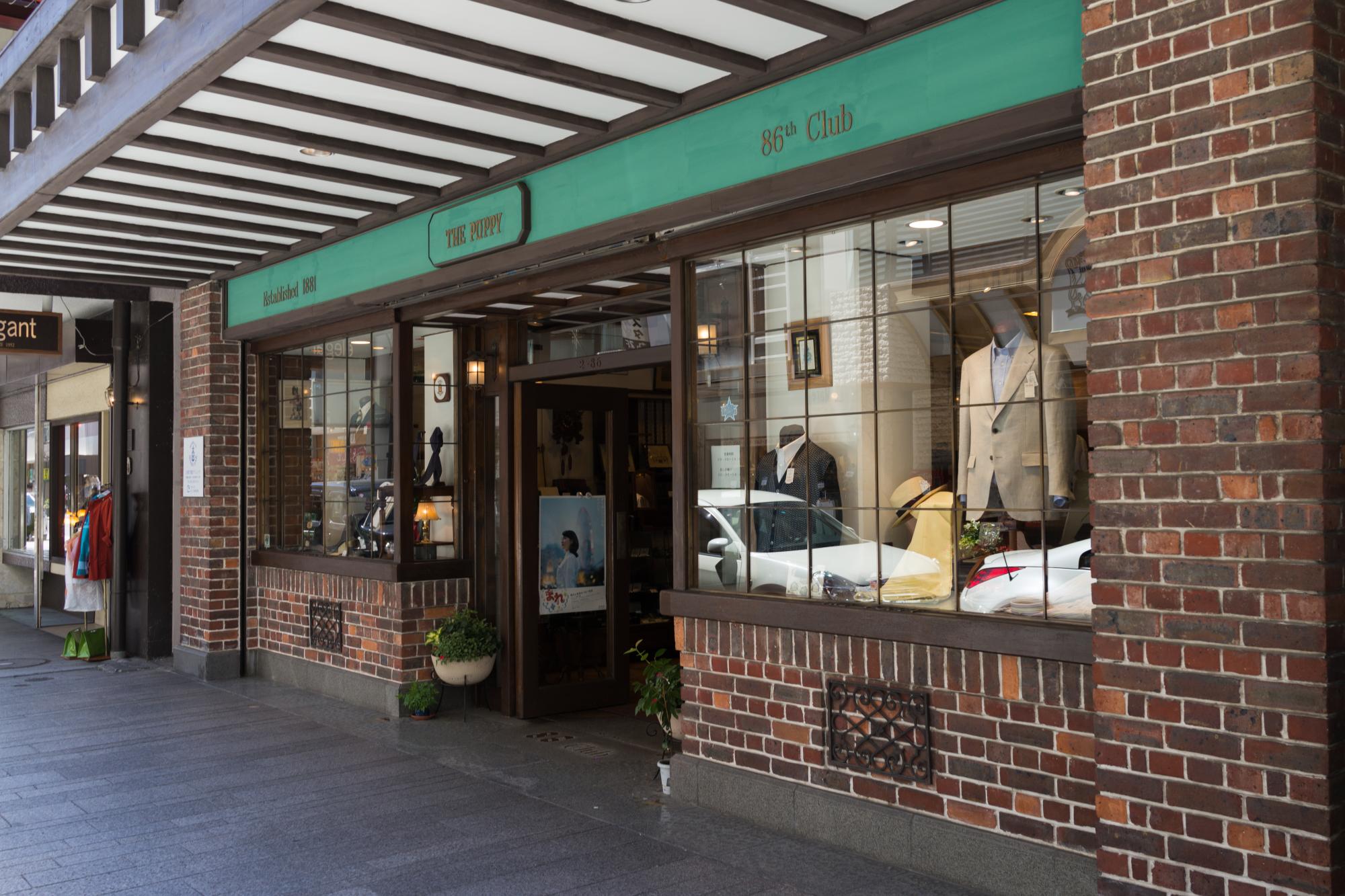 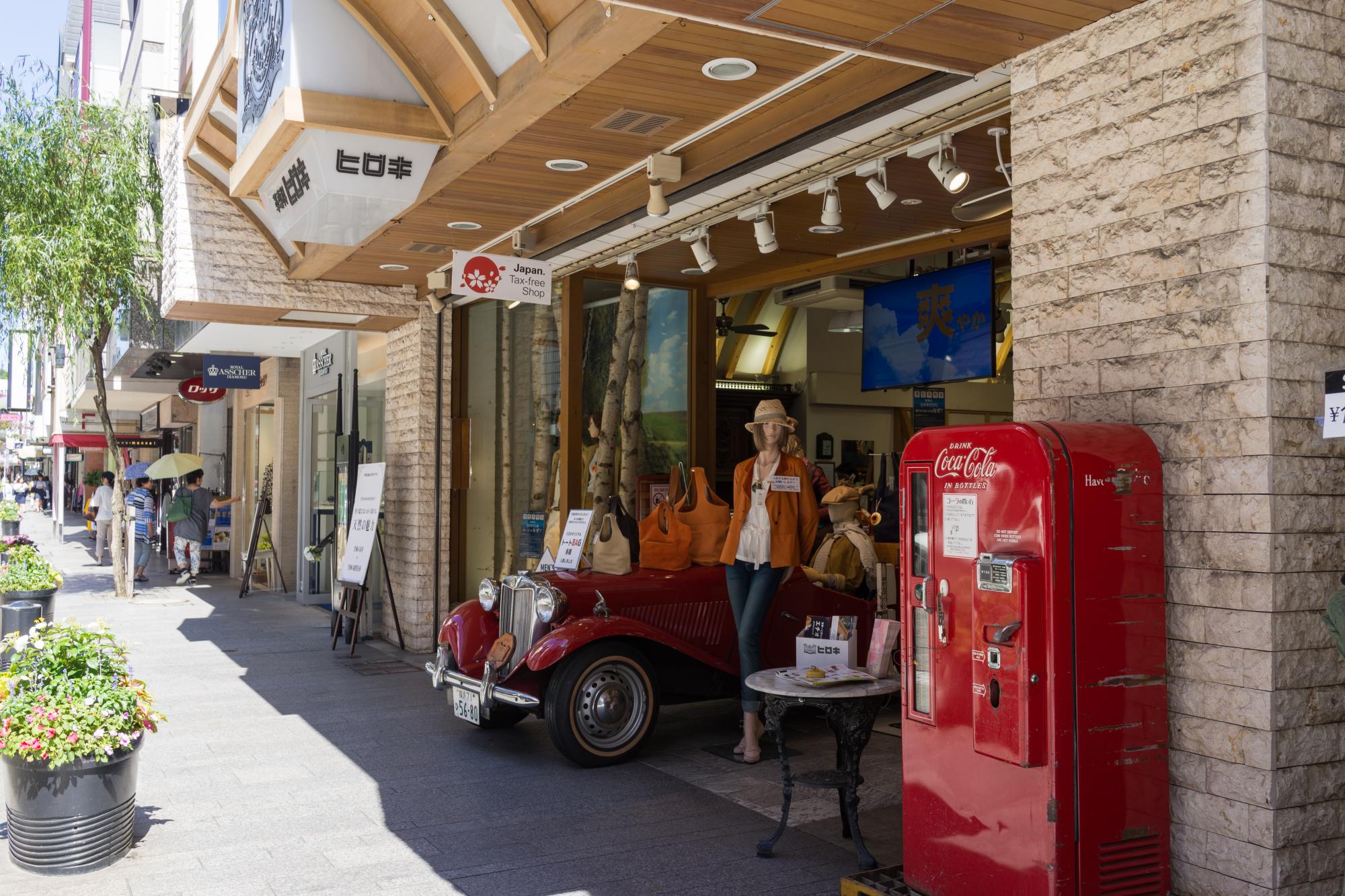 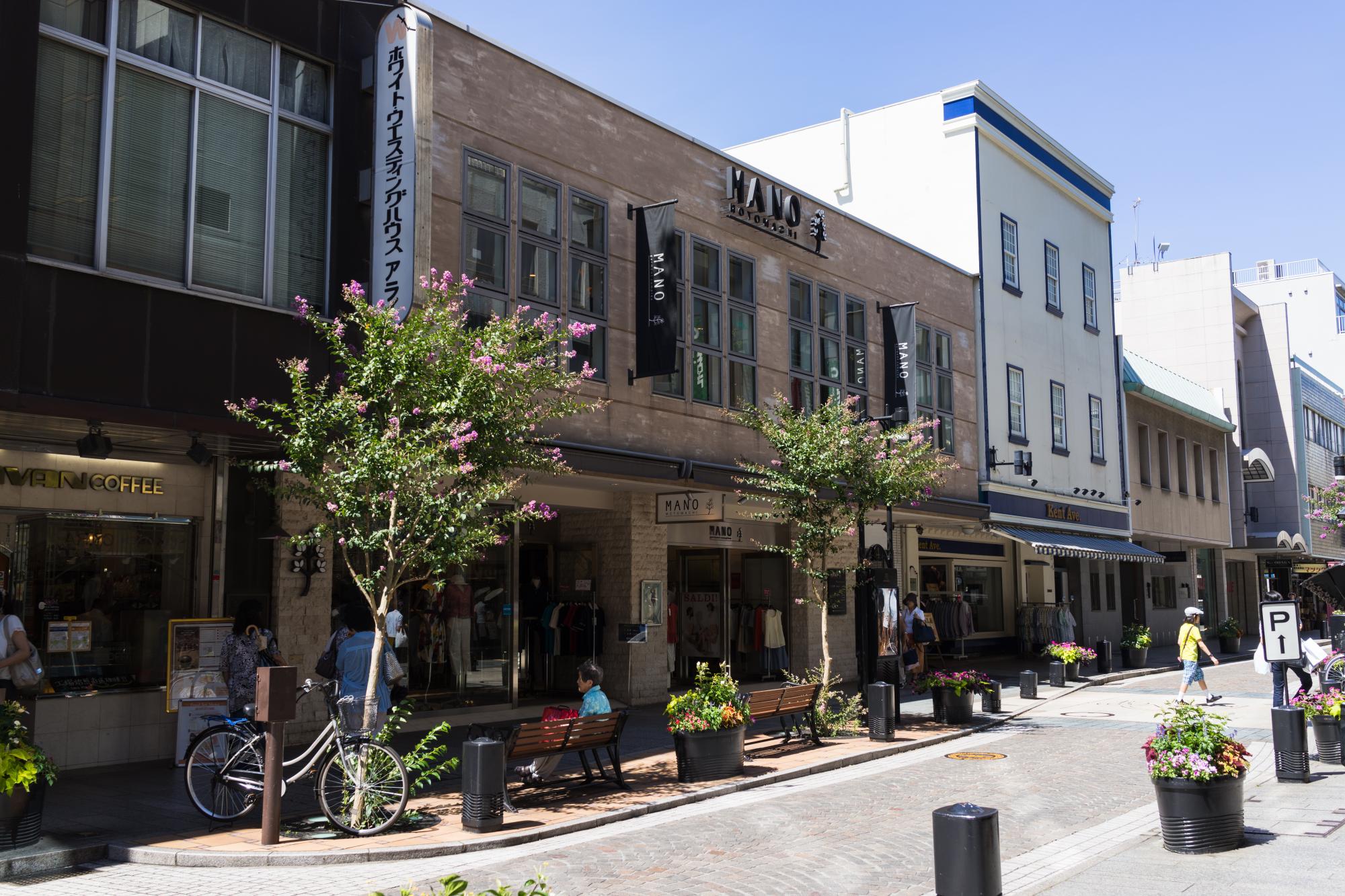 Kent Ave. (in the back of the picture) 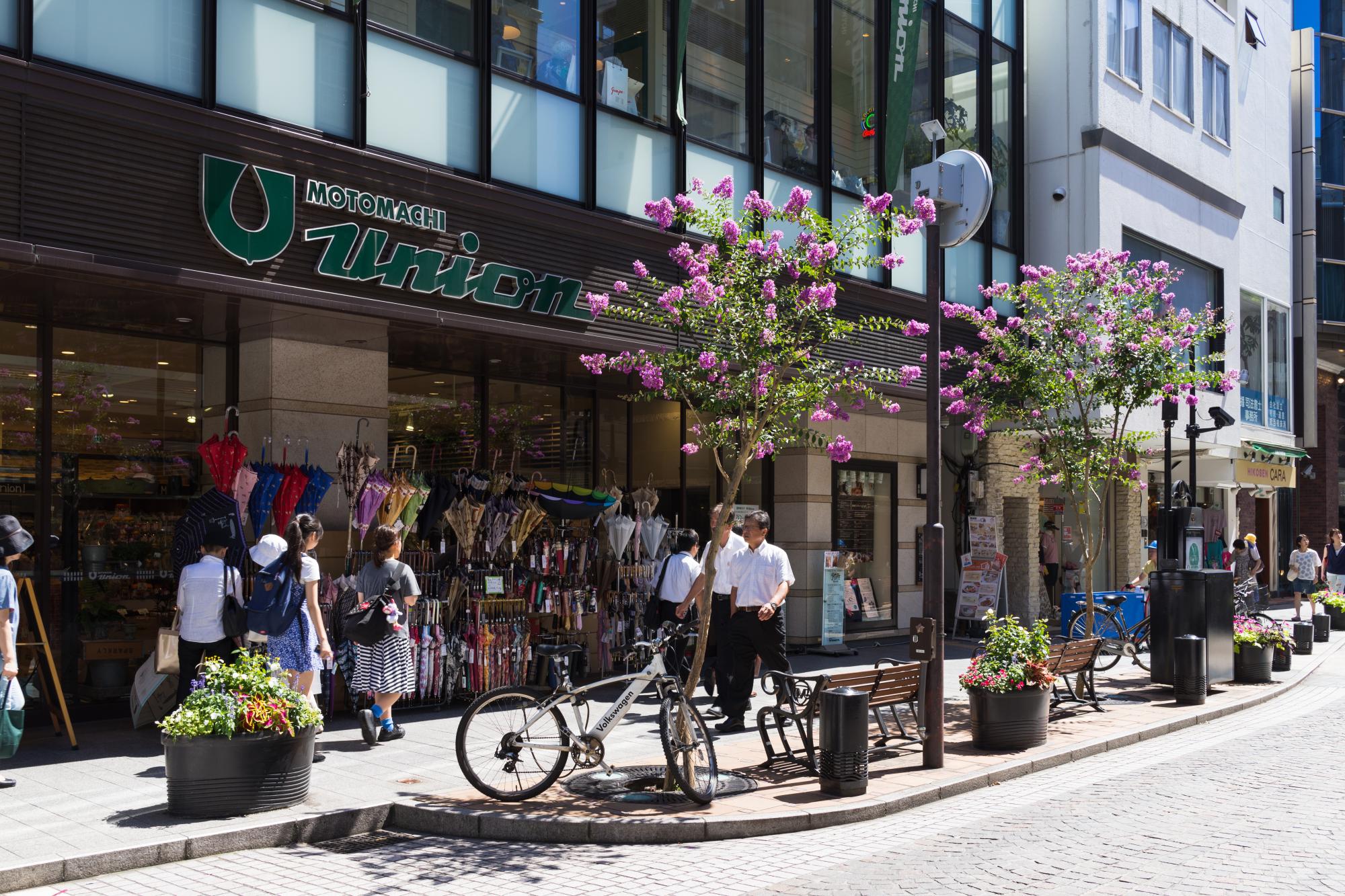 Motomachi Union is a supermarket popular among local people. They have many high-quality and overseas food that is hard to find anywhere else in Japan. Their eco-bags are popular as well. 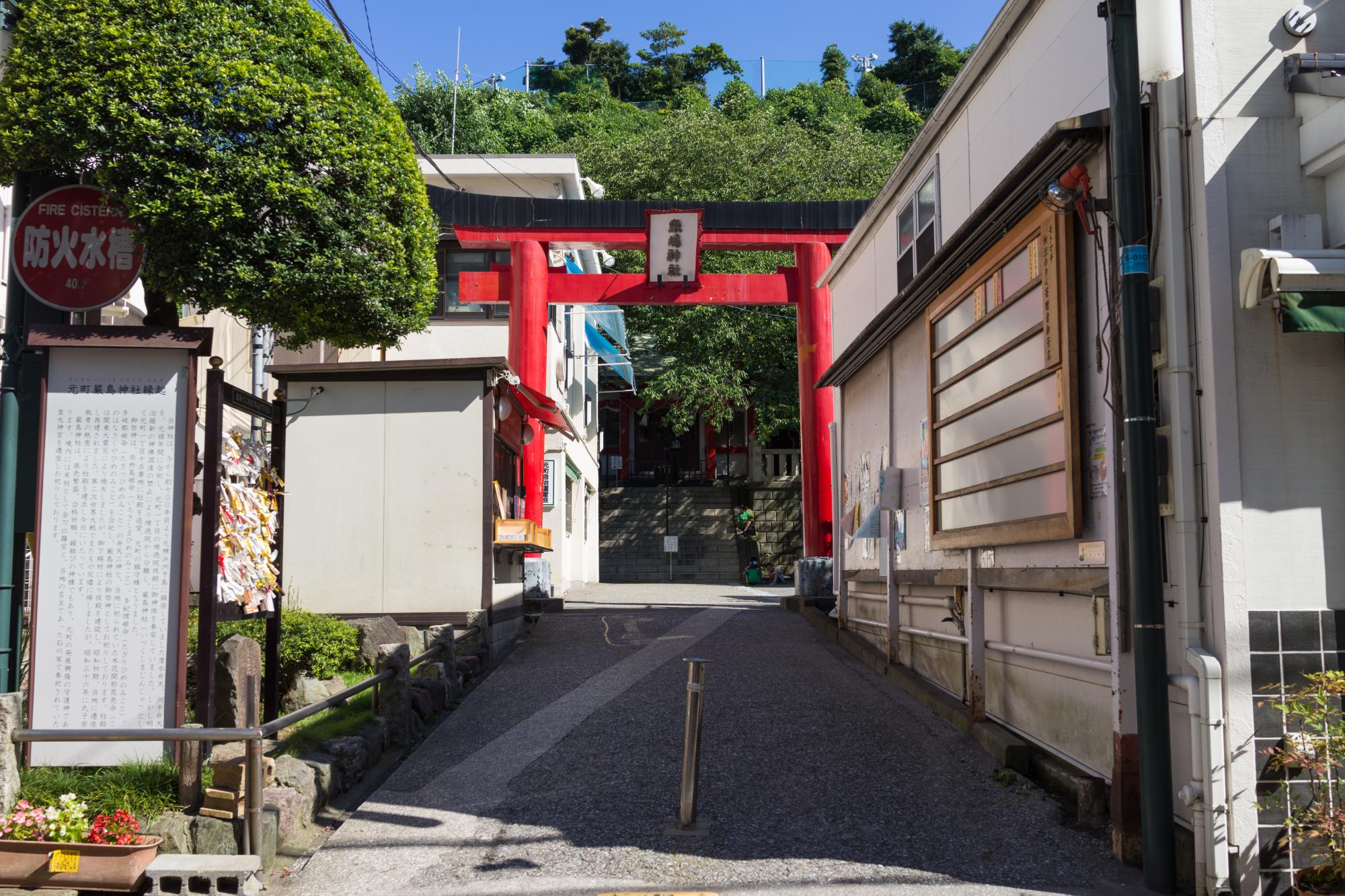 Motomachi Itsukushima Shrine is the tutelary shrine of Motomachi. The shrine is believed to grant a thriving business, academic achievement and matchmaking. It is a purely Japanese space, which is quite rare in Motomachi. The shrine that was originally located in present-day Kannai district was moved to the current site in 1869. A small park is located beside the shrine and many local children play there. 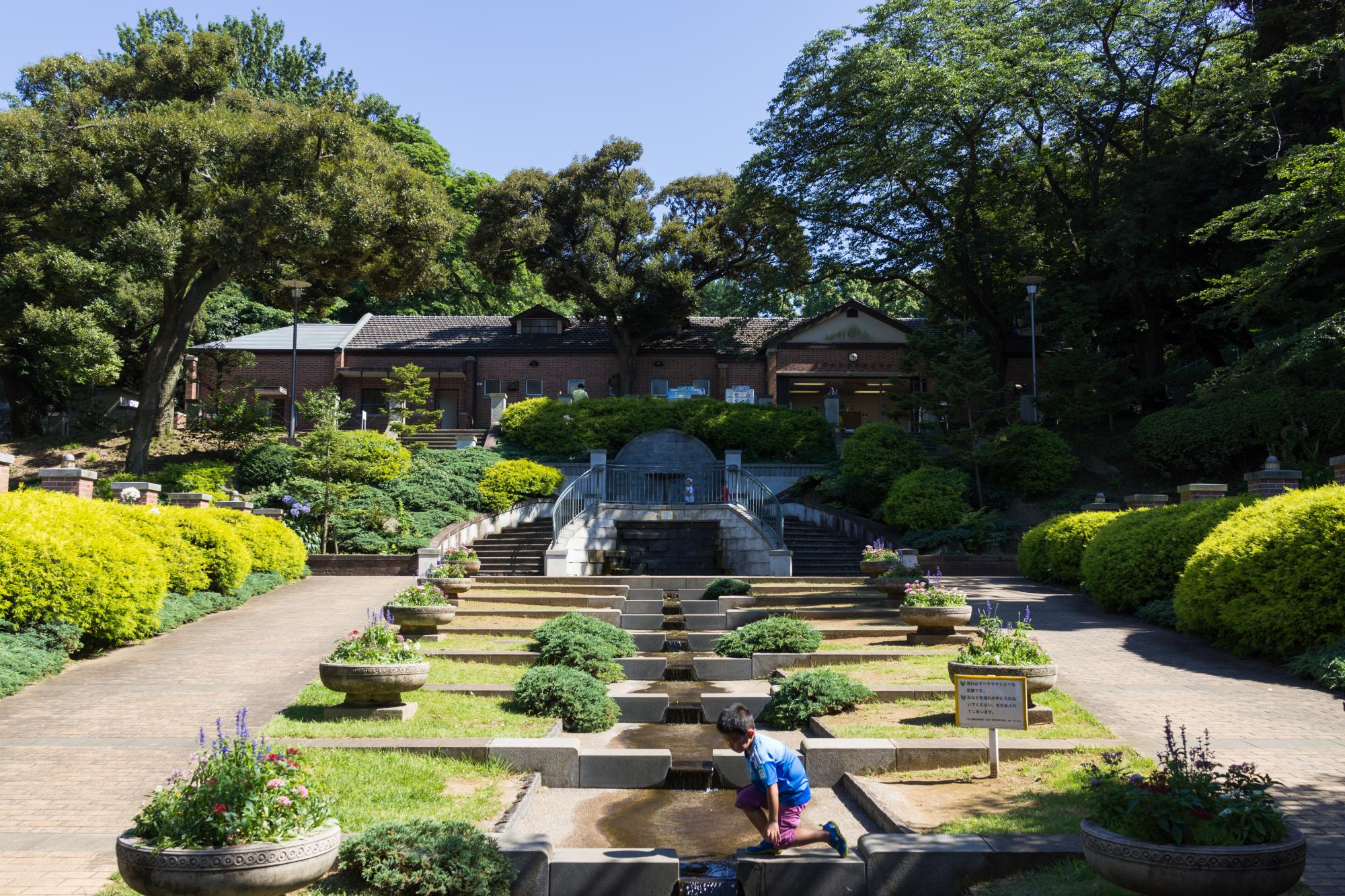 Motomachi Park was constructed on a valley. It is a tranquil park, full of green scenery; perfect for taking a leisurely stroll on a nice day. There is also a pool located in the park for a quick dip in the summertime! For people trying to go to Yamate district, simply go up the hill in the park. 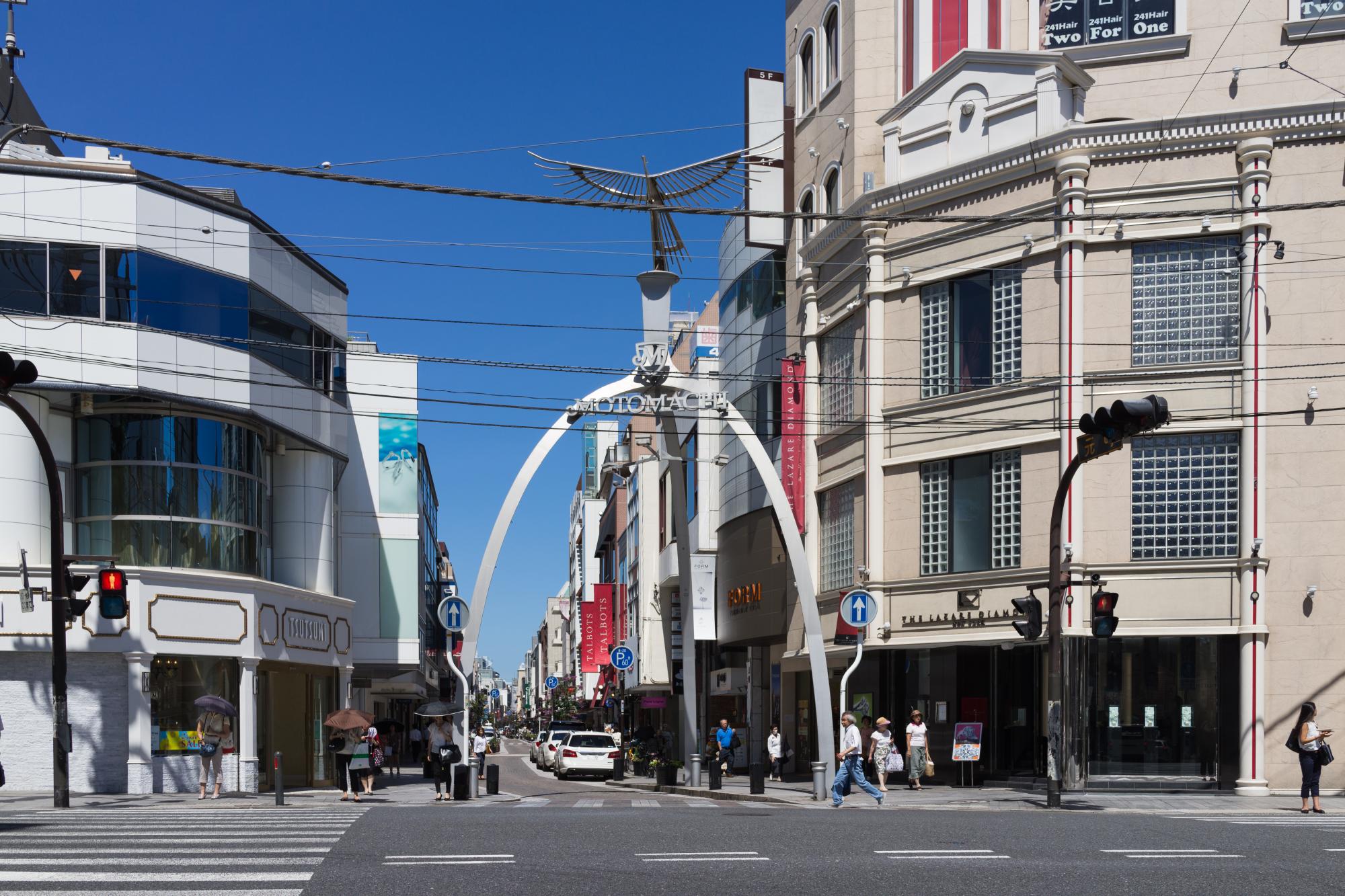 Phoenix Arch (the entrance on the Ishikawacho station side) 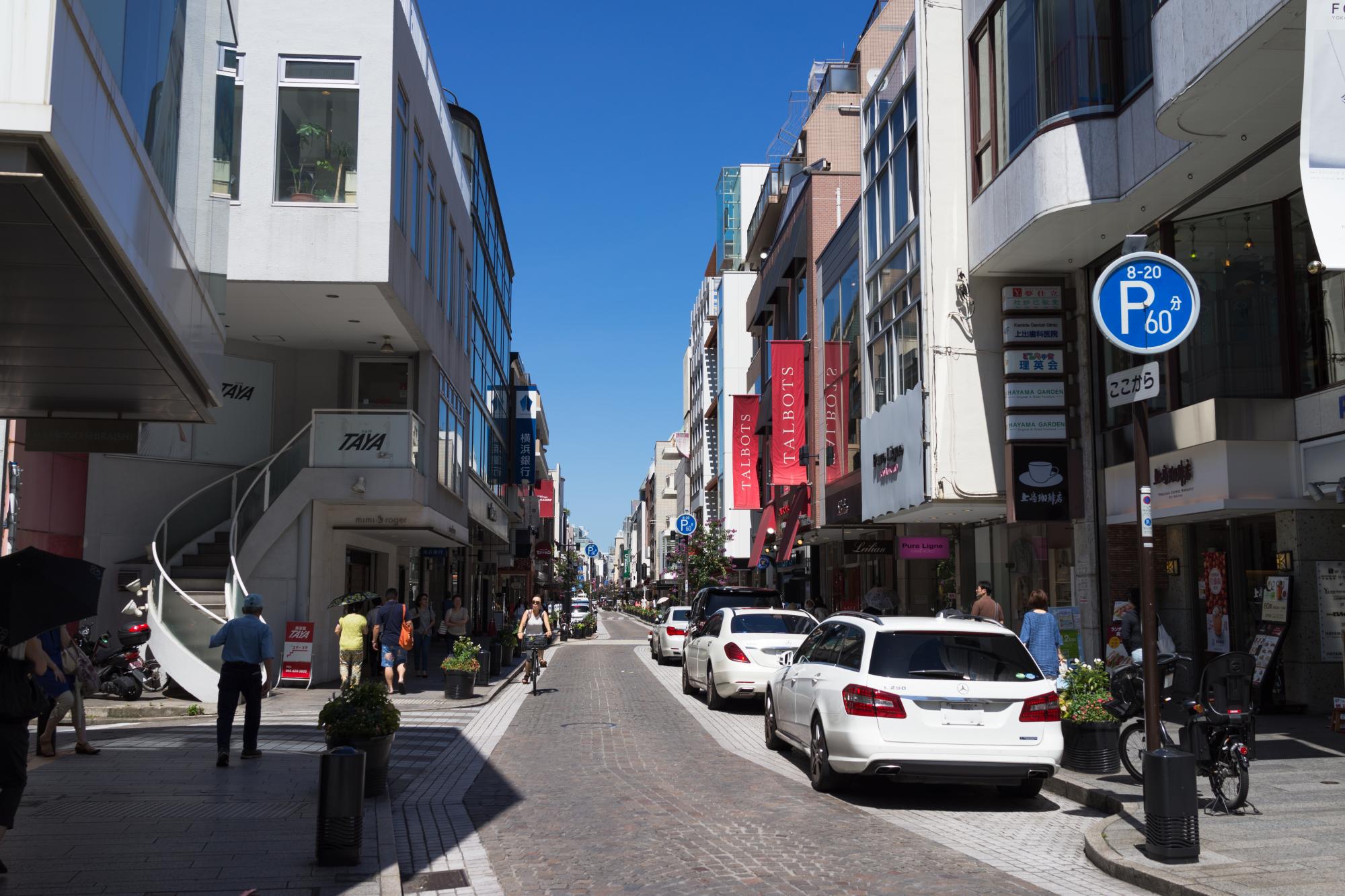