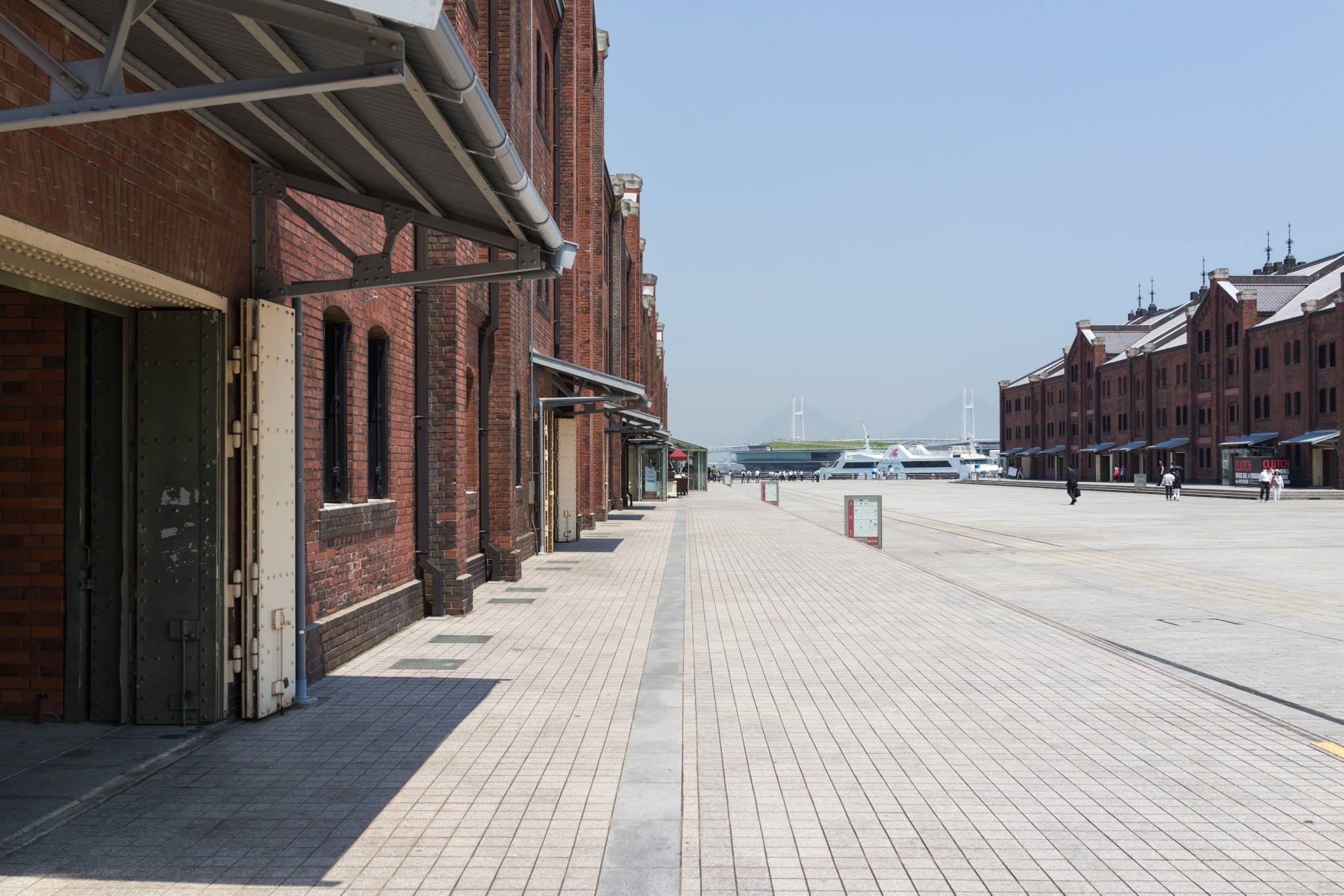 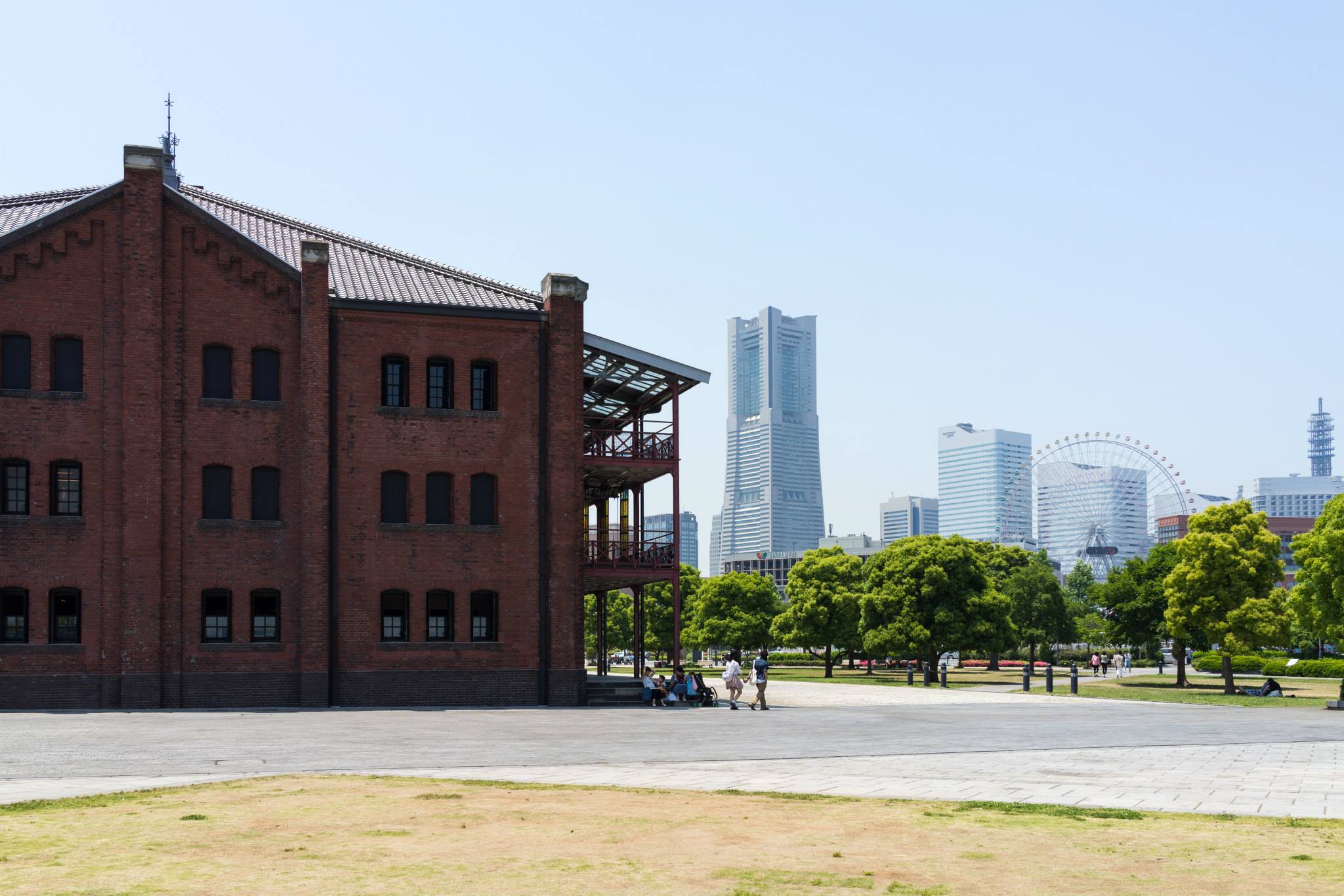 Yokohama Red Brick Warehouse and the skyscrapers in Minatomirai district

The Yokohama Red Brick Warehouse consists of 2 red brick buildings in the Minatomirai district of Yokohama. They are magnificent historical buildings originally used as Customs warehouses. Nowadays the 1st building is used as a cultural facility and the 2nd is used as a commercial facility (there are commercial tenants in a part of the 1st building too). In the cultural faculty, many various interesting exhibitions are held and many of them are free of charge! Most of Yokohama's Red Brick Warehouse contains restaurants and shops, and you can enjoy certain aspects of Yokohama or Japan in many of them.
The area around Yokohama Red Brick Warehouse is called "Akarenga Park". It is a wide-open area where you can enjoy a fantastic view of Yokohama Port. Additionally, visitors can board the "Sea Bass" (a sightseeing boat) in the park. Many people come to the park for the various events that take place throughout the year. The Yokohama Red Brick Warehouse is a place that is packed with history! Getting to know Yokohama through the area is sure to be interesting! 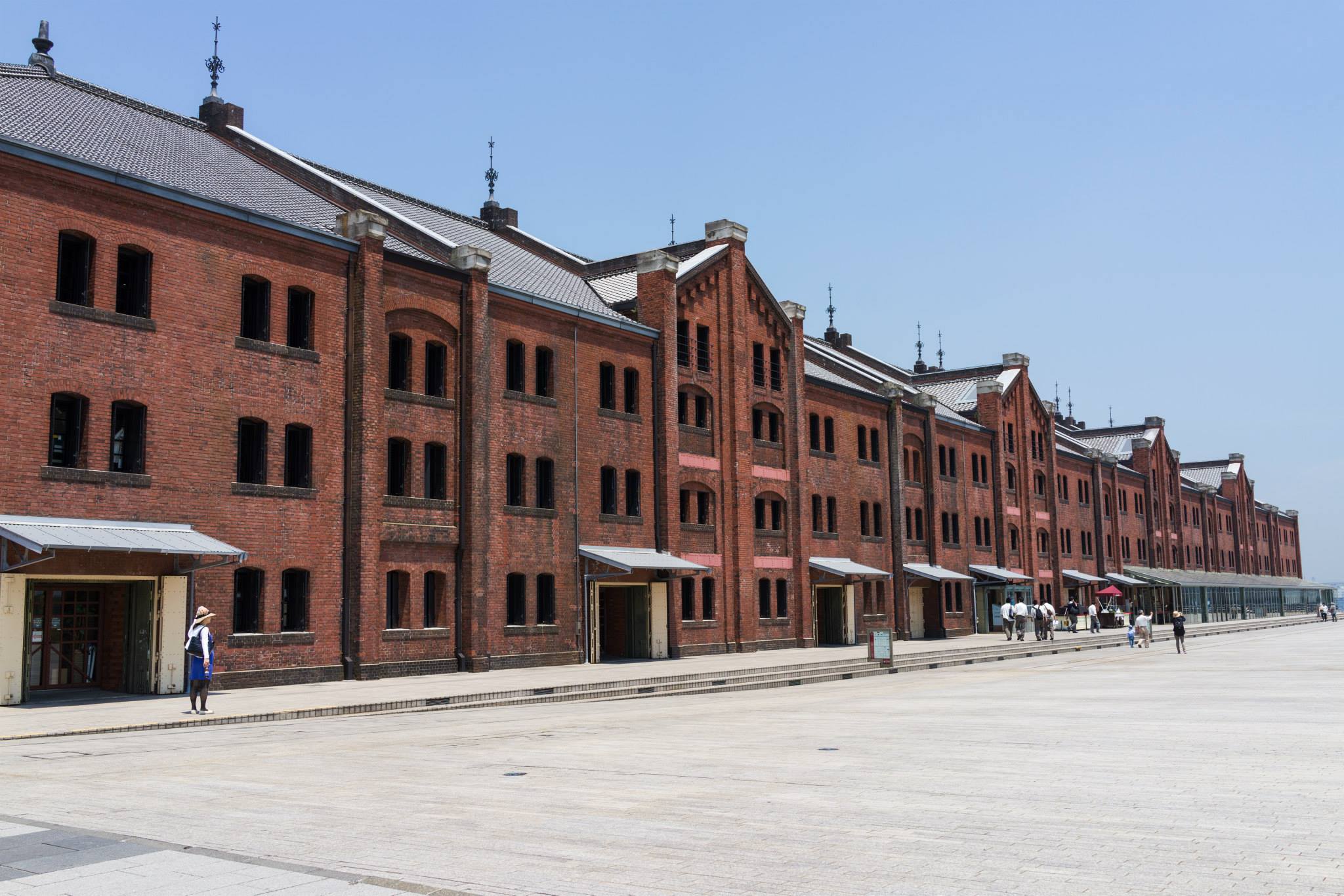 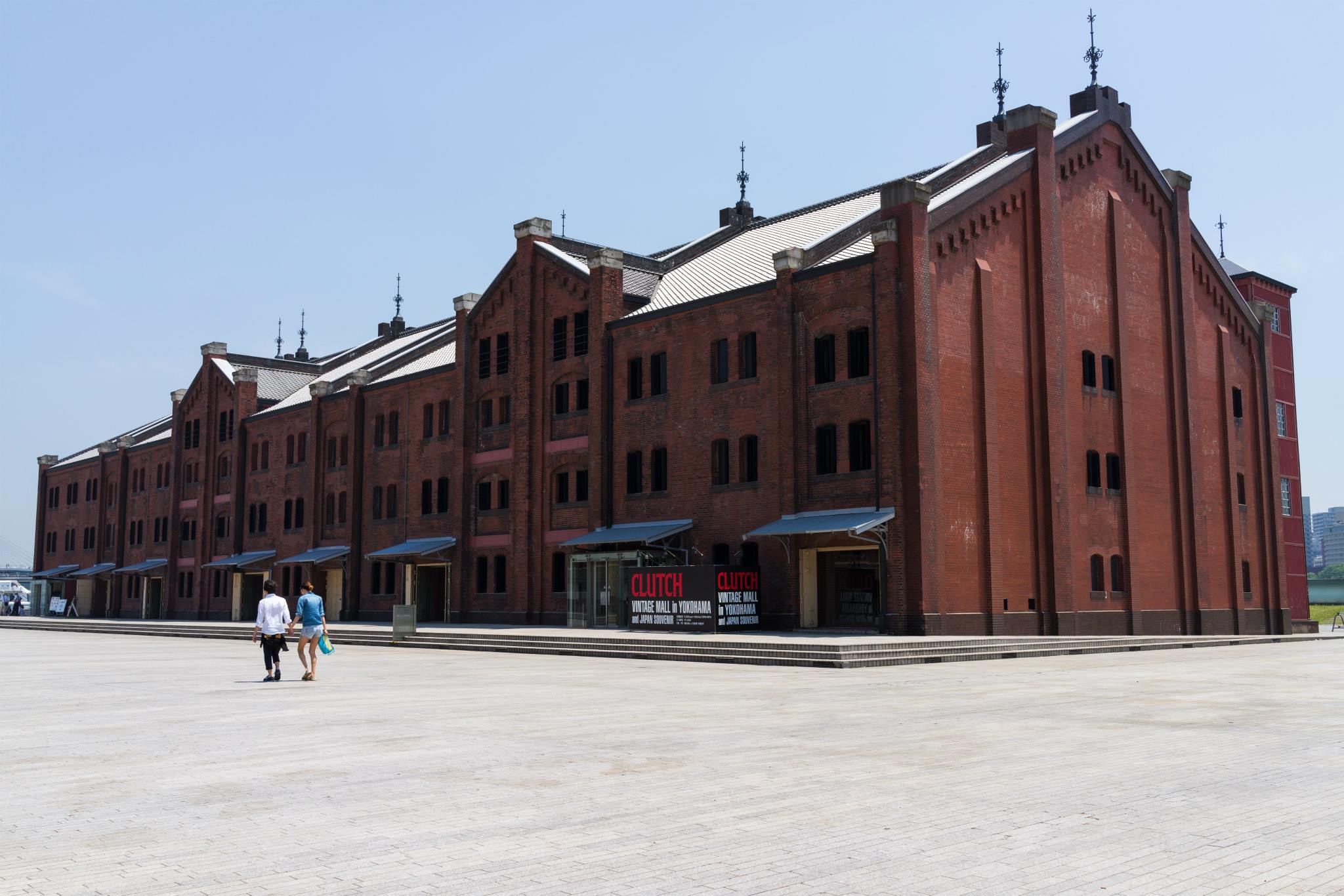 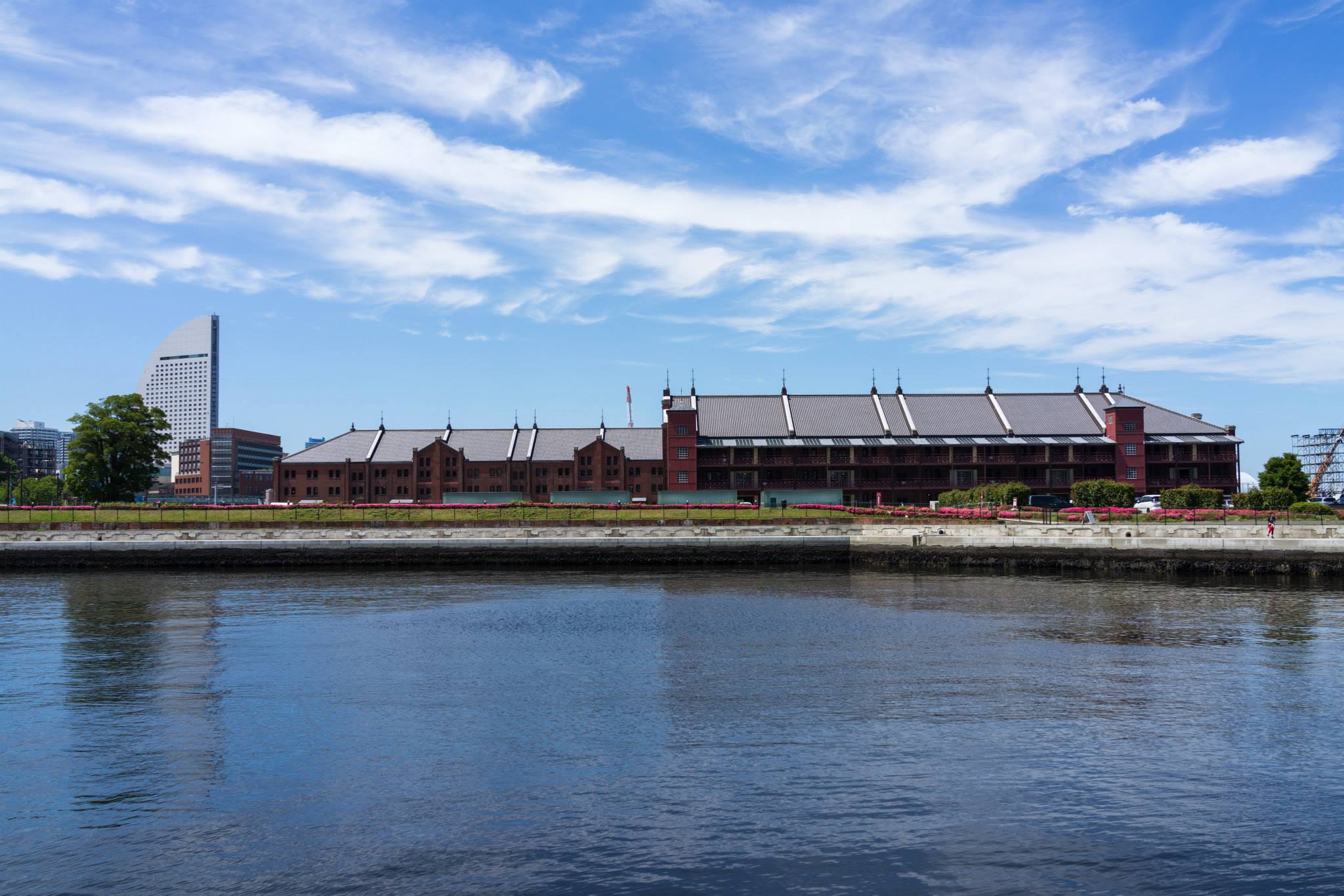 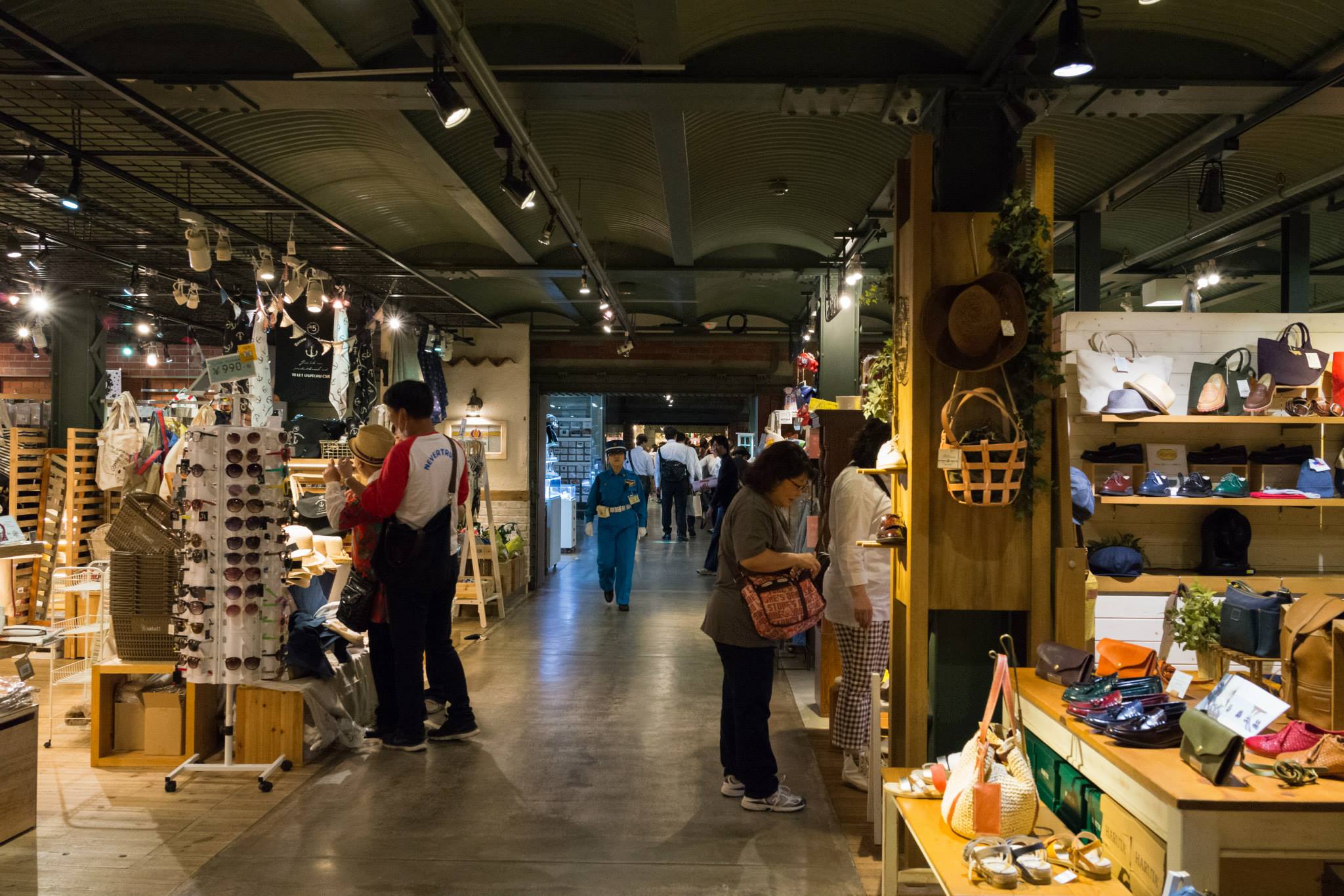 The inside of Yokohama Red Brick Warehouse

There are many places to shop and enjoy various foods in the Yokohama Red Brick Warehouse. The following restaurants and shops are places that I recommend to get a little taste of Yokohama/Japan. 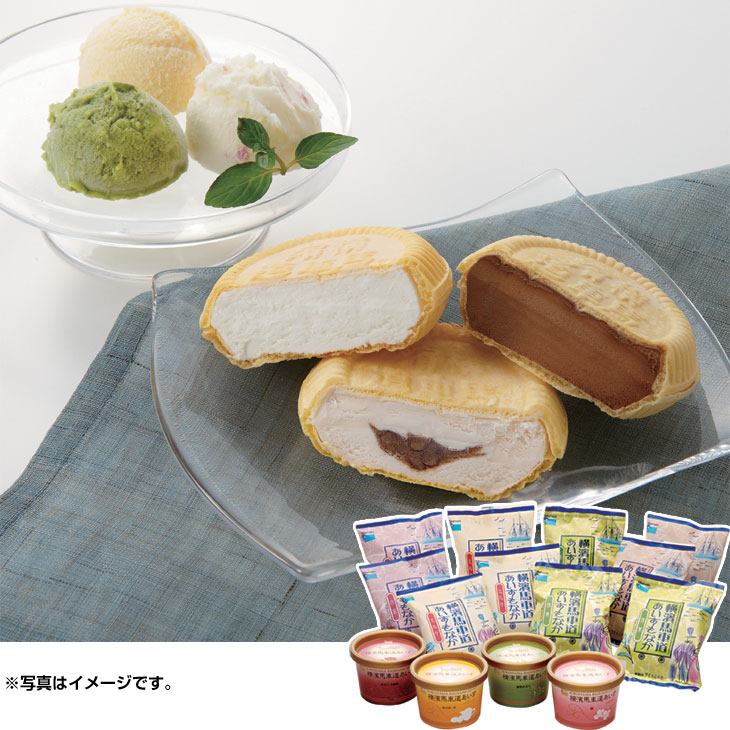 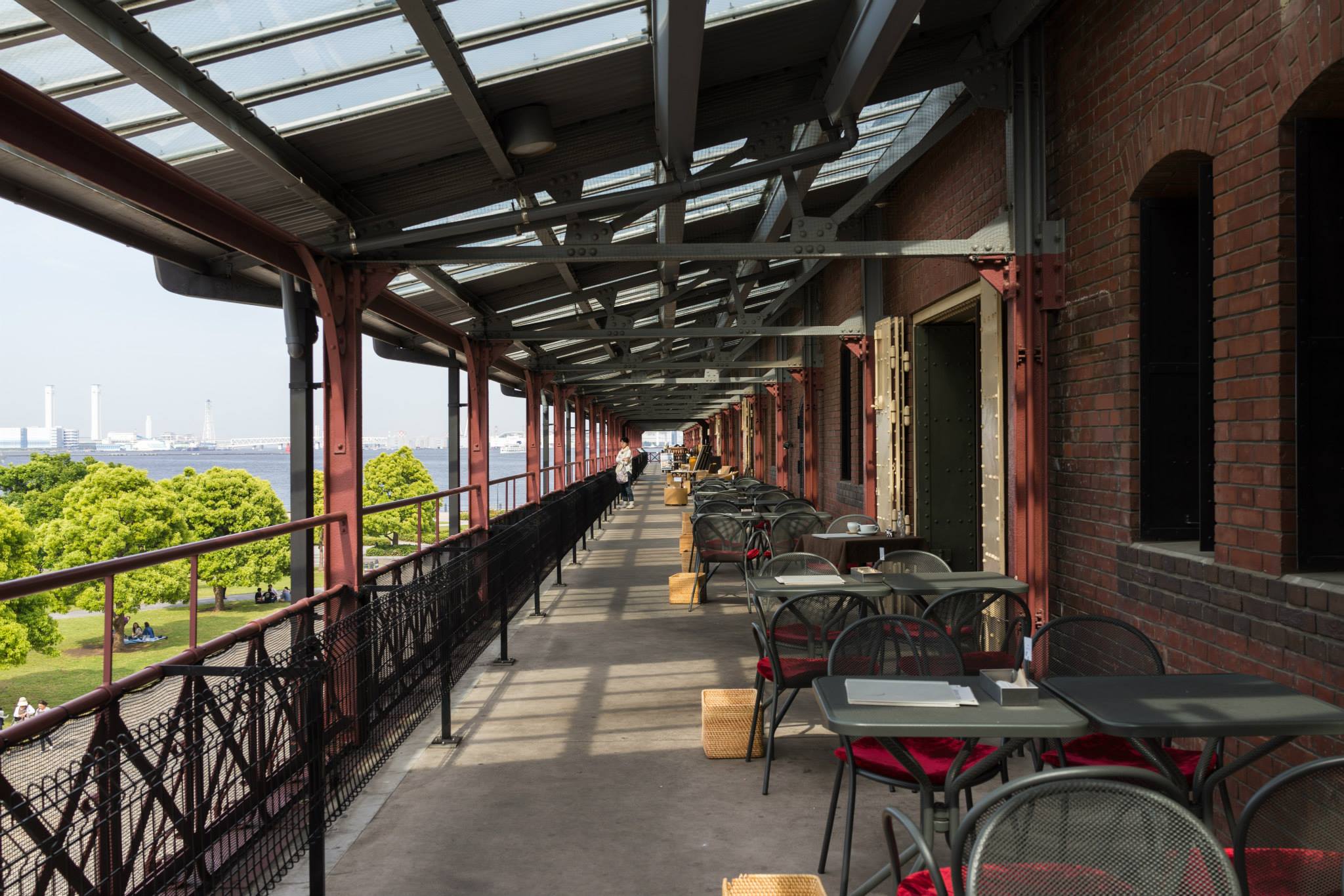 Seats on the balcony 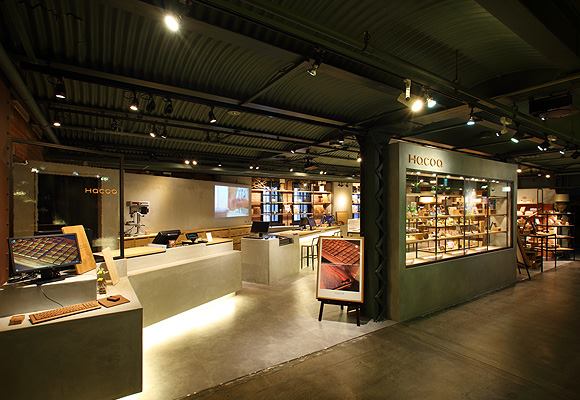 Hacoa; quoted from the official site

Since the opening of the port in 1859, Yokohama has been influenced by cultural ideas and products from all over the world. The Japanese people have taken these ideas and products and transformed them into something uniquely Japanese. Take for example Yoshoku (western style foods). They are western style foods with a unique Japanese twist to them. There are many western style restaurants in Yokohama. You can eat Yoshoku such as omelet rice, curry and rice, and tonkatsu (pork cutlet) in the Yokohama Red Brick Warehouse. There are also some uniquely Japanese sweets as well. You can enjoy castella (sponge cake) and ice monaka (ice cream in wafers) among other things too.
Kiyoken Shumai is the specialty product of Yokohama. Though it is based on Chinese dumplings it features ingredients made of a mixture of pork and dried scallop in bite-size pieces. Yokohama citizens love their Kiyoken Shumai!
Yokohama also happens to be the birthplace of beer in Japan and the Kirin Brewery Company, a major brewery in Japan was established in Yokohama. At "Beer Next" you can enjoy special beer brewed only in Kirin Yokohama Beer Village. 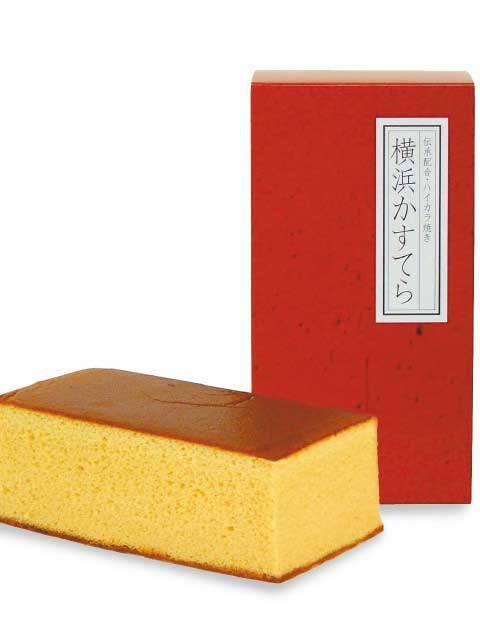 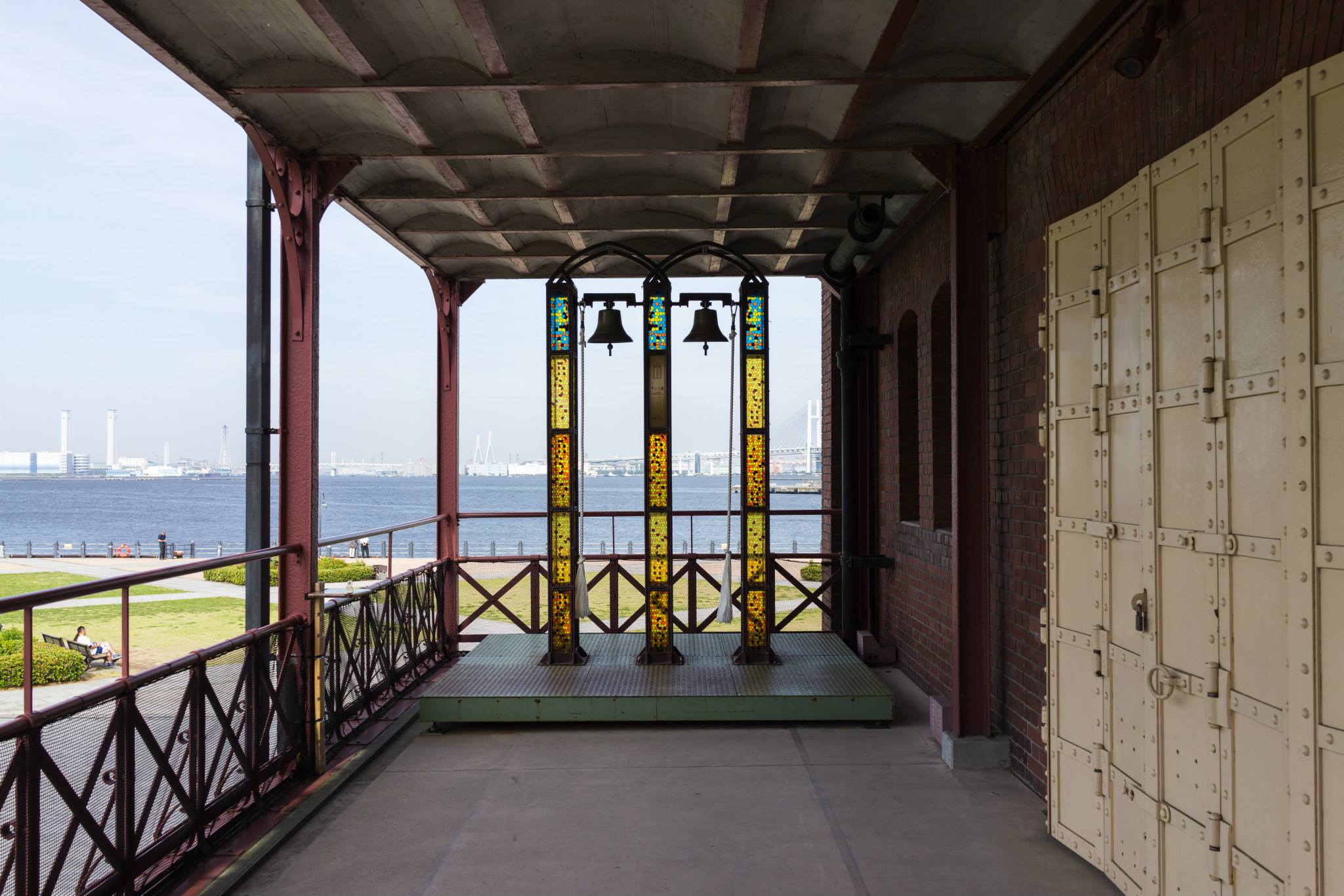 On the seaside balcony of the 2nd floor in the 2nd building, there are two bells called “Bells of Happiness”. It is said that a couple that sounds the bells can stay eternally happy. Be sure to give it a ring if you ever come to visit with your boyfriend or girlfriend. 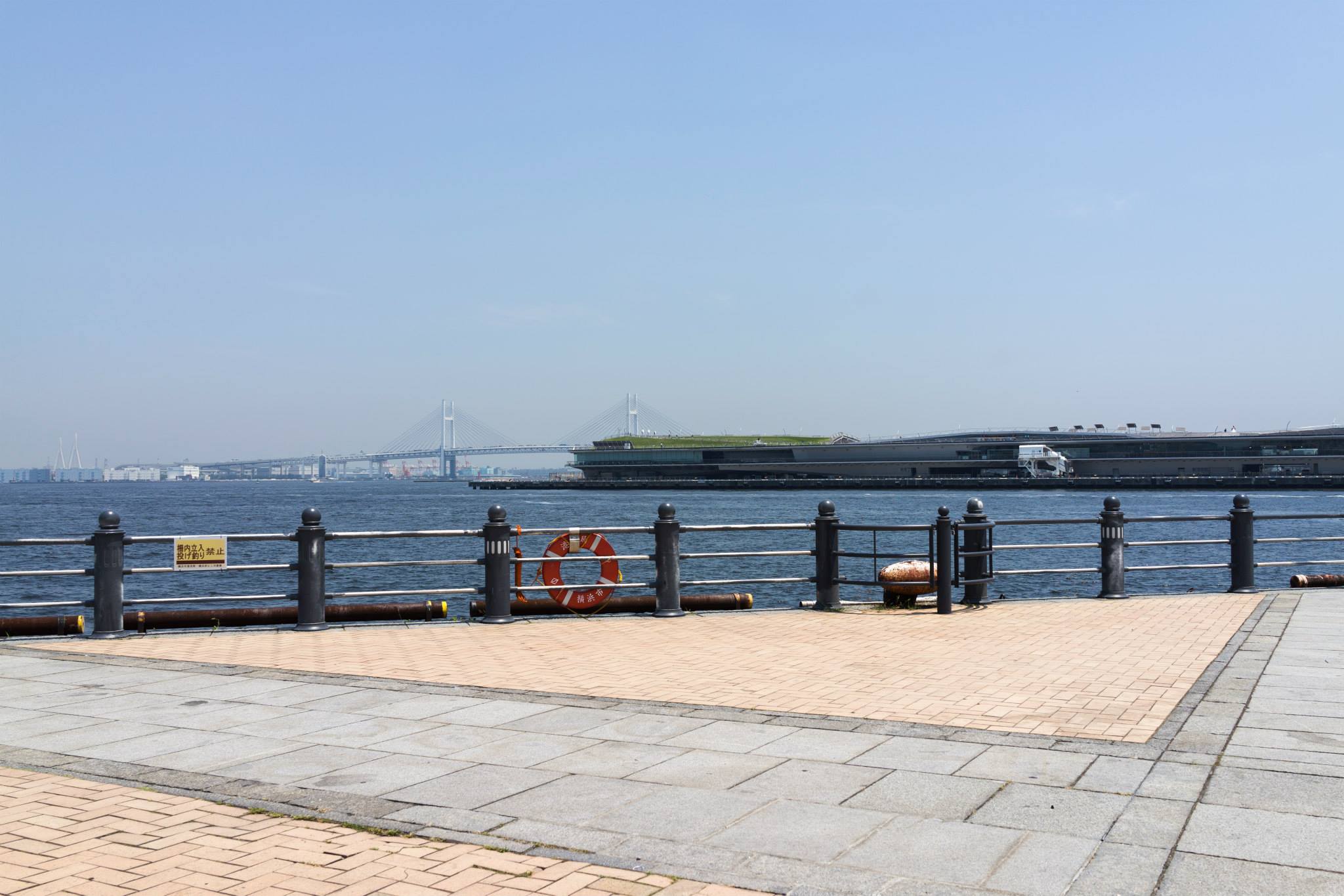 The view of Osanbashi Pier, the Yokohama Bay Bridge and Yokohama Port

Around the Yokohama Red Brick Warehouse, you will find Akarenga Park, a scenic place where you can catch a great view of Osanbashi Pier, the Yokohama Bay Bridge and Yokohama Port. There is a special spot in the park where you can see all of the Yokohama Three Towers at the same time. There are only 4 spots like it and it is said your dreams will come true if you visit all of them! If you wish to go to Yamashita Park, Minato Mirai 21 Central District (Rinko Park) or the east exit of Yokohama Station (Yokohama Bay Quarter), there is a sightseeing boat called "Sea Bass" located in the park. 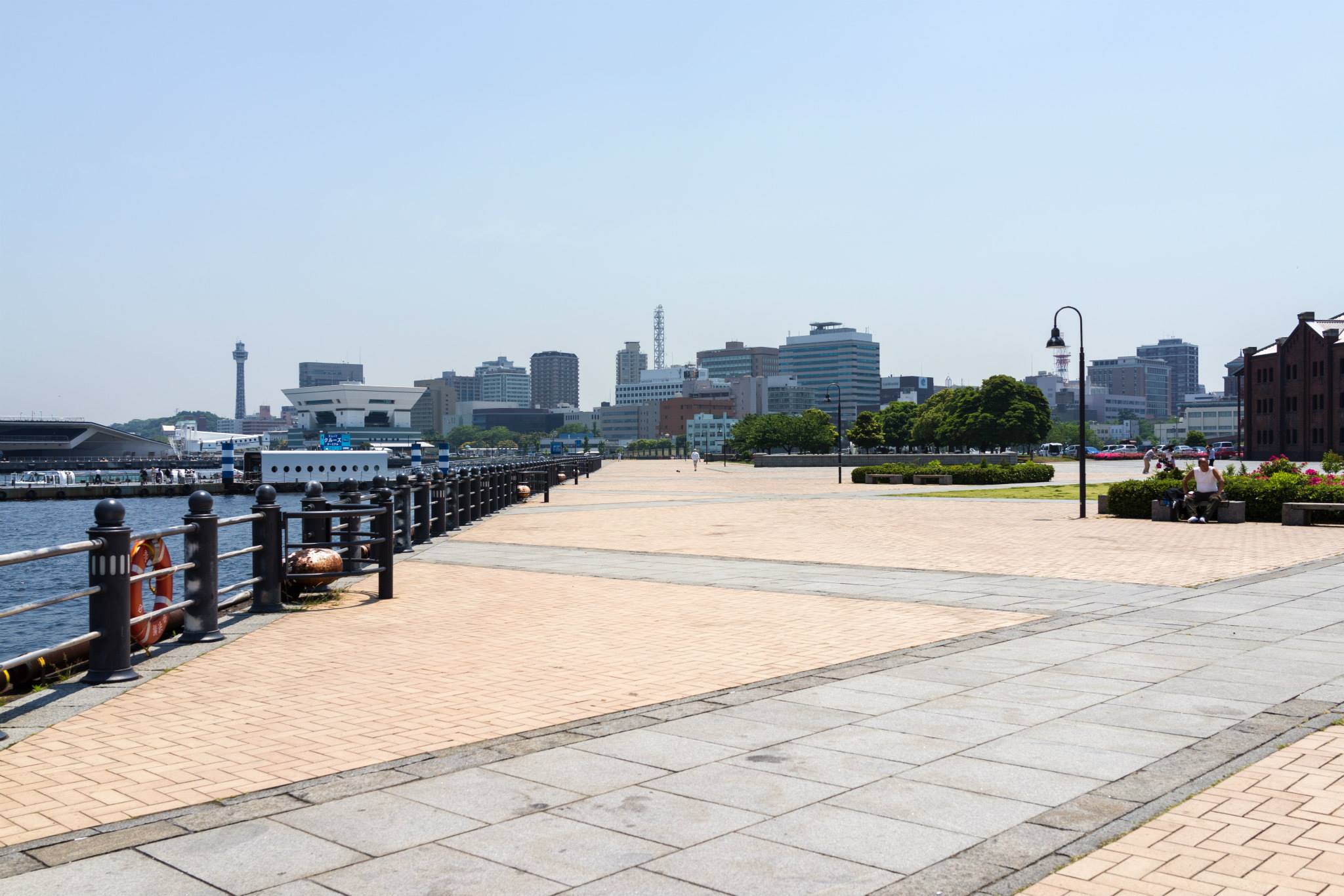 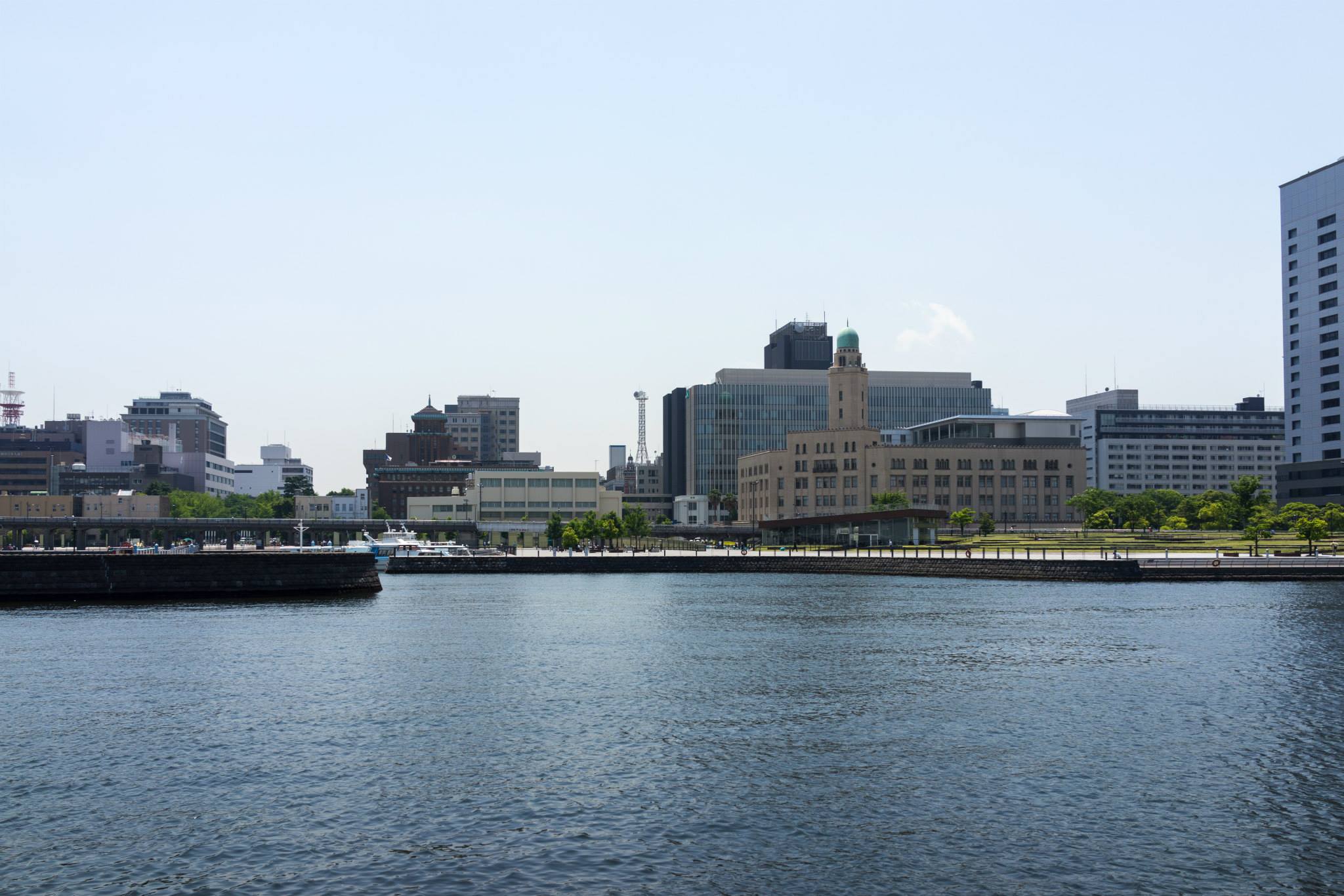 The view of Yokohama Three Towers 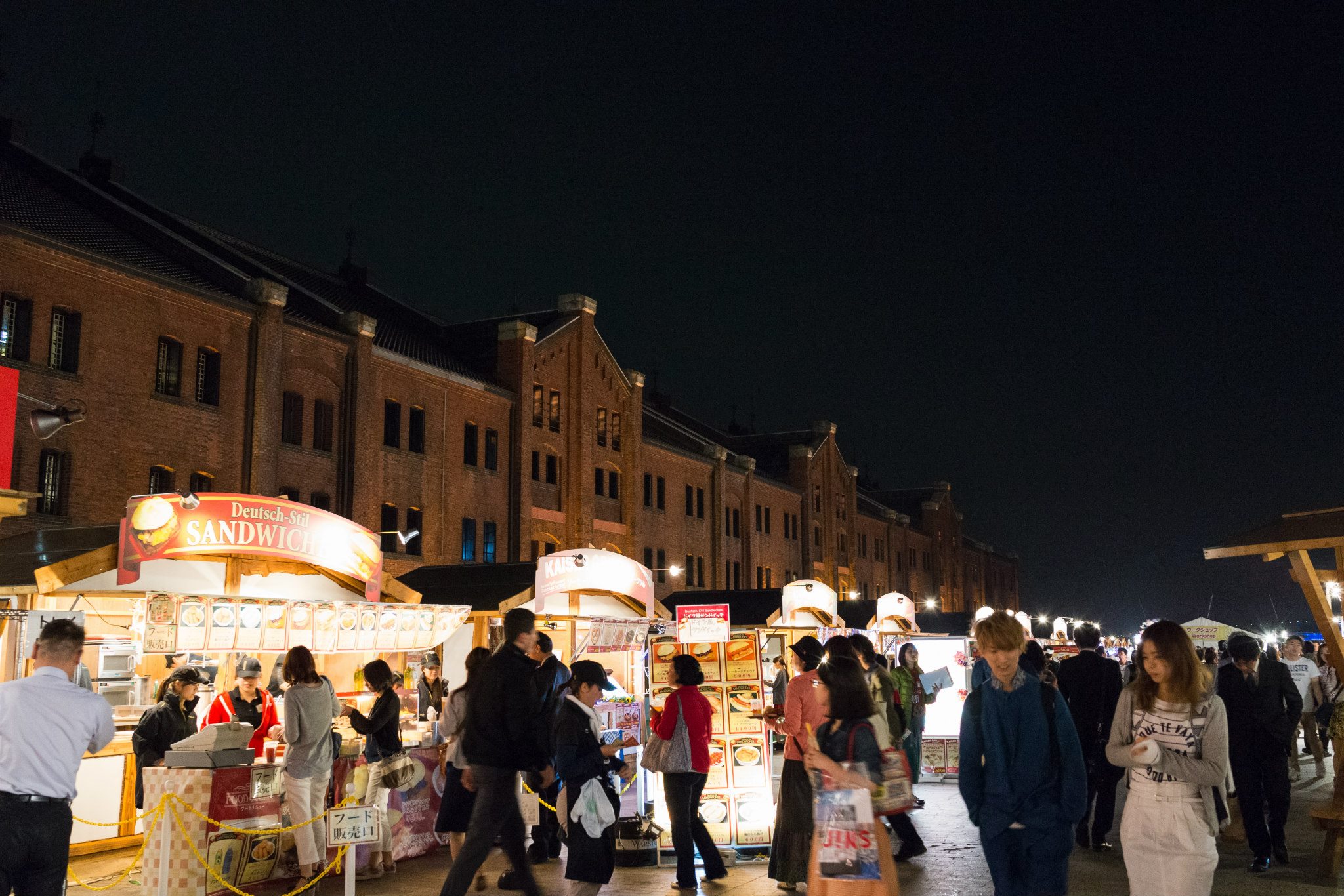 Because Akarenga Park is so large, various events are held in the area throughout the year. Flower Garden, Levolant Cars Meet, German beer festivals such as Oktoberfest and Fruhlingsfest, an Art Rink (art and ice skating) and illumination events are held in the park. During the events the park is filled with people from all over!

Finally I would like to introduce the history of Yokohama Red Brick Warehouse. It is very fun to understand it because you can find the history of Yokohama on the whole.
Lastly, I would like to introduce the history of Yokohama Red Brick Warehouse. It is a very interesting place because so much of Yokohama's history is contained within the two buildings.
After Yokohama Port opened in 1859, there was an urgent need to develop modern port facilities to cope with the rapidly increasing amount of trade in the area. As a result, the first phase of harbor construction, mainly the construction of a steel pier (the predecessor of Osanbashi Pier) was carried out and finished in 1896. Shinko Wharf was constructed from 1899 to 1917 as the second phase of the project. Shinko Wharf was the first berthing wharf in an Eastern country and was a modern port facility with Customs warehouses (the present-day Yokohama Red Brick Warehouse), cranes, railways, the Yokohama Minato Station, etc. The Yokohama Minato Station was used not only as a freight station but also for passengers boarding the ocean liner. The 2nd building of the Yokohama Red Brick Warehouse was completed in 1911 and the 1st building was completed in 1913. Both were designed by Yorinaka TSUMAKI, one of the three major architects in the Meiji period (1868 - 1912). At the time they were cutting-edge warehouses equipped with an elevator and a sprinkler. It also featured the latest construction techniques such as the embedding of steel material into bricks. However when the Great Kanto Earthquake devastated Yokohama in 1923 the 1st building was partially destroyed in the process. That is why the 1st building is shorter than 2nd building. Additionally, the Custom House was completely destroyed and you can find the remains of it on the north of the Yokohama Red Brick Warehouse. After the quake Shinko Wharf supported development of Yokohama Port through World War II and the subsequent seizure of the U.S. Forces. 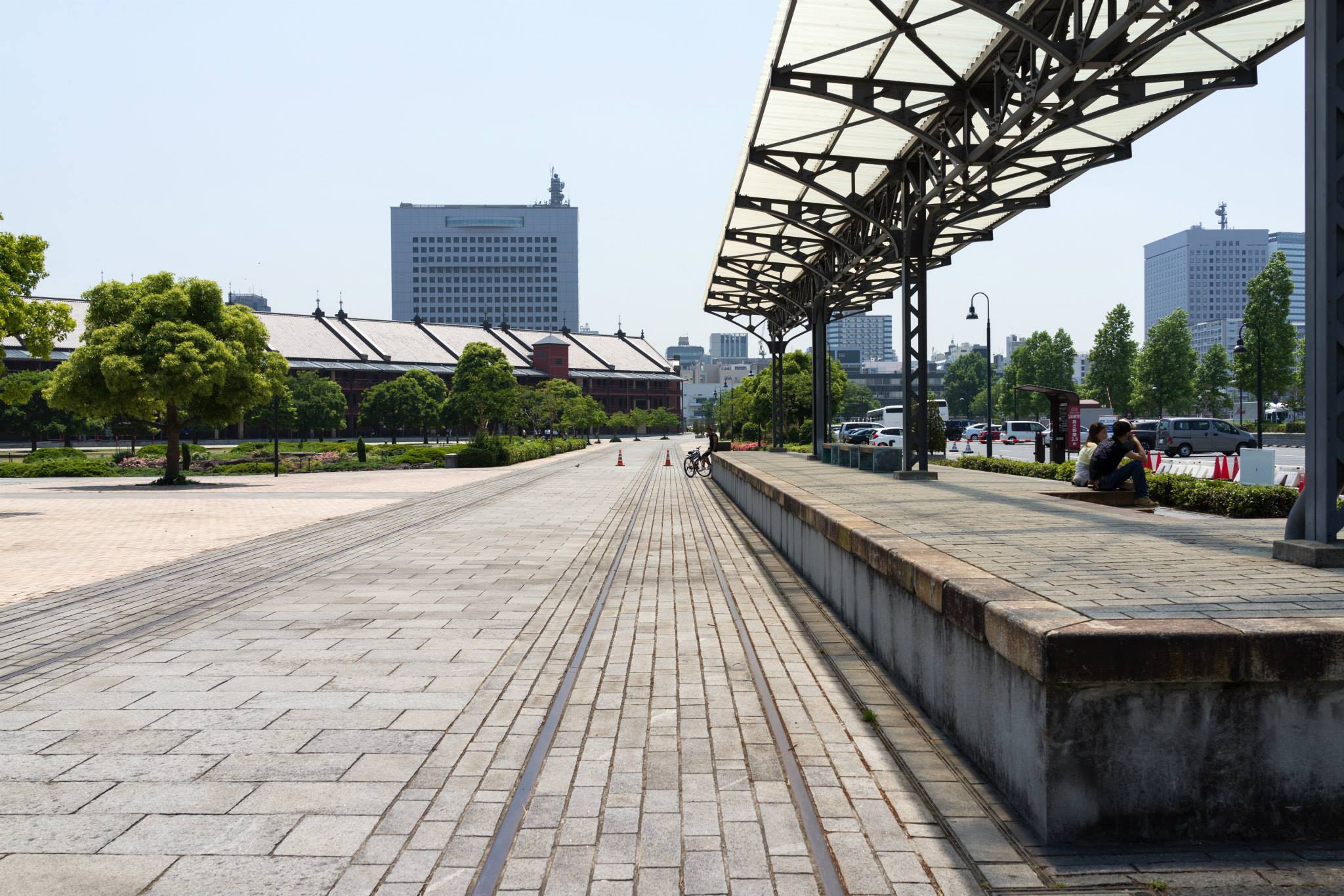 The remains of Yokohama Minato Station 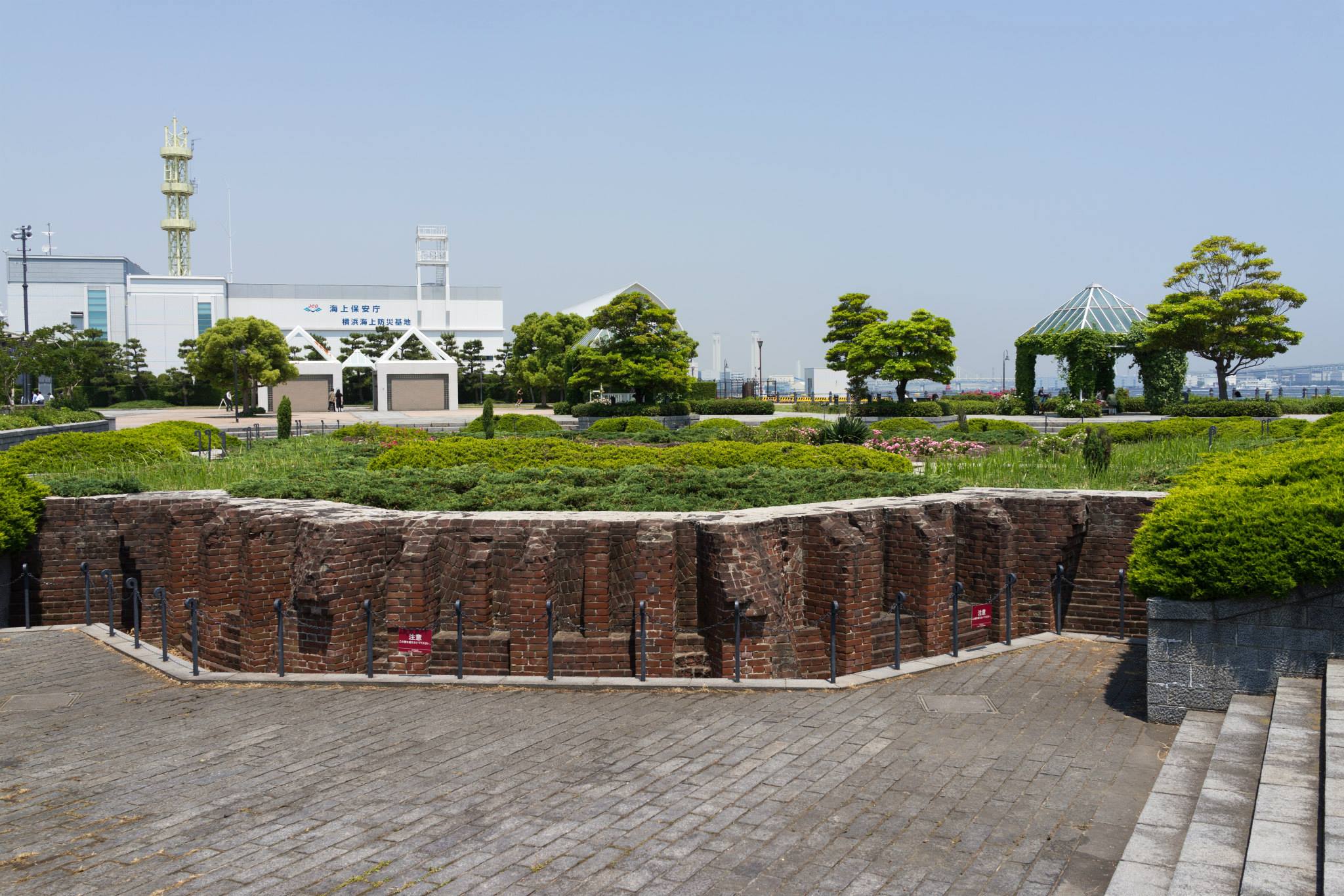 The remains of the Custom House

However when containership transportation became popularized in the 1970s, the center of trade in Yokohama Port shifted to Daikoku Wharf, Honmoku Wharf and Minami Honmoku Wharf, which were all able to accommodate container ships. The buildings finally ended their roles as Customs warehouses in 1989. Shinko Wharf was eventually developed as a sightseeing and commercial area under the redevelopment project in Minatomirai District and the Yokohama Red Brick Warehouse was renovated and reopened as a cultural and commercial facility in 2002. Today it is familiar to many people as one of the representative sightseeing spots in Yokohama. 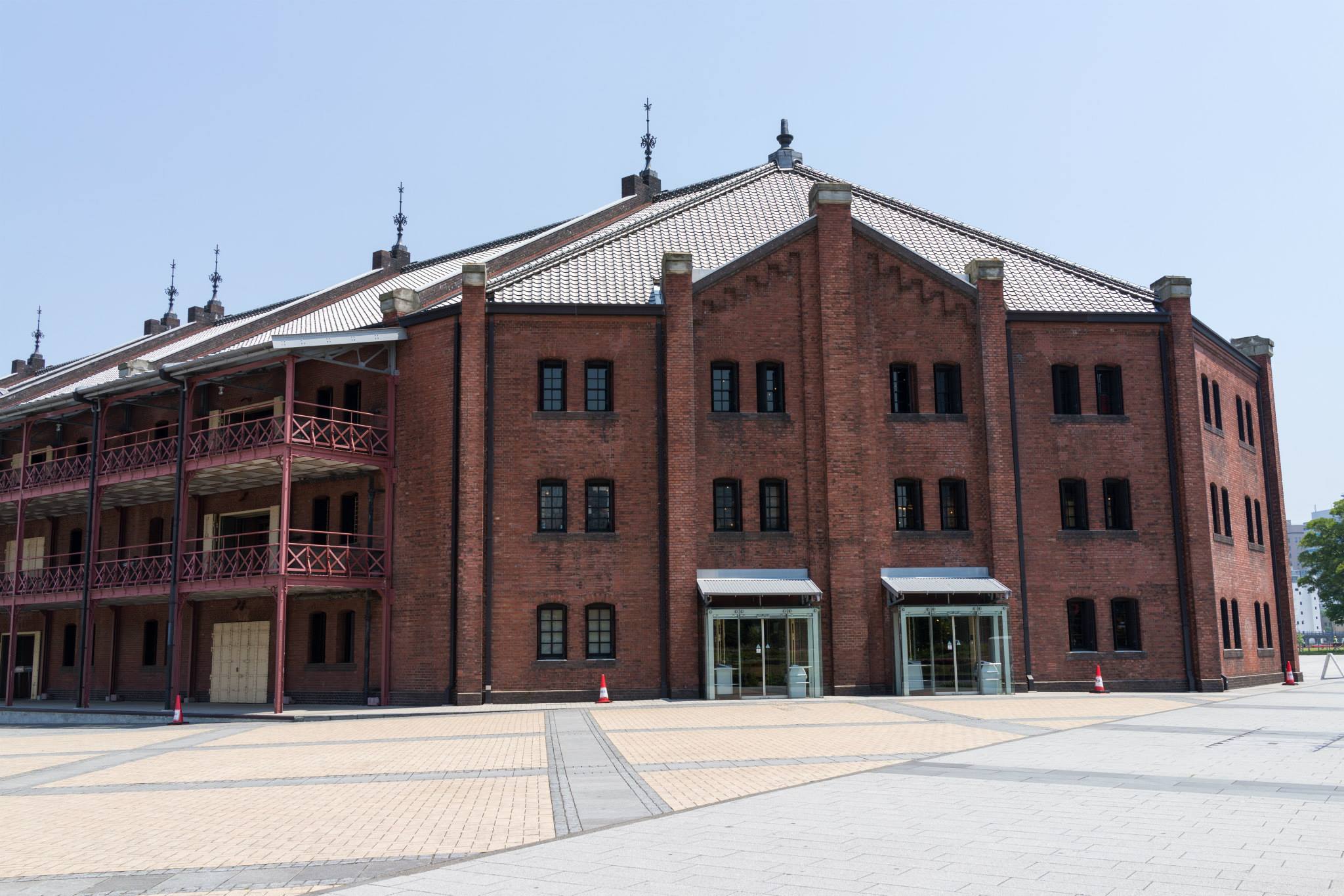 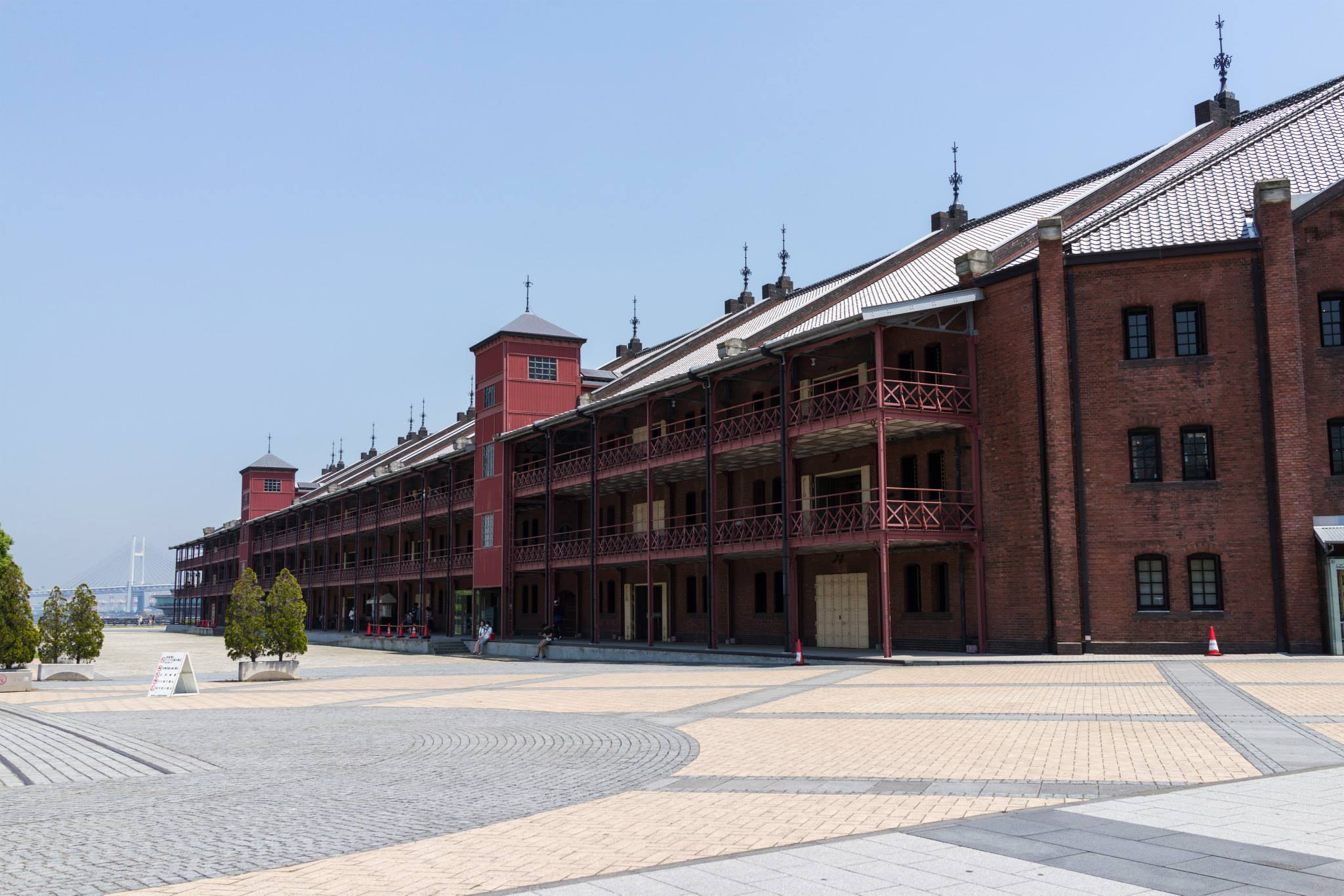