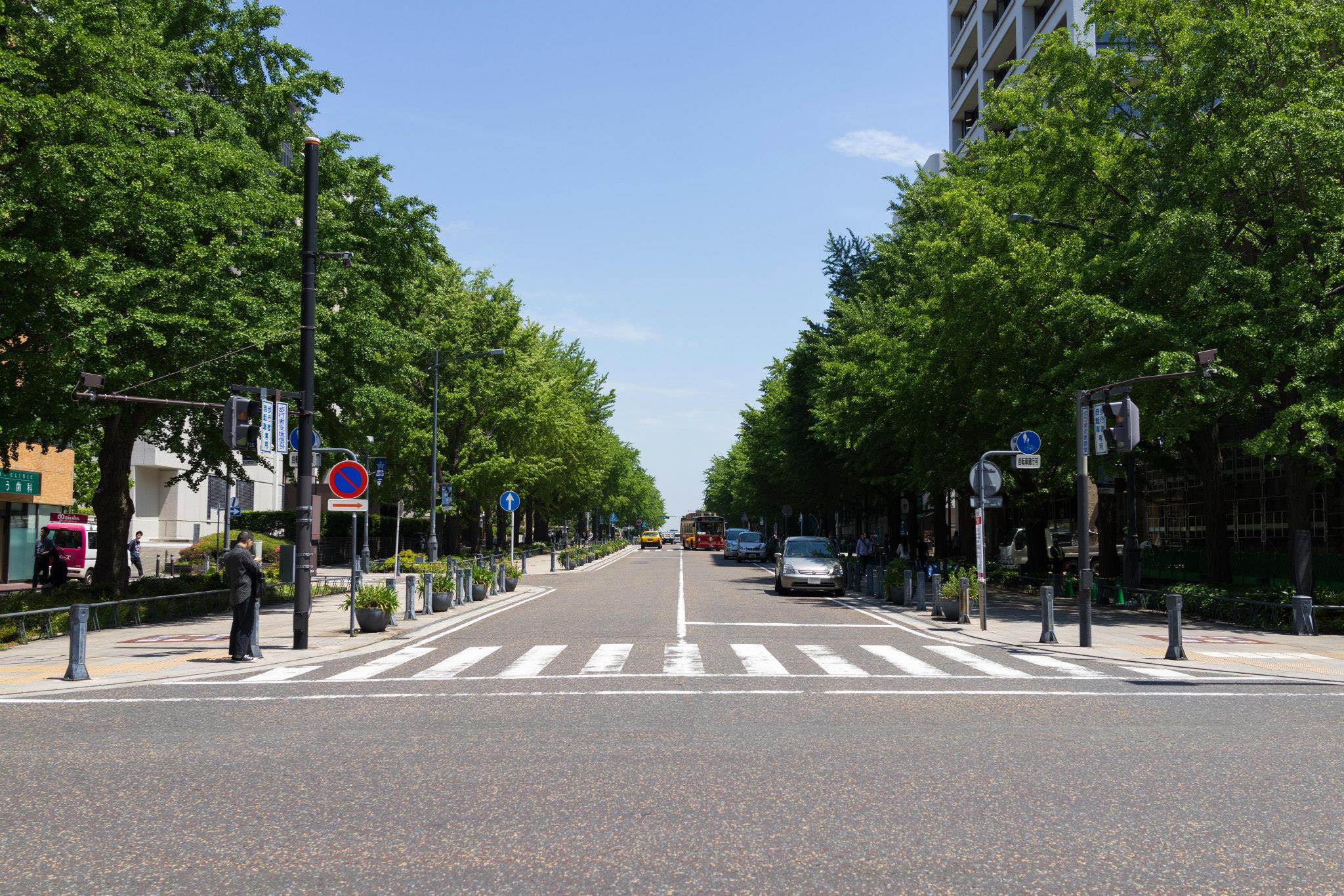 Nihon Odori Street is located in the Kannai district of Naka ward in Yokohama. It is an unusually wide and beautifully serene, tree-lined road about 400 meters, connecting Yokohama Park (which includes Yokohama Stadium) and Zou-no-hana Park, the location of the historic Yokohama Port. At the time of its construction, it was the first "western -style" street in all of Japan. With an unusually wide road width of 36 meters, the walk down the street is both beautiful and liberating. Many tourists take a camera with them on a stroll down the street because of the seemingly endless sight of gingko trees and numerous historical buildings that line the street. For a truly heart-fluttering experience, I recommend that you walk from Yokohama Park towards the port. One of the great things about Nihon Odori Street is that it's wonderful all year round! You can enjoy coffee and sweets outside in the cafes during the summertime, and colored leaves during autumn and magnificent illuminations await your eyes in the wintertime. In fact, the street is often used as a backdrop for many television dramas and commercials because of its exceptional scenery! 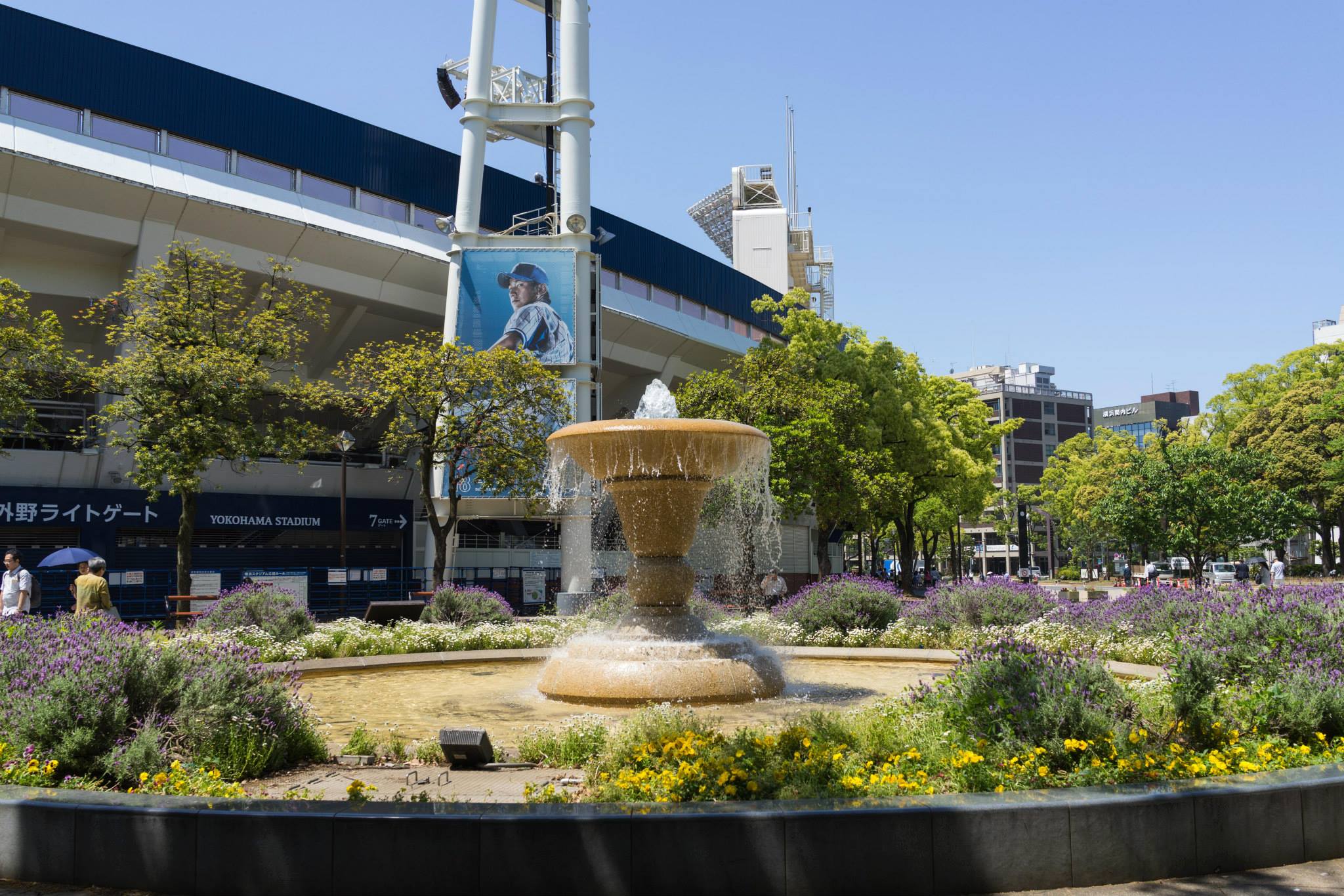 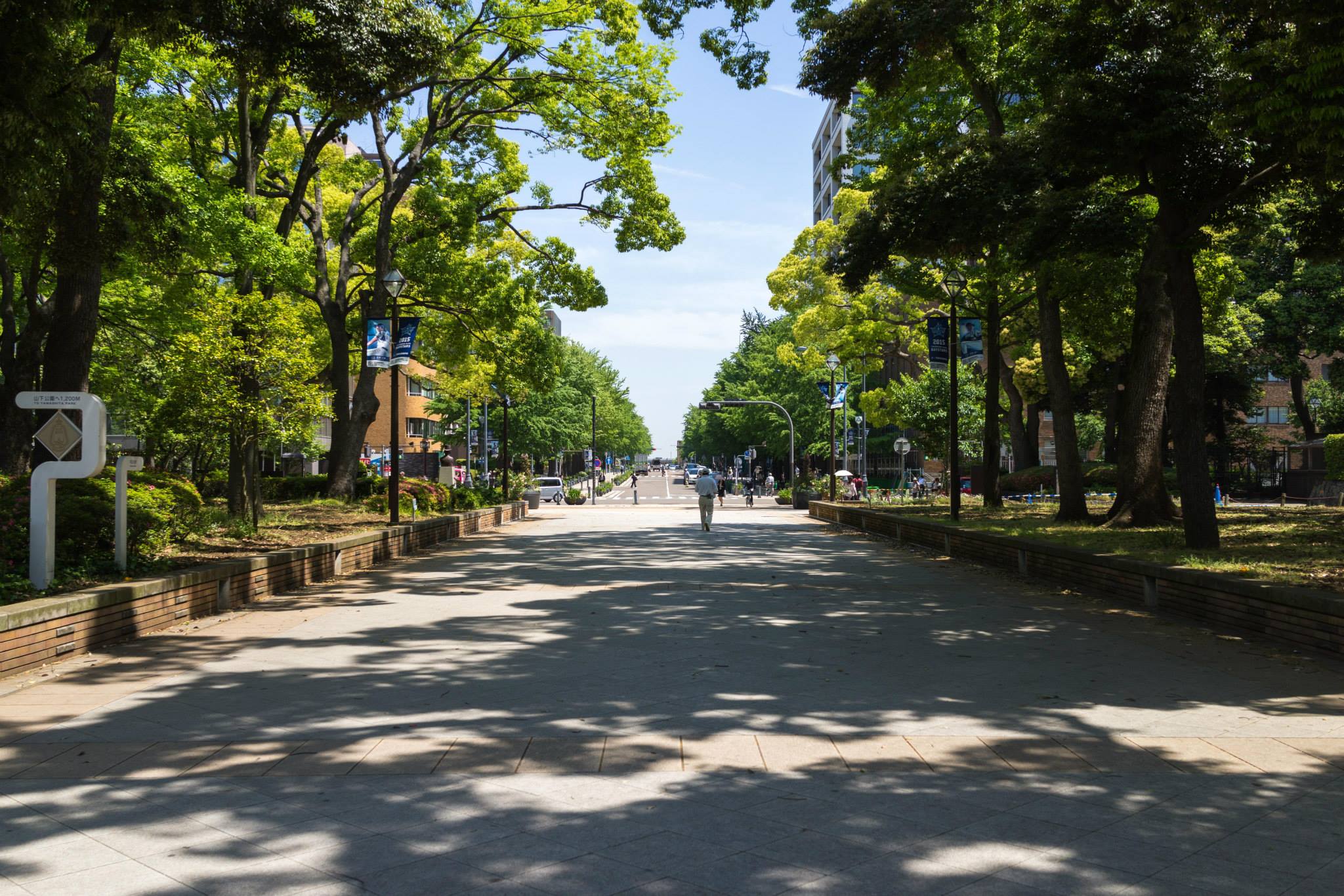 The view of Nihon Odori Street from Yokohama Park

If you were wondering why Nihon Odori Street has such a wide road width, there is actually quite a bit of history to it. When Yokohama Port was opened in 1859, the foreign settlement was established on the east side of the Kannai area and the Japanese settlement in the west side. After the town had a great fire in 1866 it was decided that a big street should be built in order to protect against fires occurring from either end of the Kannai area. The street was designed by British architect Richard BRUNTON, completed in 1870, and named "Nihon Odori Street" in 1875. Ever since its construction it has been known as the main street of Yokohama. 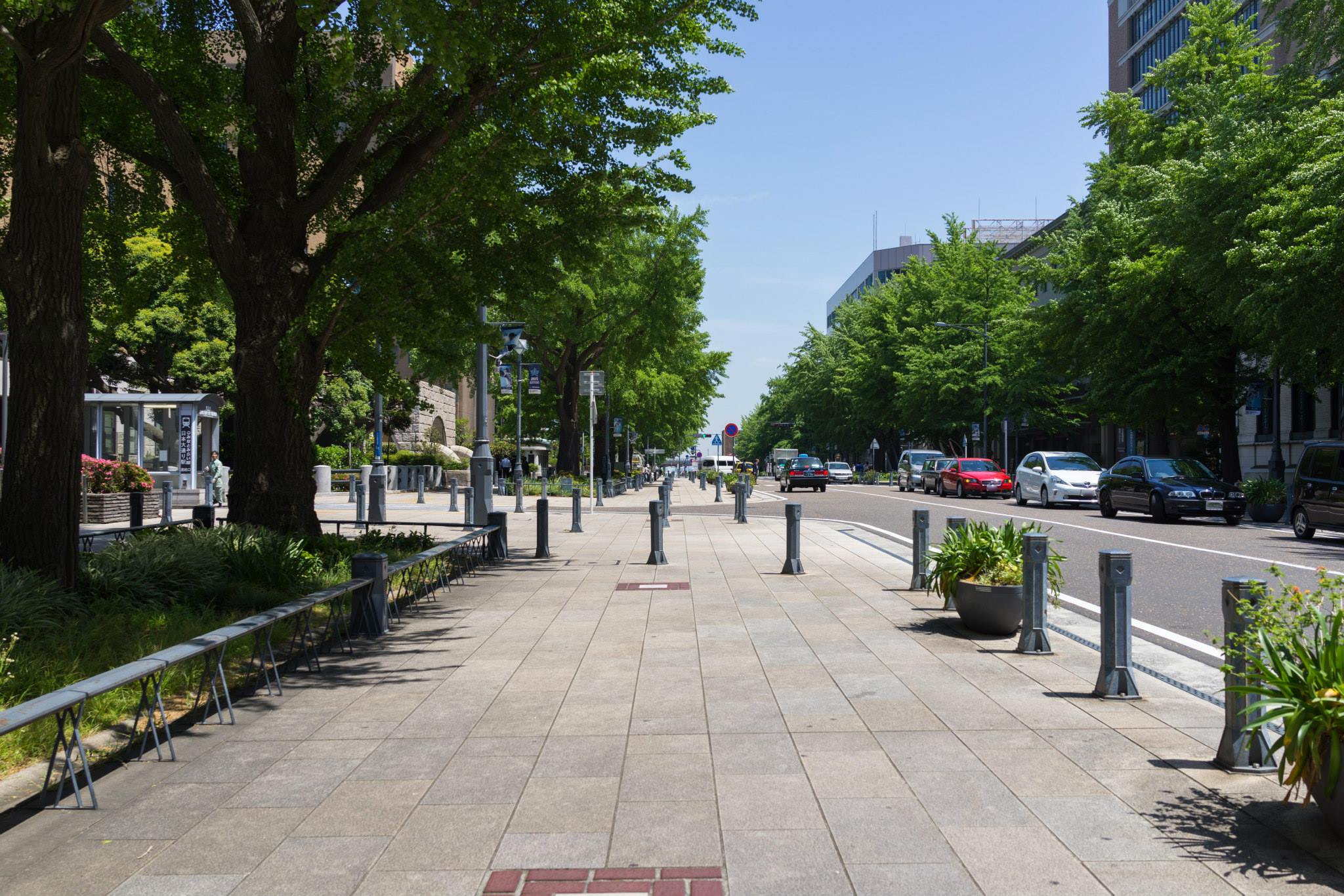 In my opinion, the best parts of Nihon Odori Street are the wonderful trees and elegant cafes! "Gooz" and "Alte Liebe" are great cafes if you want to have a nice relaxing cup of coffee outside in the sun. However many of you may be more drawn to the deep history of the area. There are many buildings built during the Taisho period (1912 - 1926) and the early Showa period (1926 - 1989) along the street and many people like to sketch the buildings because of their aesthetic qualities. Many of the main buildings in the Kannai area were built after the devastating Great Kanto Earthquake of 1923 but there were some buildings that survived the earthquake. The following are some of the historically rich buildings around Nihon Odori Street. 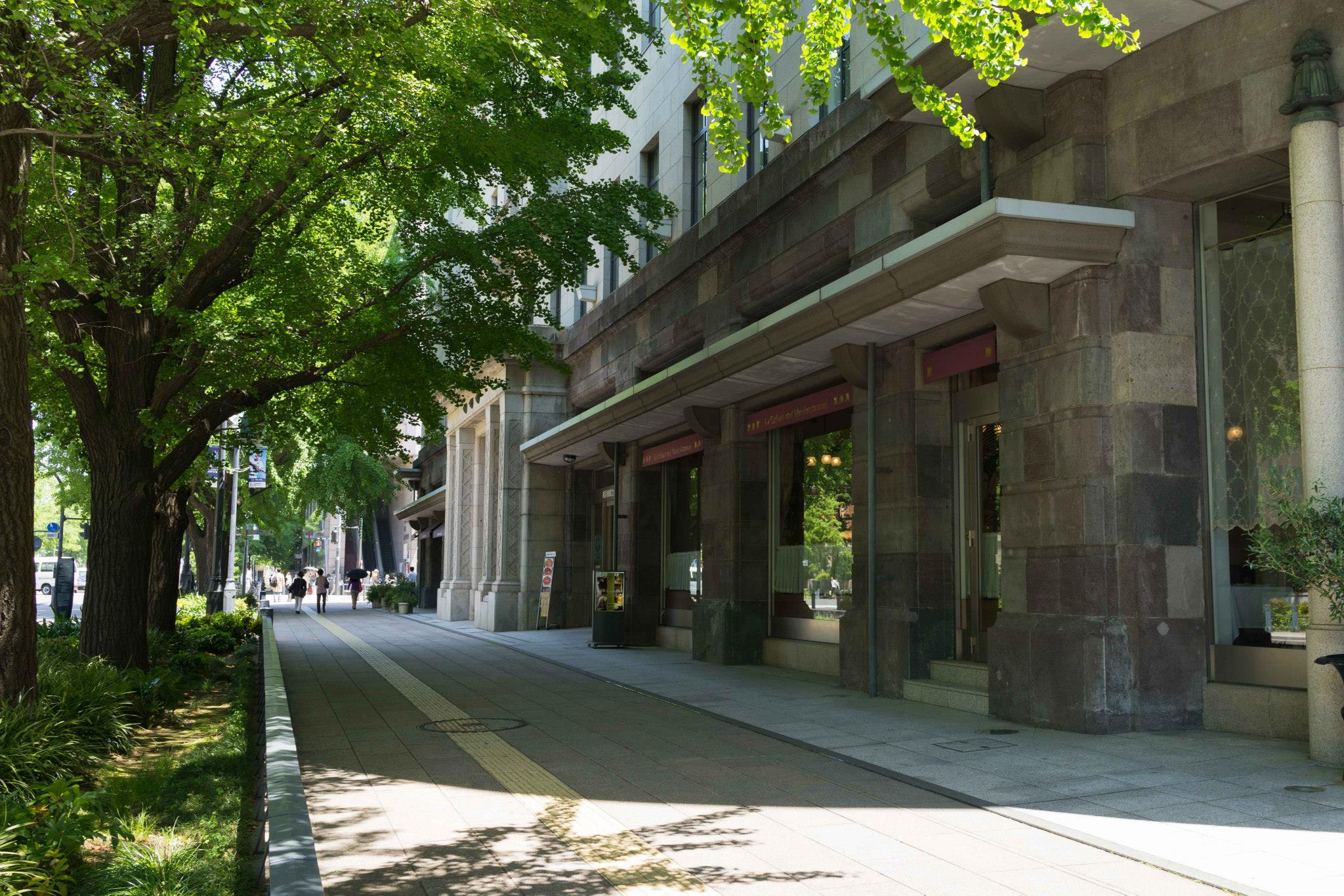 There are many historical buildings

Yokohama Three Towers is the general name for the Kanagawa Prefectural Office (the "King Tower"), the Yokohama Customs building (the "Queen Tower") and the Yokohama Port Opening Memorial Hall (the "Jack Tower"). They are well-known as being the representative towers of Yokohama. At the time of their construction, they were land markers for ships entering Yokohama Port and were named after trump cards by foreign sailors who frequented the port. There's a legend that if you visit all spots where you can see all three towers at the same time, your wish will come true! 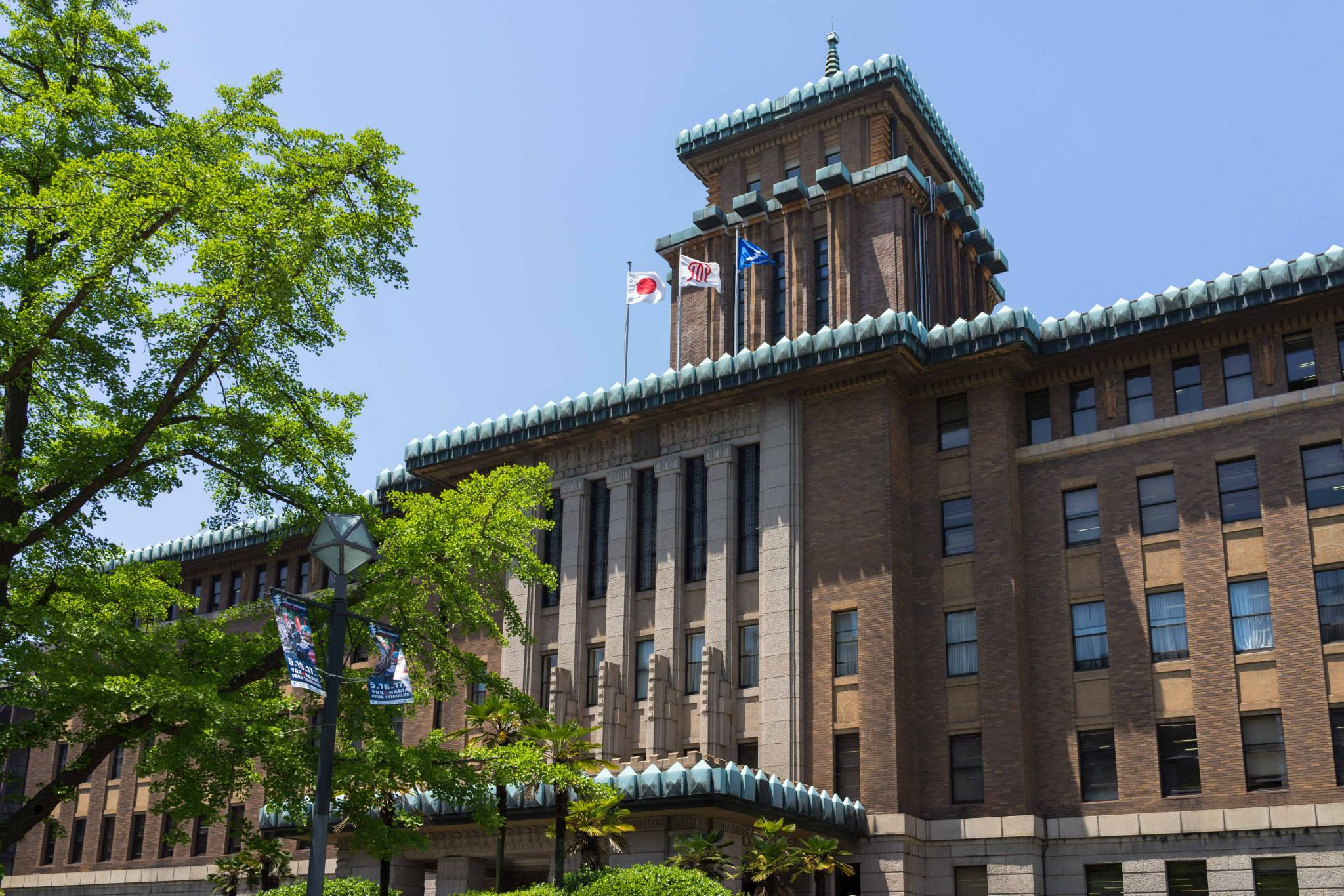 The Kanagawa Prefectural Office was built in 1928. It is also known as the "King Tower". The Teikan-style (Imperial Crown-style) building is one of the first of its kind; created by an amalgamation of Japanese and Western architectural styles. It is a noble building, one that is suitably complementary to Yokohama Port, the figurative "front entrance of Japan". 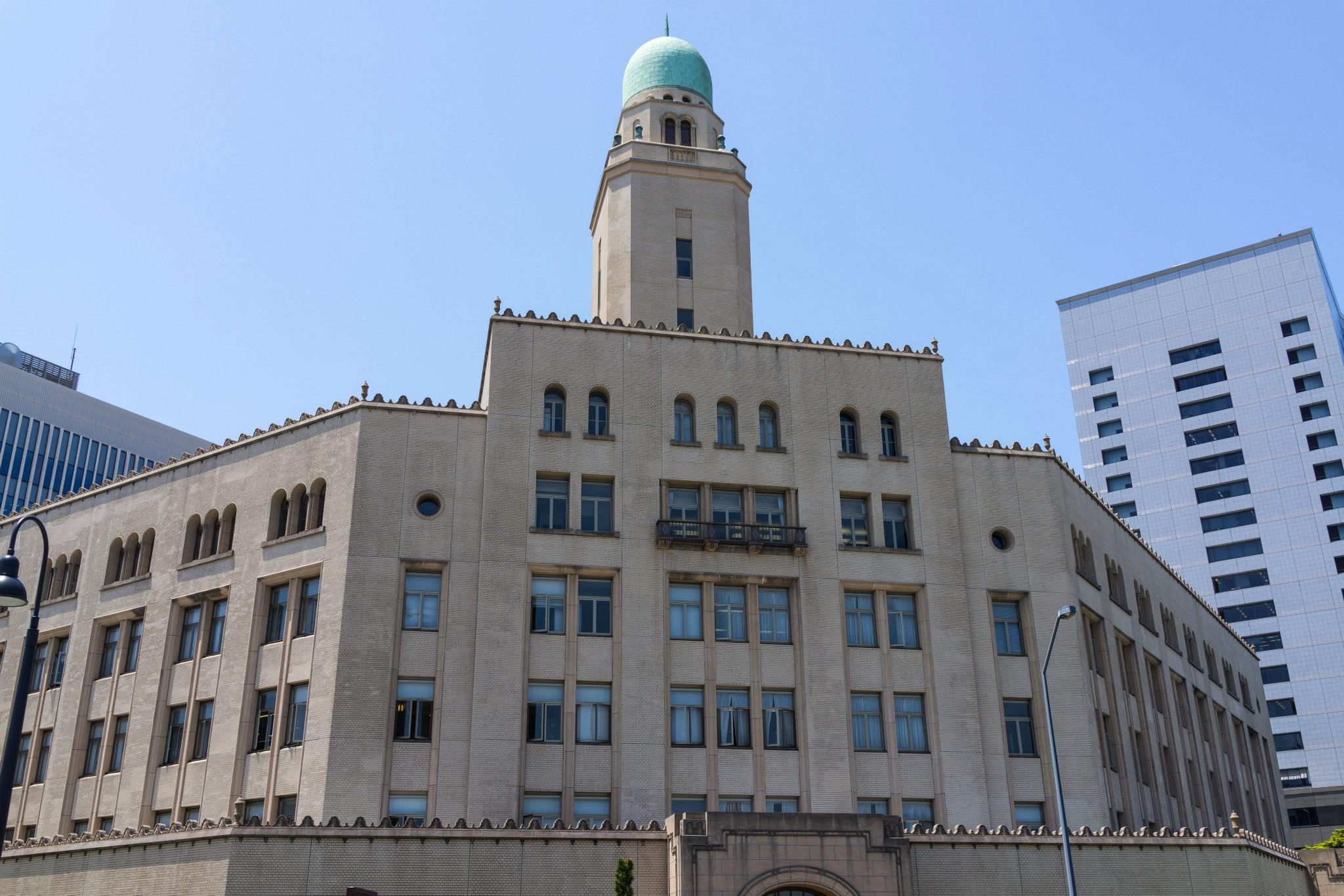 The Yokohama Customs building was built in 1934. Also known as the "Queen Tower”, it is an elegant building whose blue green dome attracts notice. It is the tallest tower among the Yokohama Three Towers and is the first one seen by an incoming ship entering Yokohama Port. It is certainly worthy of being called the "face of Yokohama Port". 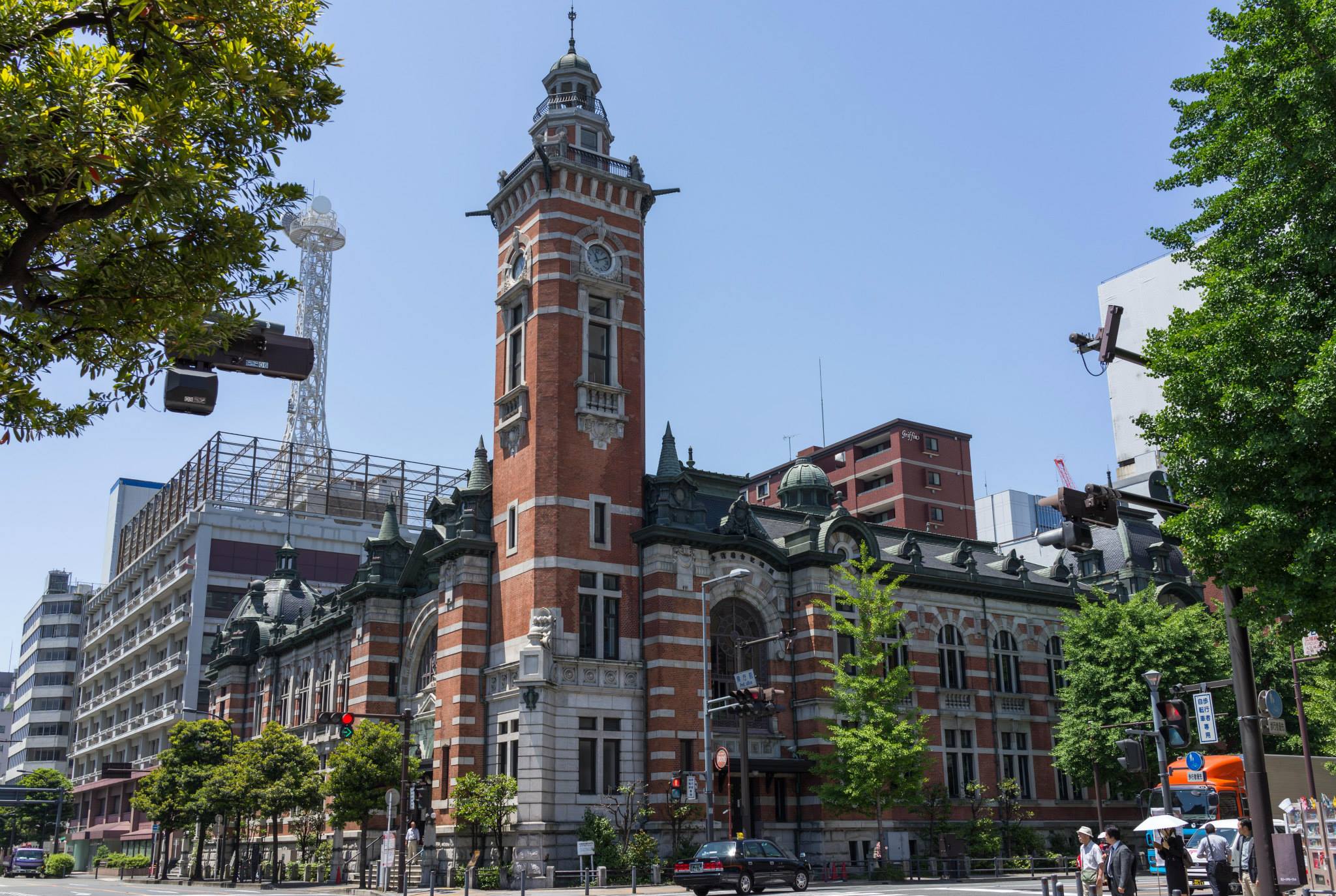 The Yokohama Port Opening Memorial Hall is a red, brick building dating back to 1917 and was built for the 50th anniversary of the opening of the Yokohama Port. Some people may know it alternatively as the "Jack Tower”. It is one of the representative public auditoriums of Japan and it is worth checking out. The orange-brown bricks shine gorgeously in the daytime and in the nighttime it is so beautiful that it has been declared a "Japan Heritage Night View"!

I could go on and on about the Yokohama Three Towers but I will get into more detail at another time. 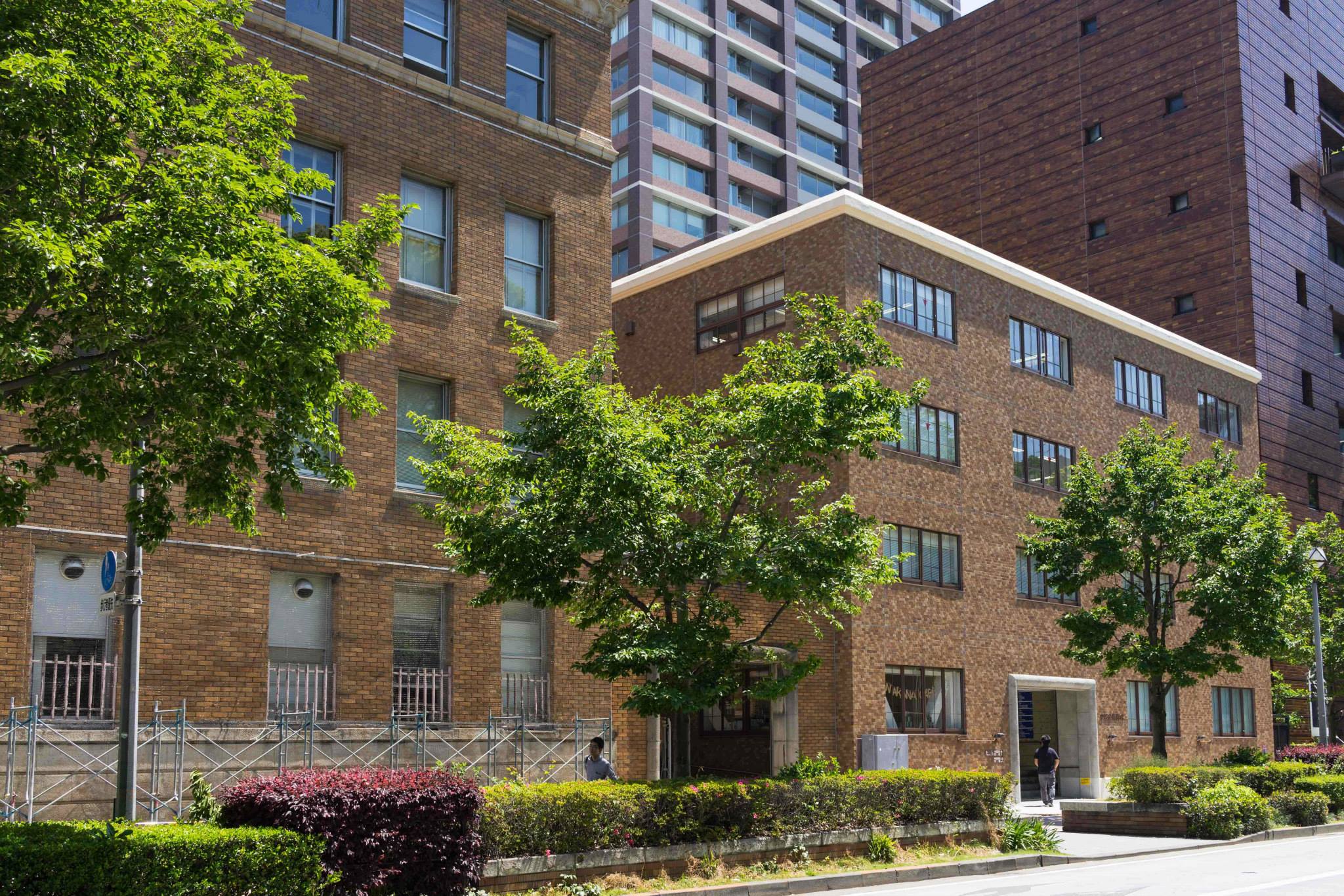 The former Kanto Local Finance Bureau and the former Kanagawa Labor Standards Bureau are located at the entrance of Nihon Odori Street on the Yokohama Park side. They were built in 1928 and were originally used as an office/warehouse by a cotton trading company. The buildings are made of reinforced concrete and its tiled appearance further adds to the calm atmosphere of the area. 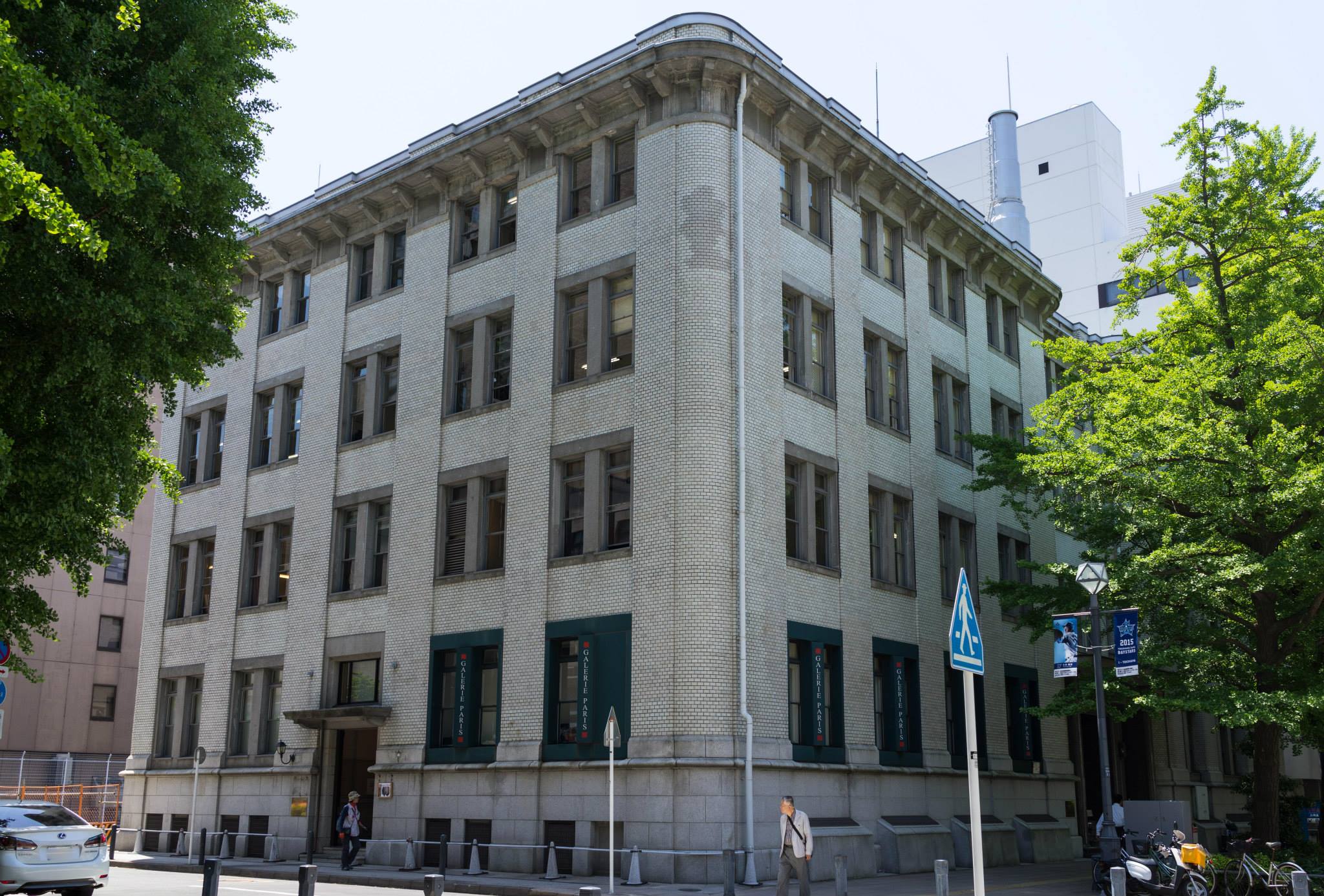 The Yokohama Mitsui-Bussan Building was built in 1911 and is the first office ever to be made of reinforced concrete in Japan. The building was designed by Oto ENDO, a key designer in the construction of numerous historical buildings in Yokohama. Underneath its modern, white-tiled appearance lies an enormous amount of history. This building has been around for over 100 years! If you're interested in art, "GalerieParis", a gallery mainly displaying contemporary art, is located on the first floor. 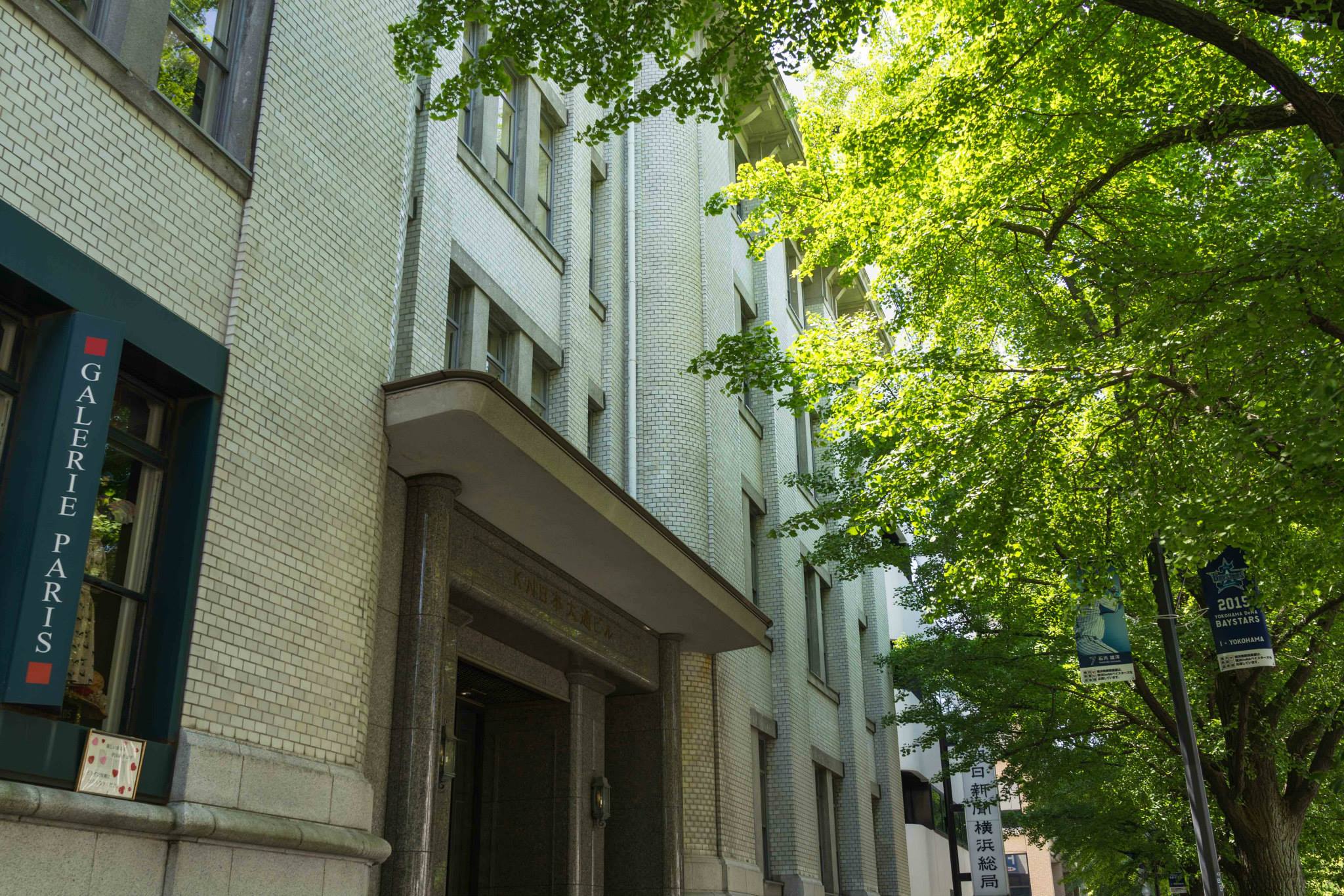 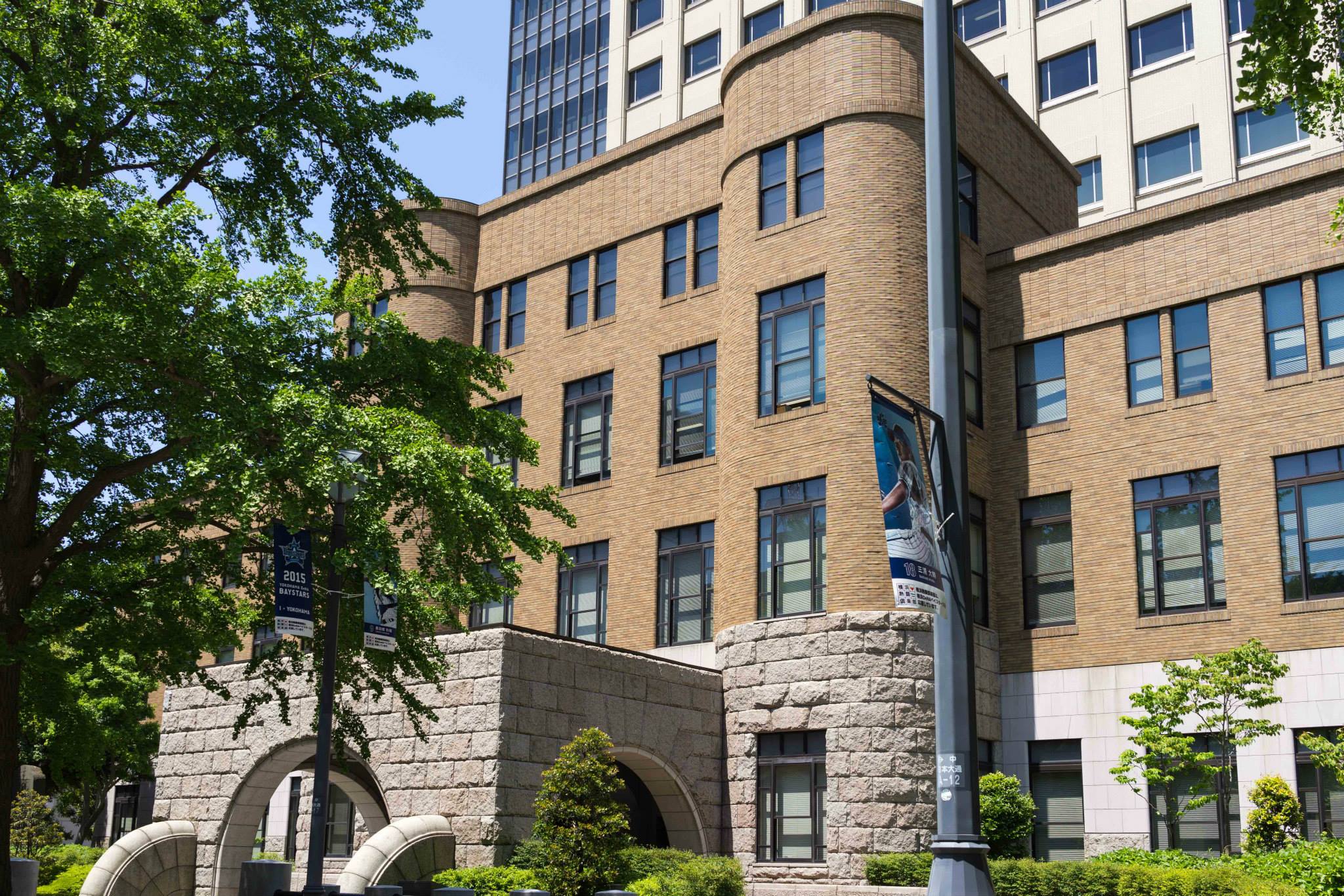 The Yokohama District/Summary Court has been the setting of many controversial judgments concerning Japan's Self-Defense forces and the U.S. military. It's a brown, tiled building with a rather simple appearance, but up close it's less simple than it appears. The construction of the building was well thought-out, with a granite entrance that exudes a towering, massive feeling as you walk under it. The building was rebuilt in 2001 but has maintained the aesthetics of the original building of 1929. 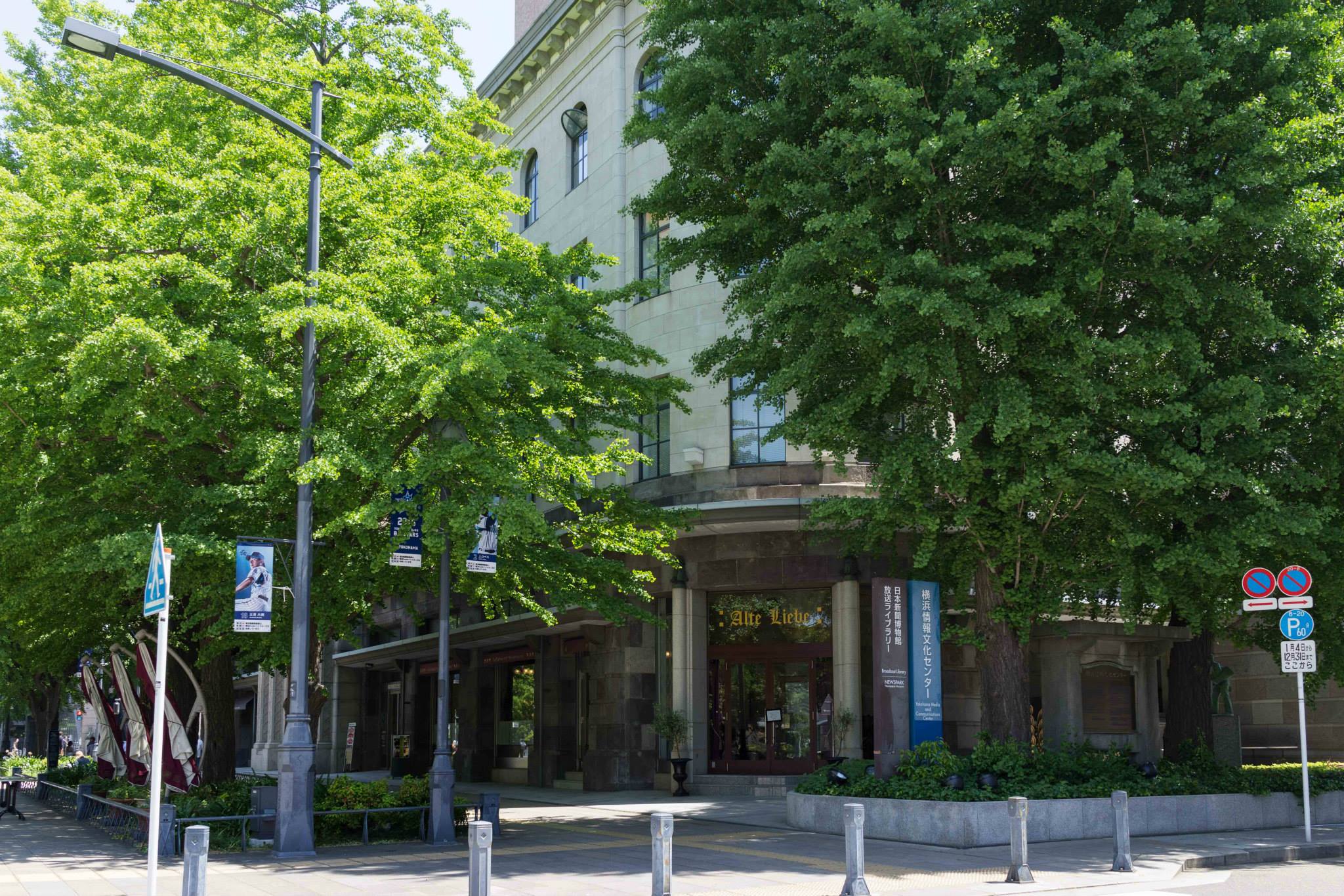 The former Yokohama Commerce and Industry Promotion Center is a white and brown, reinforced concrete building that was constructed in 1929. Its sophisticated granite appearance and cafes complement the relaxing vibe of the green trees and open cafes that line Nihon Odori Street. Today it is used as the Yokohama Information Cultural Center. A relaxed Viennese music restaurant, "Alte Liebeand" and a coffee shop "LUNCHAN AVENUE" are located inside the building. 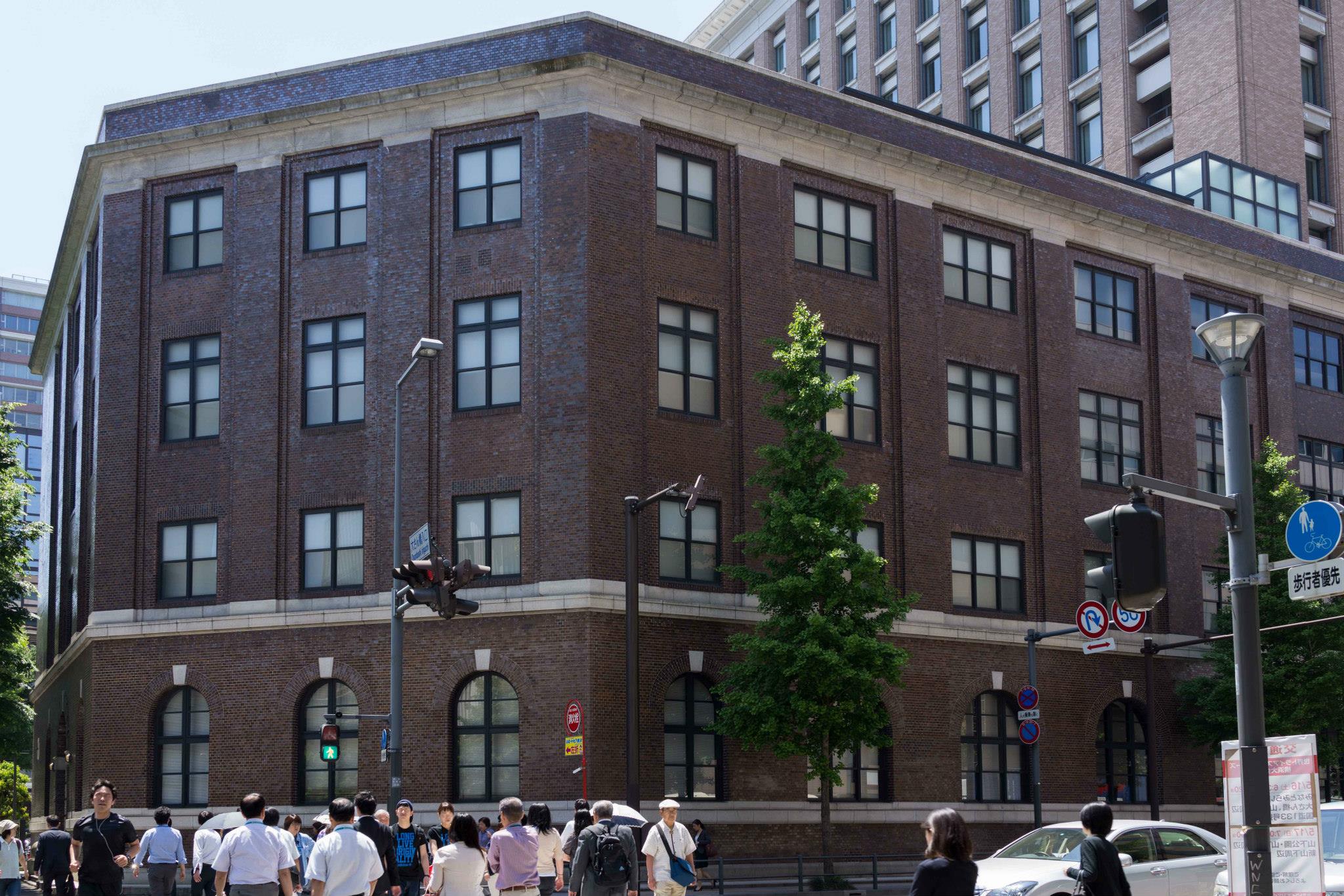 The former Yokohama Long-distance Telephone Exchange building was constructed in 1931. The contrasting shades of brown on the exterior wall tiling fit right in with the calm atmosphere of the place. Today it is made up of 2 museums: the Yokohama Museum of Eurasian Cultures and the Yokohama City Developing Museum.

The Yokohama Archives of History 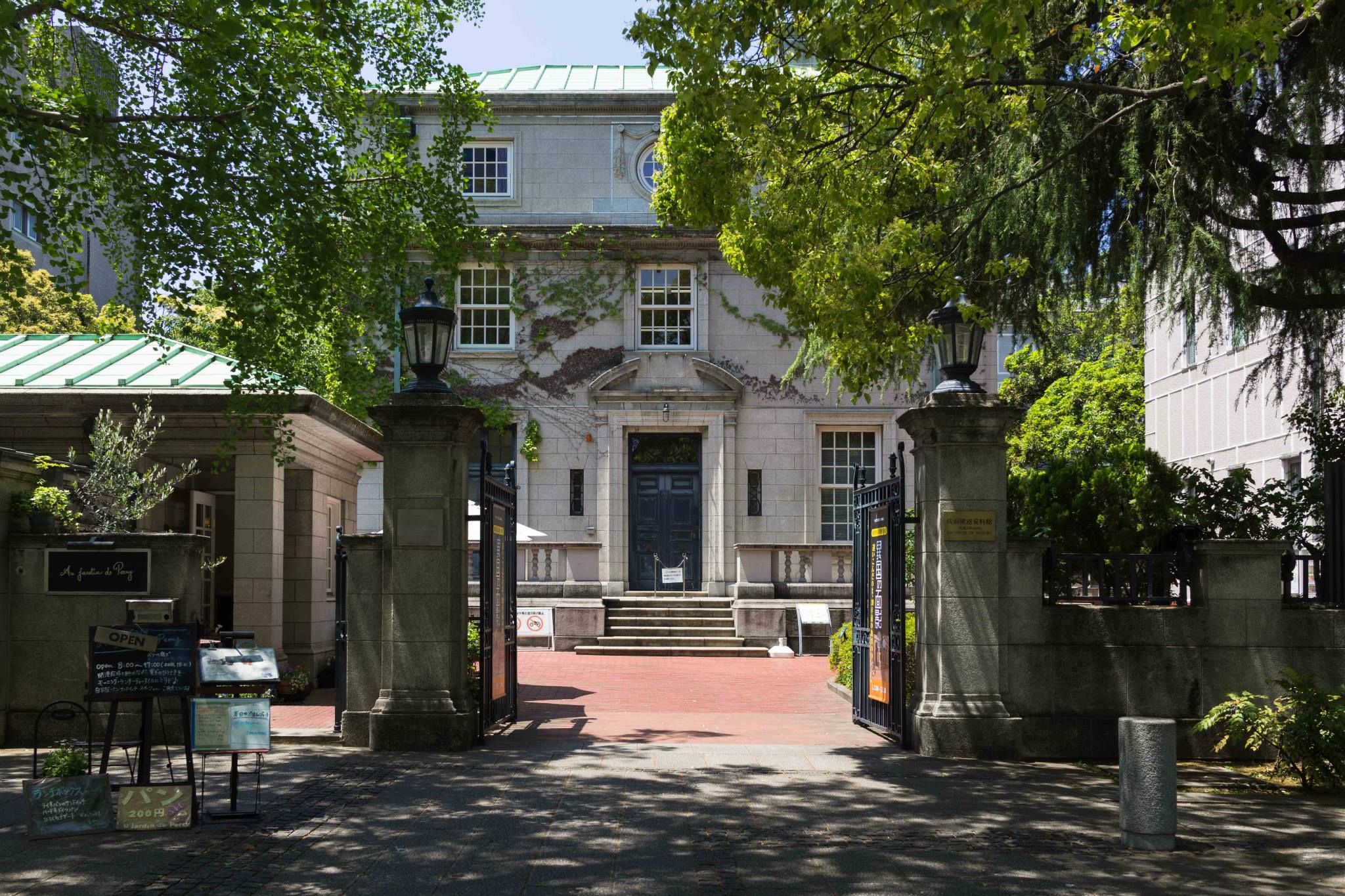 The historic Yokohama Archives of History building was constructed in 1931 and was actually used by the British consulate until 1972. The building was designed by UK Office of Works and resembles a beautiful Georgian-style urban residence. The tastefully thought out ivy-mantled exterior wall further adds to the English feeling of the place. It is adjacent to Port Opening Square (the location where the Convention of Kanagawa was signed, effectively ending Japan's 200 year policy of seclusion). The Tamakusu tree in the courtyard has been there ever since the treaty was signed. Nearby the building is a cafe called "Au jardin de Perry". It's a leisurely cafe made from a once-restored guardroom that I highly recommend! 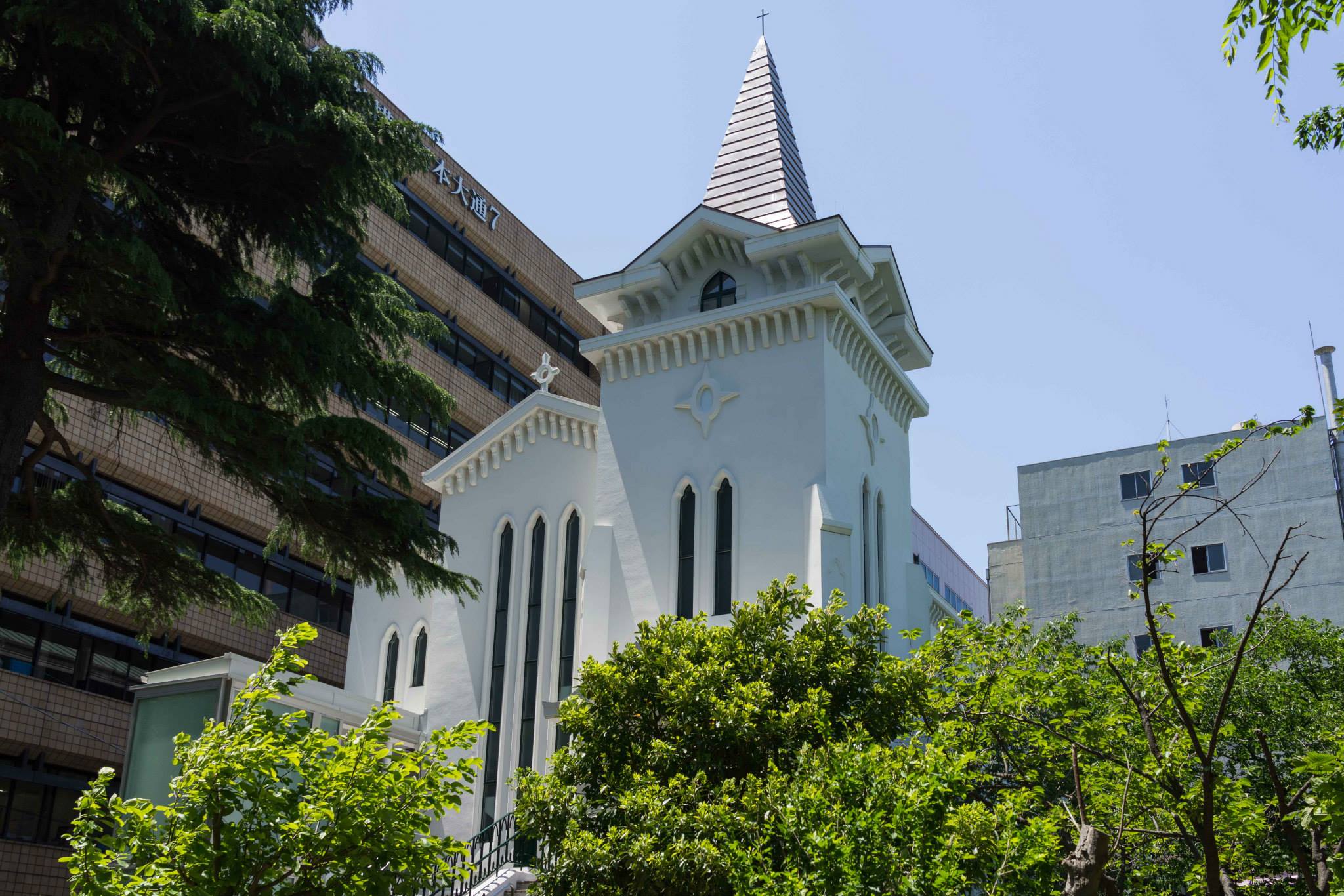 When the Yokohama Kaigan Church was constructed in 1868, it was the first Protestant church in all of Japan! The pearlescent white building that is standing now was completed in 1933. 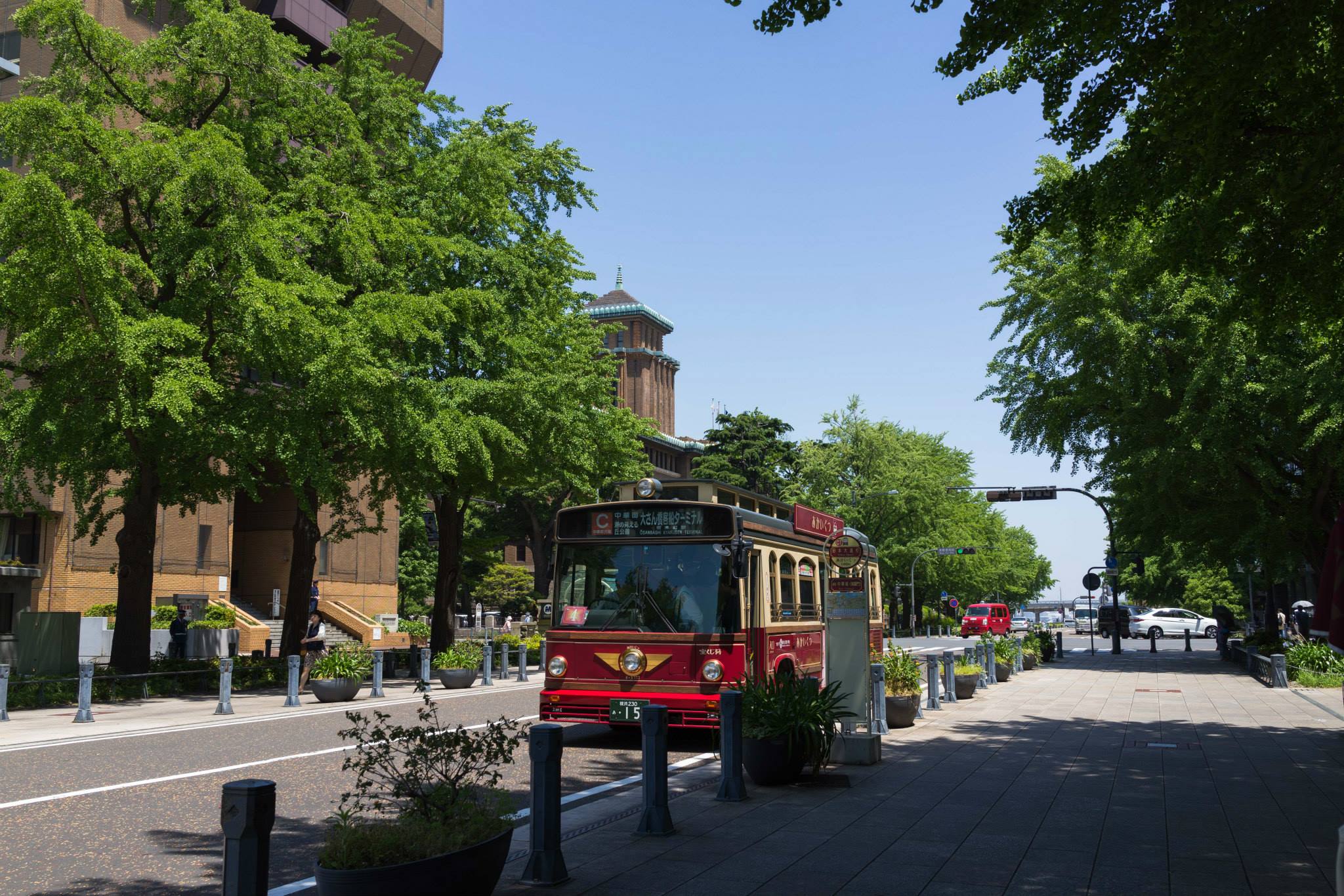 If you're looking to experience more of Yokohama's history look no further than the "Akai Kutsu (red shoes) buses” on Nihon Odori Street! These round-trip buses were created for tourists to experience the "retro-style" of Yokohama. Retro-style is a style inspired by the Taisho period (1912 - 1926) and the early Showa period (1926 - 1989). The lovely tin toy-like bus complements the scenery of Nihon Odori Street very well. The bus runs every 20 minutes on weekdays and every 15 minutes on weekends and national holidays. Check it out! 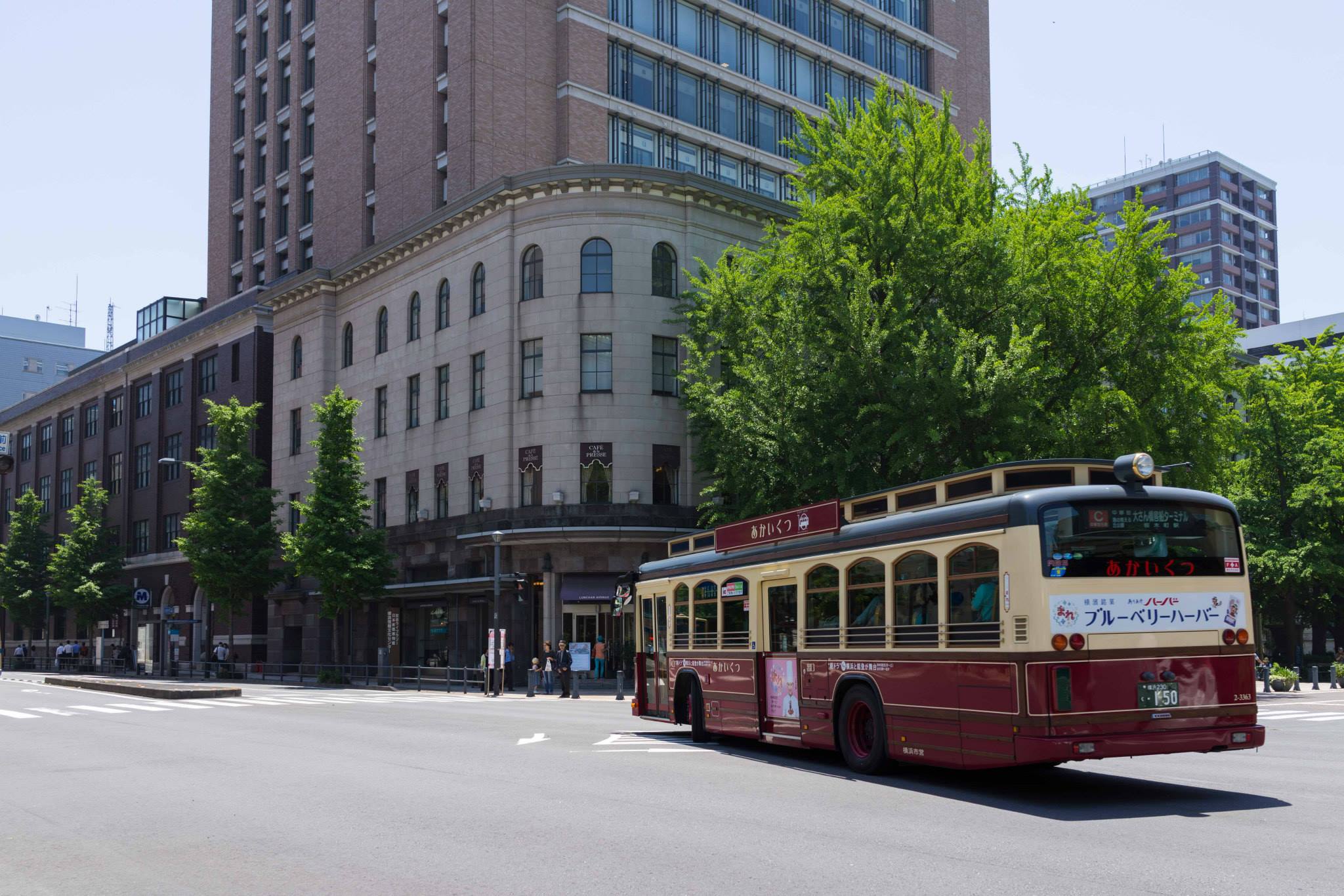 The Final Stretch: Towards Kaigan Dori Street and the Yokohama Port!

You will reach Kaigan Dori Street after passing the Kanagawa Prefectural Office. Beyond the office is where the Yokohama Port (Zou-no-hana Park) is located. The history behind the port and just the beauty of it is a really something that needs to be experienced! I will go into further detail about Kaigan Dori Street and Zou-no-hana Park at another time, as they are some of my favorite places in Yokohama. 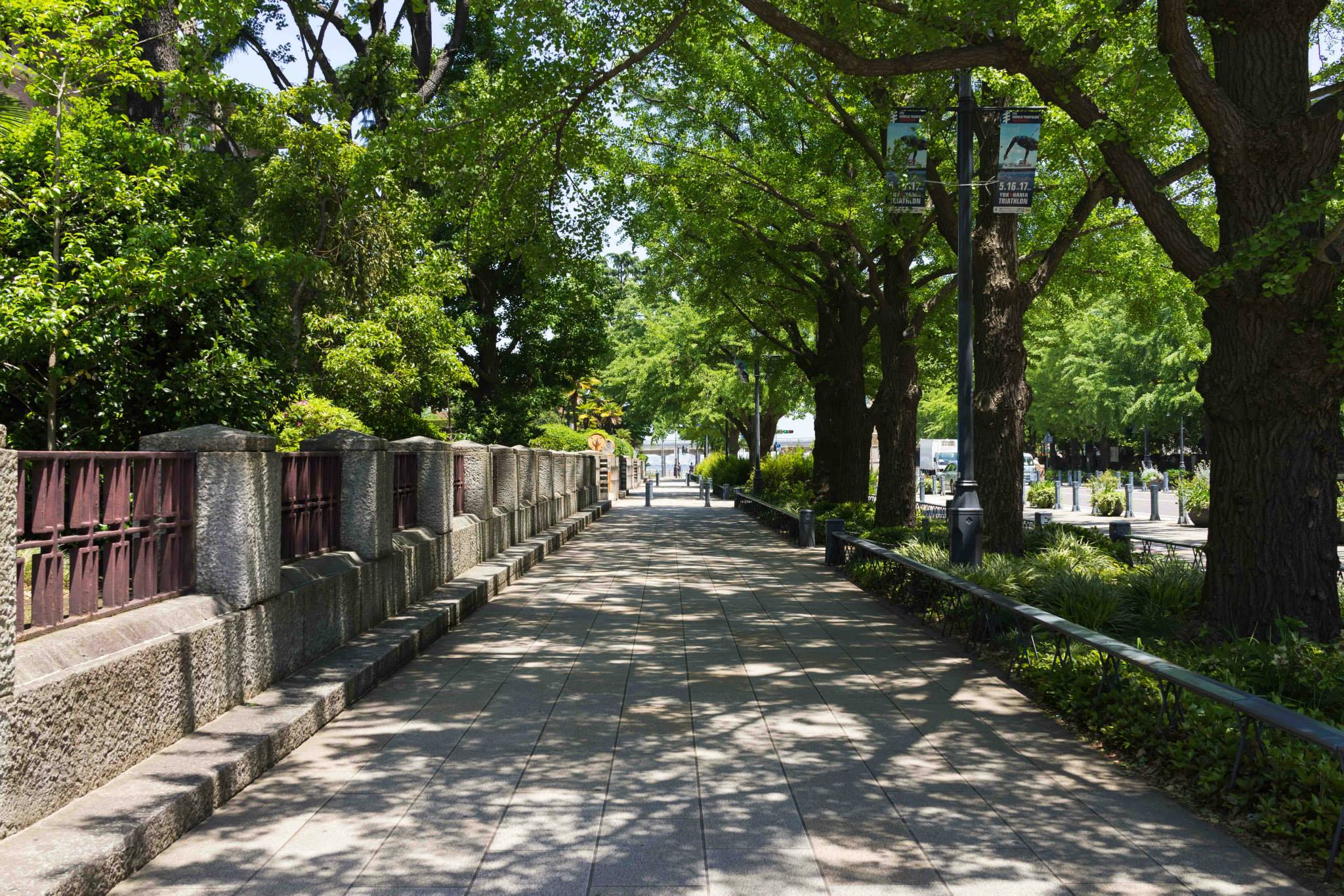 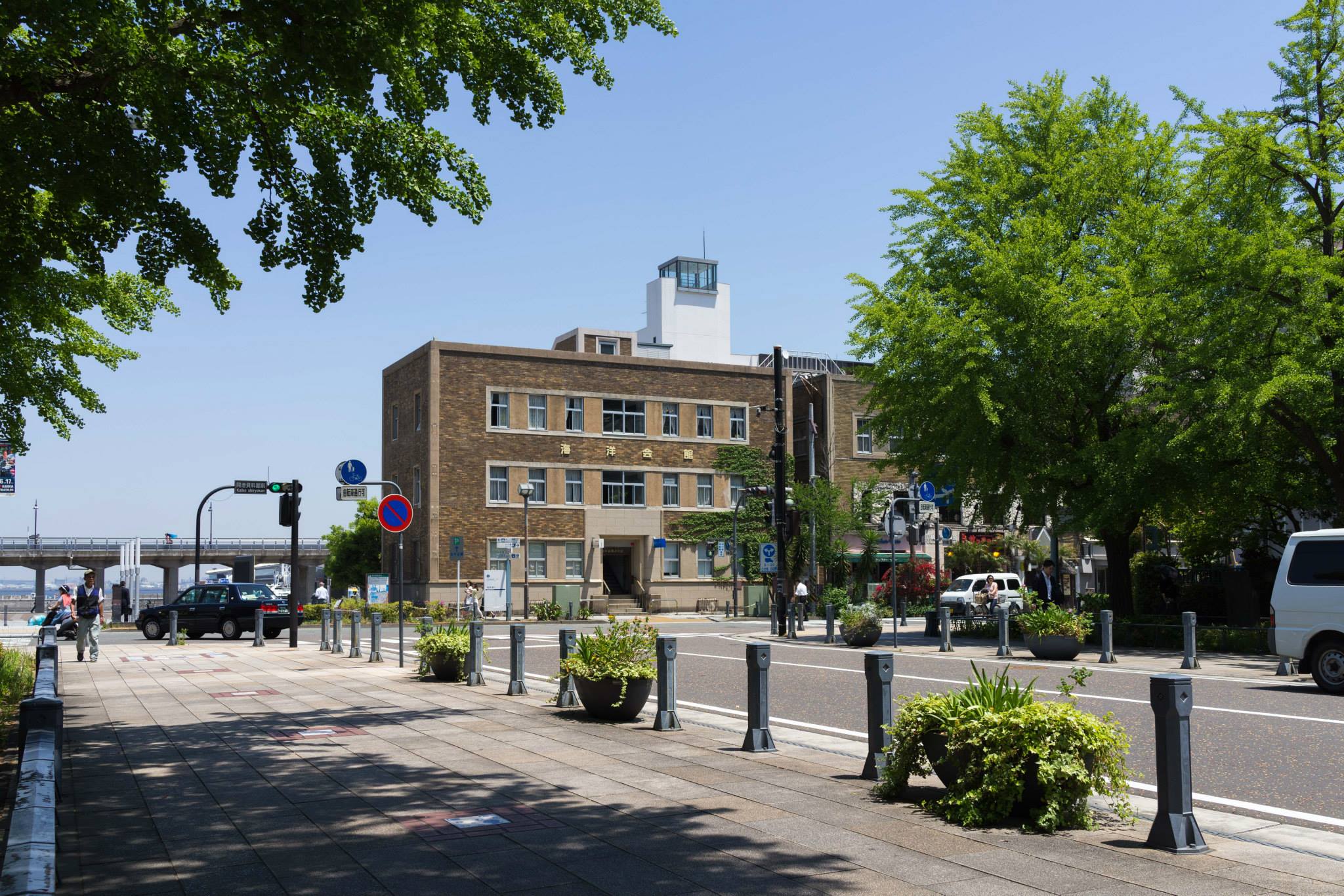 And then you will reach Kaigan Dori Street

So there you have it! Nihon Odori Street: A uniquely wide, tree-lined street, full of many historical buildings that only add further to the rich history and scenery of Yokohama. If you're ever around in Yokohama I highly recommend a nice leisurely stroll through the area!