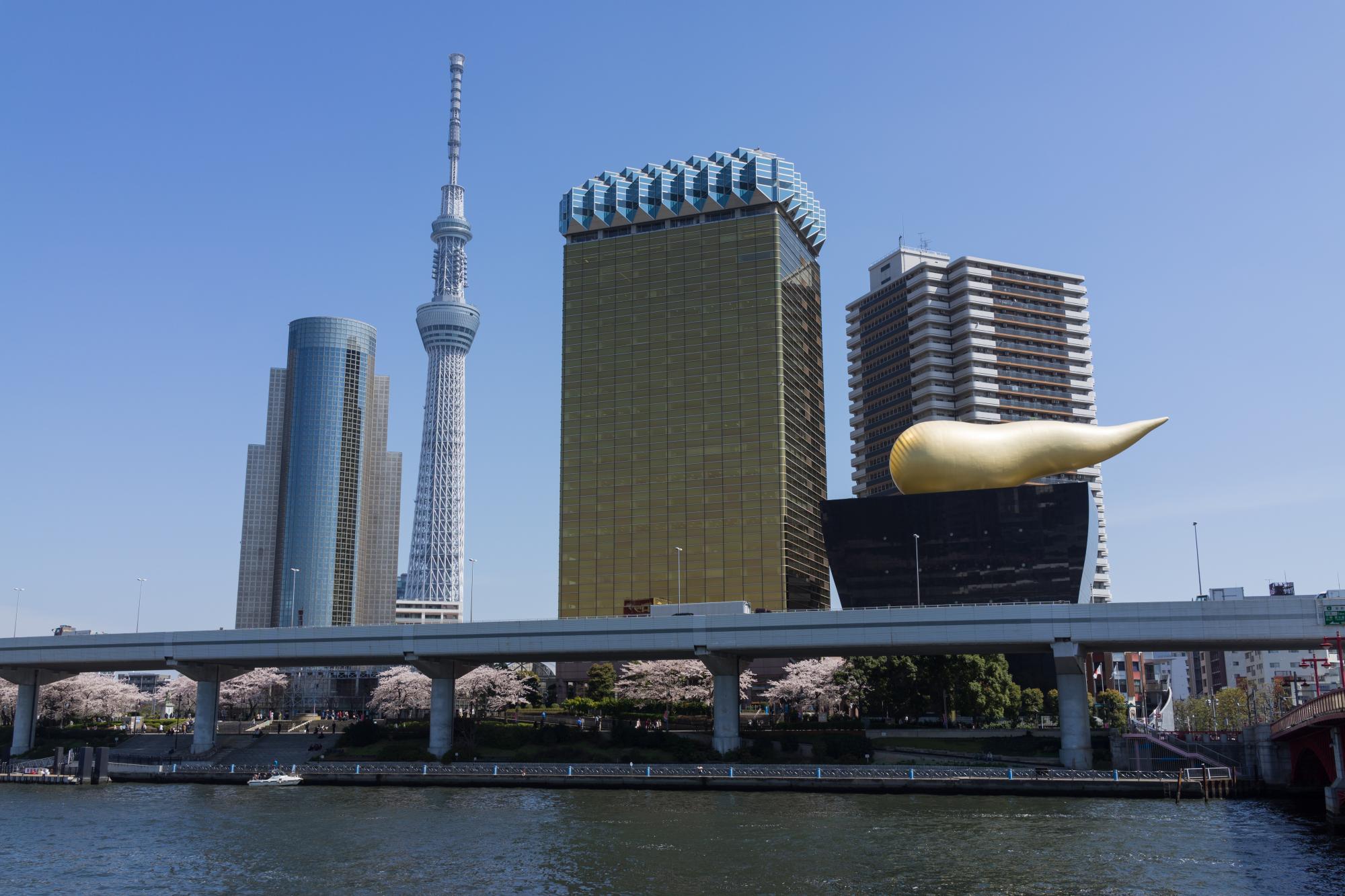 The view of Tokyo Skytree and Asahi Beer Tower 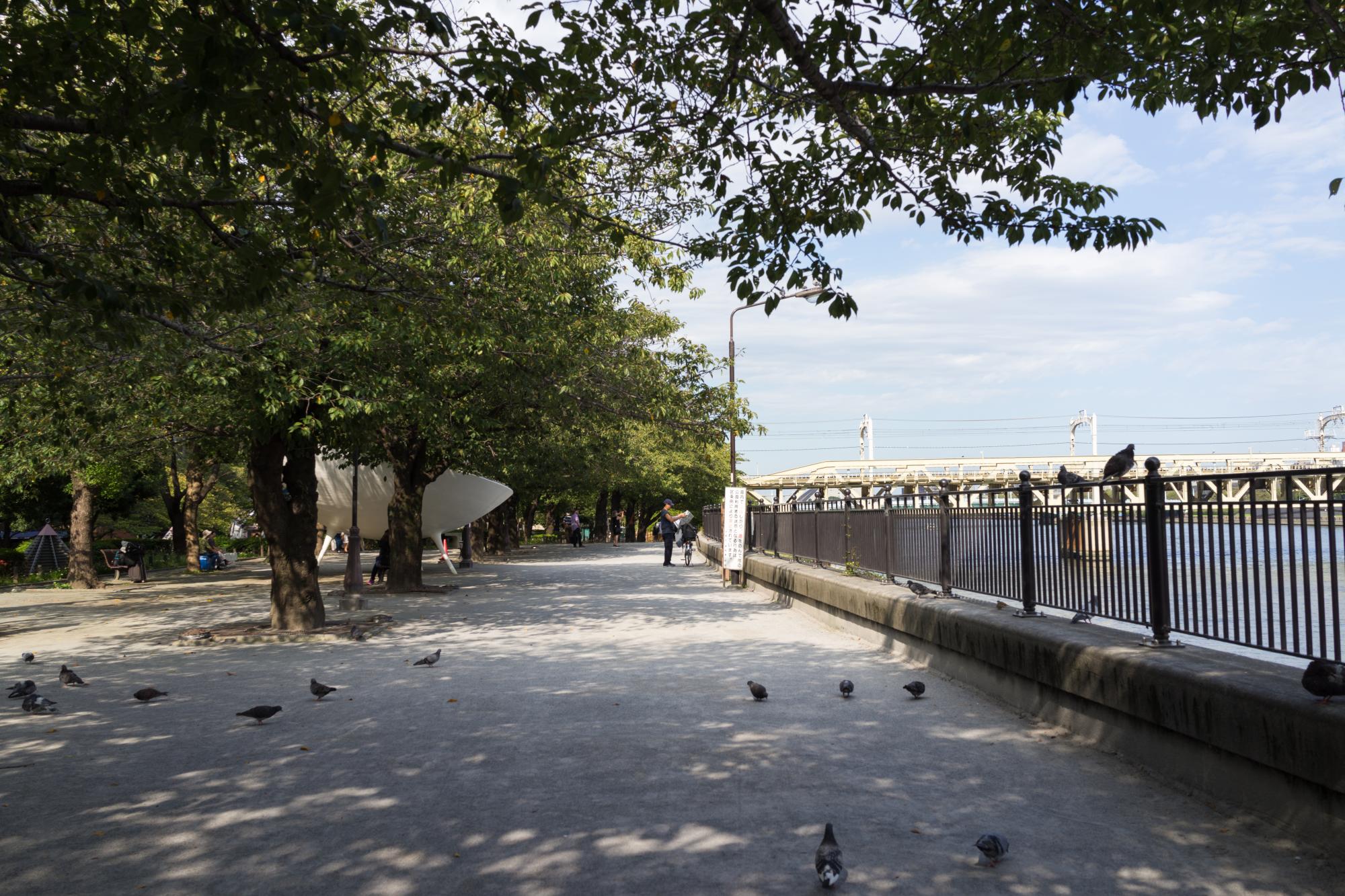 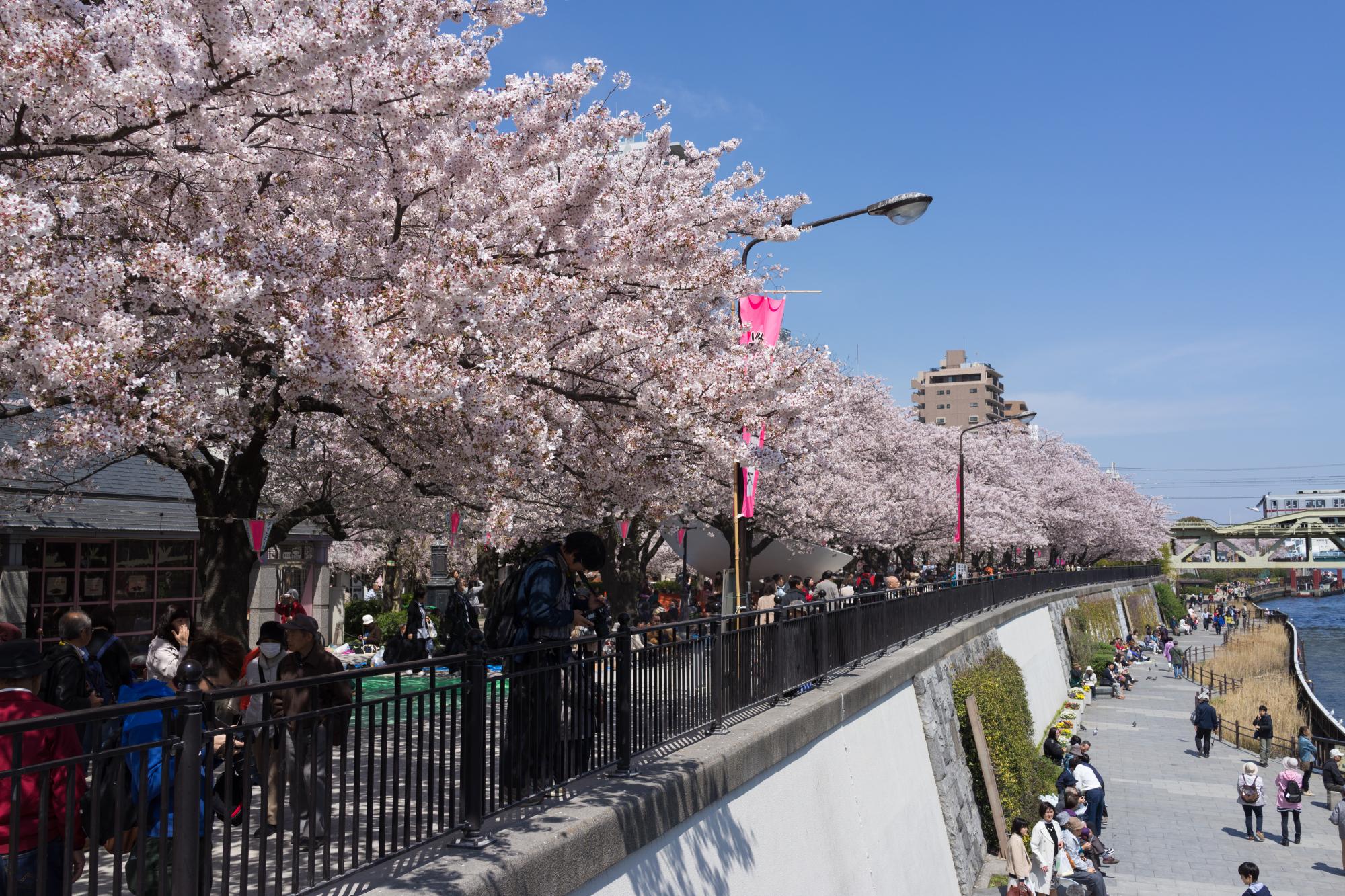 The representative scene of Sumida Park is that of Tokyo Skytree and Asahi Beer Tower. They are both located Sumida ward opposites Asakusa and you can enjoy whole views of them from Sumida Park. Tokyo Skytree is a broadcasting tower completed in 2012. It is 634 meters tall and the tallest tower in the world. As a new landmark it is very popular for people. Asahi Beer Tower is the headquarter building of Asahi Breweries, one of the major breweries in Japan. The building is shaped like a beer mug. There is also an objet d'art called “Flame d'Or” (that means golden flame in French) on the roof of Asahi Beer Hall adjacent to the building. It is familiar with people as one of the representative views of Asakusa.

There are two landing places for waterbuses; “TOKYO CRUISE” and “Tokyo Mizube Cruising Line” (that for “TOKYO CRUISE” is located near Azumabashi Bridge and that for “Tokyo Mizube Cruising Line” near Nitenmon Gate of Sensoji Temple). Each has plural courses and you can enjoy cruise in the Sumida River and Tokyo Bay. HOTALUNA and HIMIKO that are ships of TOKYO CRUISE were produced by Leiji MATSUMOTO, a manga artist famous for “Galaxy Express 999” and “Space Battleship Yamato”. They are shaped like a spaceship and their futuristic appearance is worth seeing. 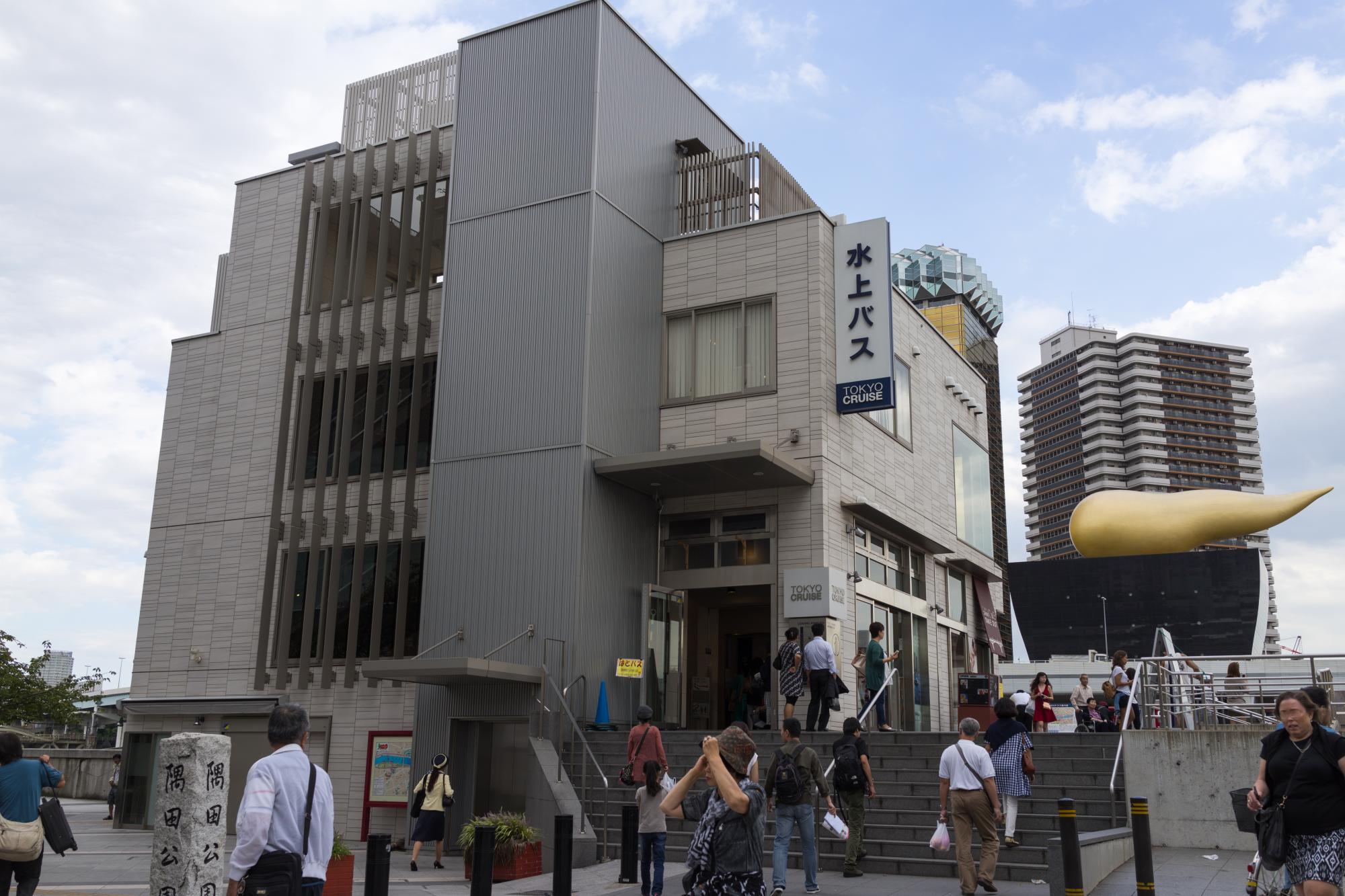 The landing place of TOKYO CRUISE

In Sumida Park there are four unique bridges across the Sumida River and you can take a nice picture at each bridge. 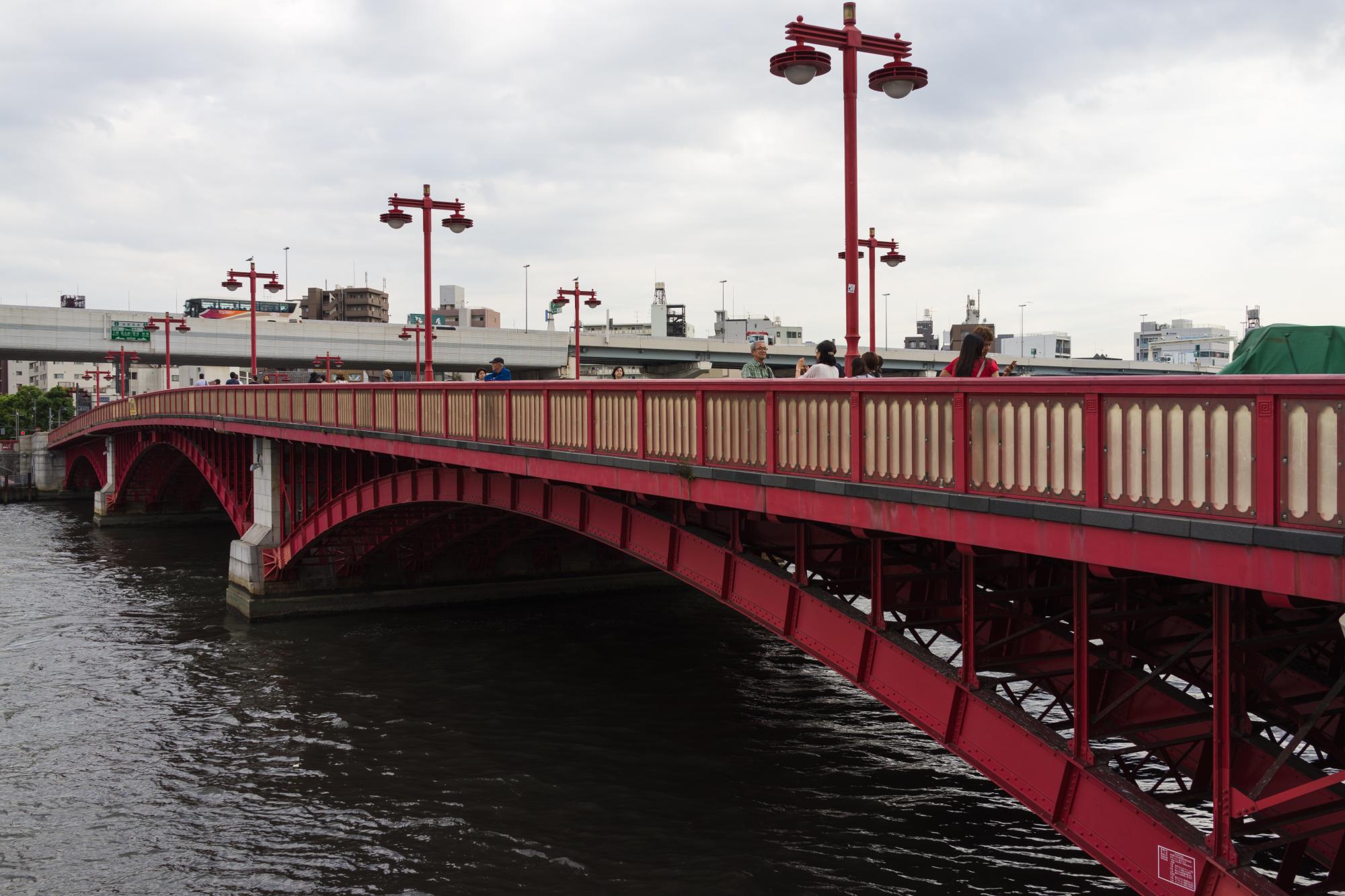 Azumabashi Bridge is an iron bridge whose vivid vermillion color attracts notice. It was constructed in 1931. It is located at the southern edge of the park and near the center of Asakusa. With Tokyo Skytree and Asahi Beer Tower, Azumabashi Bridge creates a good picture. 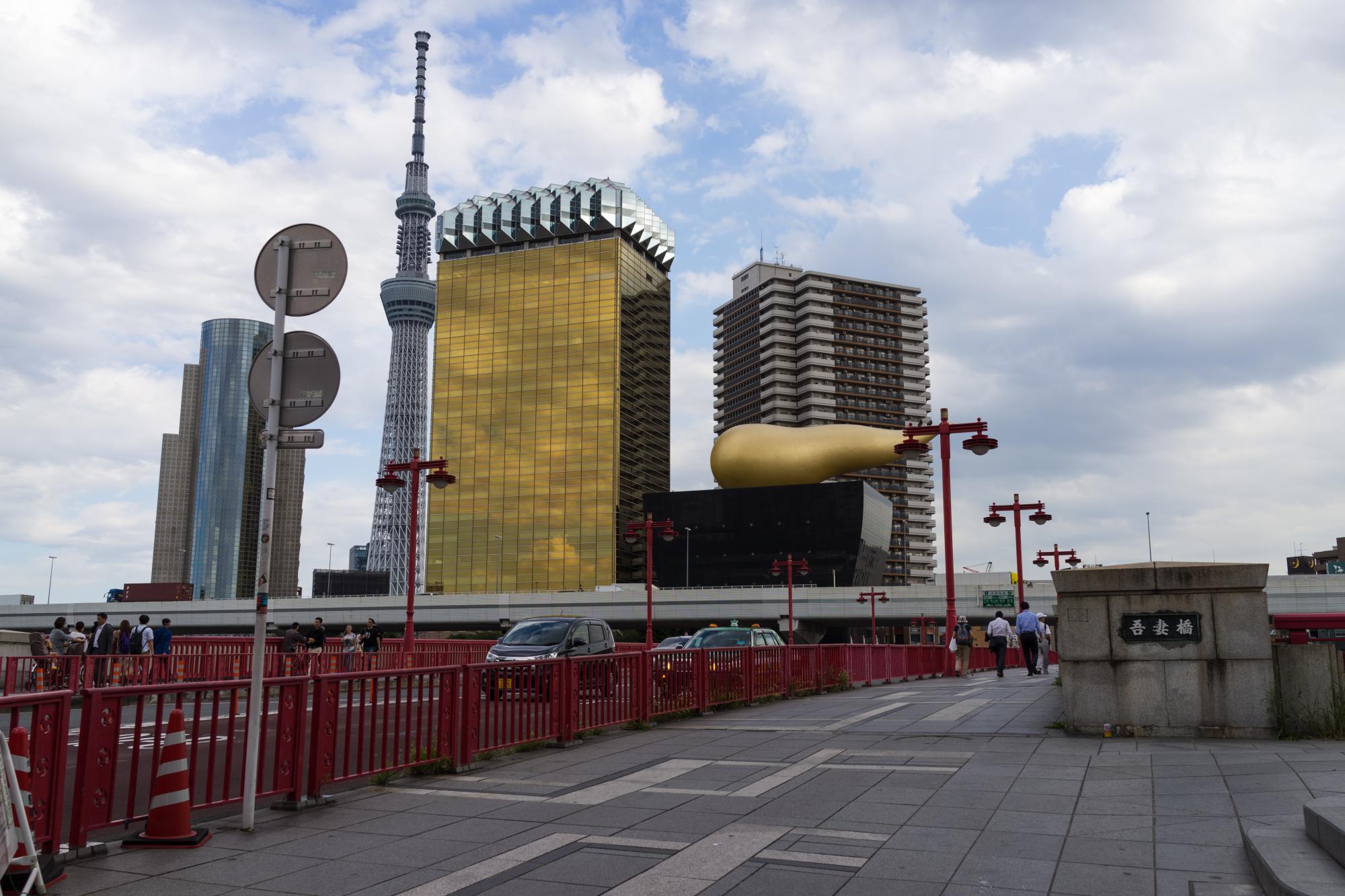 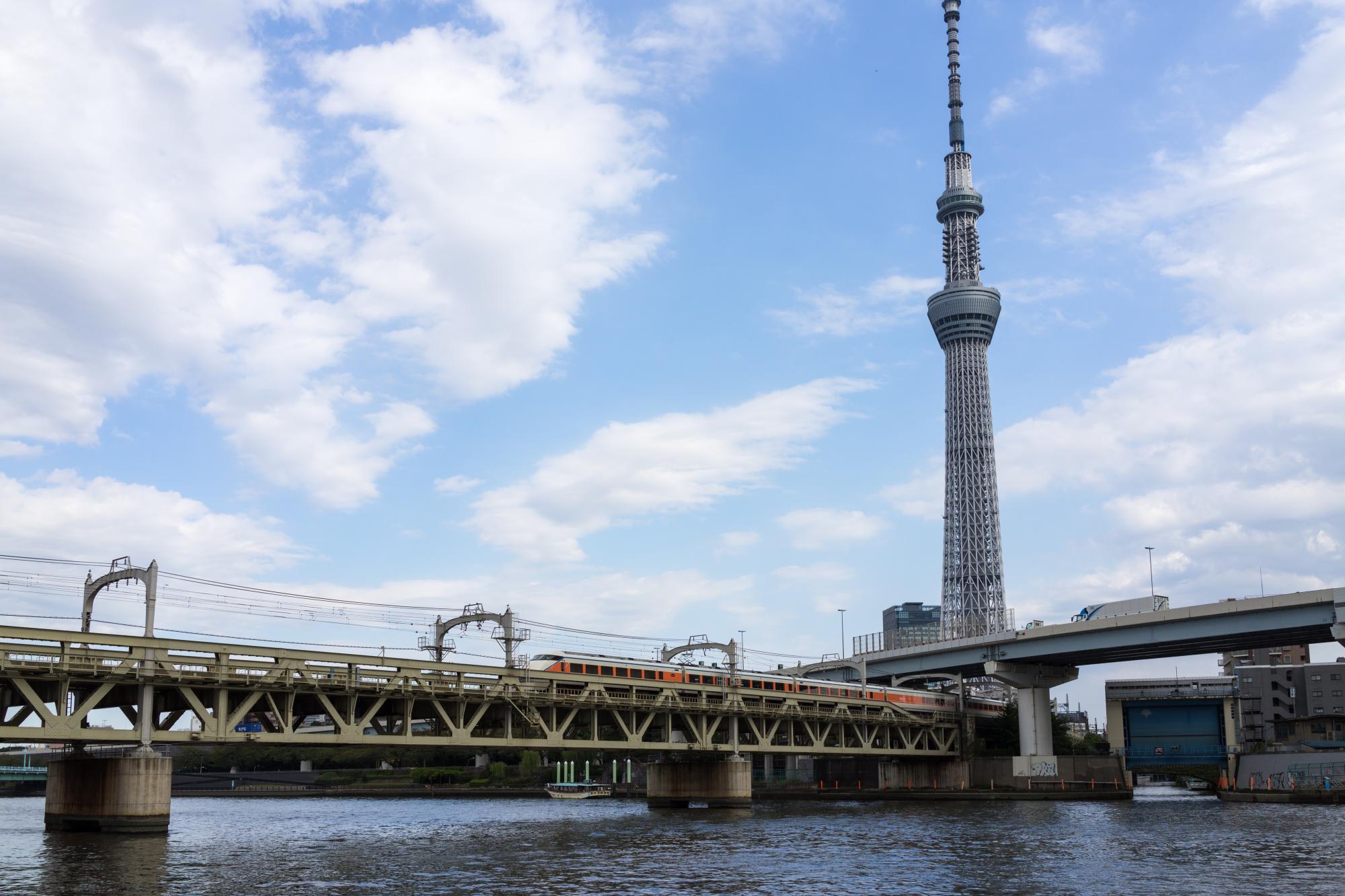 Hanakawado Railway Bridge (Tobu Railway Sumida River Bridge) is a railway bridge on the Tobu Isezaki Line. The combination of a train and Tokyo Skytree is wonderful. It is also constructed in 1931. 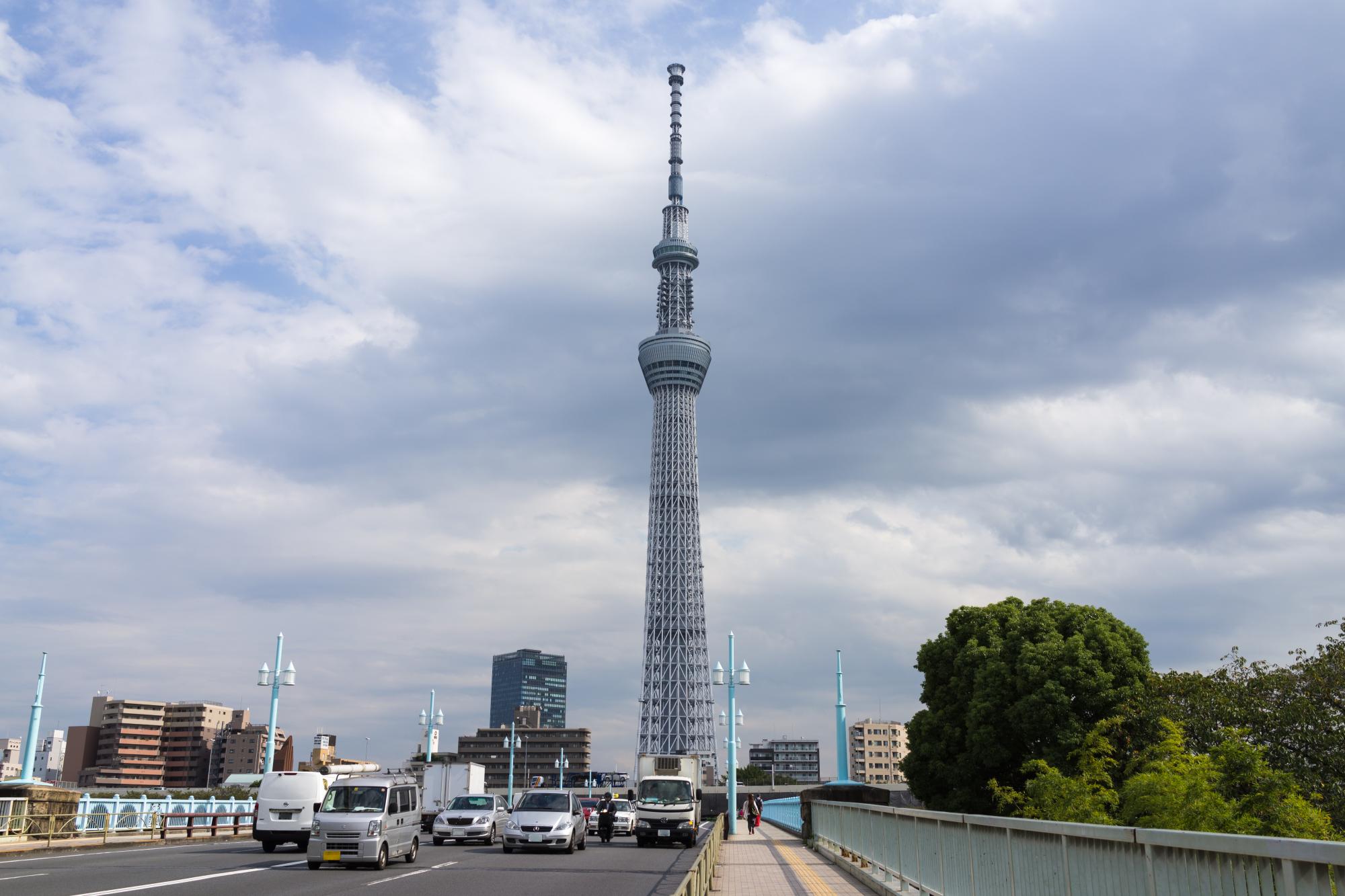 The view of Tokyo Skytree from Kototoibashi Bridge 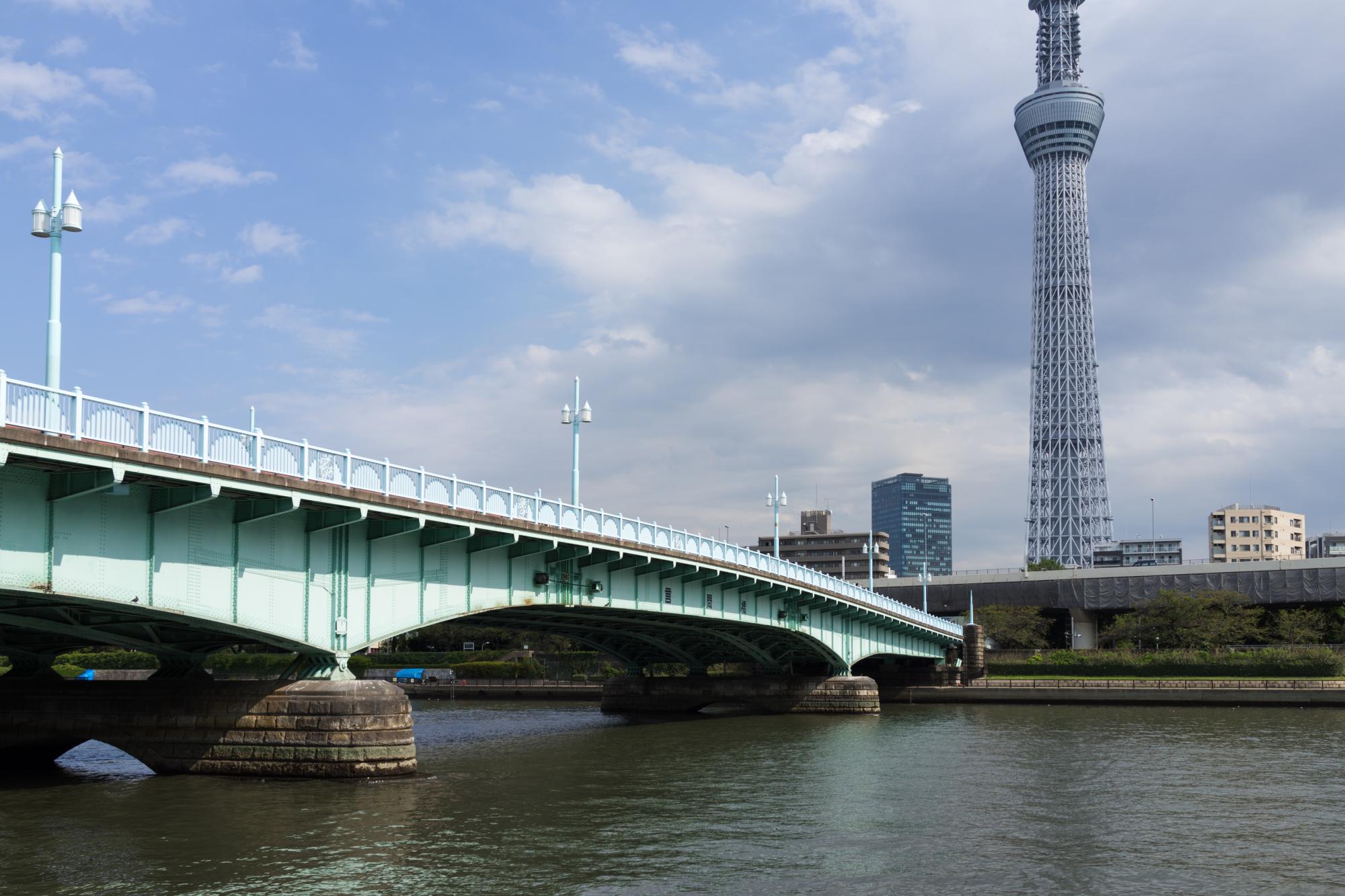 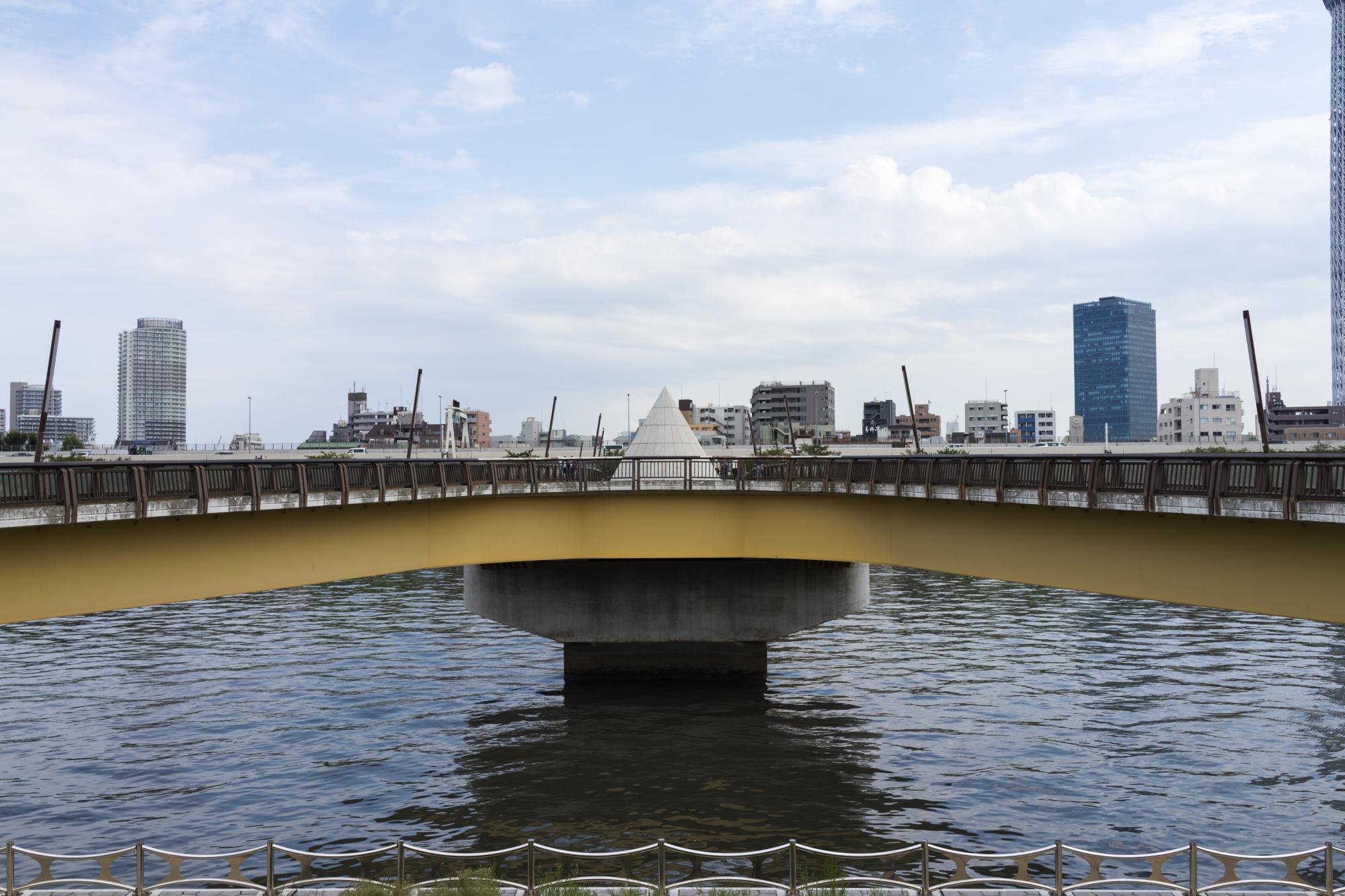 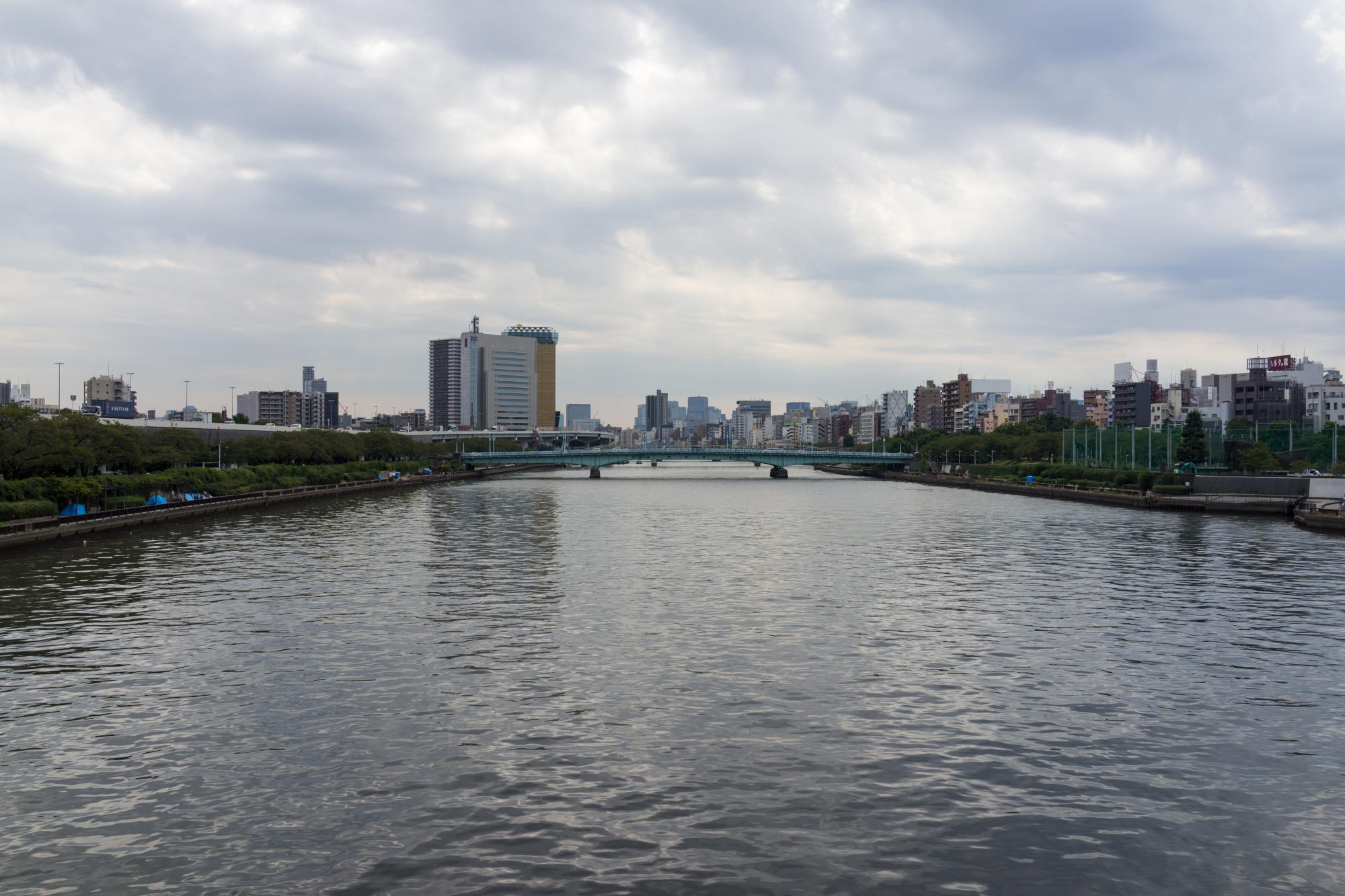 The view of Sumida River from Sakurabashi Bridge 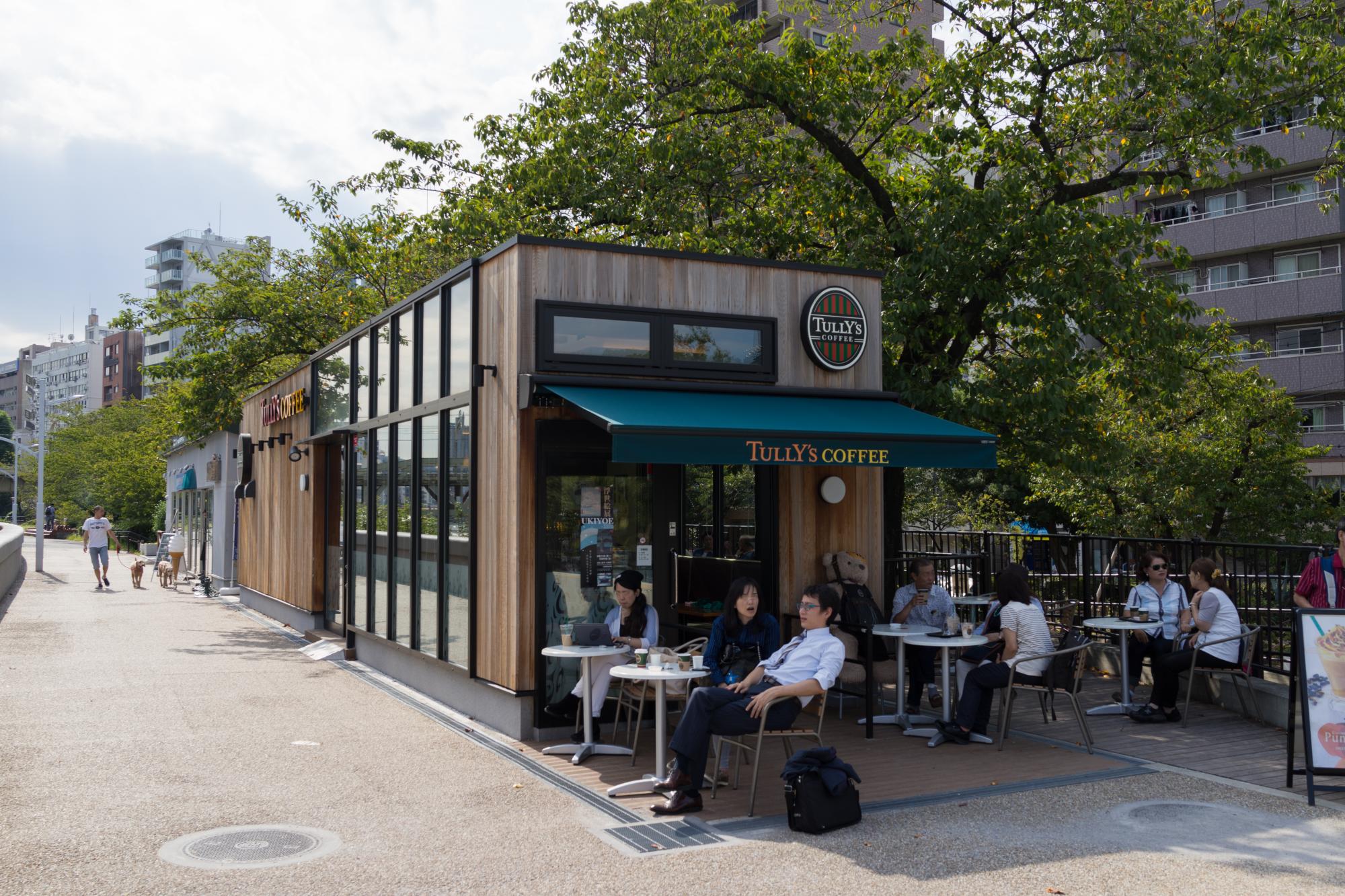 In the park there are two cafes; Tully's Coffee Sumida Park store and Cafe W.E. You can spend relaxing time viewing scenery of Sumida Park and the Sumida River. On weekend during the summer you can drink beer! 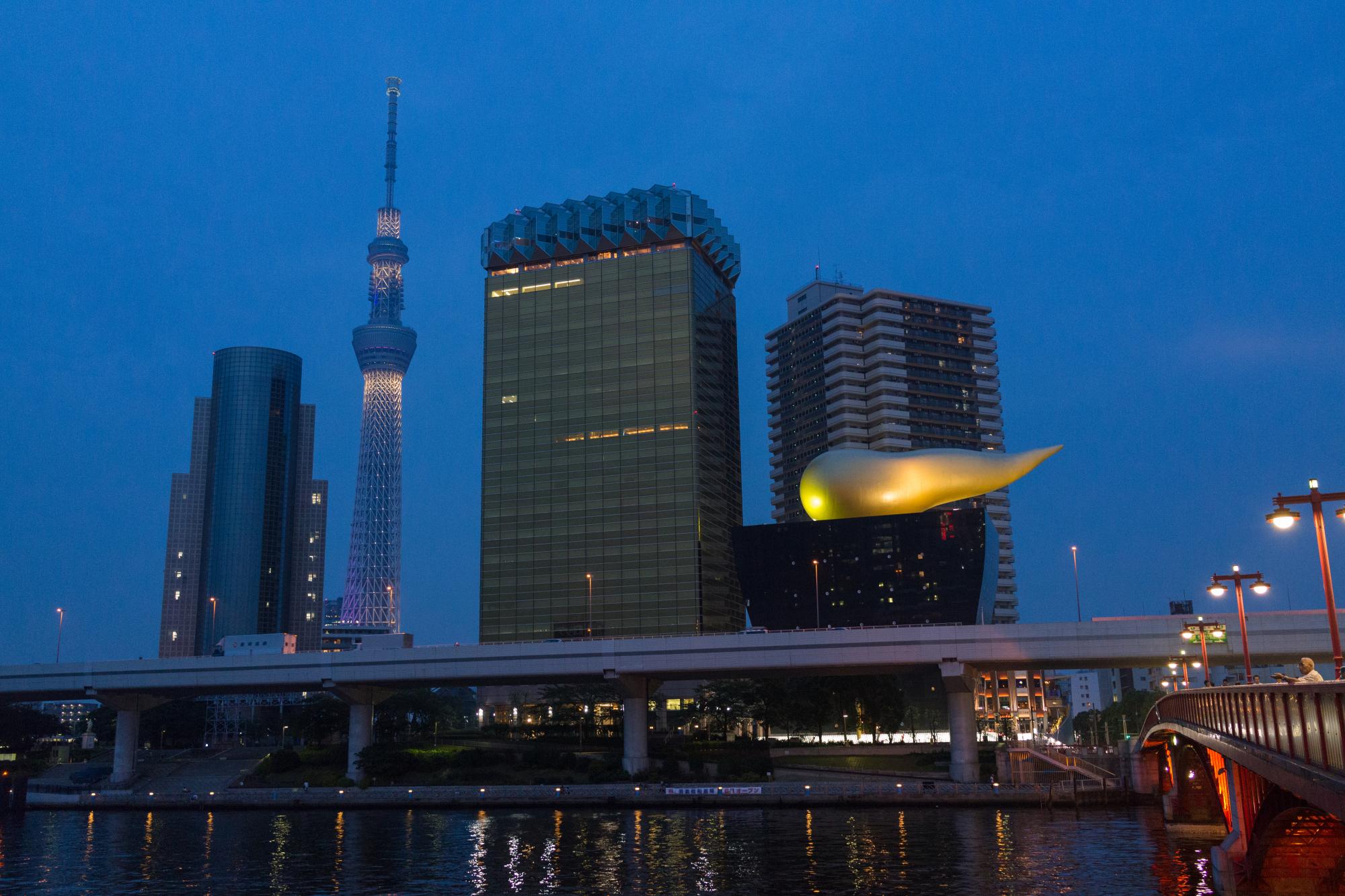 The night view of Tokyo Skytree and Asahi Beer Tower 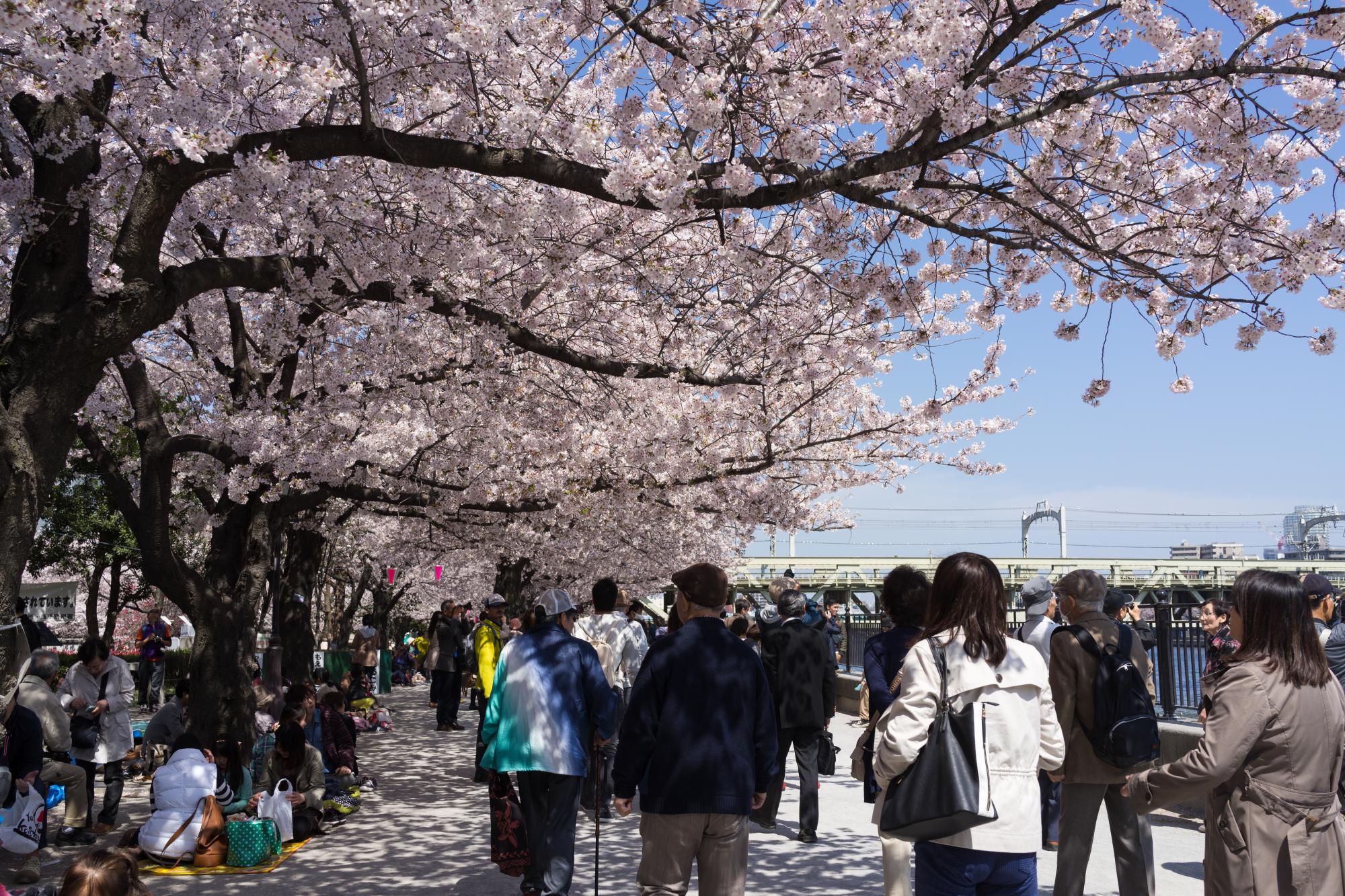 It is the season of cherry blossoms when Sumida Park is crowded the most. Cherry blossoms in full bloom along the Sumida River are worth seeing. It is one of the representative spots for cherry blossom viewing in Tokyo. 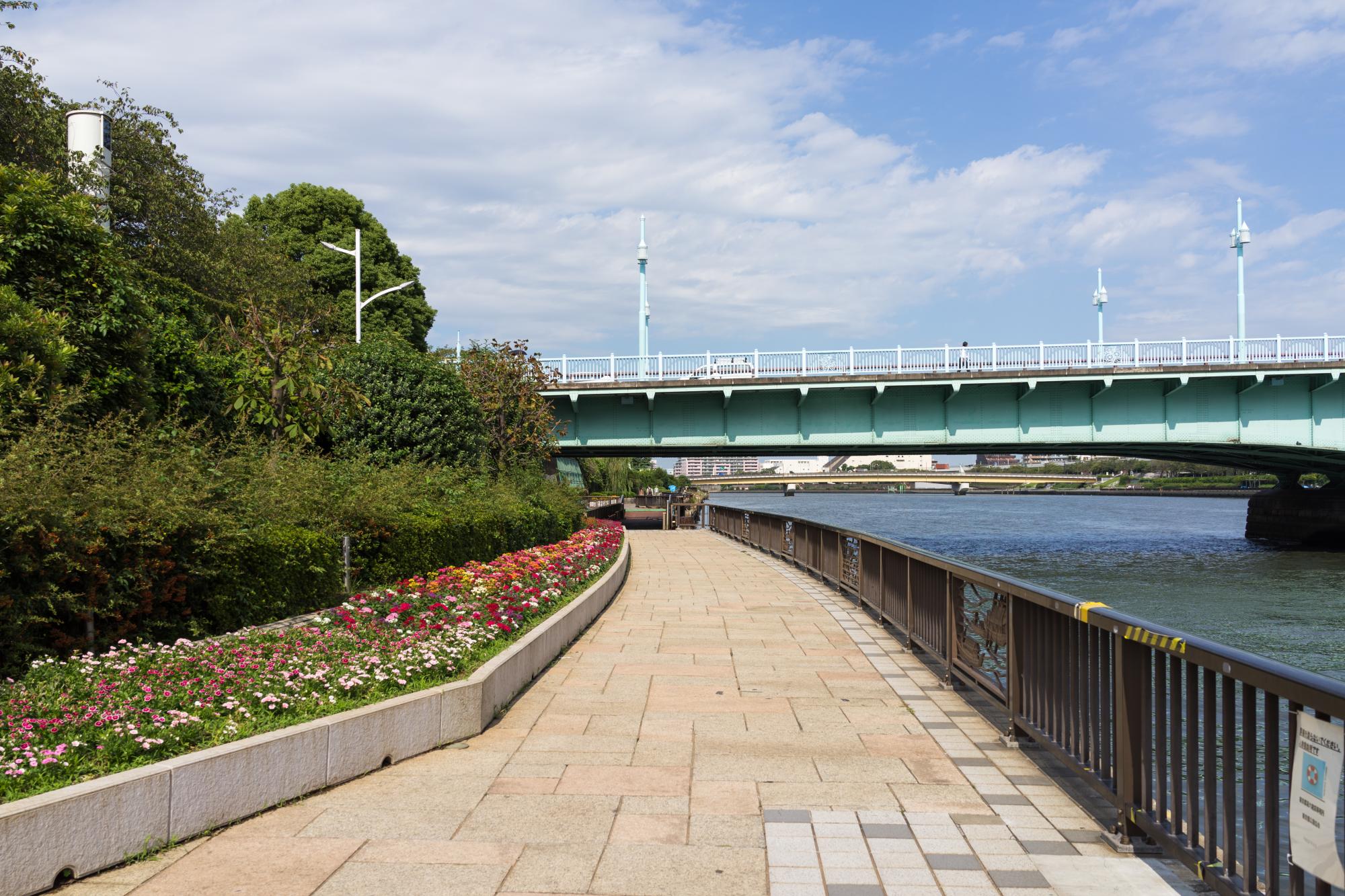 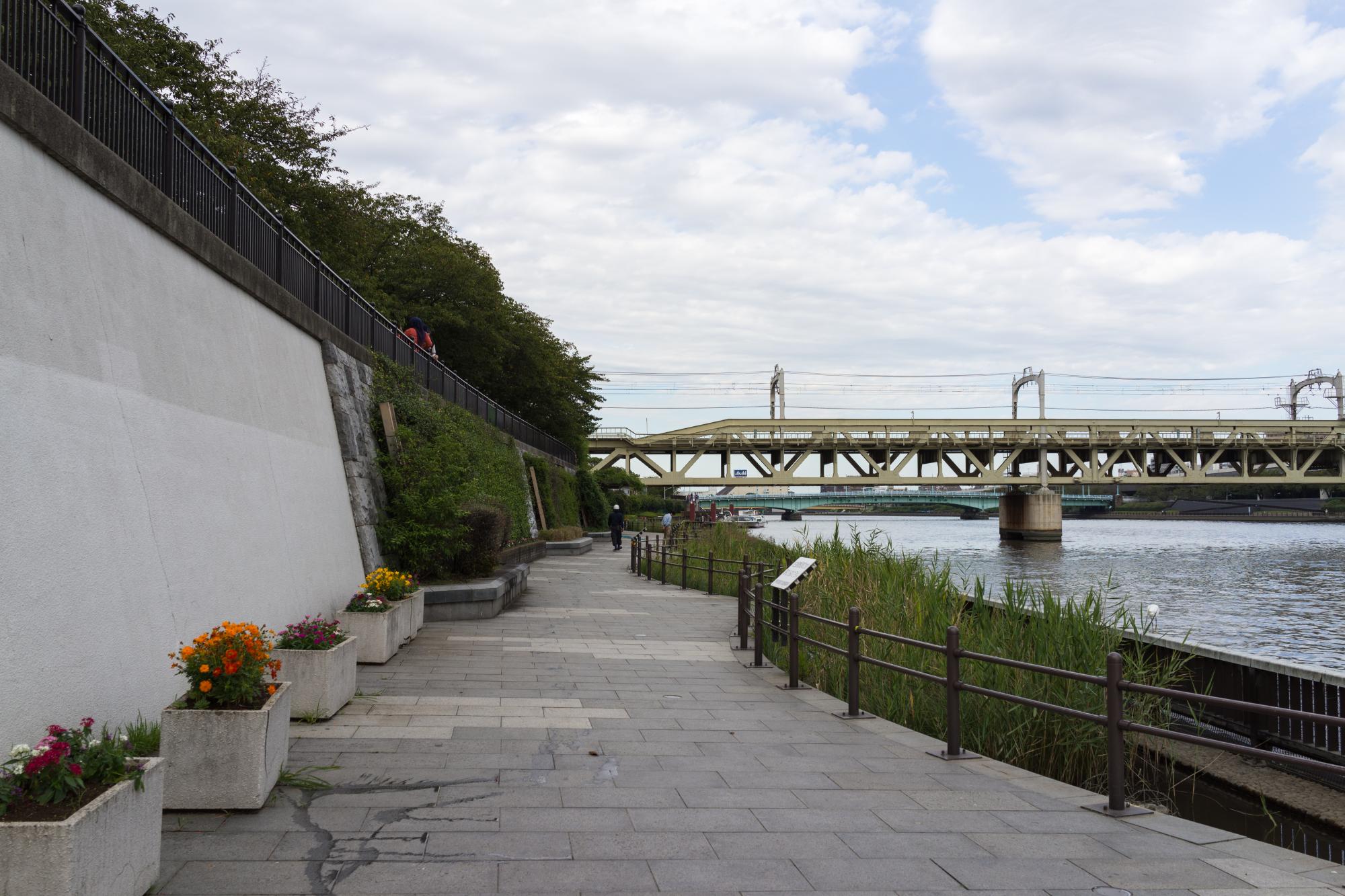