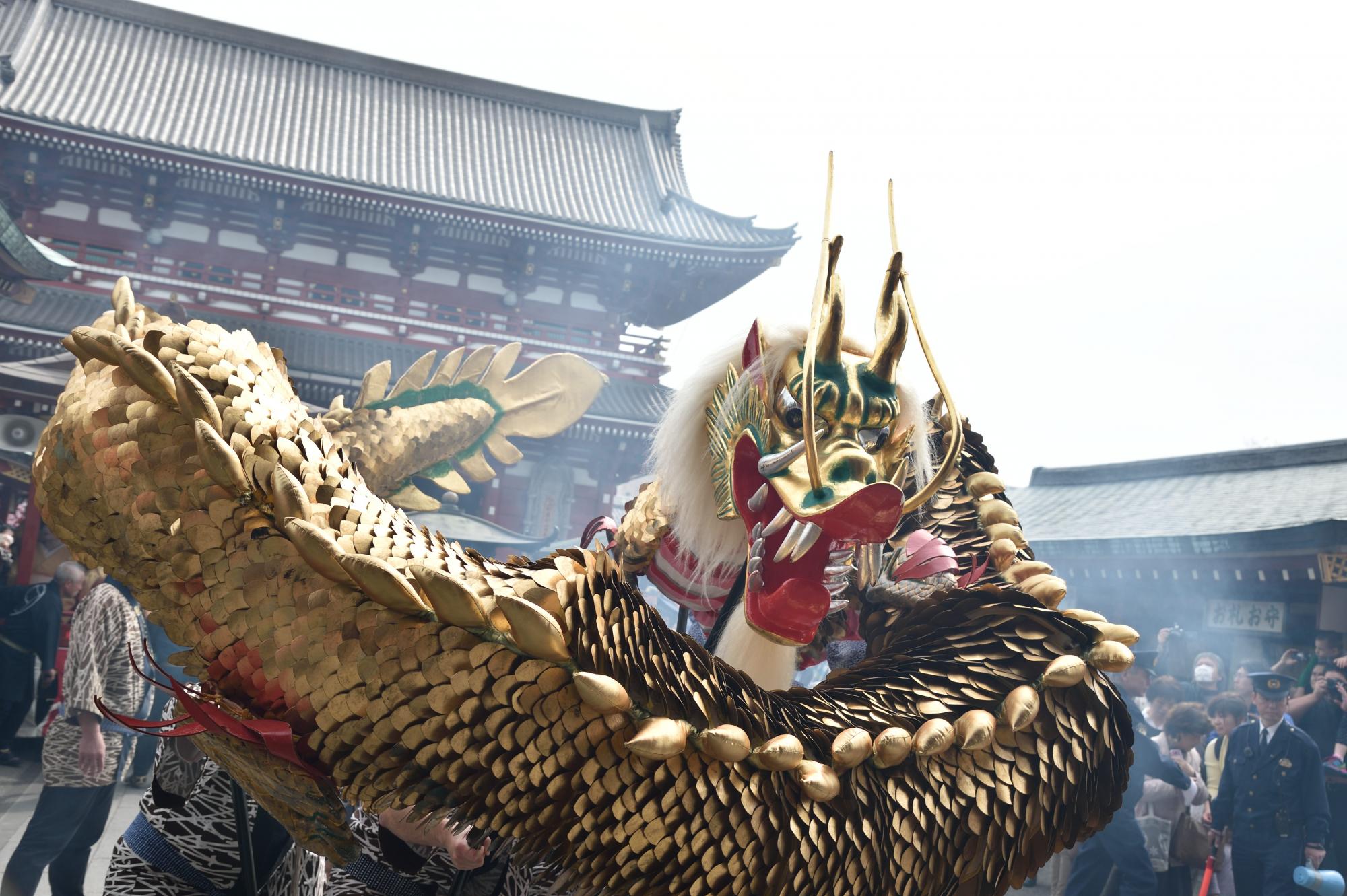 Kinryu no Mai (Golden Dragon Dance) is a legendary dance performed at Kinryuzan Sensoji Temple in Asakusa. One person controls a lotus shaped ball representing Kannon (Goddess of Mercy) and eight people act as Golden Dragons that guard the ball. They perform a powerful and beautiful dance in sync with "hayashi", a form of Japanese music by Geisha (professional female entertainers). The dance symbolizes a real-life dragon entering into our world; it's a spectacular sight to see! The dancers perform at Sensoji Temple twice a year; at the Jigen-e Ceremony (ceremony for Buddha’s appearance in this world) on March 18 and for the Chrysanthemum Memorial Ceremony on October 18. Additionally, as the representative traditional performing art of Tokyo, Kinryu no Mai is also performed at big events such as the Tokyo Marathon. This time I had a chance to talk to the dancers of the "Kinryu no Mai Executive Committee", including the chairperson Mr. Yoshida, and I even got a chance to observe a dance practice up close. The following is some insider information about Kinryu no Mai (Golden Dragon Dance). I will cover what goes on during practice, what kind of people the performers are, and what the performers think about the performance itself. 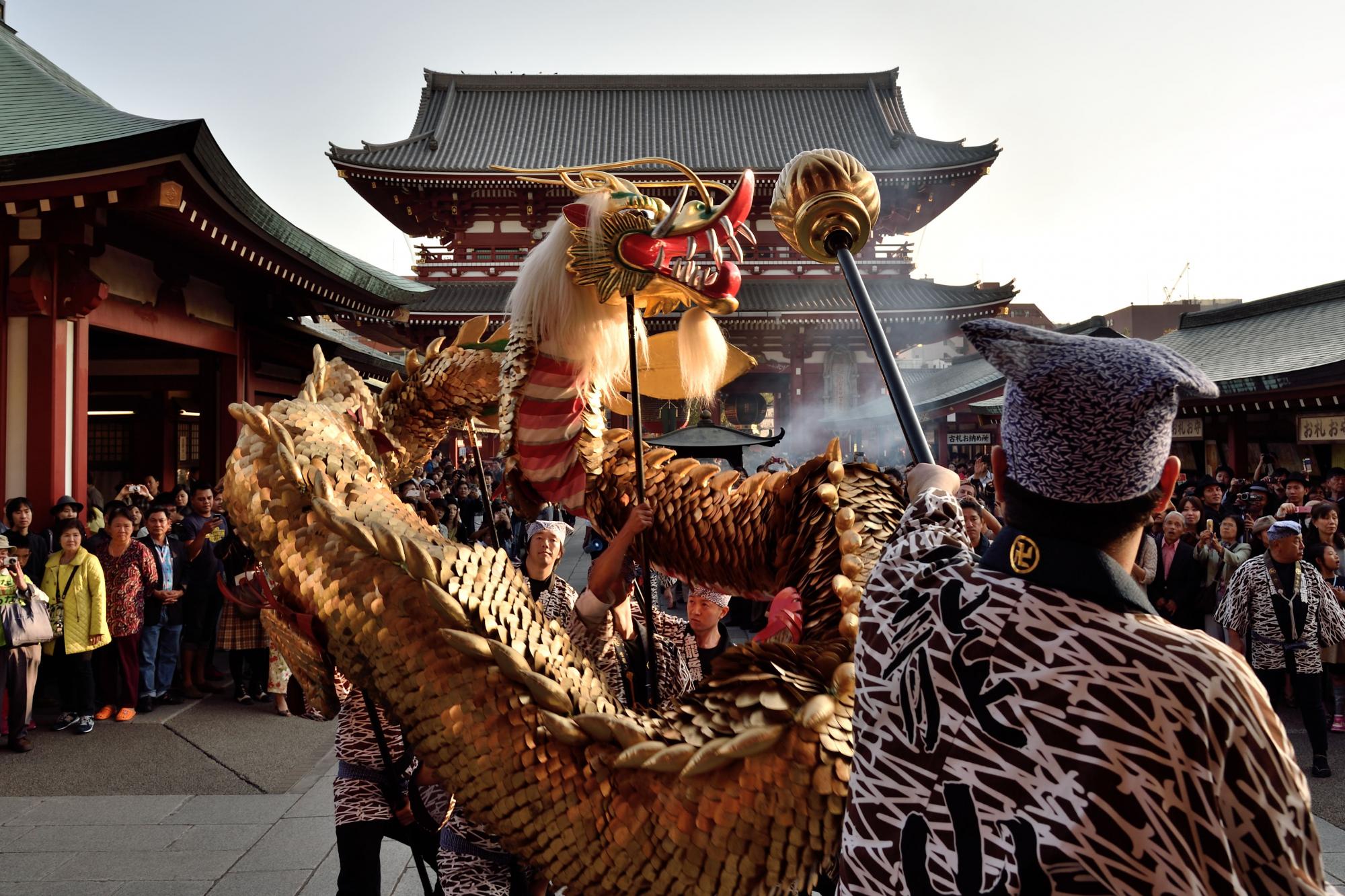 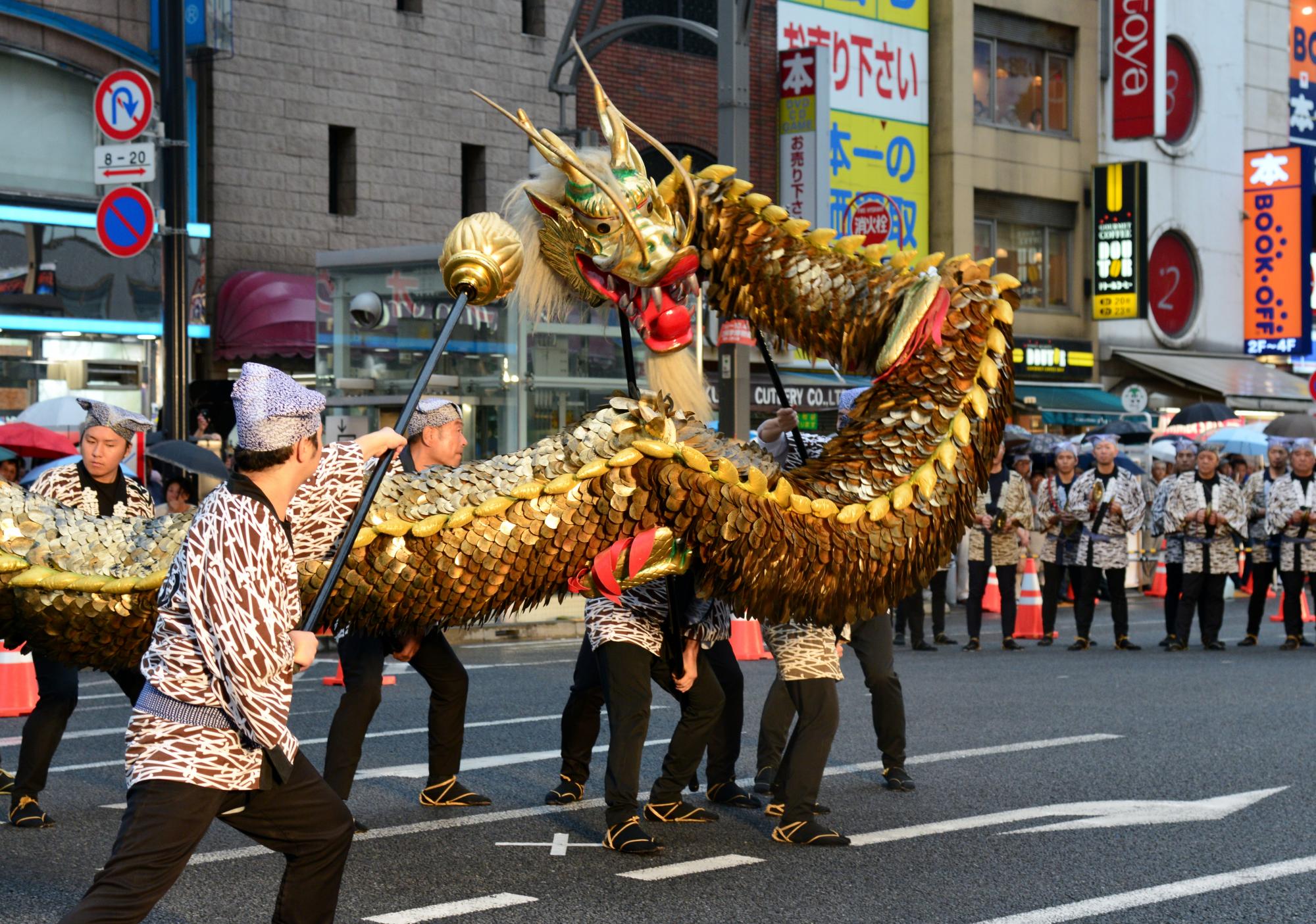 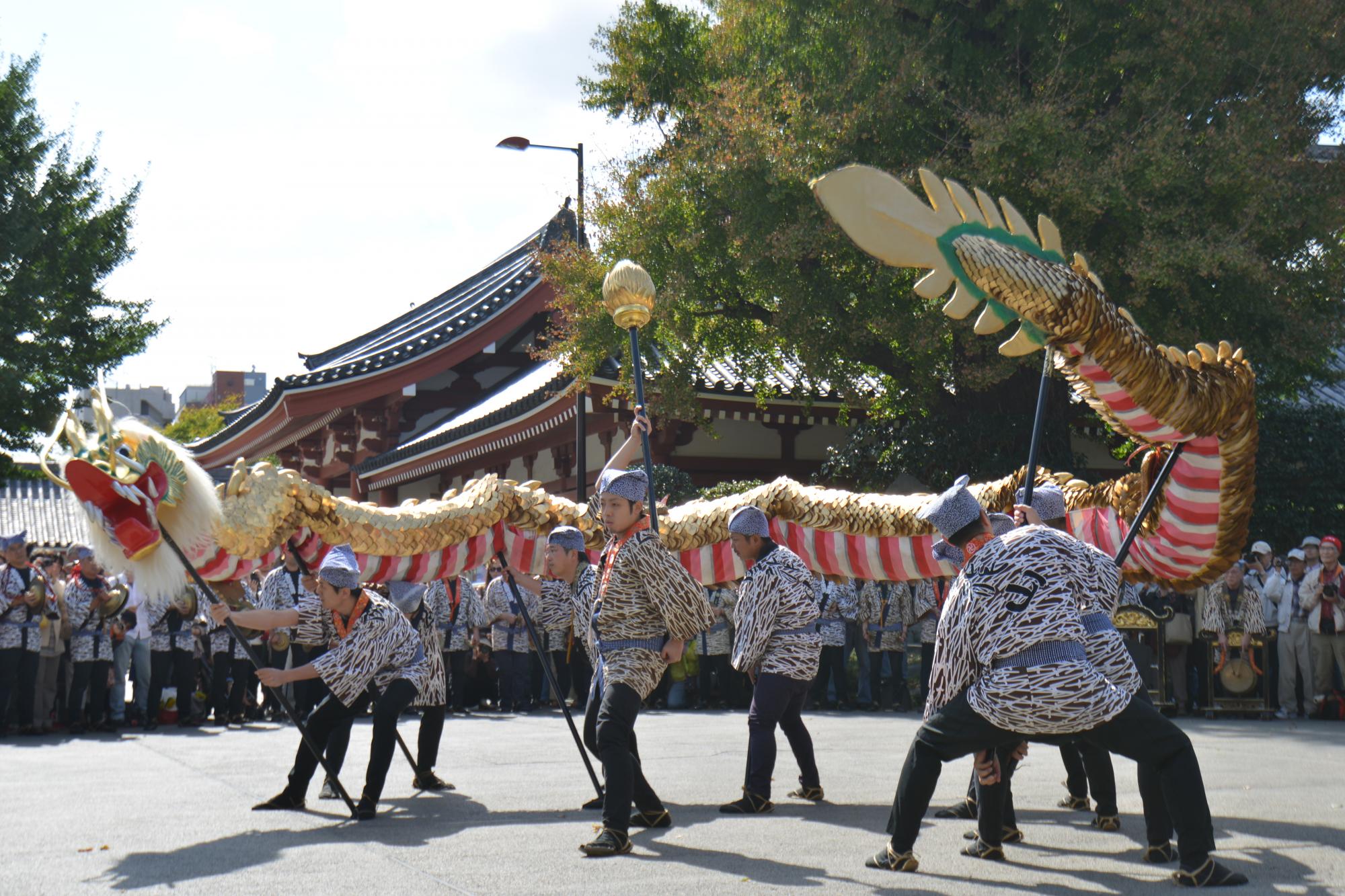 Weighing roughly 88 kilograms, the Golden Dragon is about 18 meters long, and has a total of 8,888 scales along its gilded body. The number “8” is regarded as very lucky for Japanese people, which is why it appears so much in the specifications of the dragon. Kinryu no Mai is held three times a day (11’o clock, 14’o clock and 15’o clock) at the Jigen-e Ceremony (ceremony for Buddha’s appearance in this world) on March 18 and during the Chrysanthemum Memorial Ceremony on October 18. The Golden Dragon departs from Denpoin Temple, and parades through Nakamise Street, heading towards the Main Hall. In addition to the Golden Dragon, Matsu-jido (Sensoji kindergarteners dressed up as pine trees) and Geisha (professional female entertainers) on a float join the parade. The Geisha play "hayashi" (a form of Japanese music) using "shamisen" (a long three stringed Japanese guitar played with a plectrum) and a Japanese flute. The uniquely Japanese instruments and attire make for a beautiful parade. After they arrive at the front of Main Hall, the Geisha play a song called "Kannon-bome" (song praising Kannon) and Kinryu no Mai is performed vigorously for ten minutes in concert with Japanese musical instruments such as Myobachi and Dora. During the 11’o clock performance, Kaigen-e (the ceremony for opening the eyes of the Golden Dragon) is held in the Main Hall before the performance. 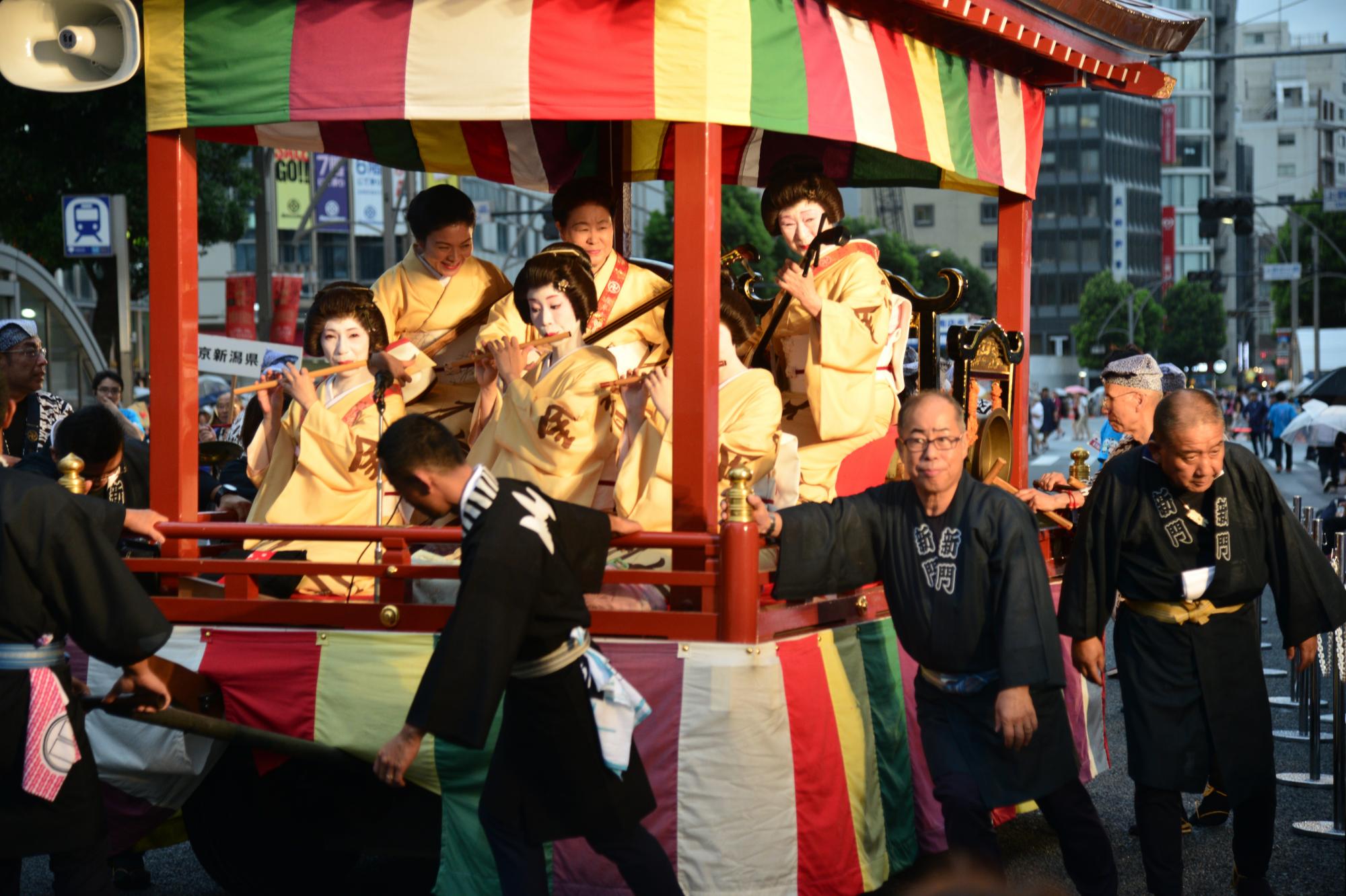 Kinryu no mai (Golden Dragon Dance) was produced in commemoration of the October 1958 reconstruction of the Main Hall. Kinryu (Golden Dragon) is a dragon god and protector of Buddhism. It is also a "Sango" (honorific title prefixed to the name of a Buddhist temple). According to Sensoji Engi (the legend of Sensoji Temple), when Kannon appeared in this world, the Golden Dragon came from the sky and one thousand pine trees appeared in one night. To create a dance that lived up to the legend, the dance was produced under the guidance of Mantaro KUBUTA, an Asakusa resident and playwright. Eminent traditional Japanese music players were also involved in the founding of the dance: Kasho MACHIDA wrote music and Choichiro MOCHIZUKI taught narimono (wind instruments and percussions). Furthermore, Tomoaki FUJIMA, a dancer from the FUJIMA School, one of the five greatest schools of Classical Japanese dance, produced the choreography. Kinryu no Mai consists of both active and static dance and it is the smooth transitions between the two forms that really make it a mystical, powerful, and beautiful dance. Additionally, the dance has been passed down from generation to generation and has been preserved to be exactly like the original throughout the years. Kinryu no Mai is a Buddhist service, so the dancers perform the dance wearing a Buddhist priest's stole. The color of the stole changes depending on how long the dancer has remained in service. The dancers all aim to one day wear the red stole; which represents over 10 years of service. 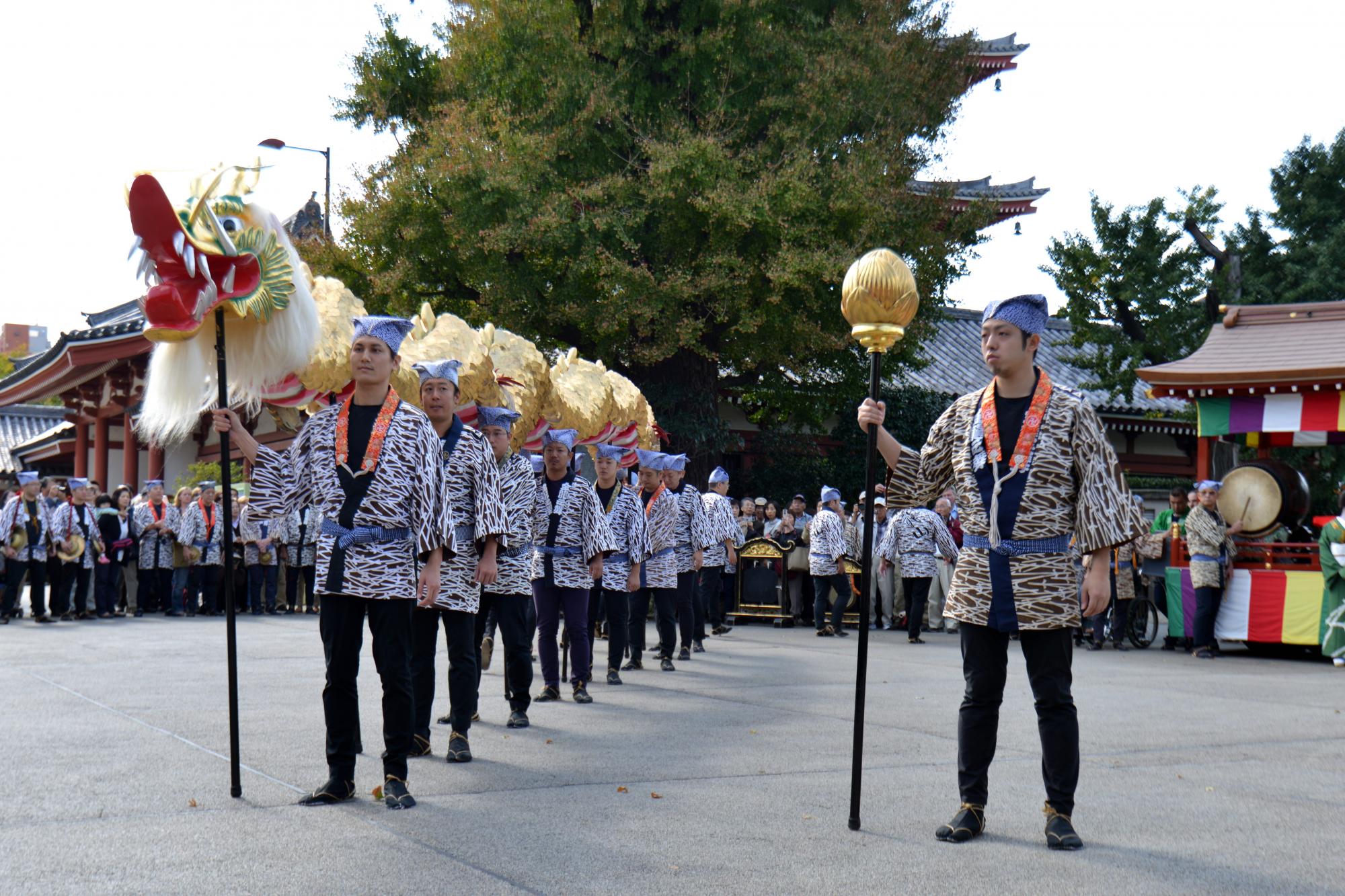 Kinryu no Mai (Golden Dragon Dance) is performed by nine people (one person for the lotus shaped ball and eight people for the Golden Dragon). The dancers are people from the "Kinryu no Mai Executive Committee". A wide gamut of ages, from teenagers to those in their 80's, belong to the committee. There is even a family that has had three generations of dancers participate in the committee!
Sensoji Temple is located in the center of Asakusa and for the residents of Asakusa it is a great honor to perform Kinryu no Mai. However it is not an easy road. First, the dancers must participate in the intensive training camp held every August at least twice. In other words, no matter how good a dancer is, they can’t perform until at least 2 years pass after joining the committee. Furthermore, the dance is performed three times at each ceremony so no more than 27 people can perform each time (the ceremony is held twice a year). About 100 people belong to the committee so it is a very competitive atmosphere. The dancers are unbelievably nervous the first time around but they say the sense of relief and accomplishment after the dance is completed is indescribable. Dancers usually reach their peak around age 35 to 40 and about 1 year after their peak they retire. This is because after realizing their peak potential, many dancers find it mentally tough to dance knowing that they aren't at their best. Many dancers commit their lives to Kinryu no Mai and there are various emotional moments from the moment that they dance for the first time, to when they retire. 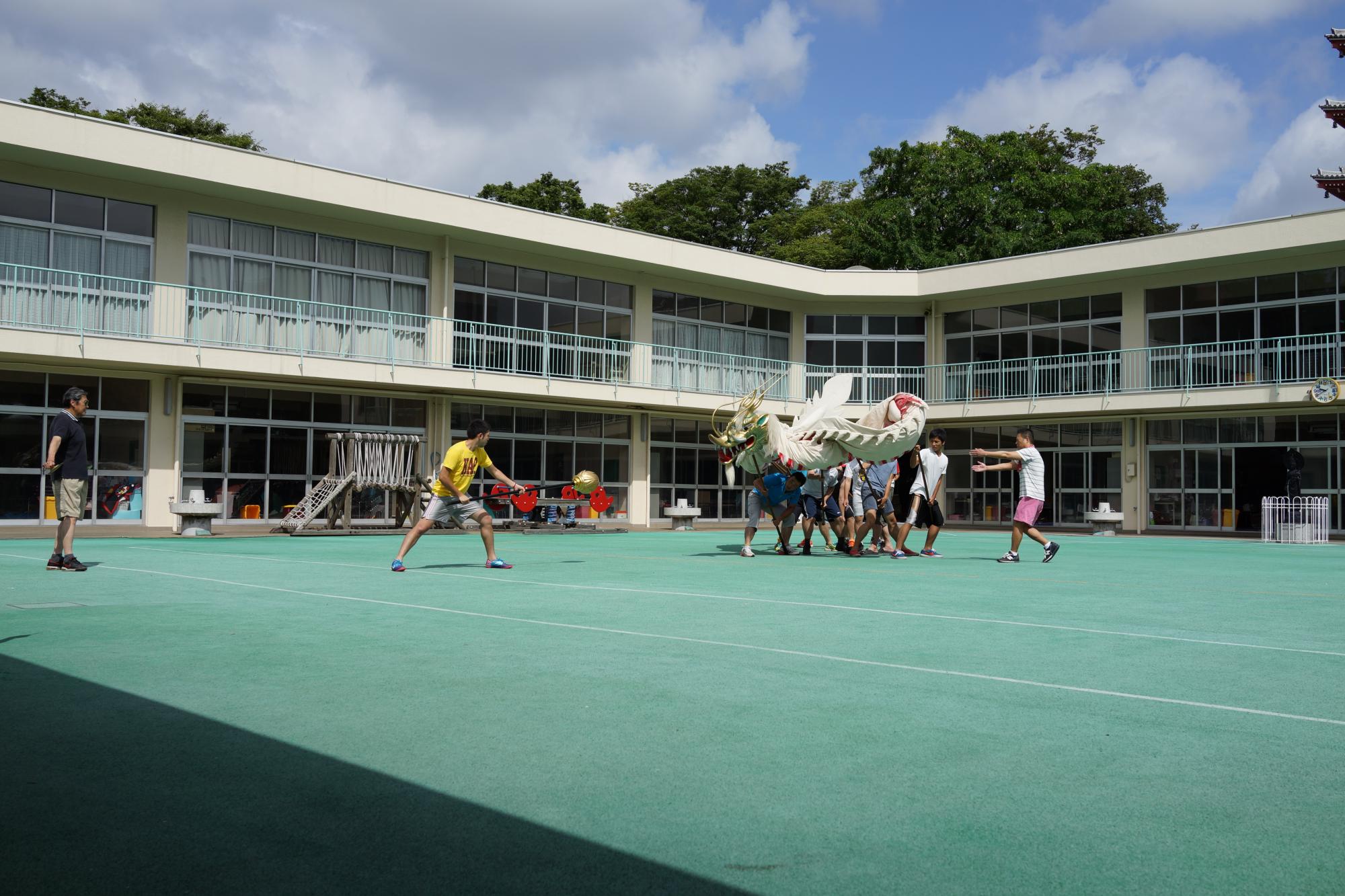 The nine dancers of Kinryu no Mai (Golden Dragon Dance) are all assigned a role. For example, the first dancer of the Golden Dragon group (in charge of the head) represents the "face" of the dance and the second dancer controls the dragon's body. The third and sixth dancers are in charge of expressing the profound nature of the dance. The forth and fifth dancers perform at the center of the Golden Dragon. The head passes between them, so they must work well in tandem. The seventh and eighth dancers (in charge of the tail) express the Golden Dragon’s emotions.
The dancers must master the movements of the dance by March 18 and October 18. The Kinryu no Mai Executive Committee undergoes intensive training during the summertime and also during the days leading up to the ceremonies.
Every year in late August the committee holds a training camp at Sensoji kindergarten in the precincts of Sensoji Temple and the dancers train intensively from dusk until dawn. In the morning, they memorize the movement of the dance using a fabric that is only one fifth the weight of the genuine Golden Dragon, and in the afternoon they practice using the genuine Golden Dragon. The training is very strenuous because each dancer has to bear at least 10 kilograms throughout the dance. The dancers practice four to five times in the morning and the afternoon. The main purpose of the practices is to enhance the abilities of all the members in the committee. To this end, experts are often teaching younger members and newcomers.
In the days leading up to the ceremony, three days of intensive training are held for the chosen members of the dance. 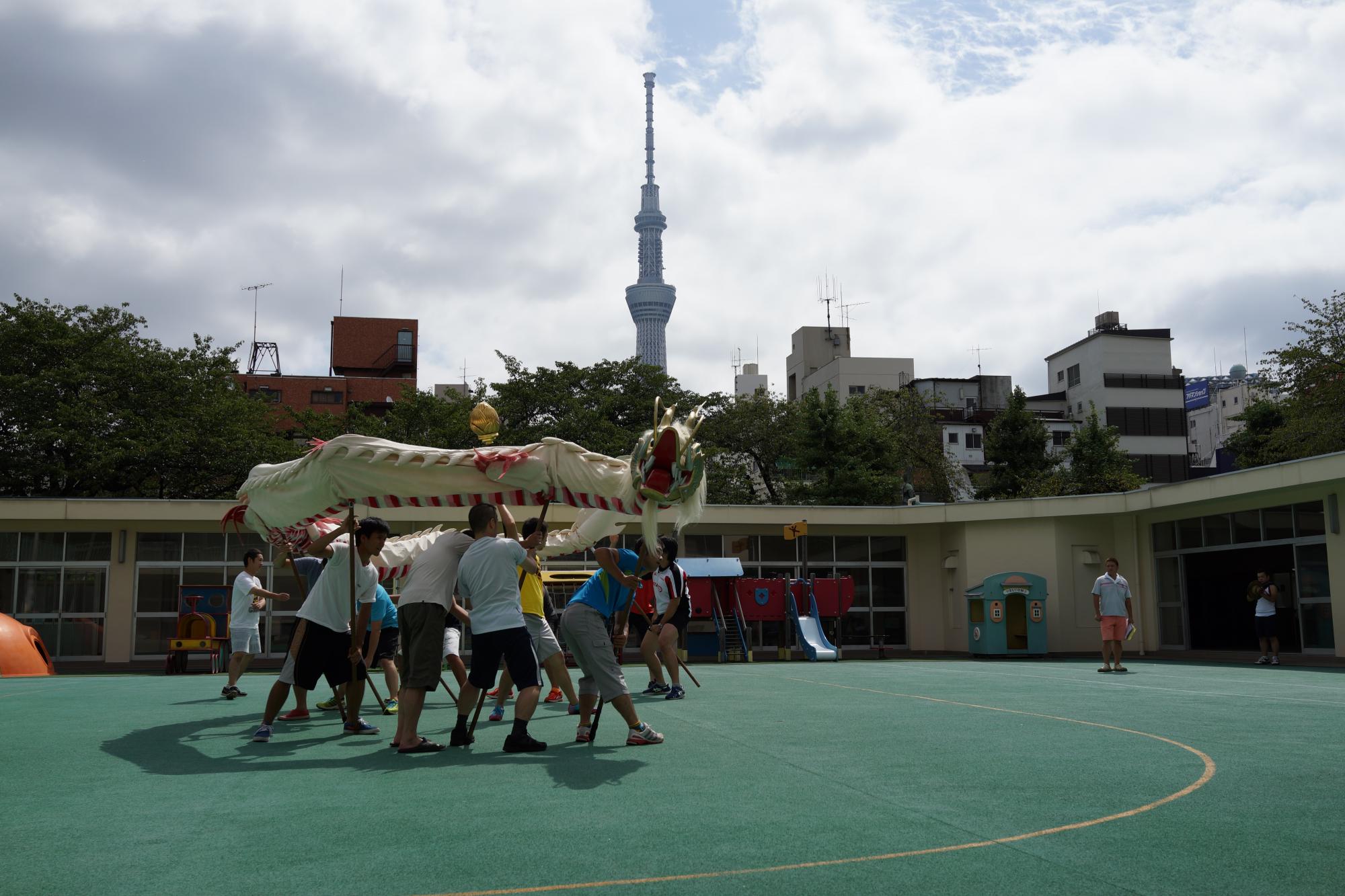 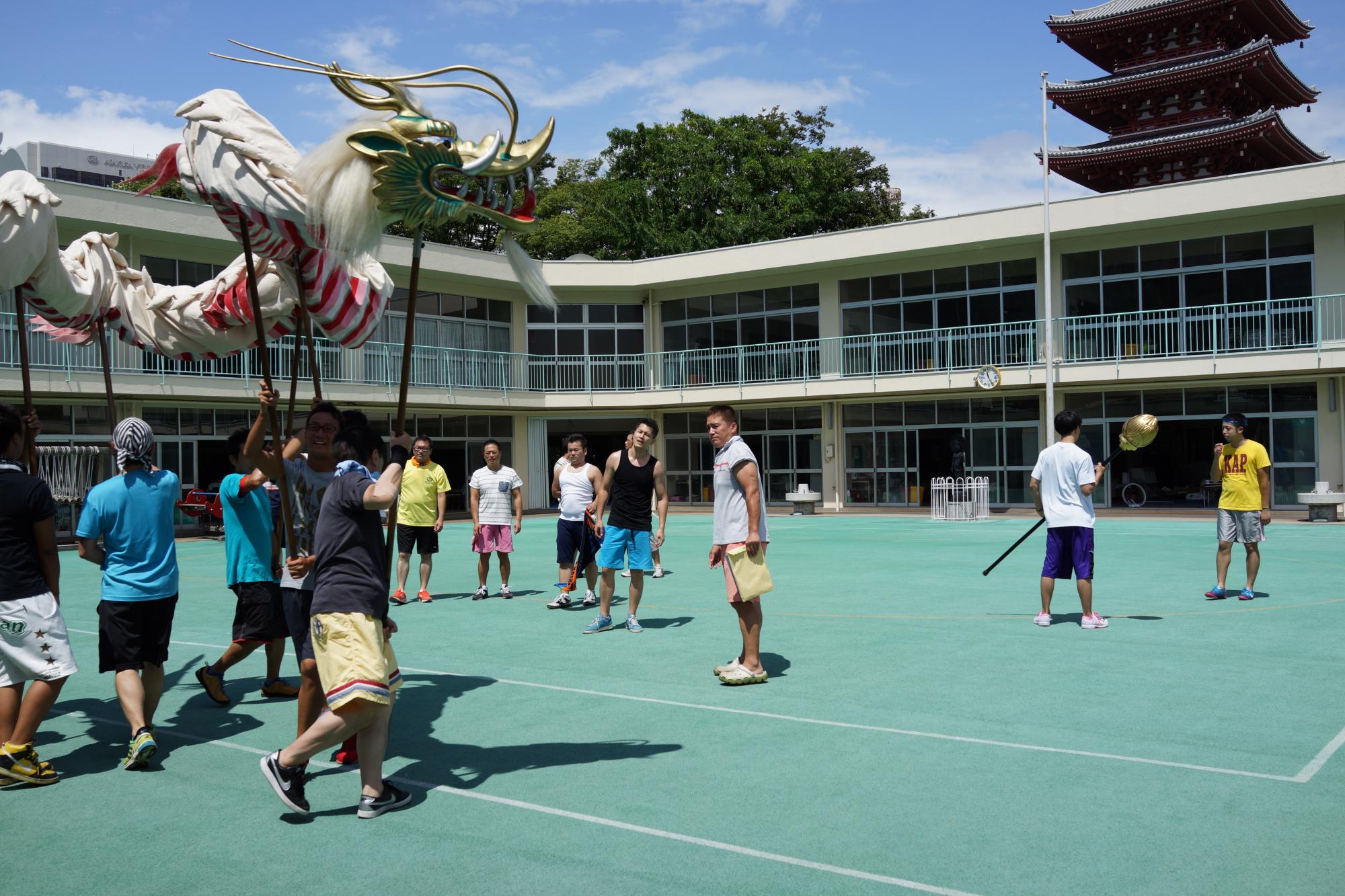 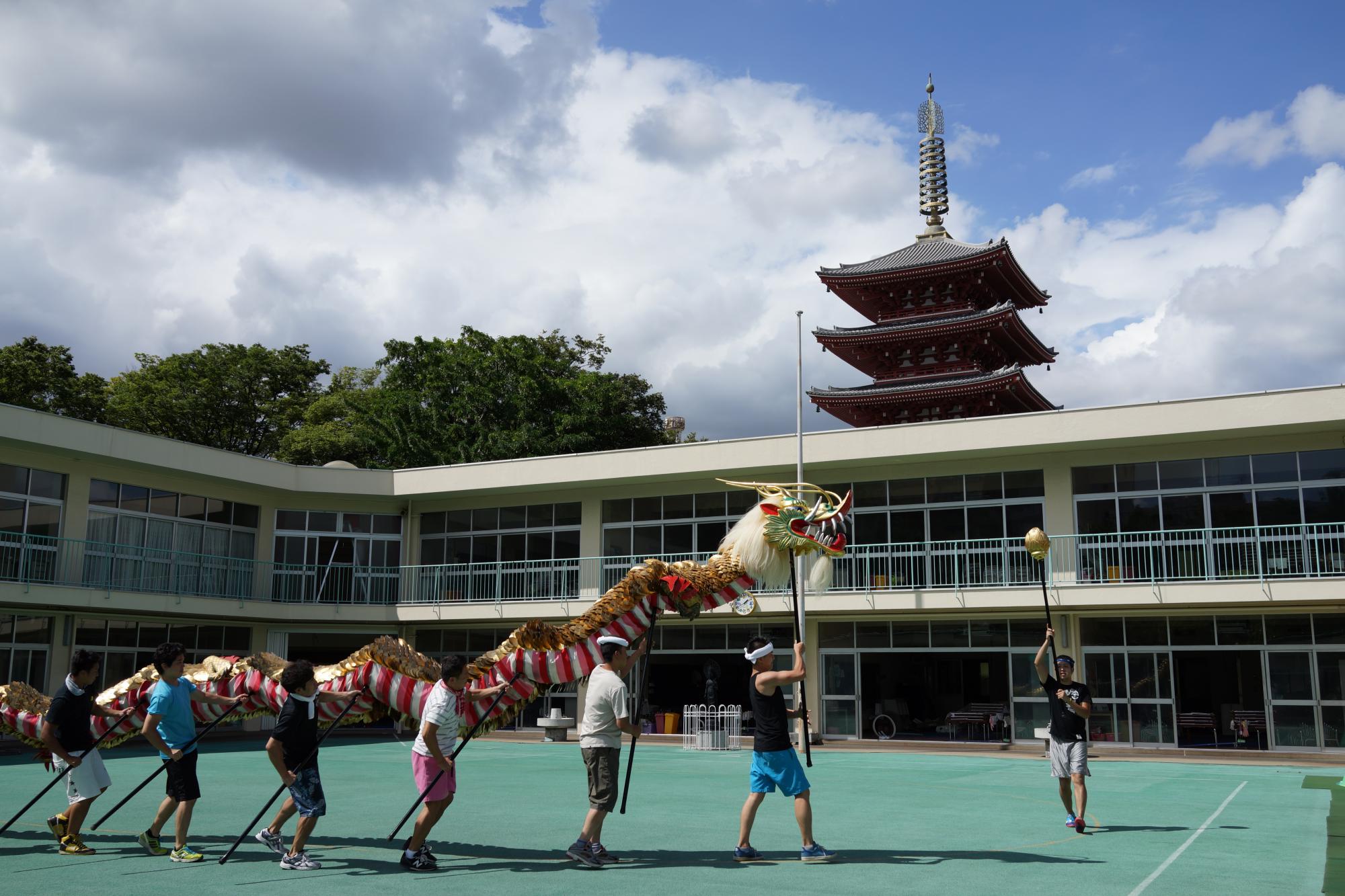 Kinryu no Mai (Golden Dragon Dance) is the representative dance of Sensoji Temple. The spirit and beauty of the dance is certainly a sight to see! The individual stories and passions of each dancer further enhances the experience of Kinryu no Mai. If you're around the Tokyo area on March 18 or October 18 I highly recommend you go to see Kinryu no Mai in Asakusa. 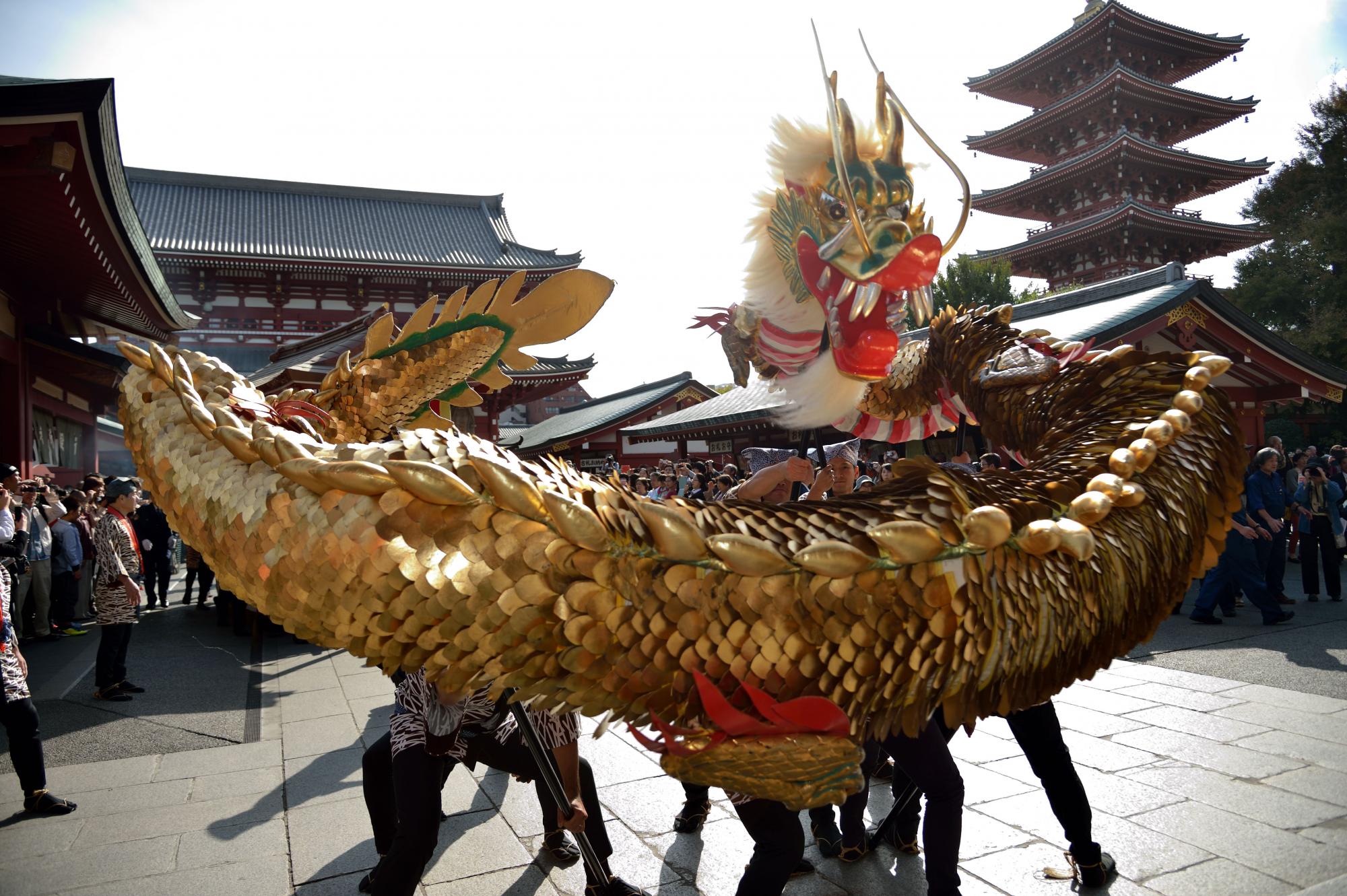 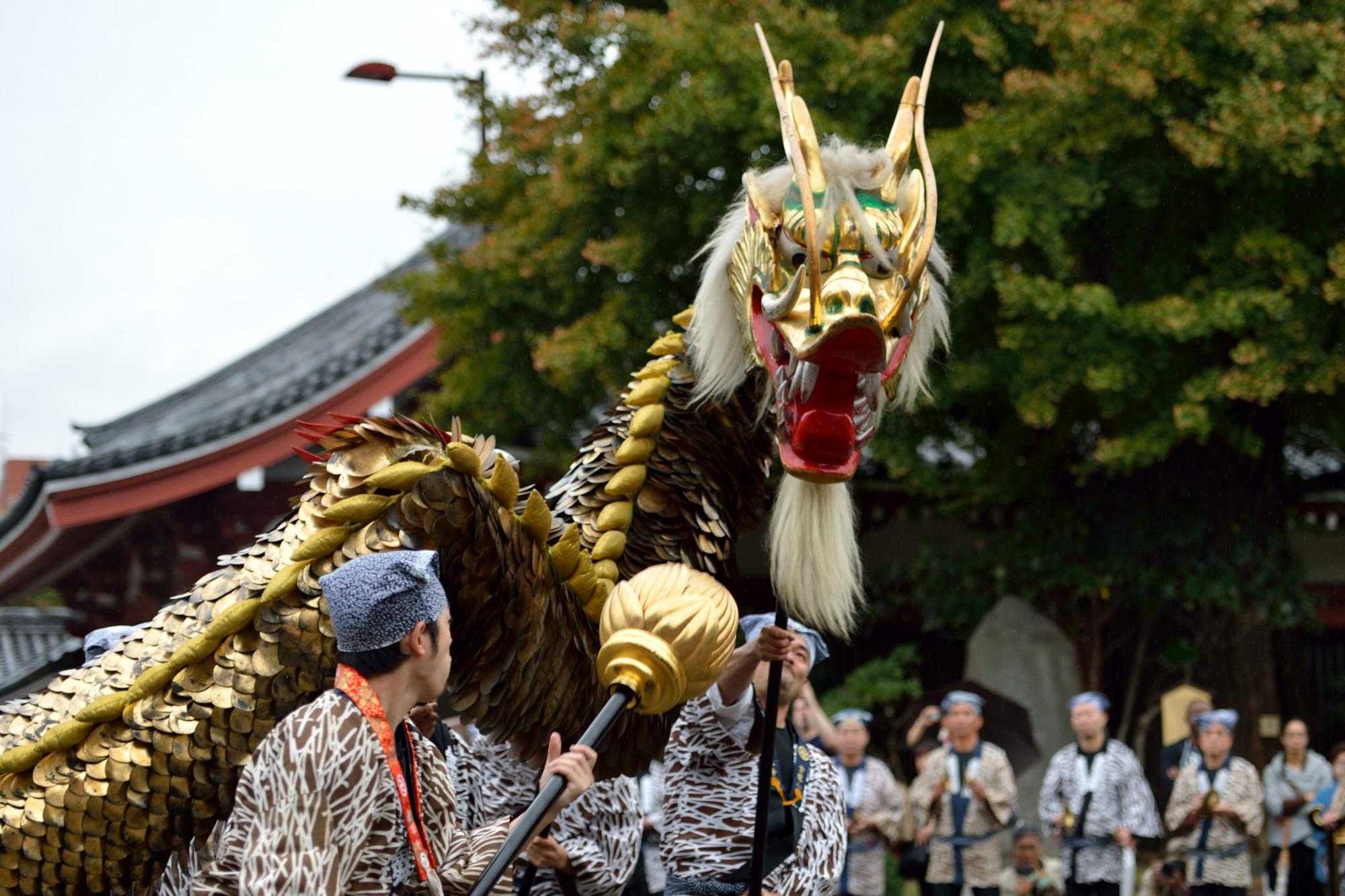 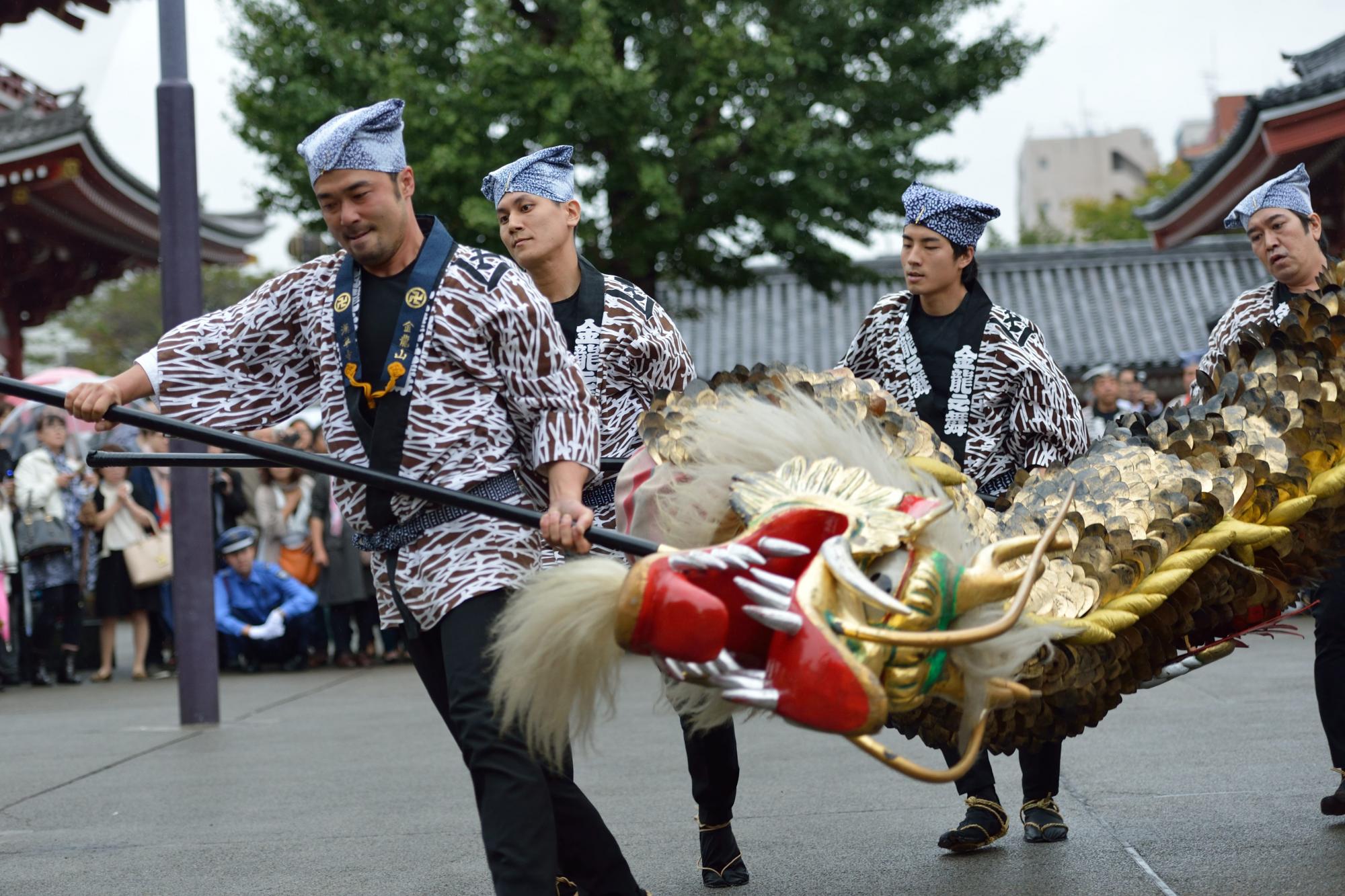 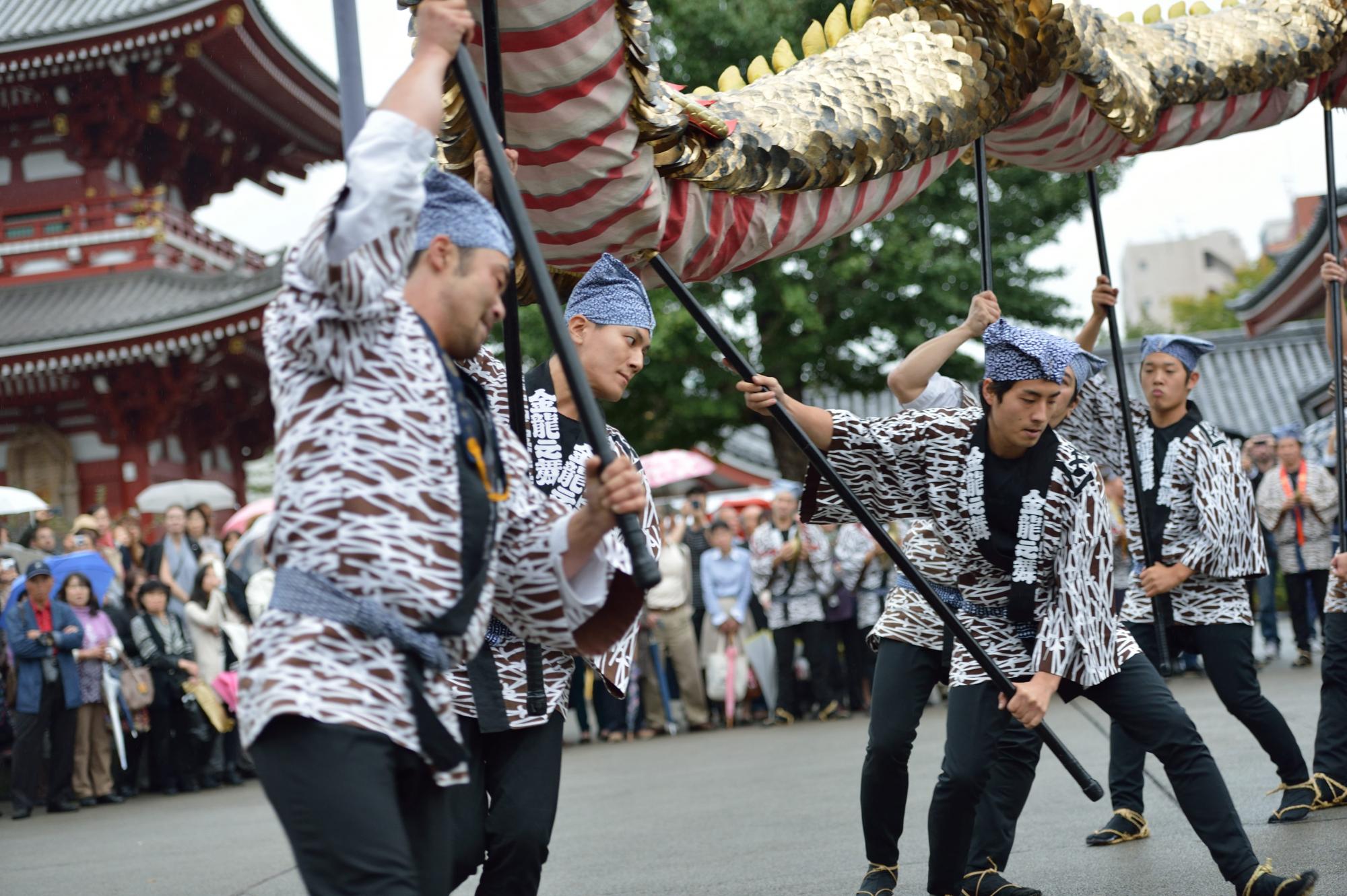 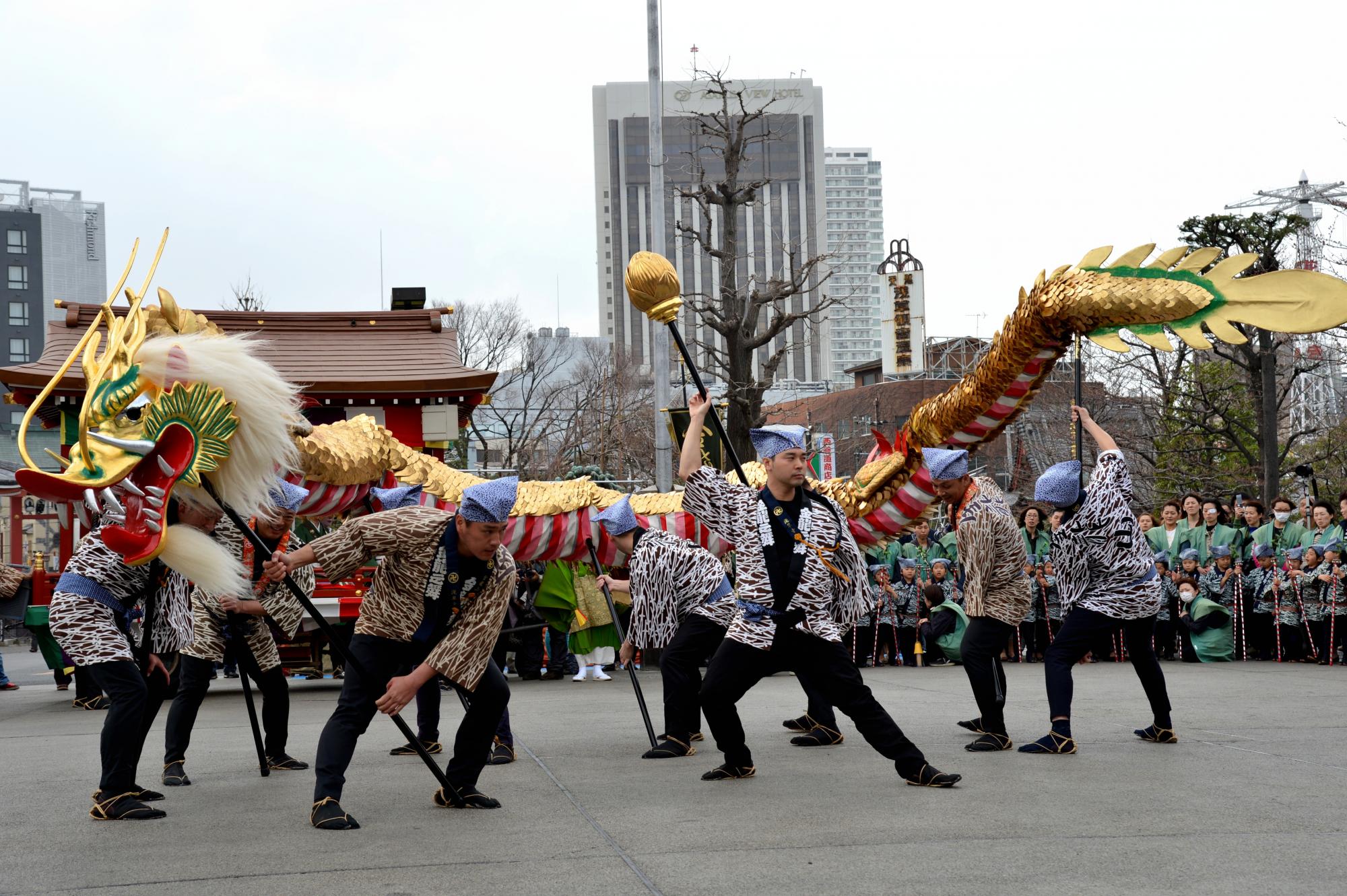 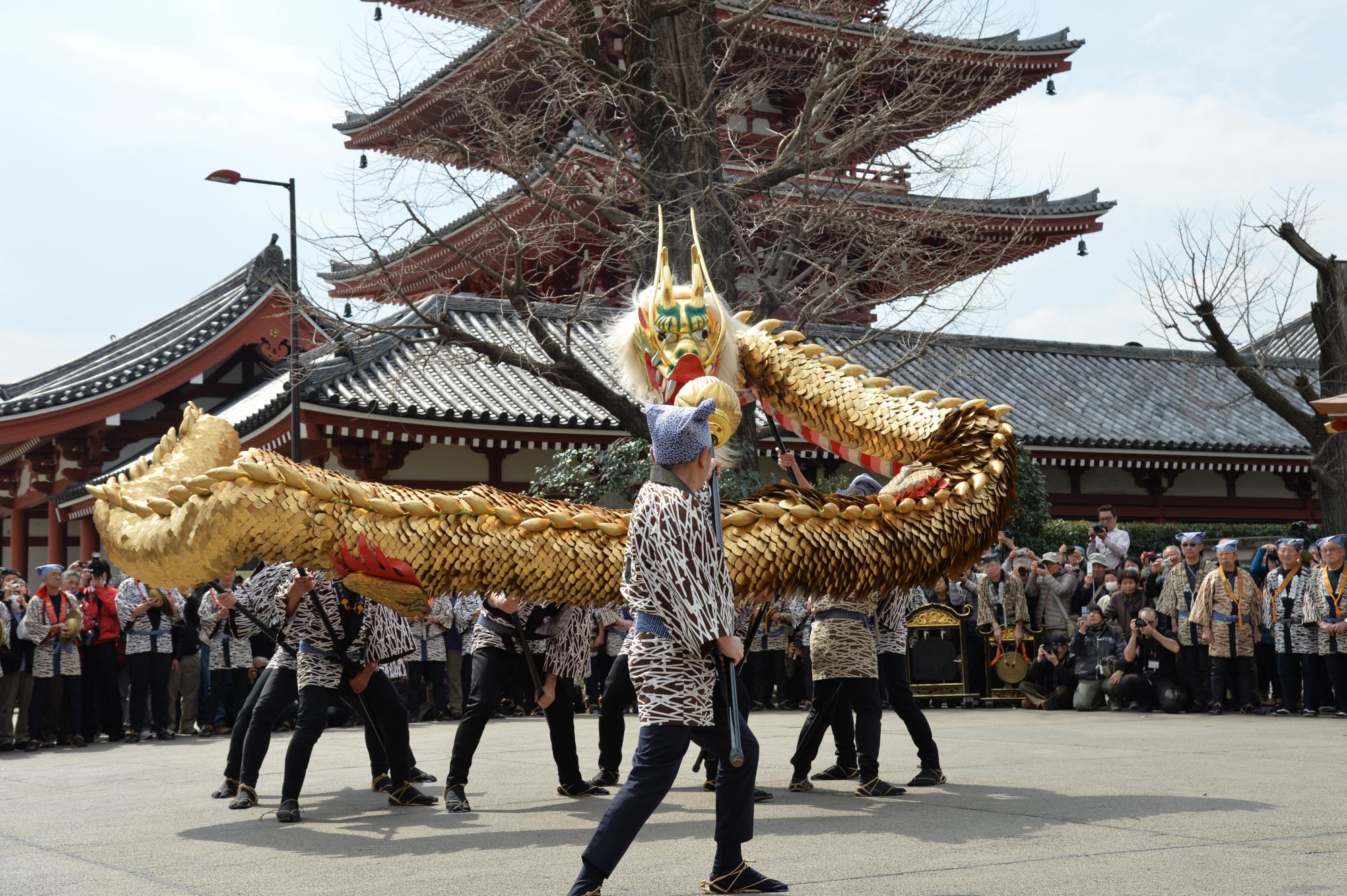 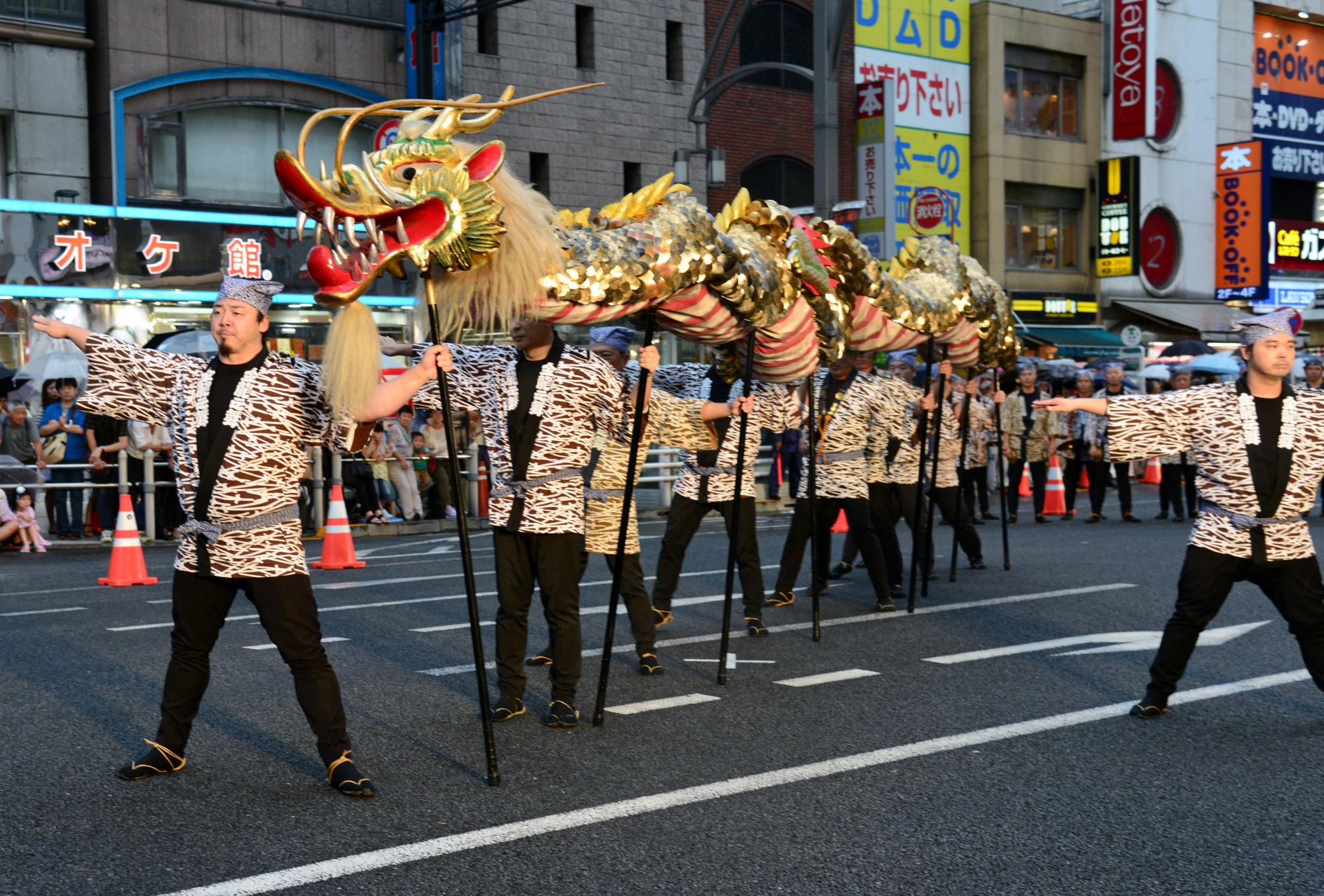 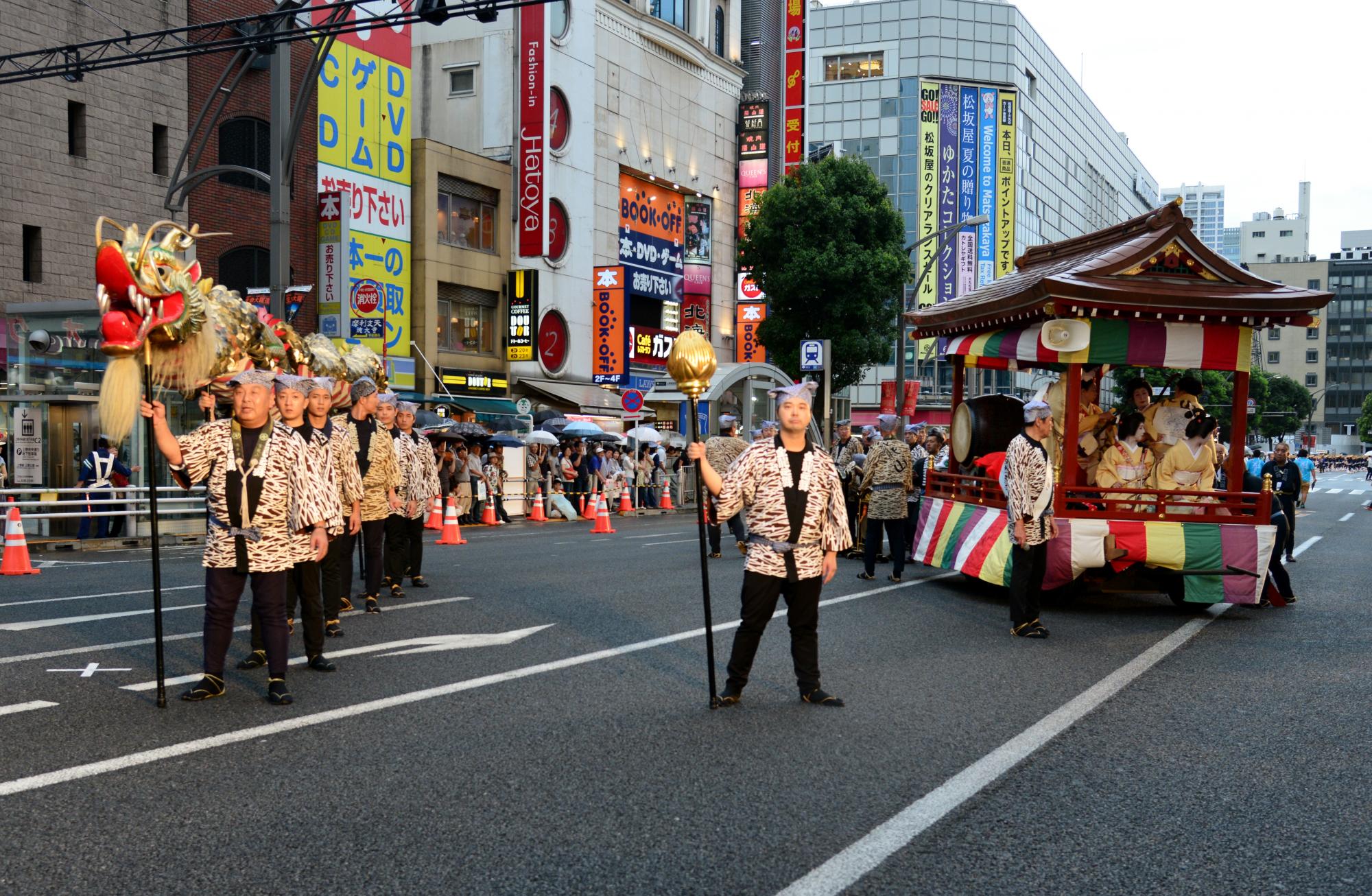 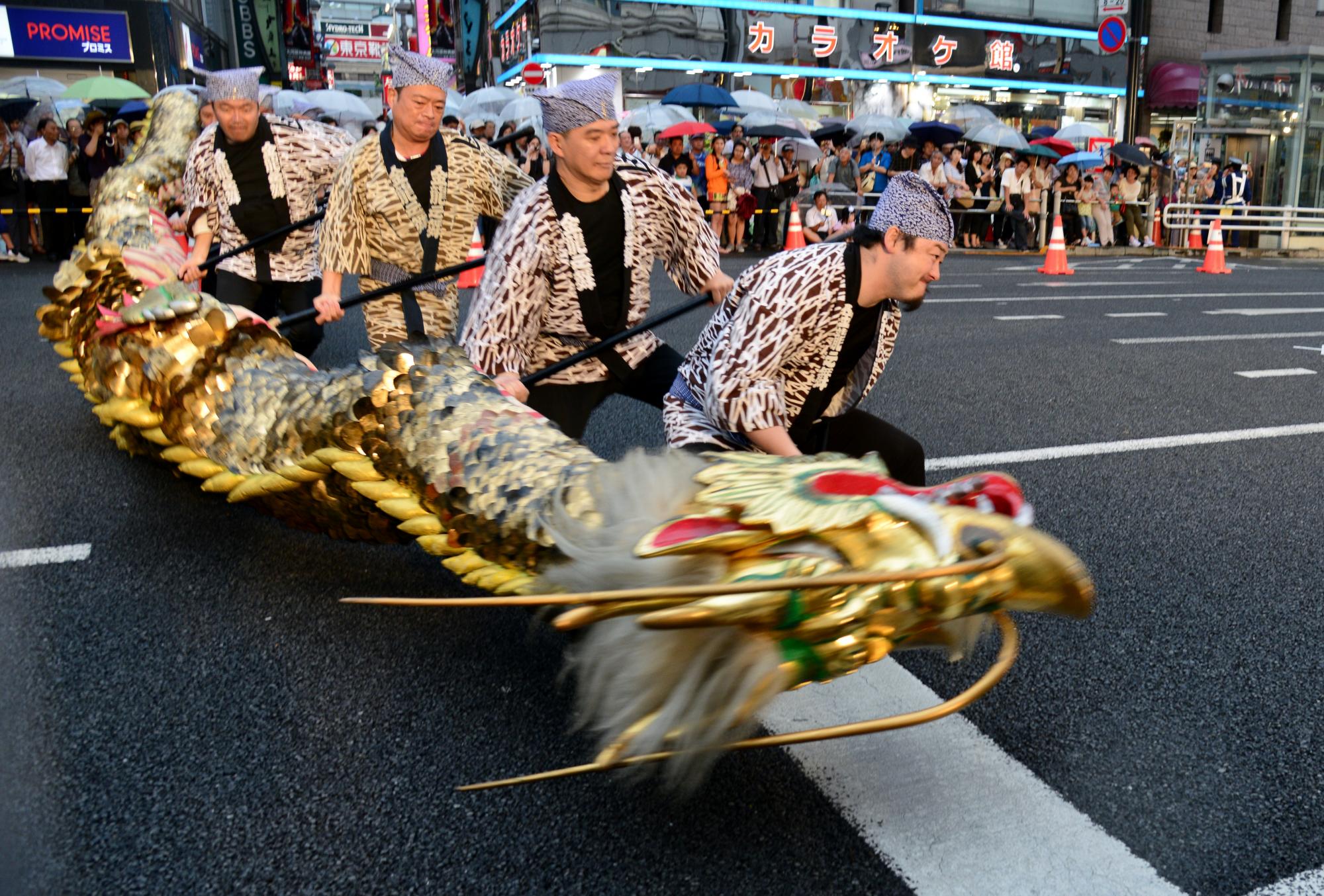 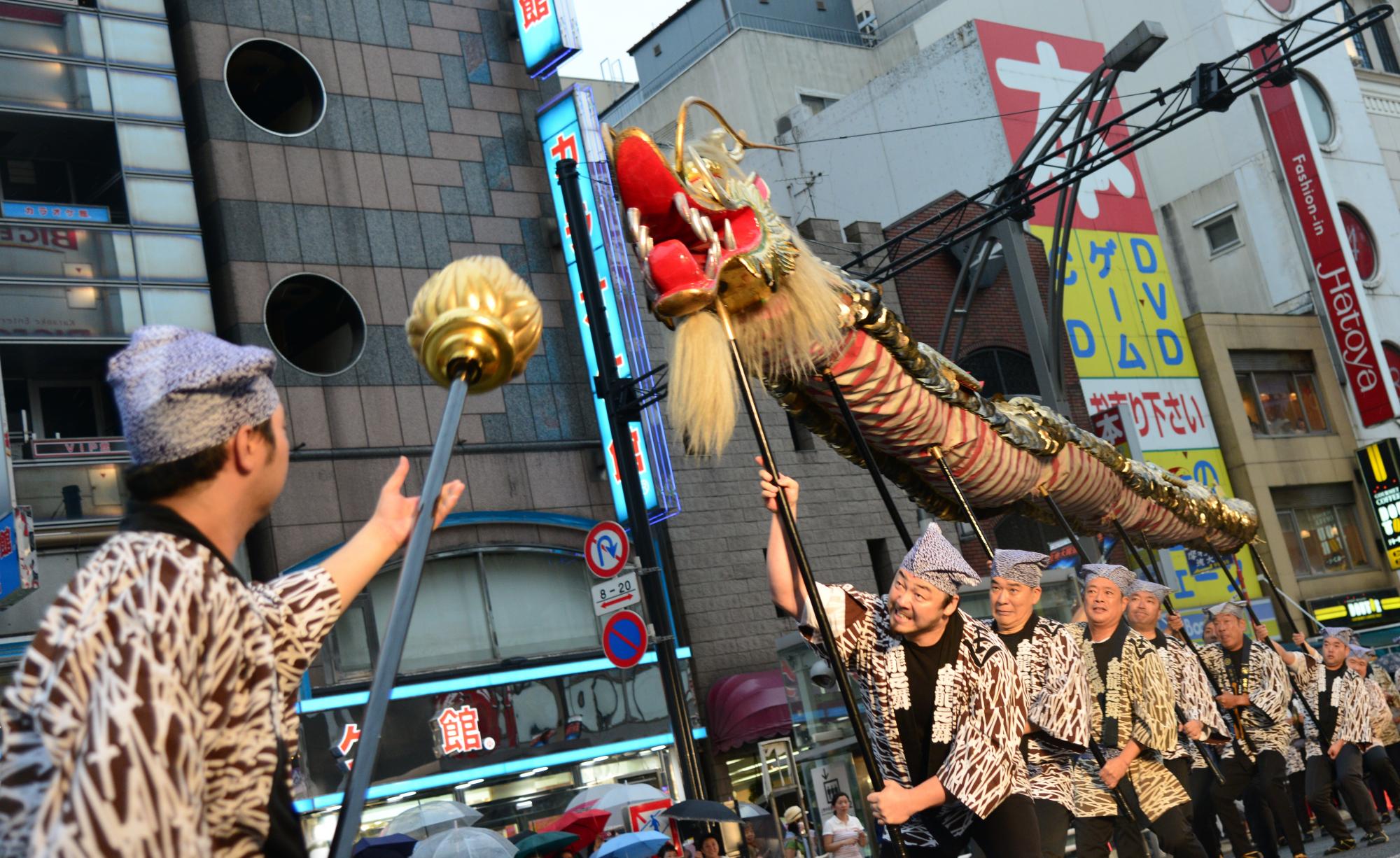