Namiki Yabusoba: an old and popular restaurant in Asakusa 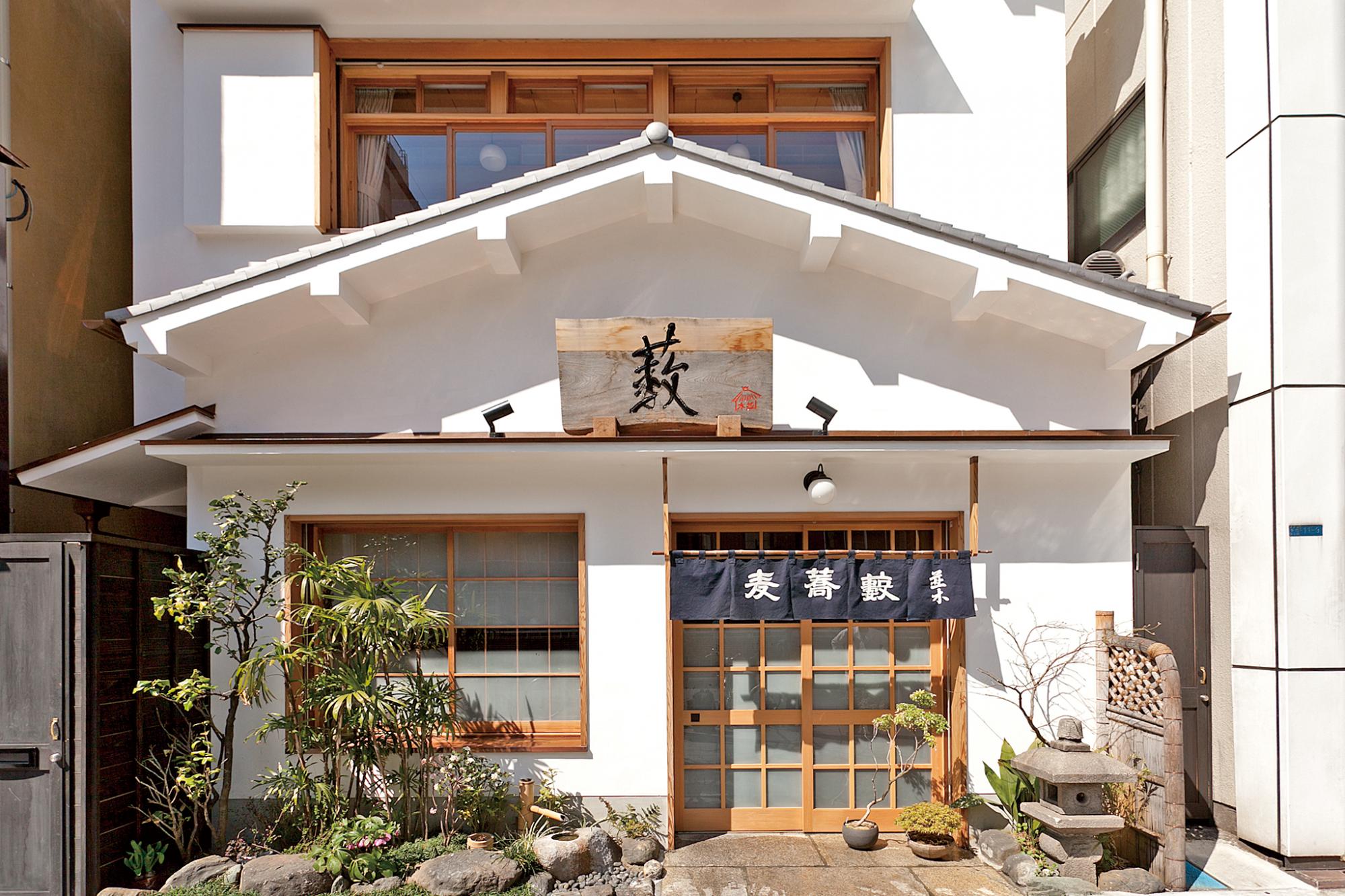 The appearance of Namiki Yabusoba

Namiki Yabusoba is a famous soba (buckwheat noodles) restaurant in Asakusa, Tokyo. It is located on Namiki Street near the Kaminarimon Gate of Sensoji Temple. It is an old restaurant that was established in 1913 and is one of the "big three" restaurants of Yabusoba*. A relatively thick dipping sauce that has been handed down for generations as well as the “Iki” (tasteful Edo (present-day Tokyo) style) of the restaurant are arguably its best features. I highly recommend this restaurant because it is conveniently located in Asakusa, a major sightseeing spot, and is also a representative soba restaurant in Tokyo. Fortunately I had a chance to interview Mr. Koji HOTTA, the master of the restaurant, so I would like to tell you more about Namiki Yabusoba through the conversation I had with the master. 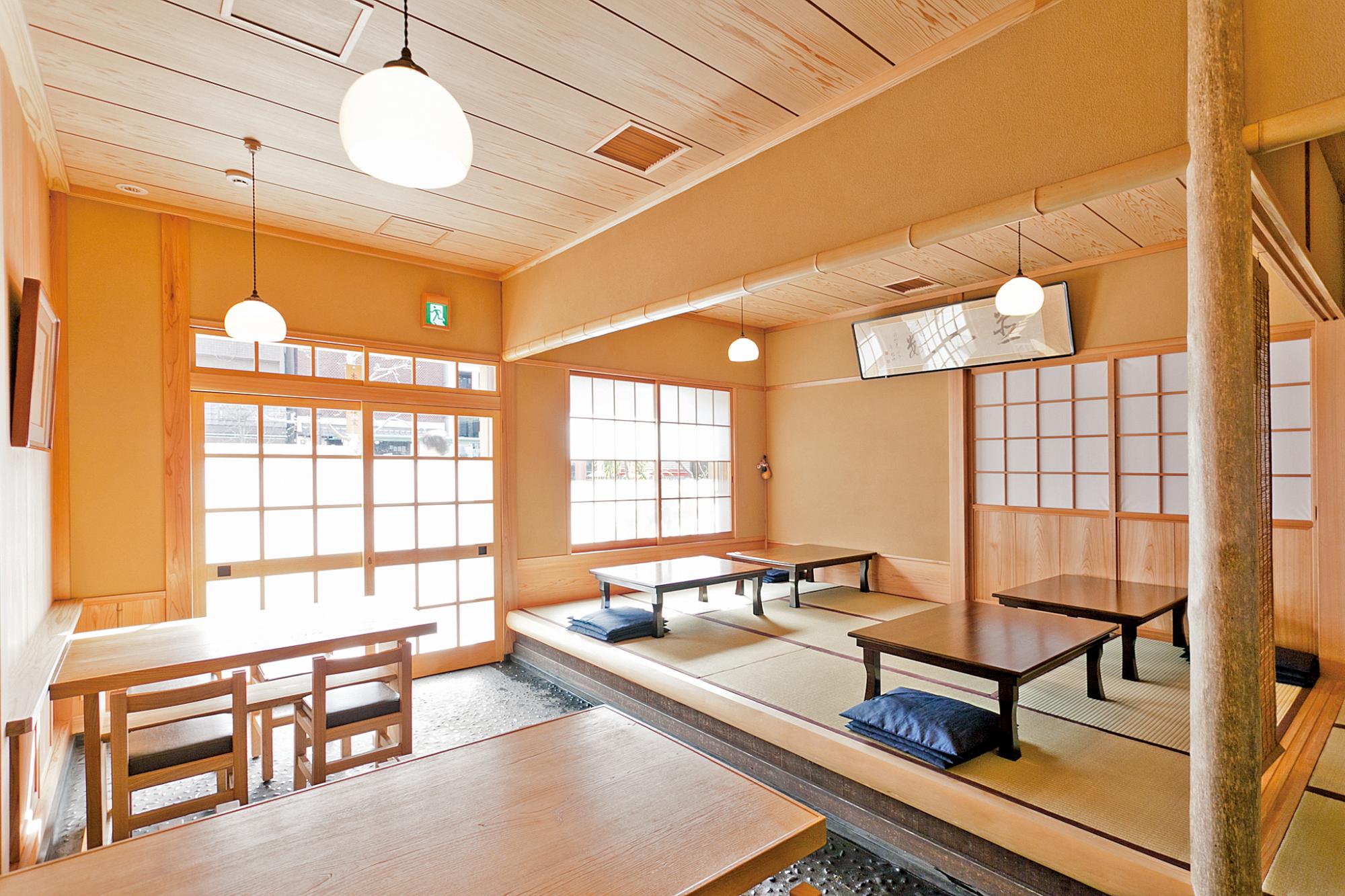 The inside of Namiki Yabusoba 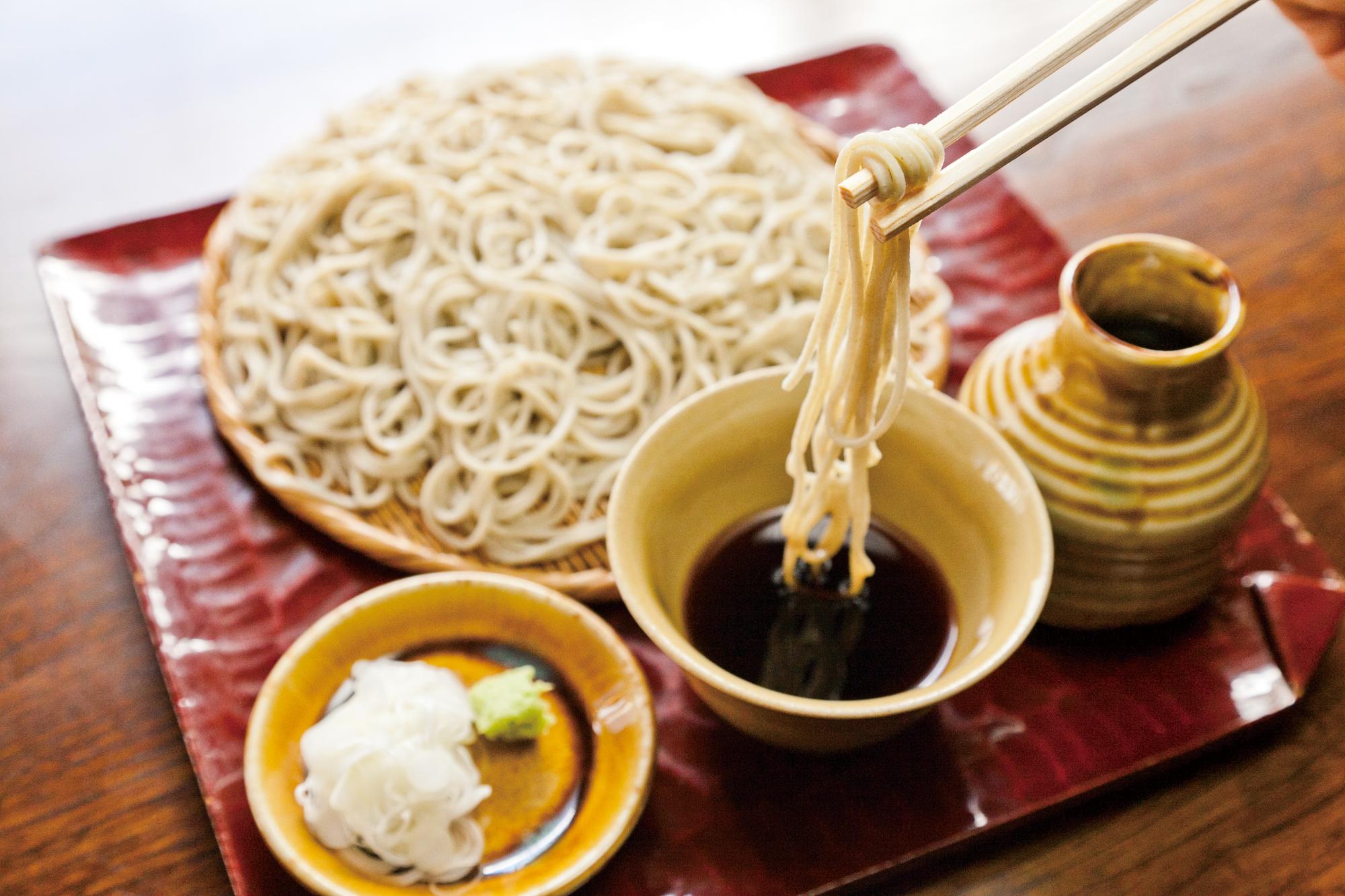 The greatest feature of Namiki Yabusoba is most likely its dipping sauce.

The noodles are hand-made Juwari soba (noodles made from 100% buckwheat flour). The restaurant uses fresh buckwheat flour that was milled earlier in the same day and it gives the noodles a rather moderate texture. Though the buckwheat seeds produced in Ibaraki prefecture are usually used, those produced in Hokkaido prefecture are used during autumn. The master said, “We choose the most excellent flavor and fragrant buckwheat seeds according to the season."
The greatest feature of Namiki Yabusoba is most likely its dipping sauce. It is a flavorful and relatively thick sauce, which has been handed down through generations. The soup stock of the dipping sauce is thick and the dipping sauce contains a high proportion of Kaeshi (mixture of soy sauce and sugar matured thoroughly). First, top-quality dried bonito is immersed in 7 sho (sho is unit of volume in Japan, approximately 1.8 litres) of hot water and boiled down for 90 minutes until it is reduced to 3 sho. 2.4 sho of Kaeshi is then added and heated in a water-bath and after that it is matured. The process lasts about 3 days from start to finish and takes a lot of time and effort.
Because of the thick dipping sauce, the general way of eating Yabusoba is to dip only the tip of soba in the sauce. For that reason, there is a Rakugo (Japanese comic story telling) story of a person living in Edo who died saying “I wanted to eat soba dipped in lots of sauce before my death”. However, there is no rule concerning how you must eat Yabusoba and the master also said, “Please eat my soba as you like”. Adjust the degree of dipping to your own preference.
In addition, an unusual quality of the Zarusoba (soba served on a bamboo draining basket with dipping sauce) served at Namiki Yabusoba is its overturned basket. This is the restaurant’s tradition and the master said, “We want customers to enjoy soba to the very last bit. The overturned basket also allows the noodles to not be so watery".

The main items on the menu are all soba, but the restaurant also serves alcohols and side dishes.
Soba can be classified broadly into cold Zarusoba and hot Kakesoba. The names of each soba change depending on their toppings such as tempura, seaweed, eggs and duck meat. (Detailed information is can be found on the restaurant menu). Zarusoba is cold soba served on a bamboo-draining basket with a cold dipping sauce. You eat Zarusoba by dipping soba in the sauce. Kakesoba is soba in hot broth. The Zarusoba at Namiki Yabusoba is served with no seaweed on top, which is different from ordinary Zarusoba. Please note that Zarusoba with seaweed on top is called "Norikake" in the restaurant. Sobayu (hot water in which soba noodles have been boiled) is also served with your Zarusoba or Kakesoba. After you finish eating your soba, add sobayu to the remaining dipping sauce or broth and drink it. I recommend it because it is nutritious and delicious. 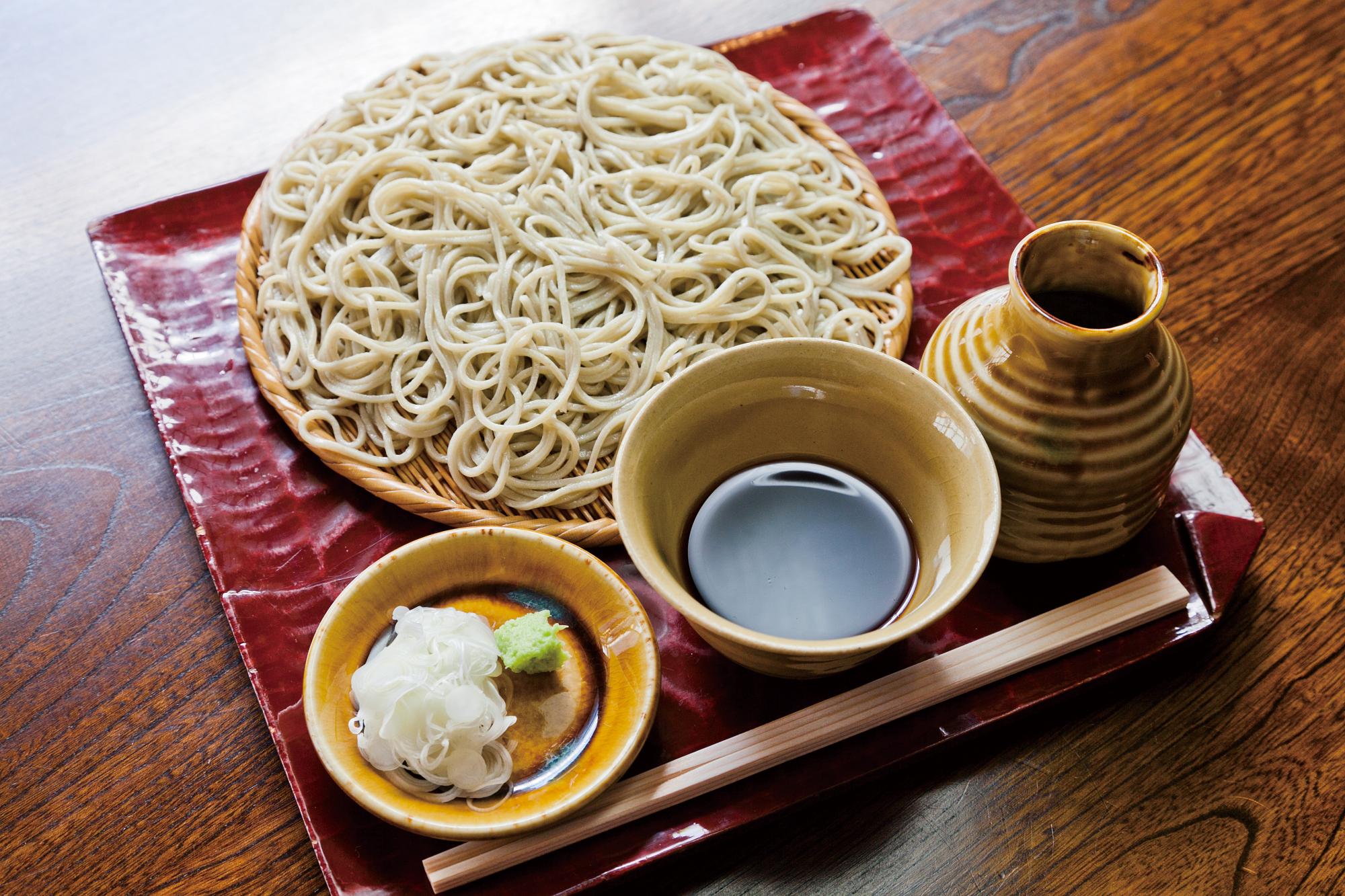 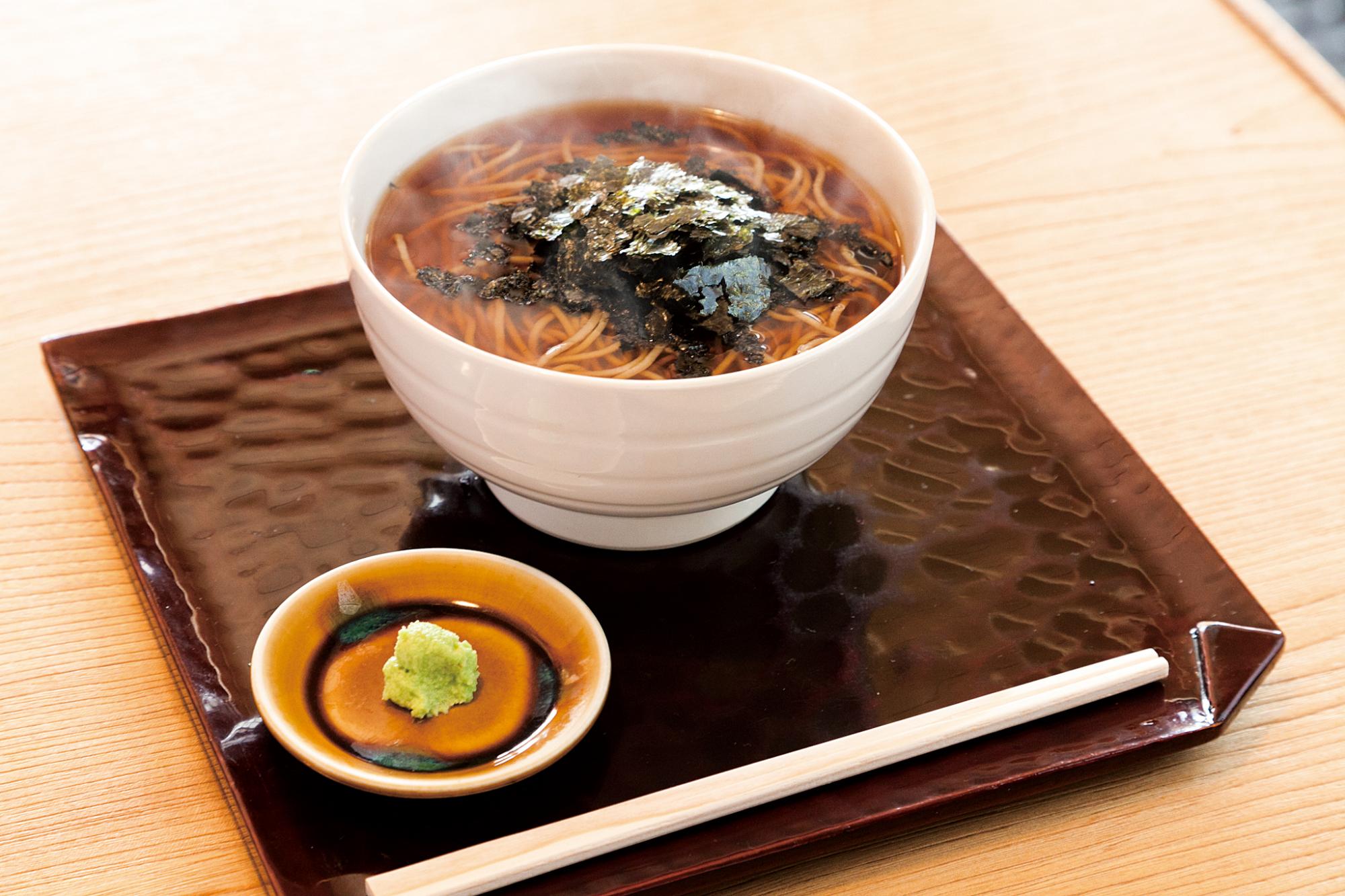 When I asked the master about what kinds of soba were popular with foreigners he said, “In the past Tenzarusoba (Zarusoba with tempura) and Tenpurasoba (Kakesoba with tempura) were popular, but now there seem to be no "favorite". However he also said, “When foreign people order Yamakake (Zarusoba with fresh grated mountain potato), they seem a bit disappointed maybe because of its stickiness”. So if you think about ordering Yamakake soba be careful.
As for alcohol, beer and sake (Japanese rice wine) are served. It has been a habit since the Edo period to drink sake before eating soba at the soba restaurant. There are also side dishes that are regularly eaten with alcohol such as, seaweed, Kamaboko (boiled fish - paste), mountain potato and tempura. Though it is typically the connoisseur's way of enjoying soba, I recommend you give it a try as well. 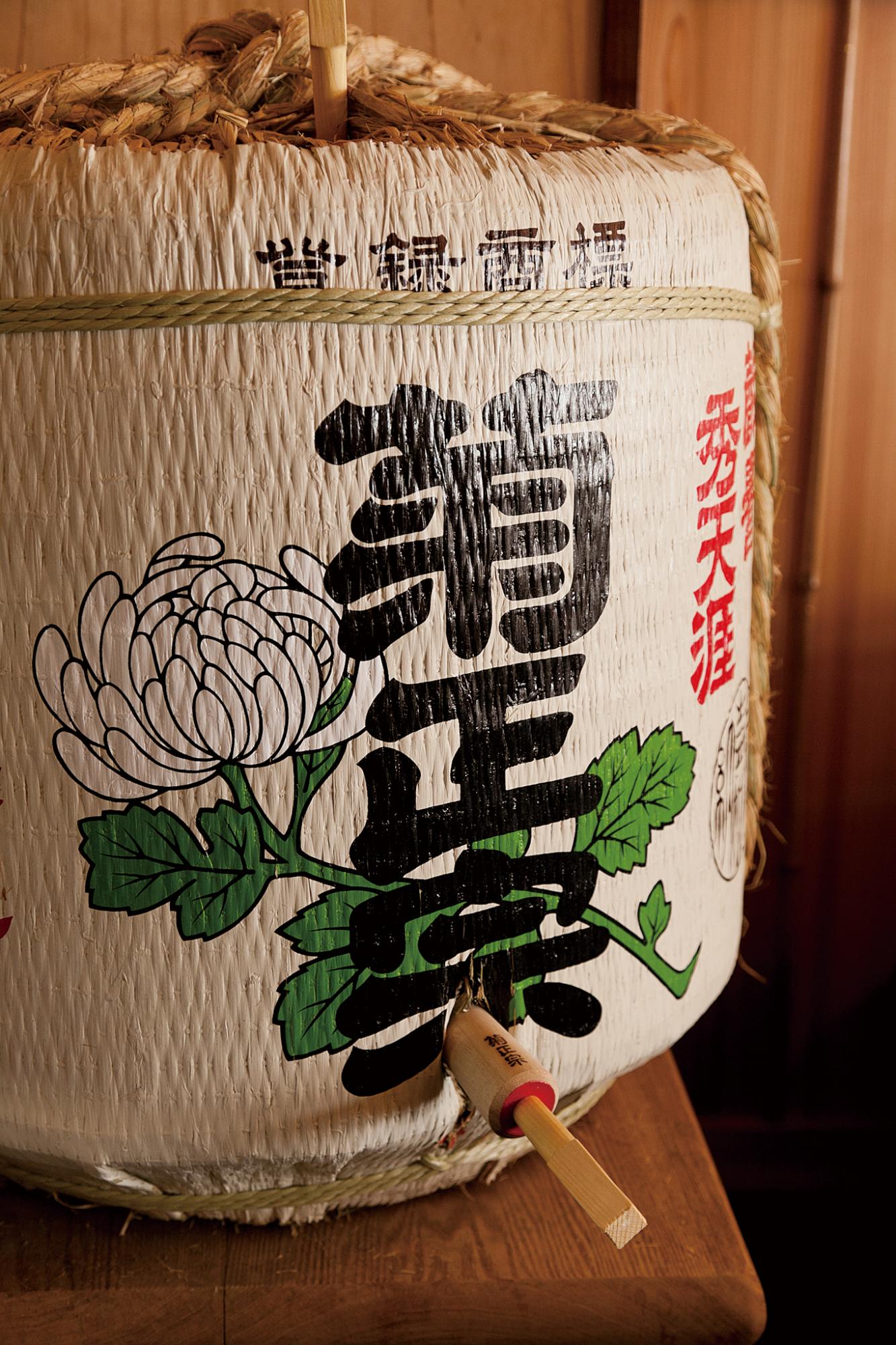 Sake in a cask 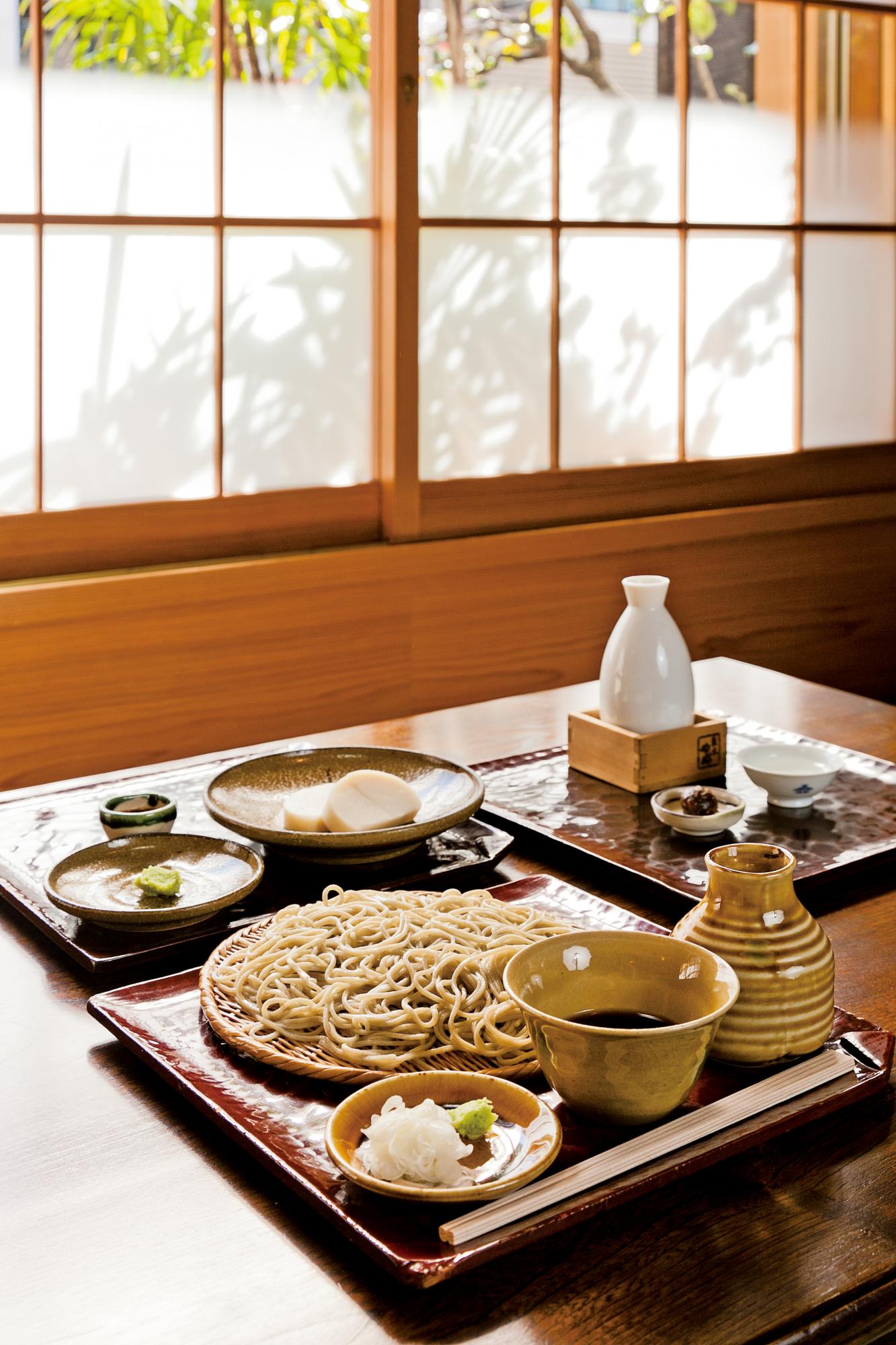 Sake, side dishes and Zarusoba

The appearance of the restaurant

In addition to the great soba, the appearance of the restaurant is also a defining feature of Namiki Yabusoba. When the building was rebuilt in 2011, it retained much of the appearance of the original building. The building exudes “Iki”, or tasteful Edo (present-day Tokyo) style. The white plastered exterior walls are very impressive. The inside is simple, yet tasteful. There are tables and seats on an earthen floor on the right side of the restaurant, and tatami mats on a raised zashiki (formal Japanese-style room) on the left side. You can keep your shoes on the earthen floor section but if you enter the zashiki, please take off your shoes. (When you leave the zashiki to go to the bathroom, etc., please wear the slippers provided).

Lastly, a note of caution from the master. “There are many foreigners who bump their head on the lintel at the entrance, so please be careful when you enter into the restaurant."

- An English menu is provided.
-> However there are no English-speaking staffs.
- Forks can be provided for your convenience. If you can’t use chopsticks well, please ask for a fork.
- The restaurant is relatively empty from 16:00 to 17:00. 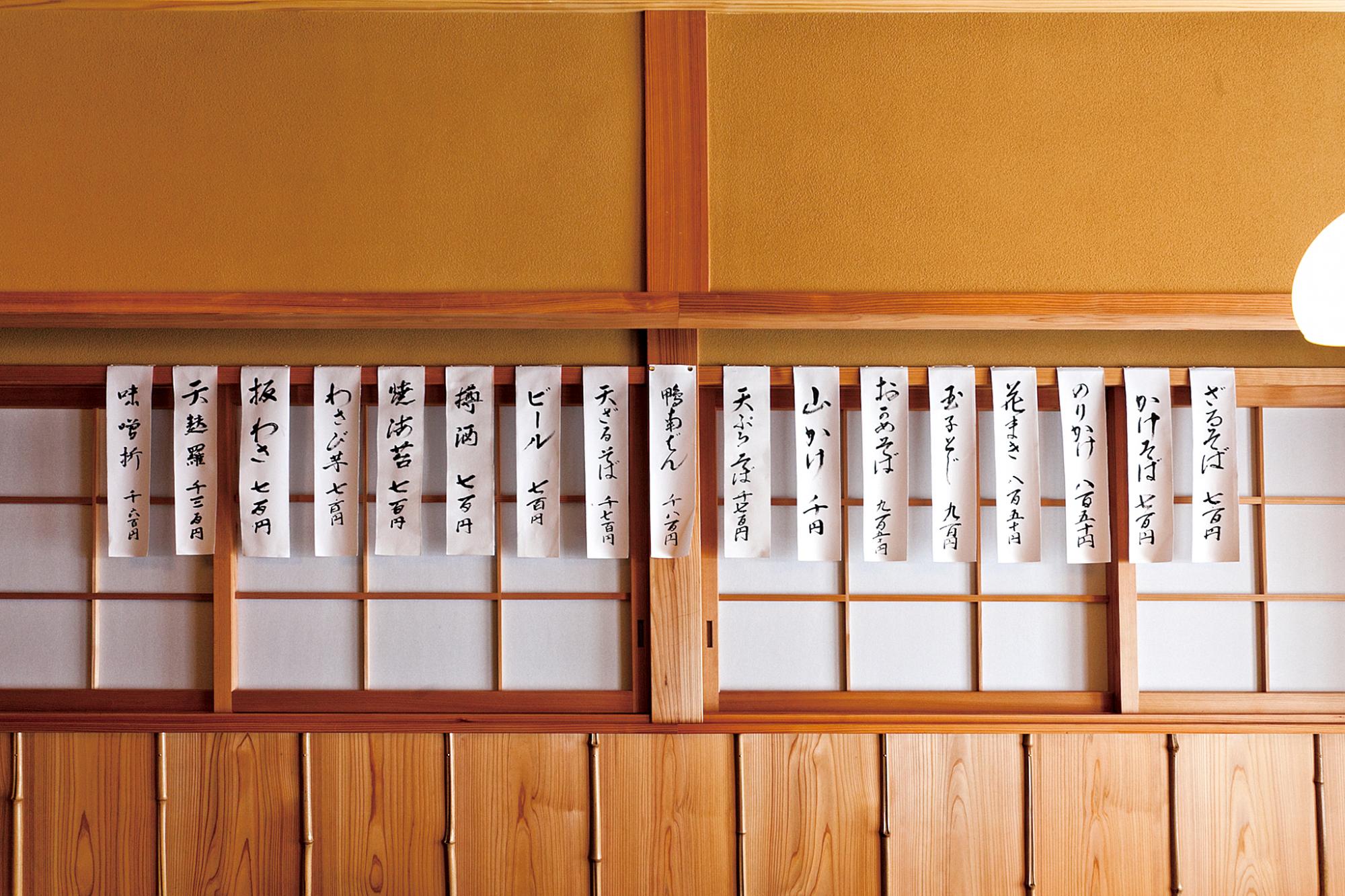 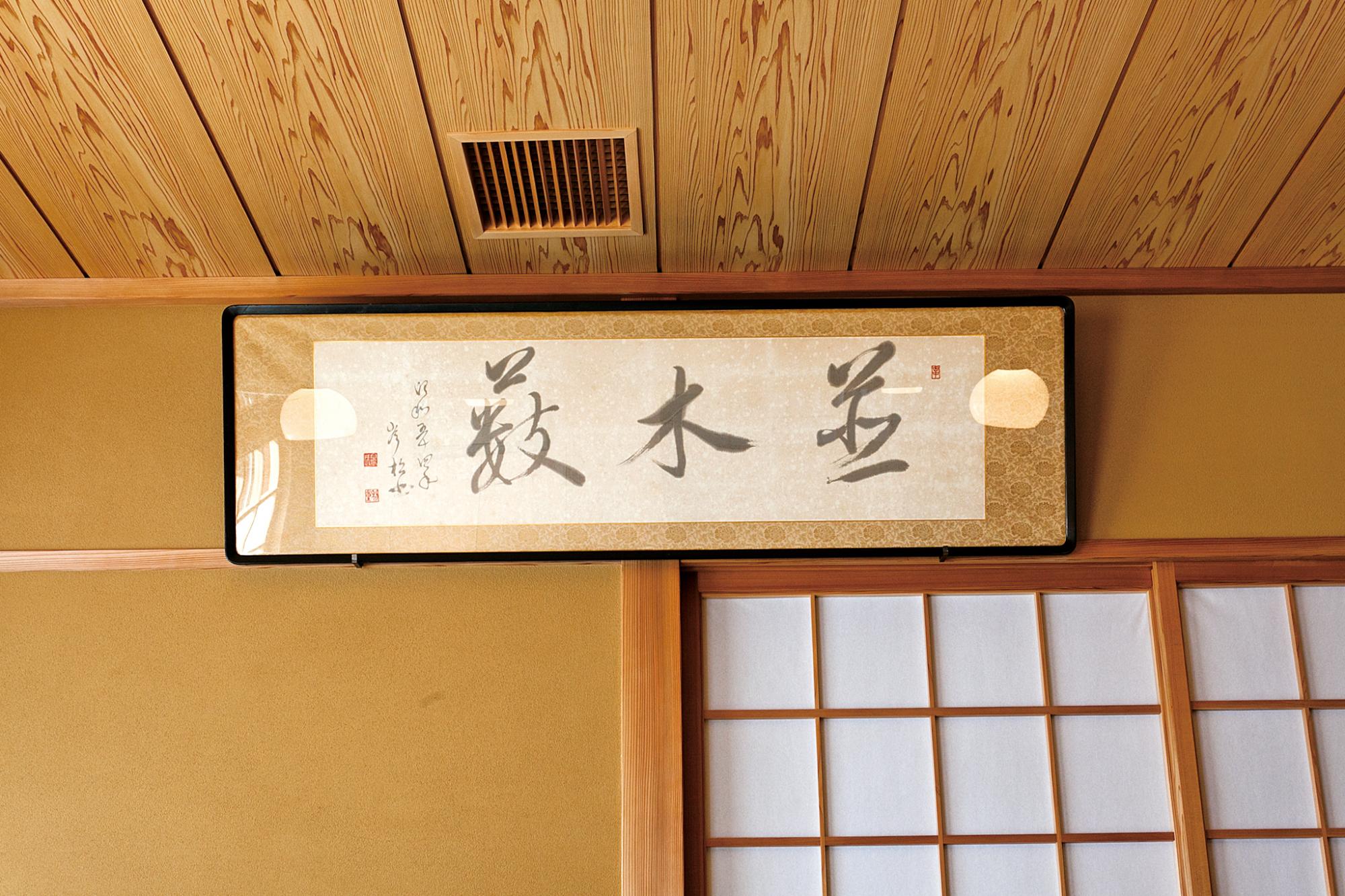 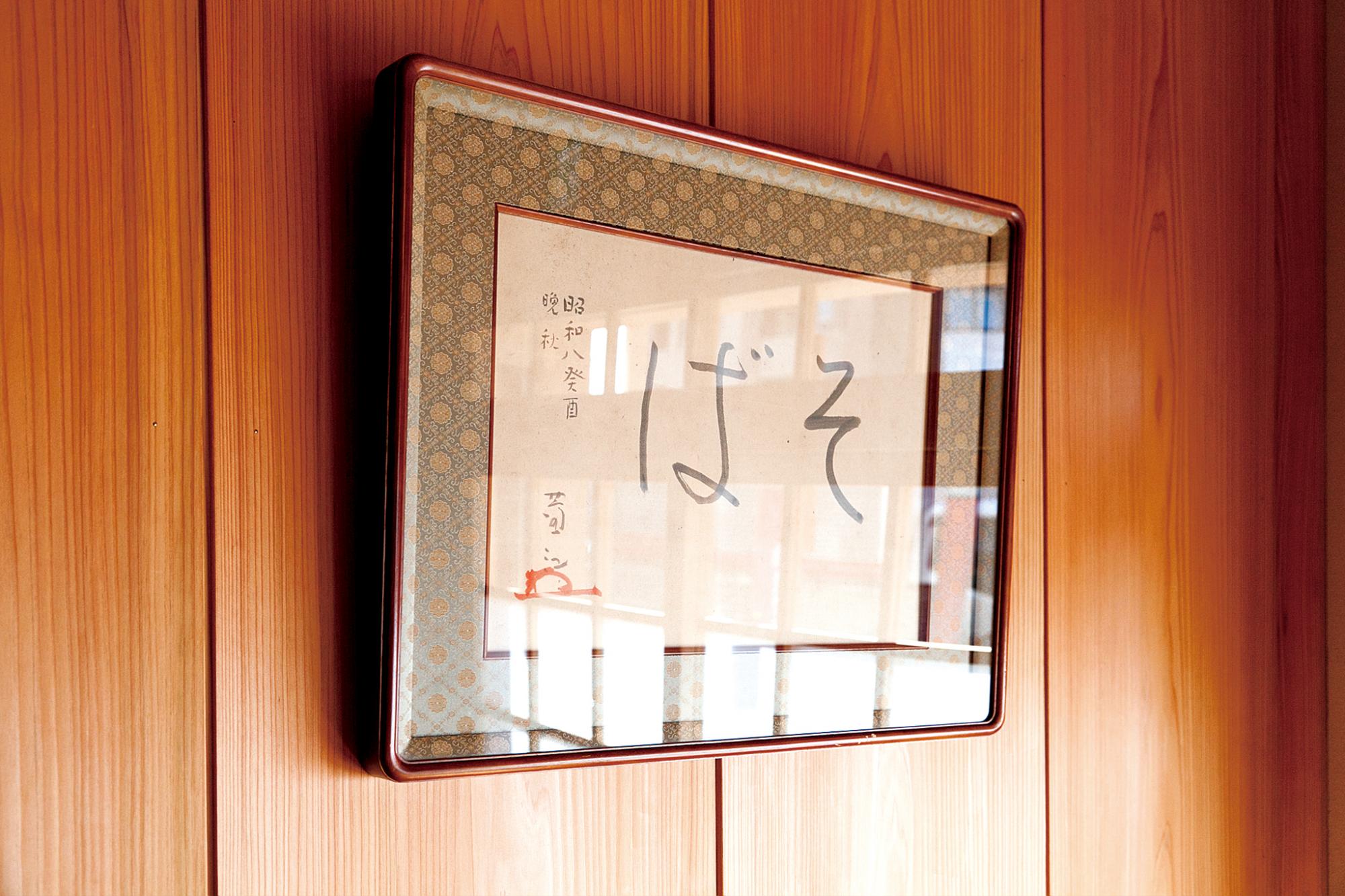 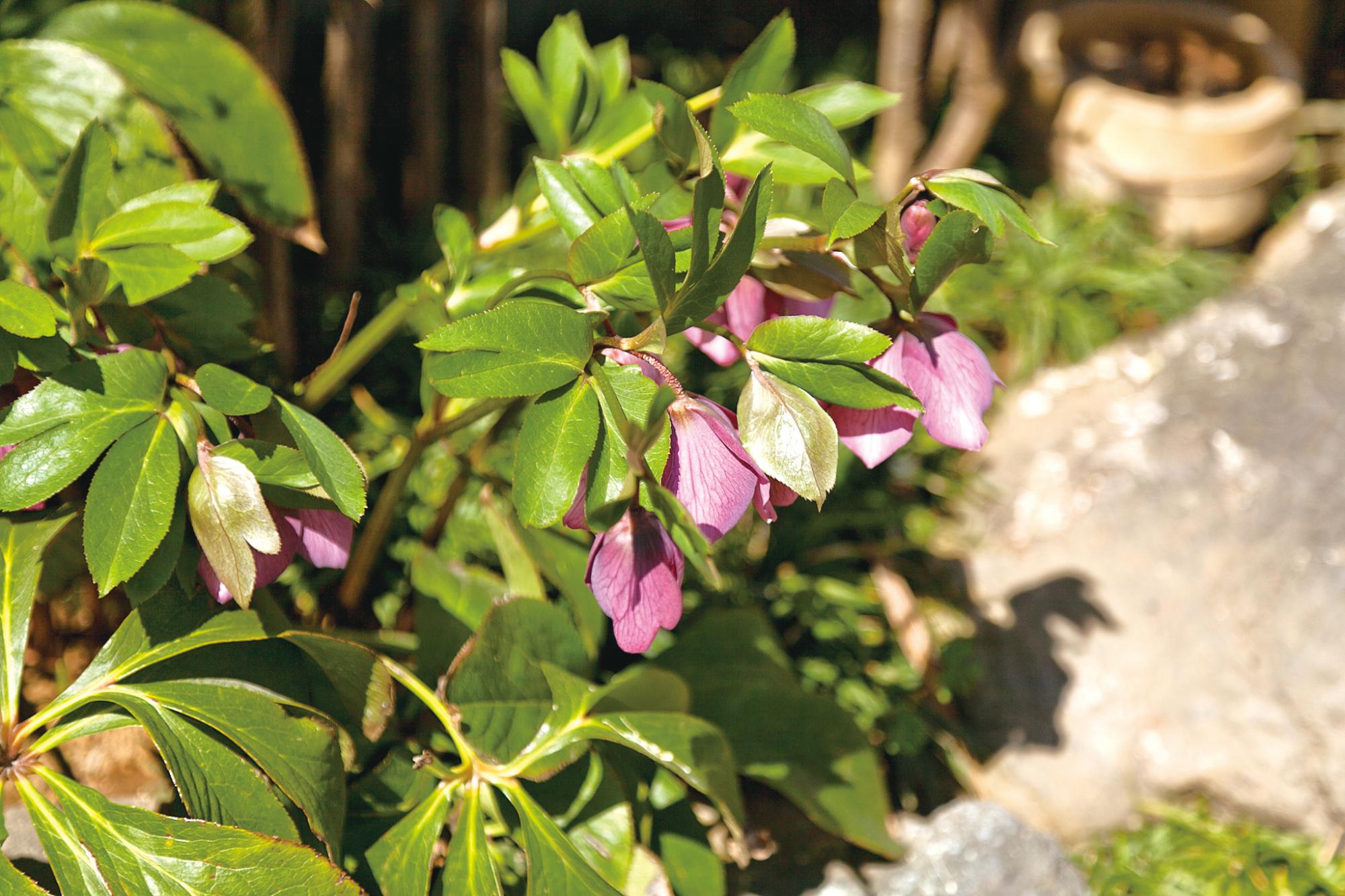 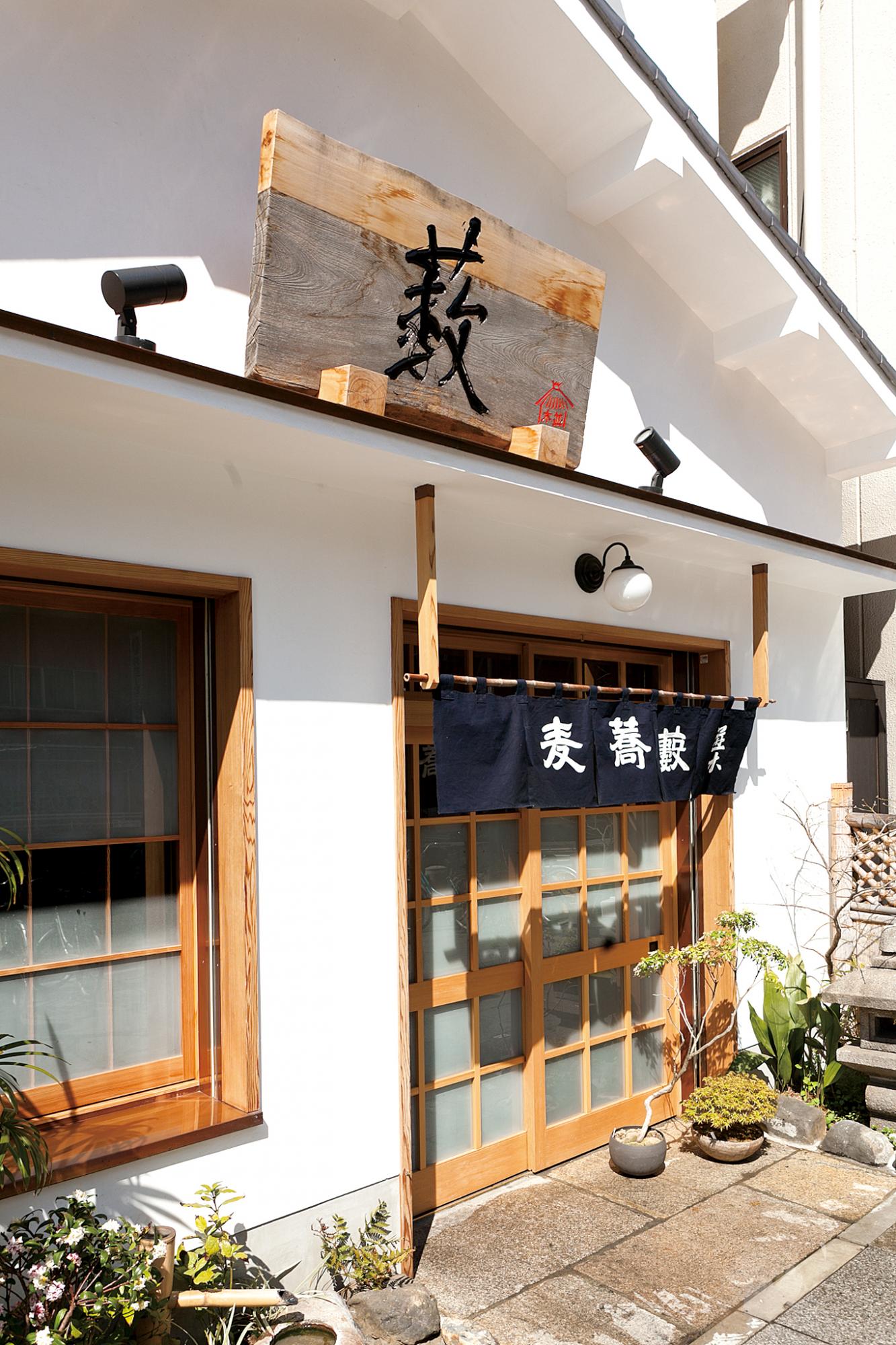 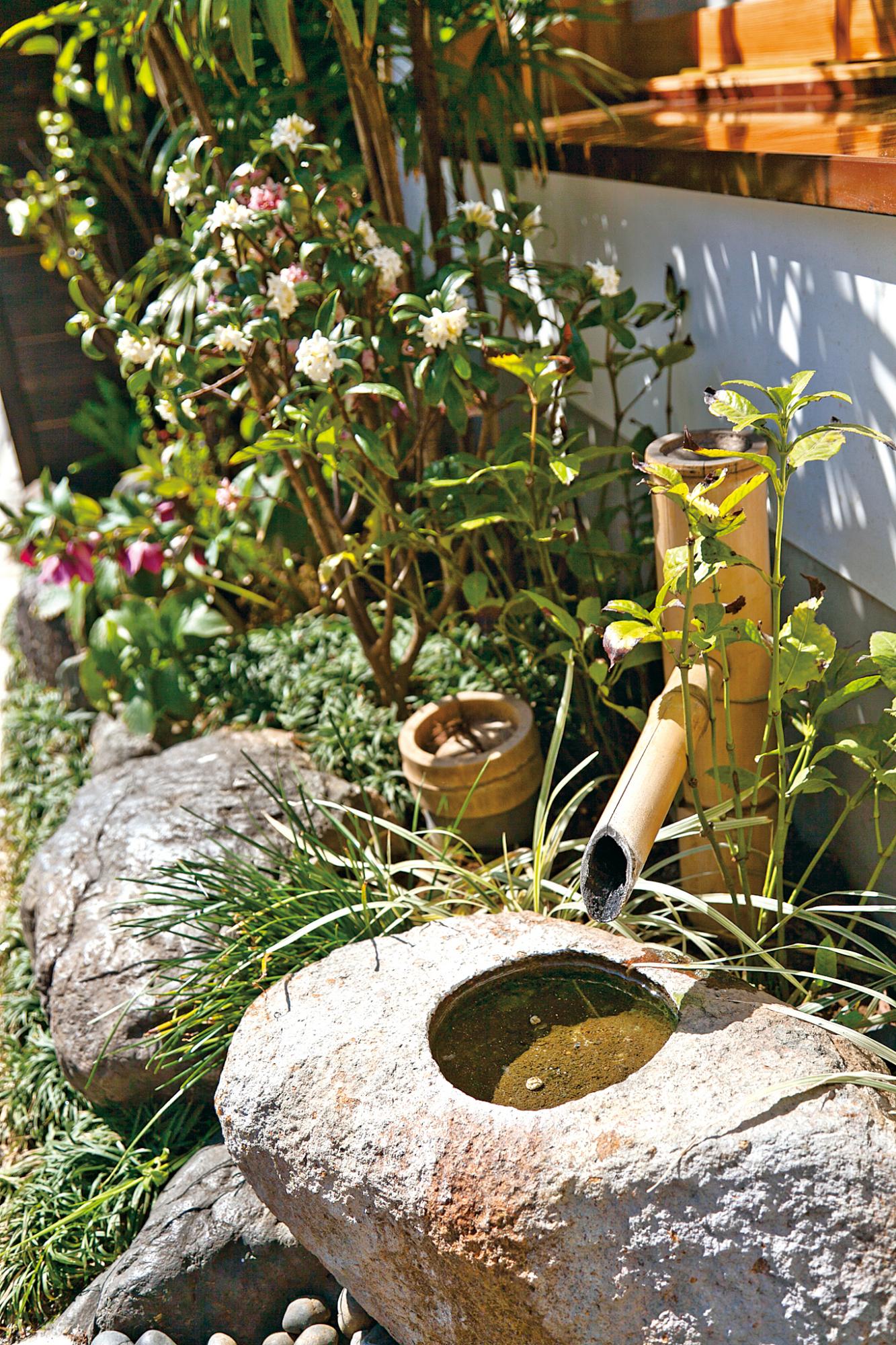