Tsukiji: a town of delicious foods 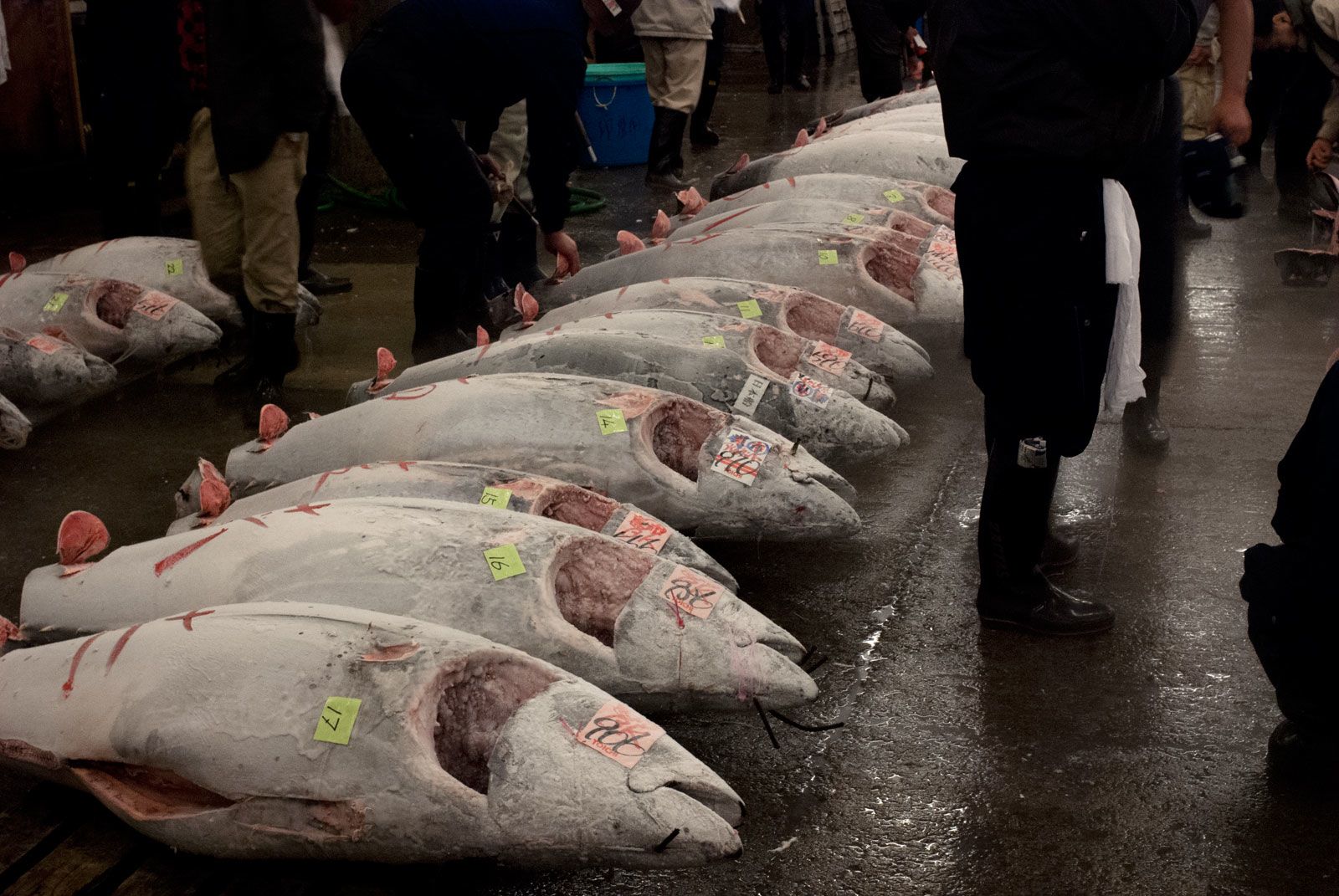 Tsukiji is an area that has Tsukiji Market, one of the biggest wholesale markets in the world. The fish market is famous in particular and attracts attention as a sightseeing spot. Tsukiji Market is a market targeting traders but there is a shopping street targeting general consumers and tourists called Tsukiji Outer Market out of Tsukiji Market. In addition Namiyoke Inari Shrine, Tsukiji Honganji Temple, Kachidoki Bridge and Sumida River Terrace are the main attractions. It is also known that there are many ryotei (traditional Japanese restaurants) in Tsukiji as well as Shinbashi and Ginza nearby. By the way though Tsukiji Marcket will be moved to Toyosu until the spring of 2016, Tsukiji Outer Market will remain there and continue to do business for restaurants nearby and general consumers.

Tsukiji means reclaimed land in Japanese and it had been under the sea until the beginning od the Edo period (1603 - 1868). It was reclaimed and became a residential area of samurai in reconstruction following the Great Fire of Meireki in 1657. At this time Honganji Temple was moved from Asakusa. Current location of Tsukiji Outer Market was the grounds of the temple and there were 58 branch temples. The grounds were developed by fishermen of Tsukudajima who were the followers. In 1664 fish wholesalers of the riverside fish market in Nihonbashi made a townsmen district in the seaside from the temple. After that many fish dealers lived there and a fish market was developed at the end of the Edo period. In 1792 Sadanobu MATSUDAIRA made an outstanding Japanese garden called Yokuonen at the site where Tsukiji Market is currently located, but today it hardly retain the atmosphere of those years.
After the arrival of the Black Ships (the fleet of United States Navy ships, led by Matthew PERRY) in 1853, the need for the coast defense rose and the Edo Bakufu (Shogunate government) established the Navy Training Center. In the Meiji period (1868 - 1912), Tsukiji became the birthplace of the Imperial Navy of Japan; the Navy Department was established at the former site of Yokuonen and after that relevant organizations were also established nearby. However these organizations were moved, or abolished after the World War and Navy facilities does not remain in Tsukij today. Futhermore a foreign settlement was established in Tsukiji Teppozu in the late 19th century and churches and mission schools were built. Mission schools in Tokyo such as Aoyama Gakuin School and Joshigakuin School began at Tsukiji. St.Lukes International Hospital was also established by a missionary doctor. The whole area of Tsukiji was burnt down in the Great Kanto Earthquake of 1923 and changed greatly by the reconstruction plan after the earthquake. The riverside fish market in Nihonbashi was moved to a navy reservation of Tsukiji. Also large-scale roads such as Harumi street and Shinohashi street were constructed and a land readjustment was done. Because of them, almost branch temples of Tsukiji Honganji Temple were moved and the remained site was developed as the outer market of Tsukiji Market.
Though Tsukiji Market fell into ruins during the World War , it has been developed again as kitchen of Tokyo after the war. Now it becomes the biggest wholesale markets in the world. Originally rivers such as the Tsukiji River spread throughout Tsukiji, however they were reclaimed and expressways were constructed.
Tsukiji Marcket, which becomes a center of Tsukiji will be moved to Toyosu until the spring of 2016. How to use the remained site is undecided. Tsukiji Outer Market will remain there and newly establish Tsukiji New Market (tentative name) for restaurants nearby and general consumers. Tsukiji will continue to develop as a town of a fish market. 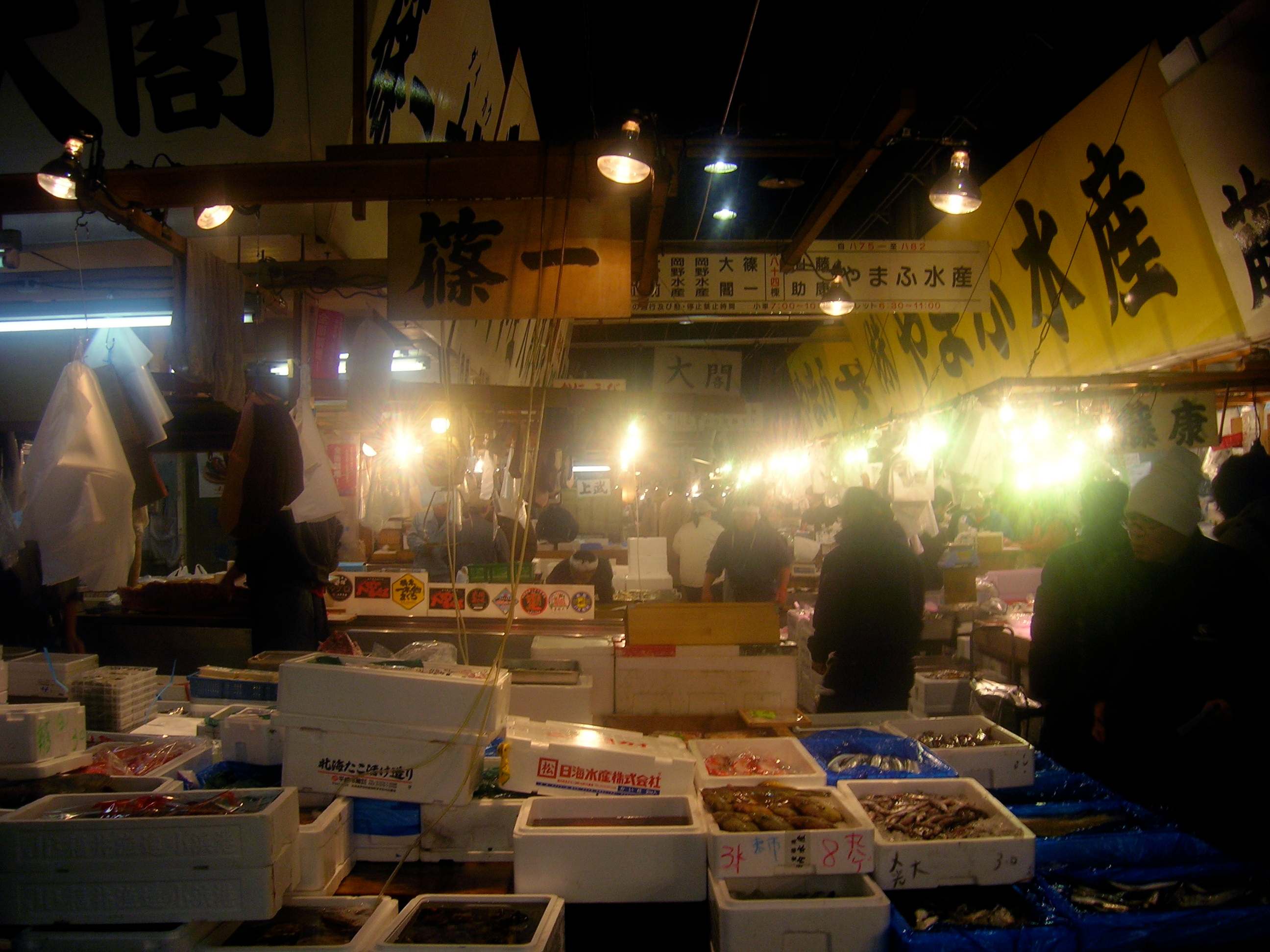 Tsukiji Market is one of the biggest wholesale markets in the world, which was opened in 1937. The site area is 230,000 square meters. It deals with marine products and fruit and vegetables mainly. The main attraction is the tuna auction site but today the first 120 arrivals can take a look at the site (the receiving applications starts from 5 am) because too much visitors disturbed the business. Everyone can take a look at marine products intermediate wholesalers’ shops from 9 pm where you can taste of the atmosphere of Tsukiji Market. Various marine products hit the shelves and the shops are very active. Note that the floor is waxy and the traffic of Turret Truck is heavy. Uogashi Yokohcho is also famous where you can enjoy delicious dishes using fresh ingredients purchased from Tsukiji Market. By the way actually the first store of Yoshinoya, a major gyudon (a bowl of boiled rice covered with cooked beef and vegetables) chain is located in Tsukiji Market. Take into consideration that almost shops close by the morning. The market is basically closed on Sundays and national holidays. 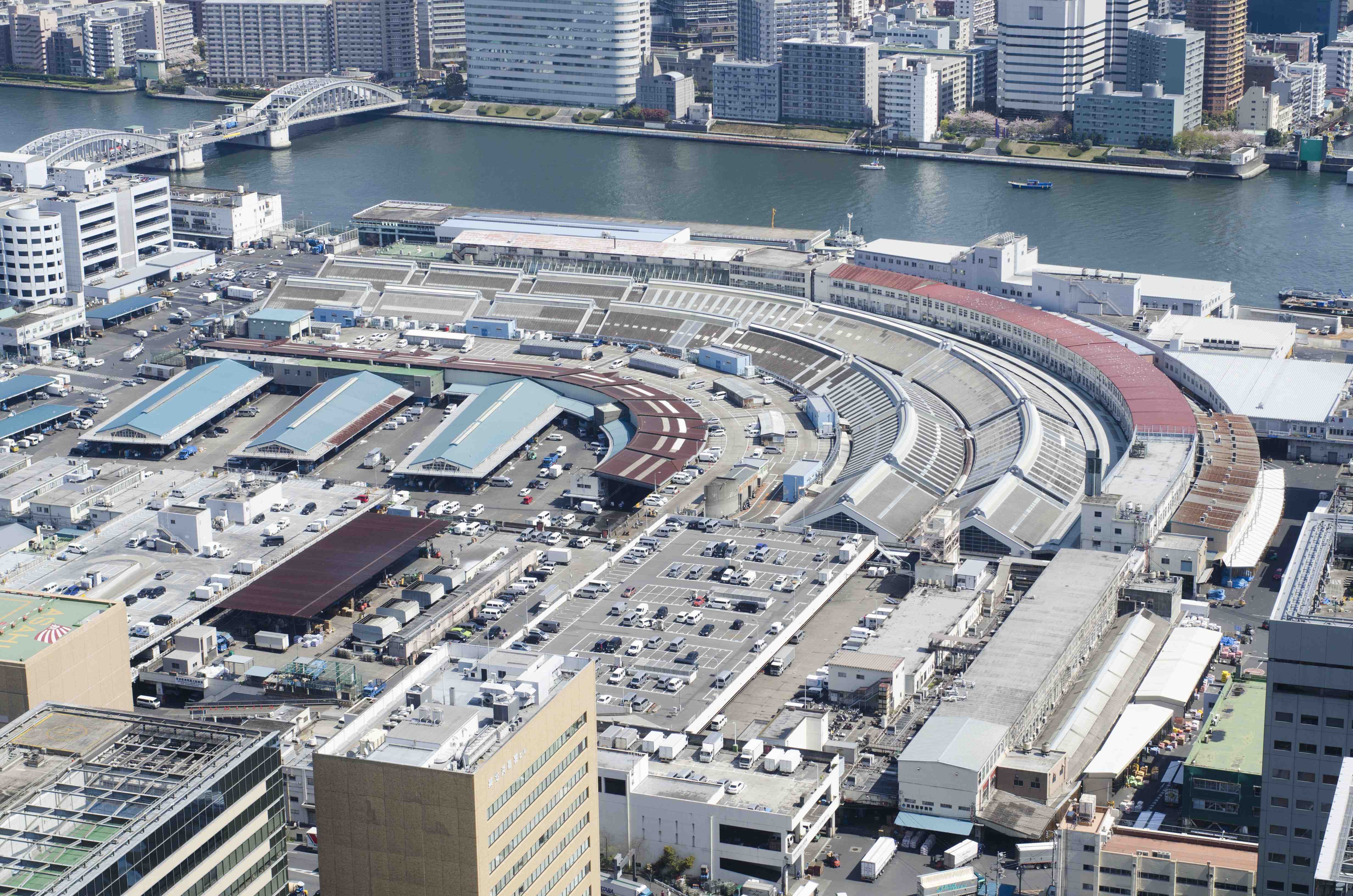 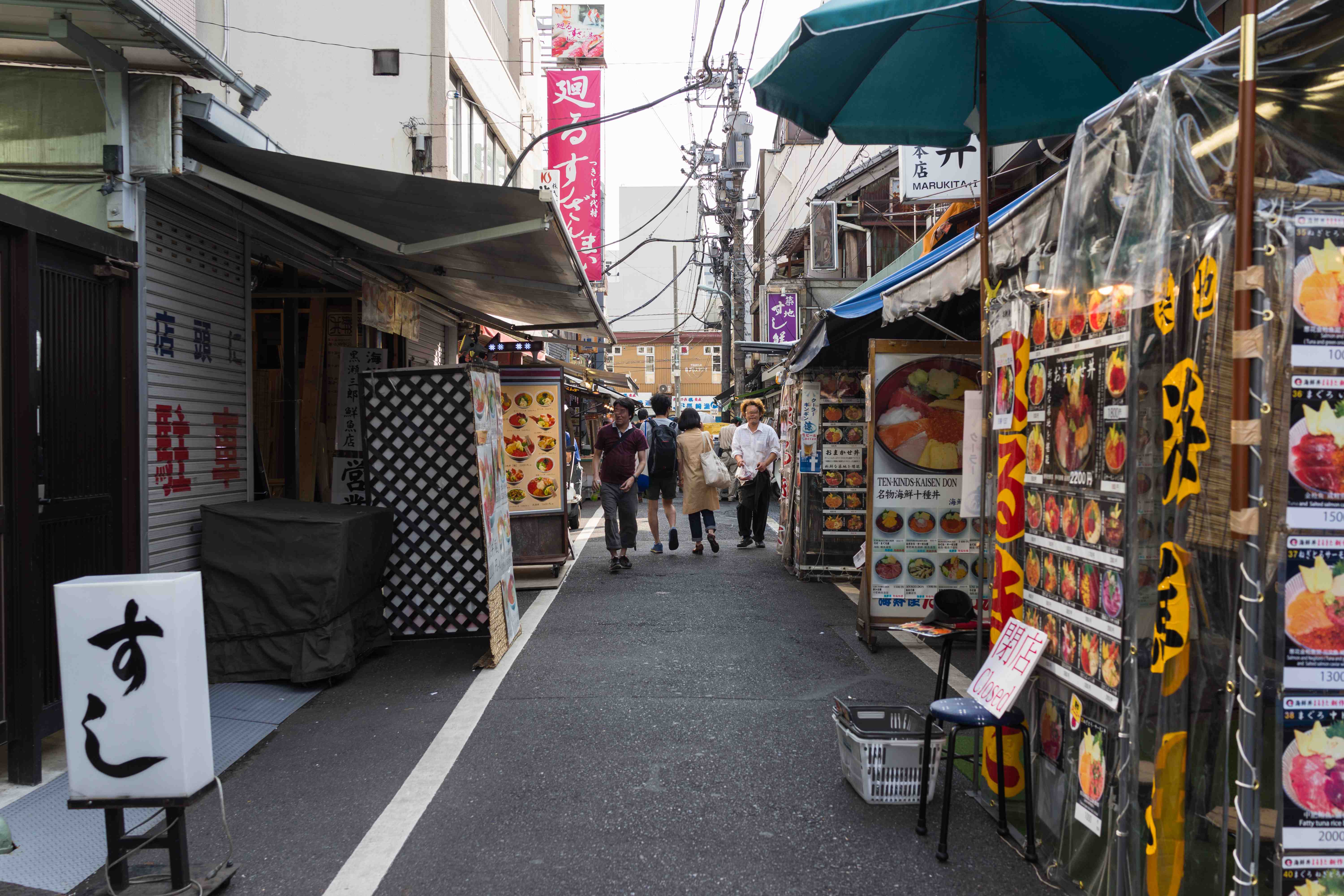 Tsukiji Outer Market is a shopping street adjacent to Tsukiji Market, which targets general consumers and tourists. You can buy marine products, fruit and vegetables, dry foods and cooking tools there. As well as Uogashi Yokocho in Tsukiji Market there are a lot of restaurants and you can enjoy exquisite dishes using fresh ingredients purchased from Tsukiji Market.
http://www.tsukiji.or.jp/english/index.html 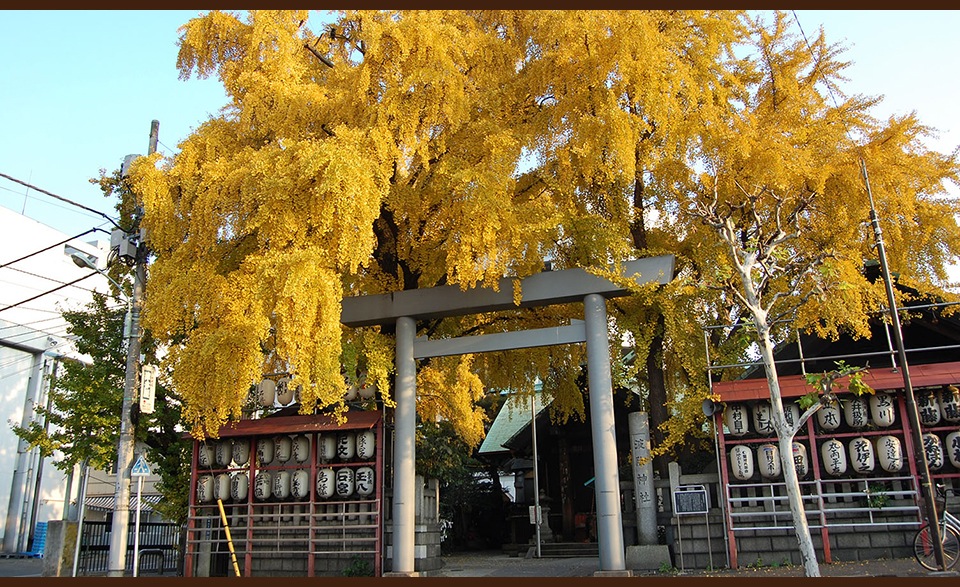 Namiyoke Inari Shrine is an Inari shrine located on the grounds of Tsukiji Market, which was established in 1659. In the beginning of the Edo period the grounds of Tsukiji Honganji Temple were developed by fishermen of Tsukudajima who were the followers, and the reclamation work was very difficult because of violent waves. One day, when people enshrined the object of Oinarisama (the god of harvest) giving a light and floating on the sea, the violent waves became calm and the work was safely completed. That is the backgrounds of Namiyoke Inari Shrine. After that the shrine is familiar to people as a shrine for Avoidance of Bad Luck. The main building was built in 1937, which is made of Japanese cypress. It is a Yuiitsu Shinmei zukuri style as well as Ise Grand Shrine. Heads of a lion, a dragon and a tiger were displayed at the main building because a lion is said to overpower a dragon and a tiger, which are said to create waves. 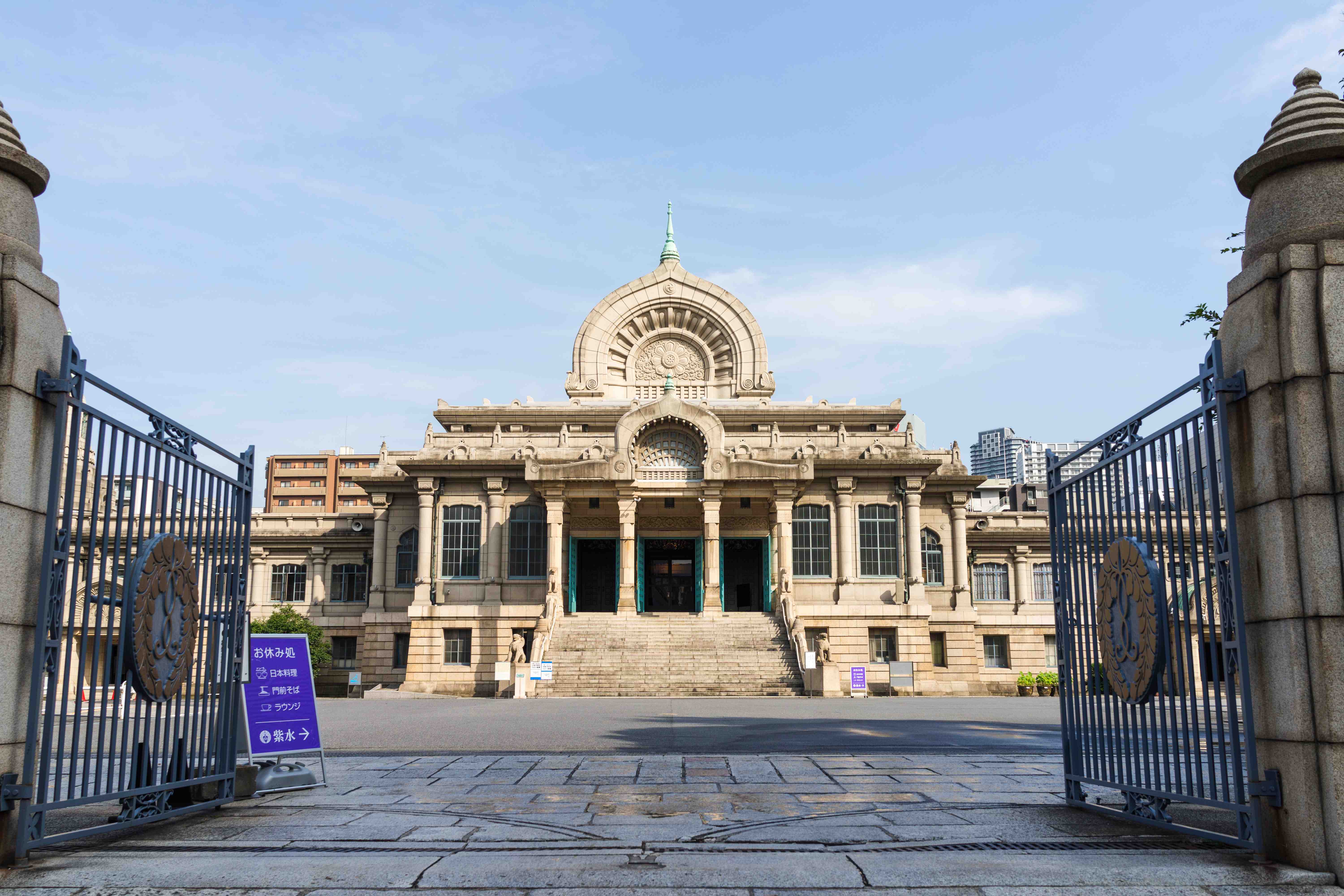 Tsukiji Honganji Temple is a temple of Honganji School of Jodo Shinshu Sect, which is directly supervised by Nishi Honganji Temple in Kyoto. It features its ancient Indian style appearance. Its principal image is Amida Nyorai (Amitabha Tathagata). It has long history and it began when it was established in Asakusa in 1617 of the Edo period. After it was burnt down by the Great Fire of Meireki in 1657, it was ordered to move to Tsukiji by the Bakufu (Shogunate government). The grounds were developed by fishermen of Tsukudajima who were the followers. The present area of Tsukiji Outer Market was also the grounds and it was a big temple having 58 branch temples. Tsukiji Honganji Temple and its branch temples were completely destroyed by the Great Kanto Earthquake in 1923. After that almost branch temples were moved by a land readjustment and the grounds area was reduced to the present area. The present main building was reconstructed in 1934, which was designed by Chuta ITO. It is an Indian style stone building and it has a splendid appearance. It is designated as a national important cultural property. 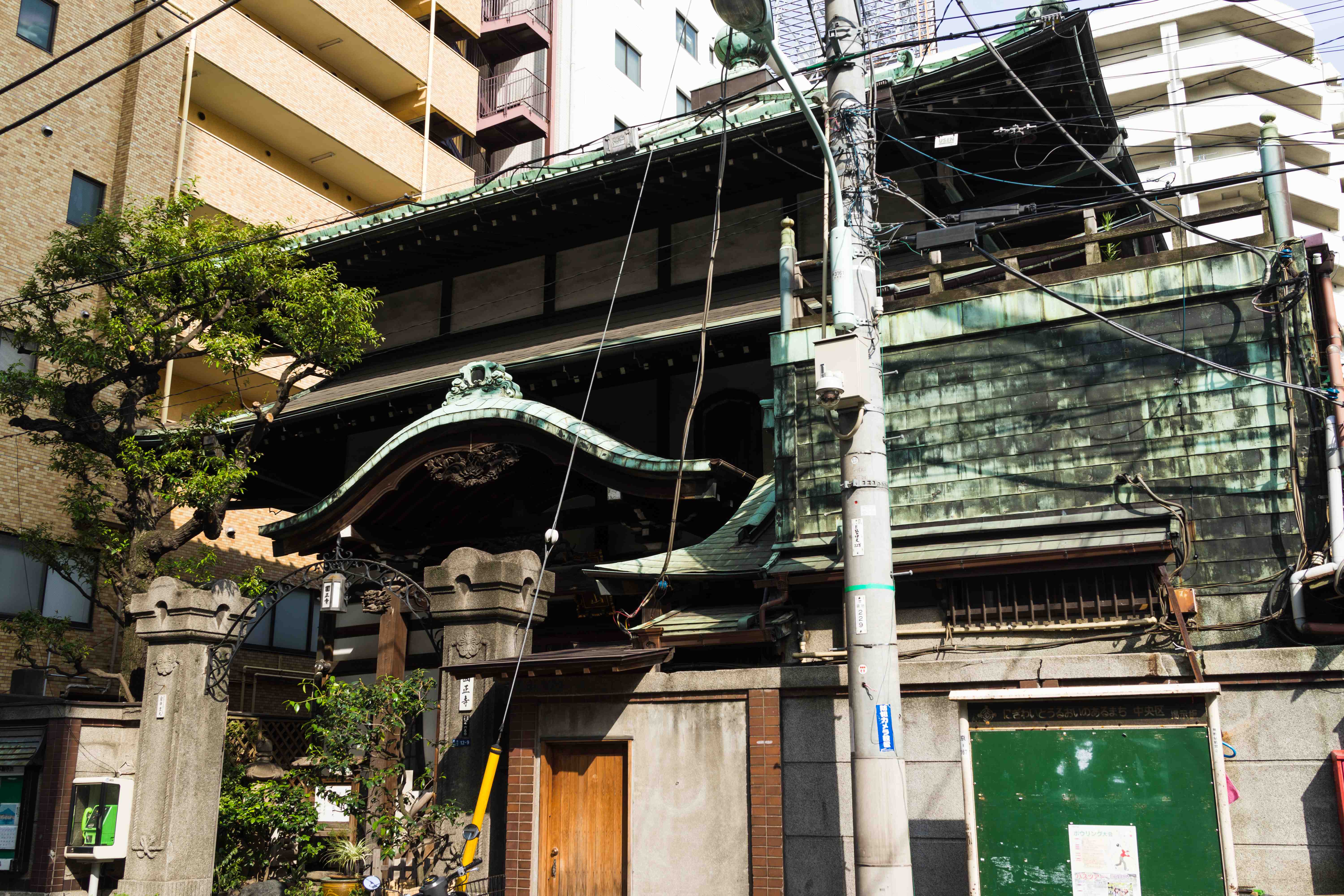 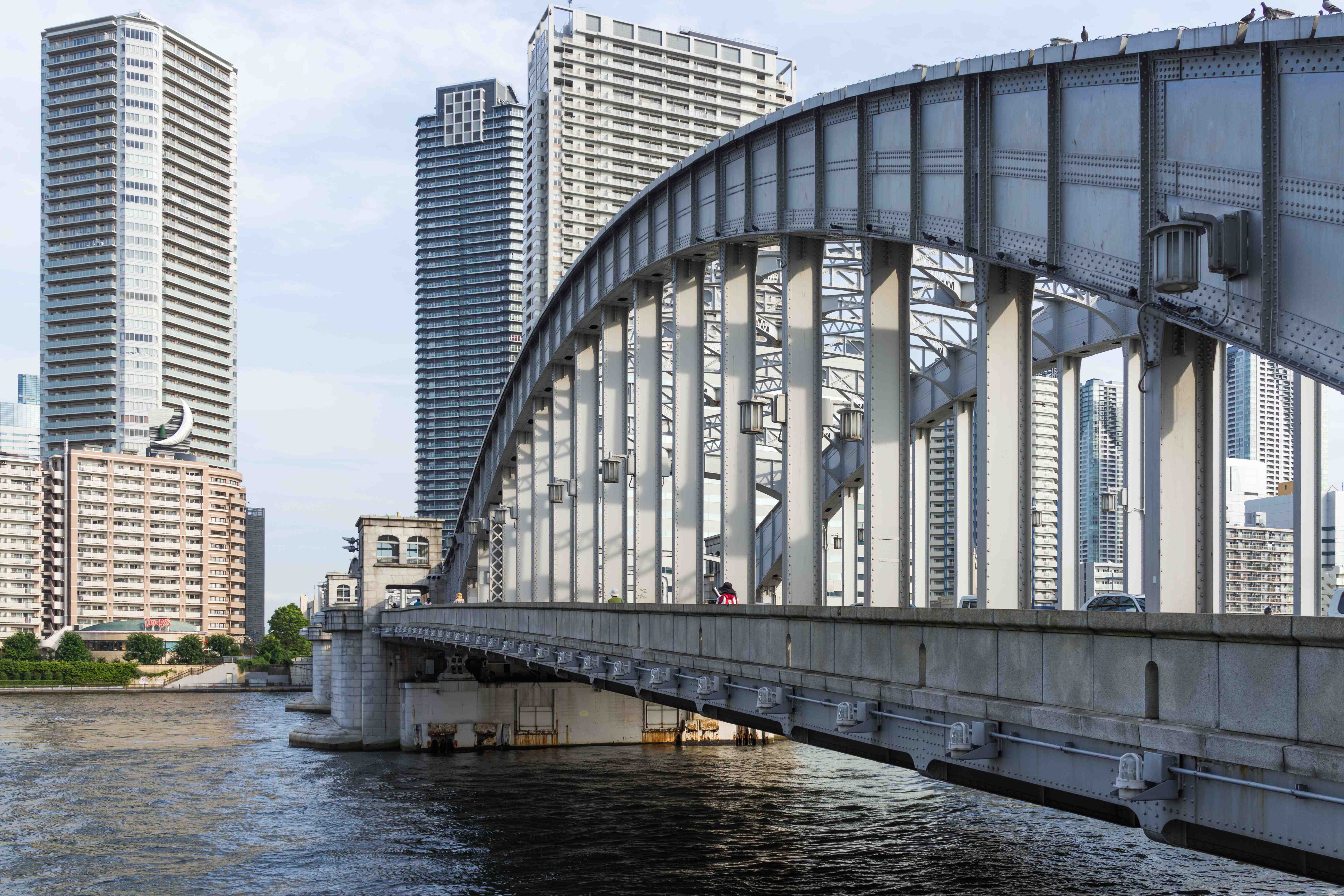 Kachidoki Bridge is a bridge over the Sumida River. It is a movable bridge and that is rare in Japan. It is located in the most downstream part among the bridges over the Sumida River. The construction started in 1933 for connecting Tsukiji with Tsukisima, which was reclaimed in 1892, and was completed in 1940. It was designed as a movable bridge because a lot of ships navigated the Sumida River in those days. When a large ship navigated the river the bridge was up but it has not been up since 1970. It is designated as a national important cultural property. 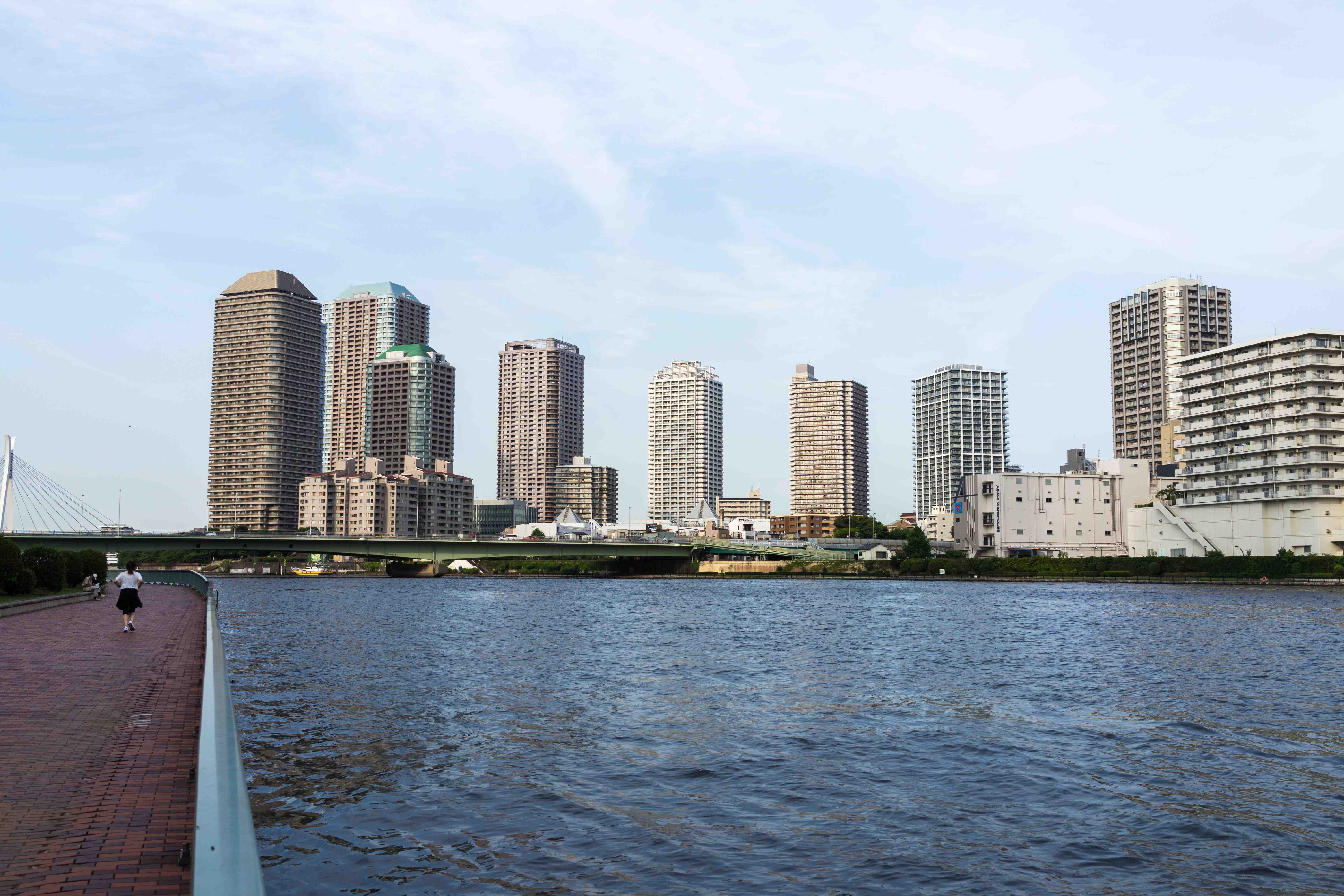 The Sumida River and high rise buildings of Tsukishima and Kachidoki 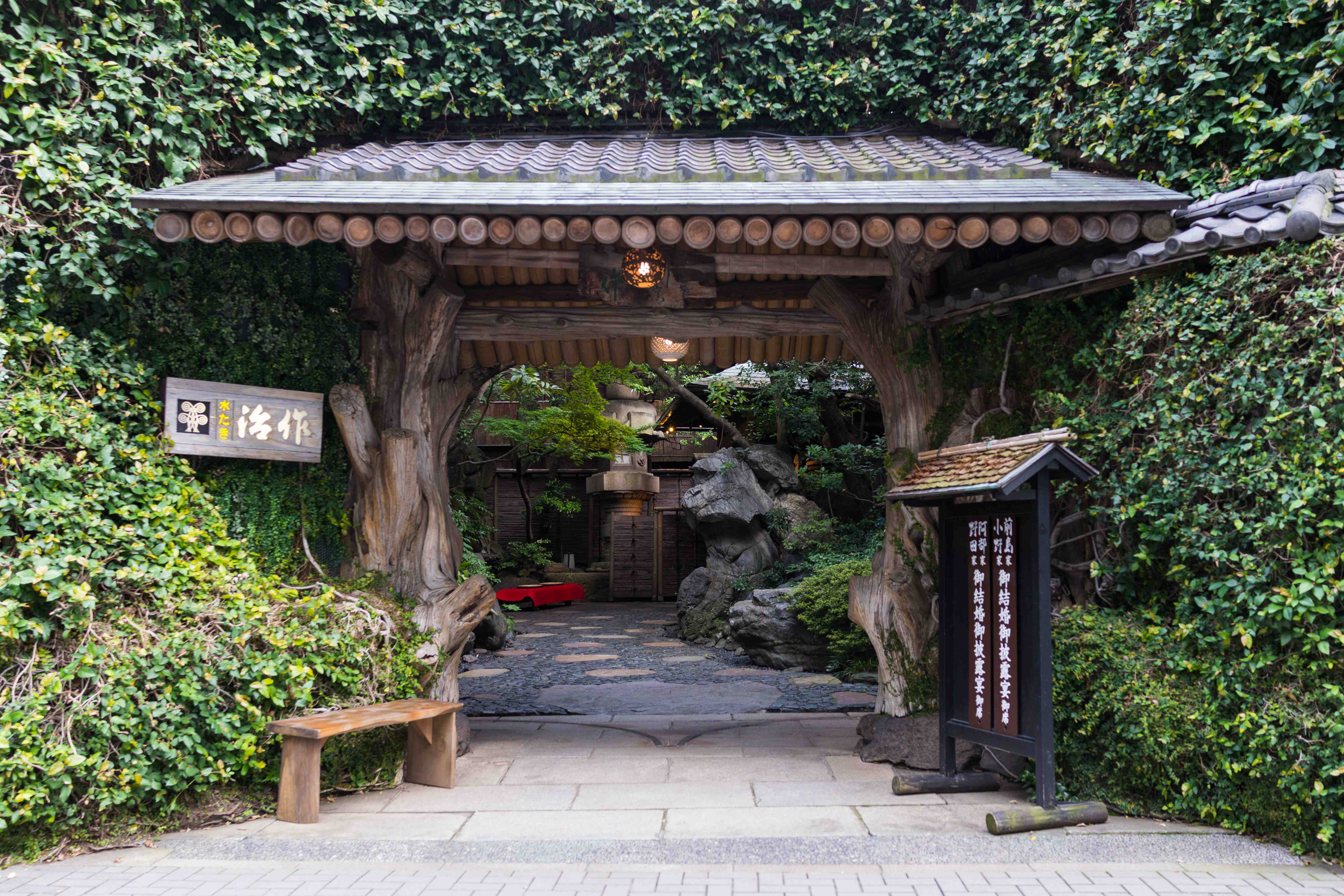 It is known that there are many ryotei (traditional Japanese restaurants) in Tsukiji as well as Shinbashi and Ginza nearby. These areas is called Shinbashi hanamachi (geisha district) and developed in the Meiji period because key government officials loved it. Though it declined after the oil crisis of the 1970s, some ryotei remain even today. In Tsukiji, Shinkiraku is famous in particular. Also there have been many ryotei along the Sumida River since the Edo period and Jisaku is opened in Tsukiji.

Though Tsukiji is famous as a town of delicious foods, it has many other attractions such as Tsukiji Honganji Temple, Kachidoki Bridge, ryotei and so on. Tsukiji is one of recommendable spots in Tokyo.