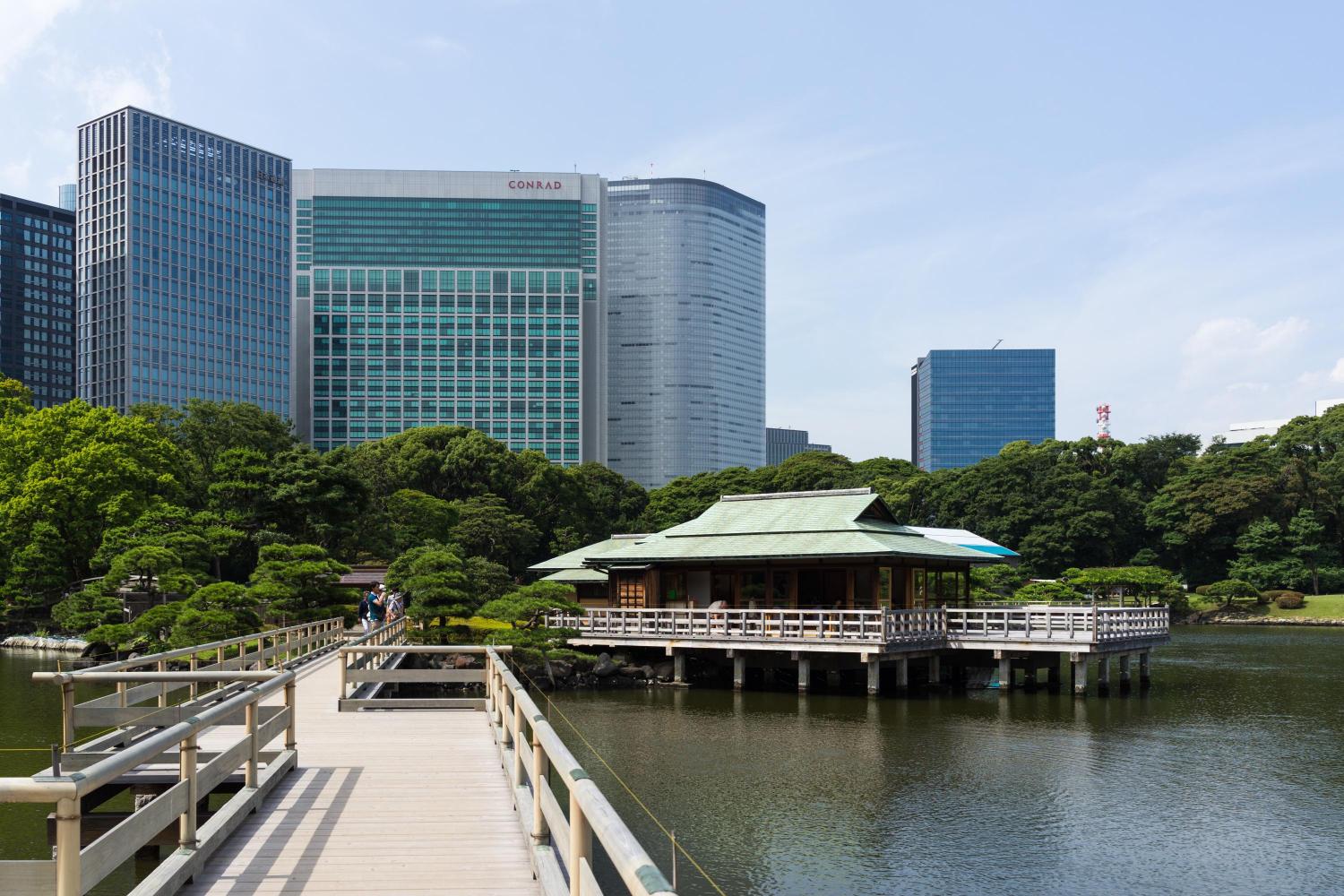 Hamarikyu Gardens is a tidal Kaiyushiki Japanese garden on Tokyo Bay. In a Kaiyushiki Japanese garden a big pond is placed at the center, walking paths are provided around the pond and you can enjoy scenery created by a bridge, a small island, tsukiyama (a small hill) and a tea house. The garden was built to take in seawater from Tokyo Bay so that people enjoy diversified scenery with the rise and fall of the tide. Hamarikyu Gardens was originally constructed as the villa of the Kofu Domain and its garden. Later it became the villa of the Tokugawa Shogun family and a branch castle of the Edo castle. It was also used as a falcon hunting ground and an educational institution of the Bakufu navy. In the Meiji period it became an Imperial villa and after the World War , it was granted to Tokyo Metropolitan government and became a Tokyo Metropolitan park. Its main attraction is Shioiri Pond with Nakajima no Ochaya Tea House. You can enjoy traditional Japanese beauty created by the pond and the Japanese architecture. By the way skyscrapers in Shiodome and the Tokyo Bay area enter into the view inside the garden, which is, for better or for worse, a common sight in contemporary Tokyo. It is also the appeal of the gardens that various flowers blooming from season to season gladden your eyes, such as plum blossoms, double cherry blossoms, canola flowers, cosmos sulphureus and so on. In addition tea houses that were burnt down in the Great Kanto Earthquake and the World War are being restored, for example, Matsu no Chaya Tea House was completed in 2010, Tsubame no Chaya Tea House will be completed in fiscal 2014 and Taka no Chaya Tea House in fiscal 2017.

Hamarikyu Gardens was originally constructed as the villa of the Kofu Domain and its garden in 1654 during the Edo period (1603 - 1868). When Ienobu TOKUGAWA who was once the lord of the Kofu Domain became the 6th Shogun (the leader of samurai) in 1709, it became the villa of the Tokugawa Shogun family and also functioned as a branch castle of the Edo castle. It was also used as a falcon hunting ground during the era of the 11th Shogun Ienari TOKUGAWA (1787 - 1837) and the 12th Shogun Ieyoshi TOKUGAWA (1837 - 1853). It is the era of Ienari TOKUGAWA when the present garden was almost completed. In addition an educational institution of the Bakufu navy was set up at the end of the Edo period (1603 - 1868). It became an Imperial villa in the Meiji period (1868 - 1912) and Enryokan was built as a guesthouse. The Emperor Meiji often used the garden to entertain foreign VIPs. After the World War , it was granted to Tokyo Metropolitan government and became a Tokyo Metropolitan park. It is a popular spot even today. 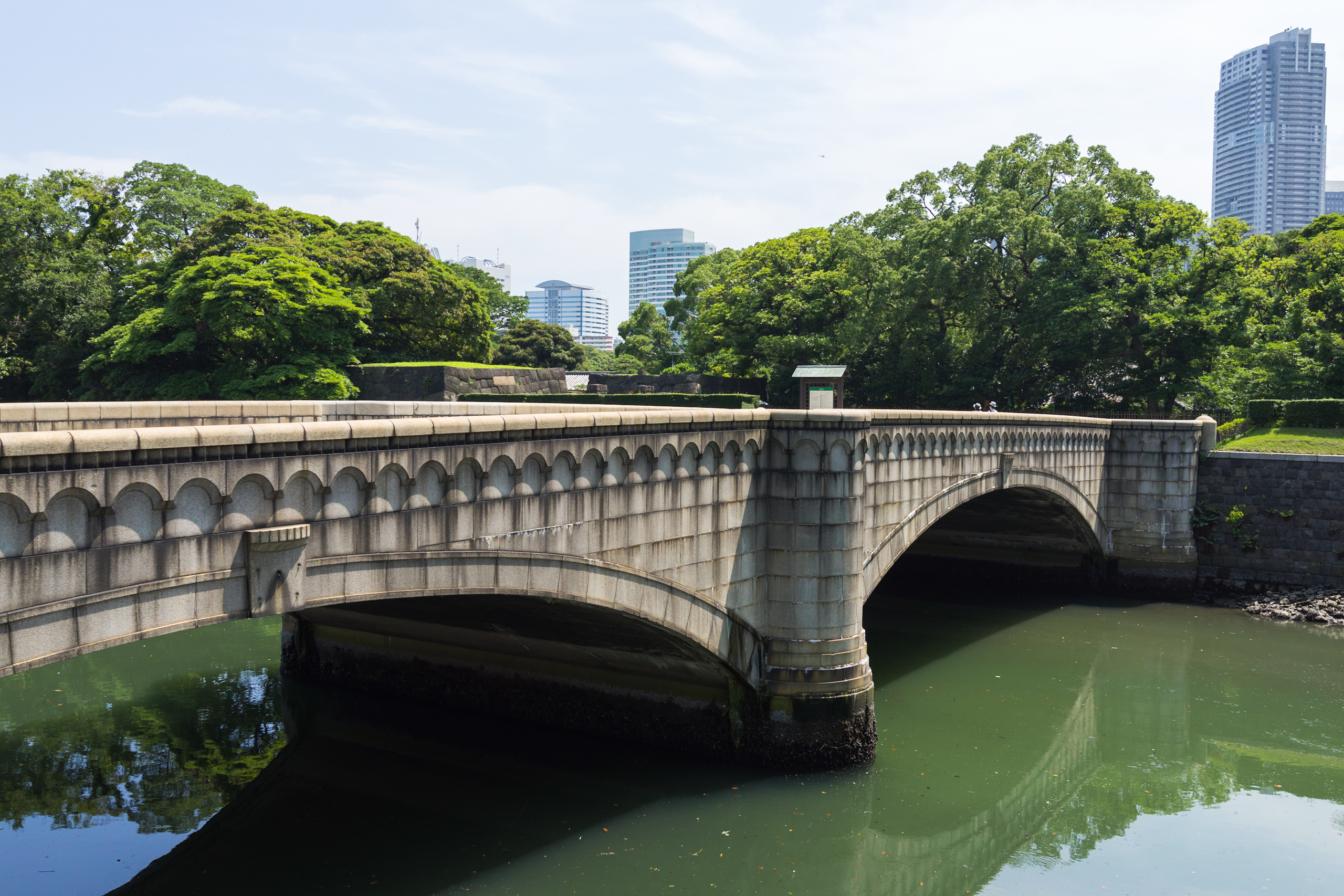 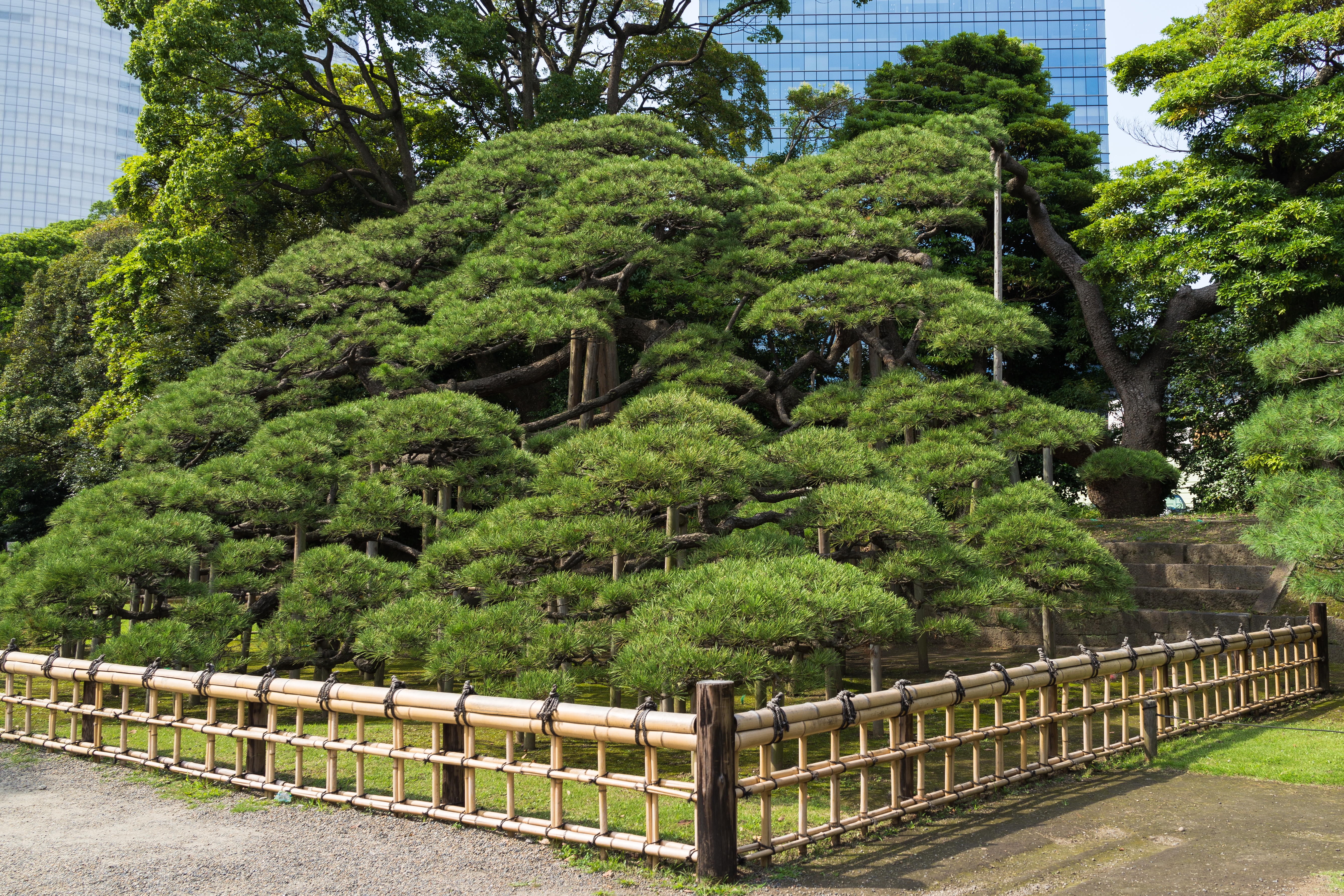 Three-hundred-year pine is located near Otemon Gate. It is one of the largest black pines in Tokyo, which is said to have been planted by the 6th Shogun Ienobu TOKUGAWA in 1709. It is gigantic and worth seeing.

The former site of Enryokan 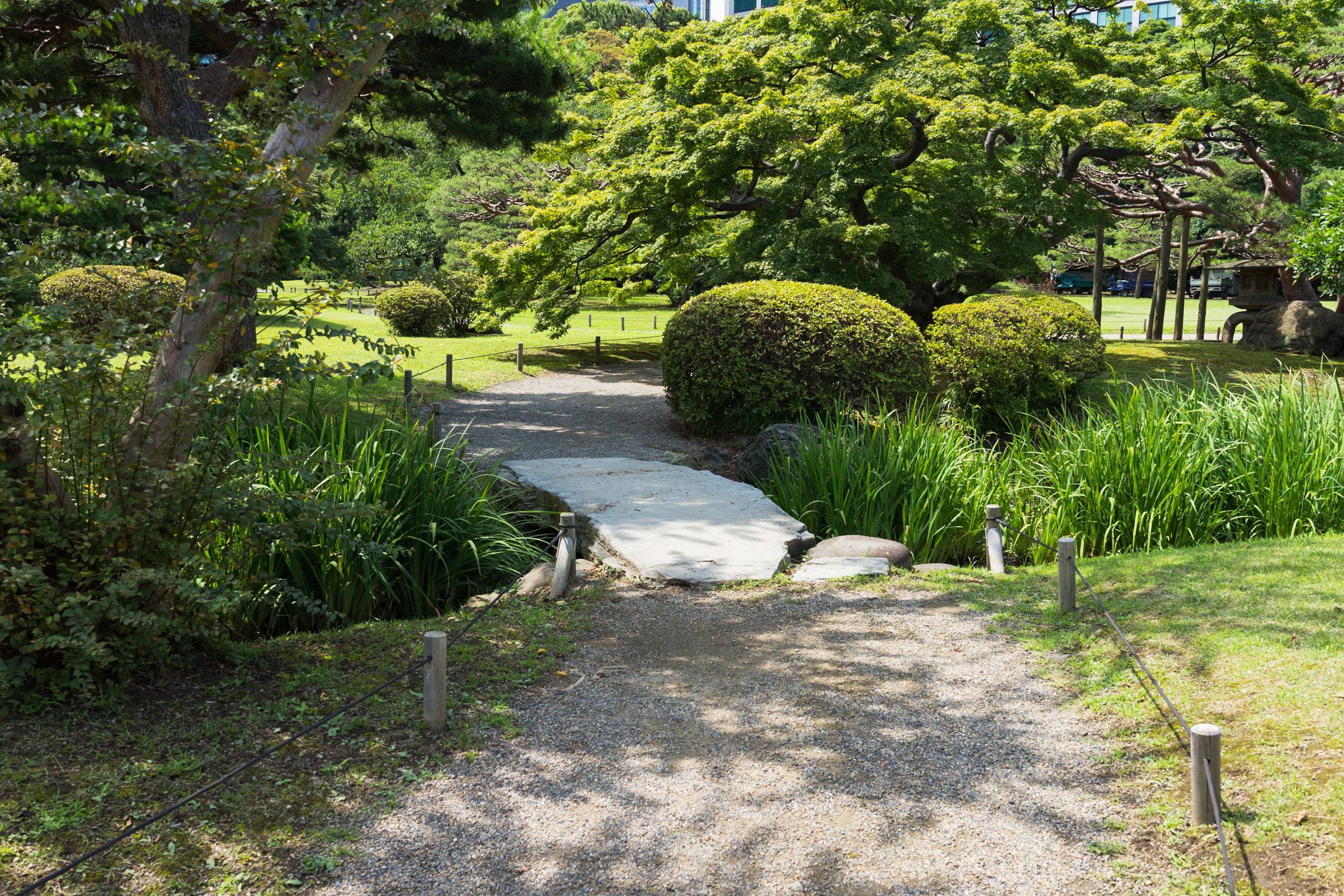 The former site of Enryokan

Today there is plenty of grass and pines at the former site of Enryokan, a guesthouse in the Meiji period. With a stream and stone lanterns, it is fun to take a walk there. By the way Enryokan was a single-story wooden stone pitching building completed in 1869, but it was damaged in an earthquake of 1887 and demolished in 1889. Now it is planed to restore Enryokan for the Tokyo Olympic Games in 2020. 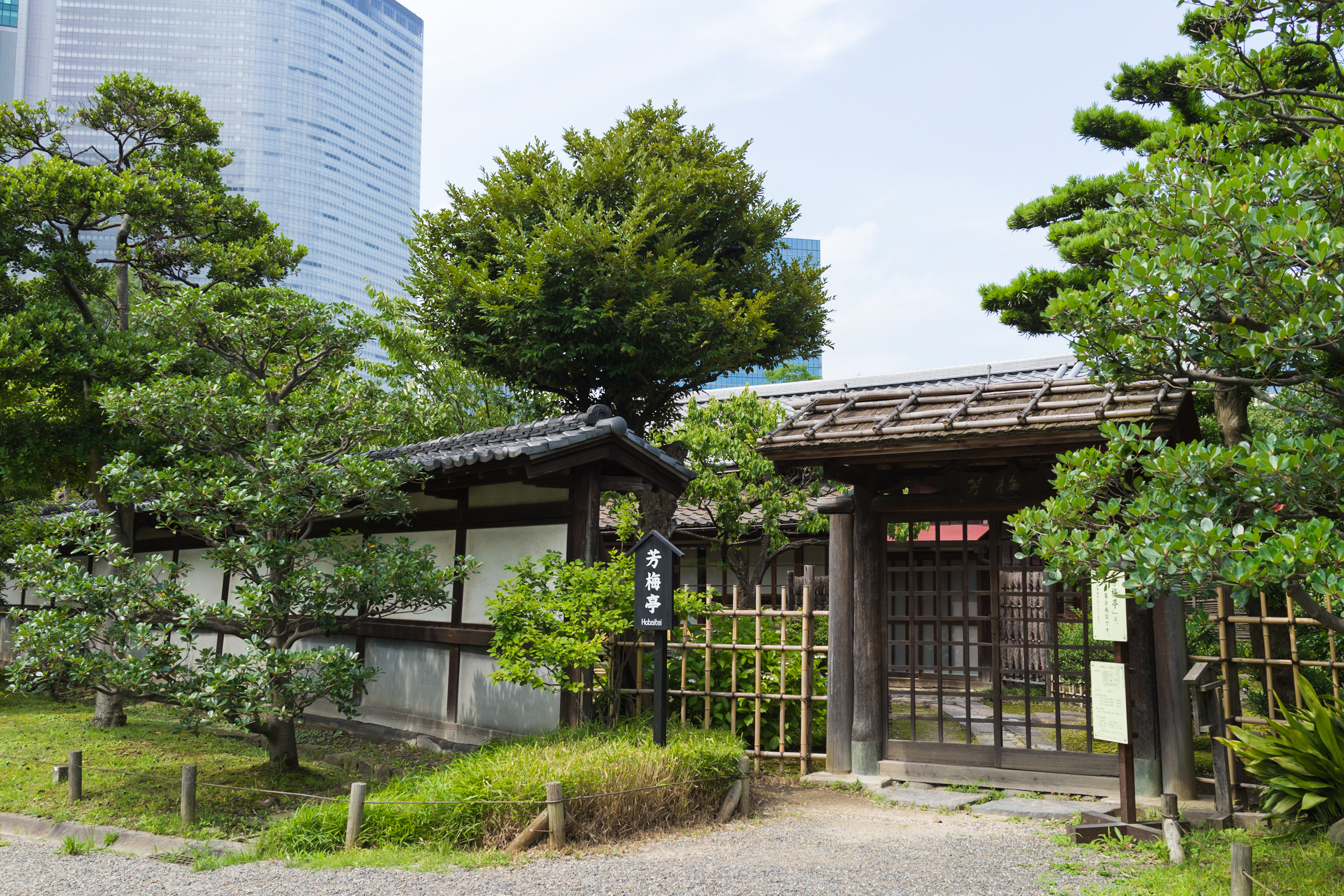 Hobaitei is the only building in Hamarikyu Gardens that survived the Great Kanto Earthquake and the air raid in World War II. It is a warm Japanese house. Now it is used as an assembly hall. 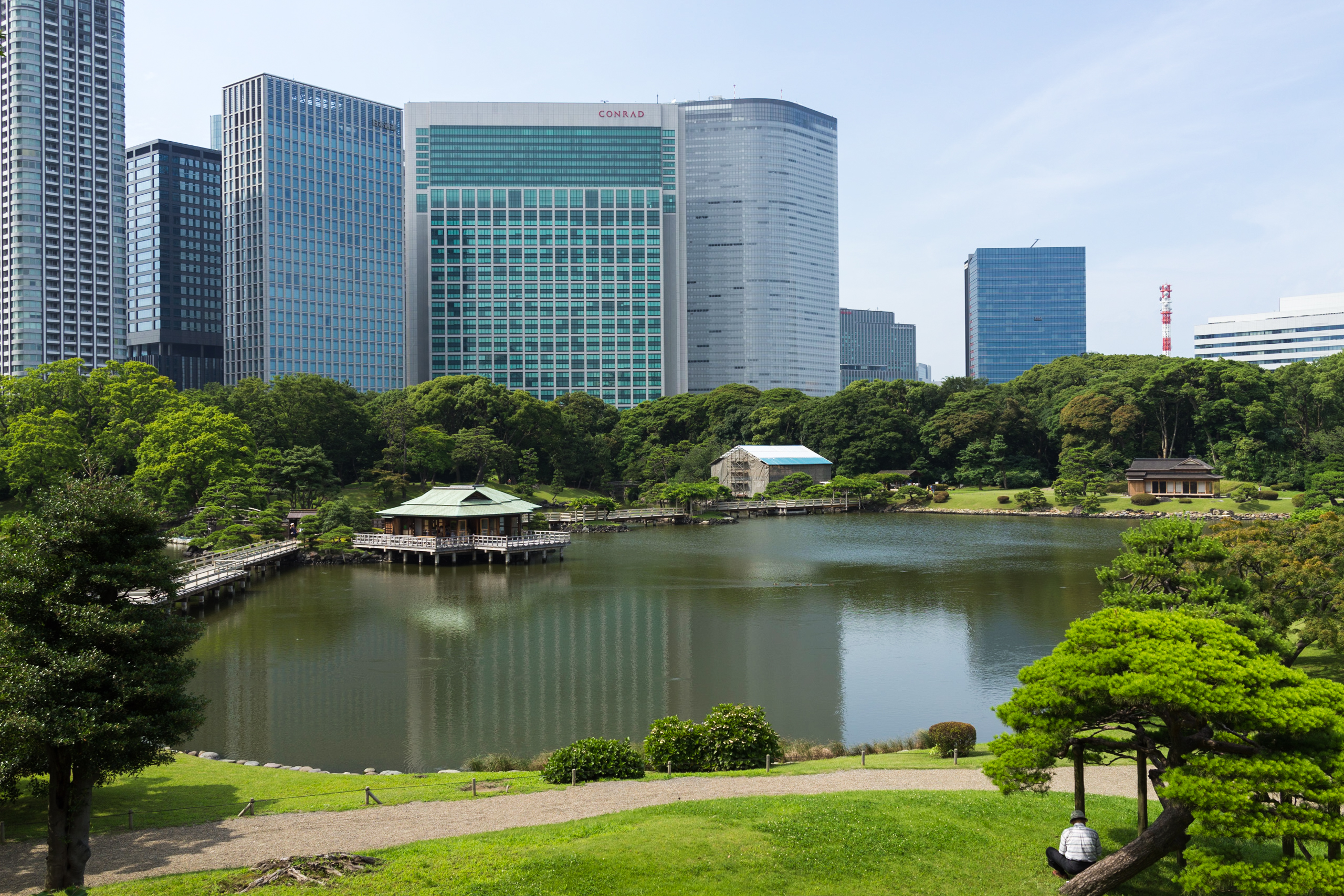 Shioiri Pond is the main attraction of Hamarikyu Gardens. It creates wonderful scenery with Otsutai Bridge, small islands and teahouses around the pound. The garden takes in seawater from Tokyo Bay, so people enjoy diversified scenery with the rise and fall of the tide. The combination of the traditional Japanese scenery consisting of Shioiri Pond and Nakajima no Ochaya Tea House and contemporary Shiodome Shiosite behind them is Tokyo’s own view. 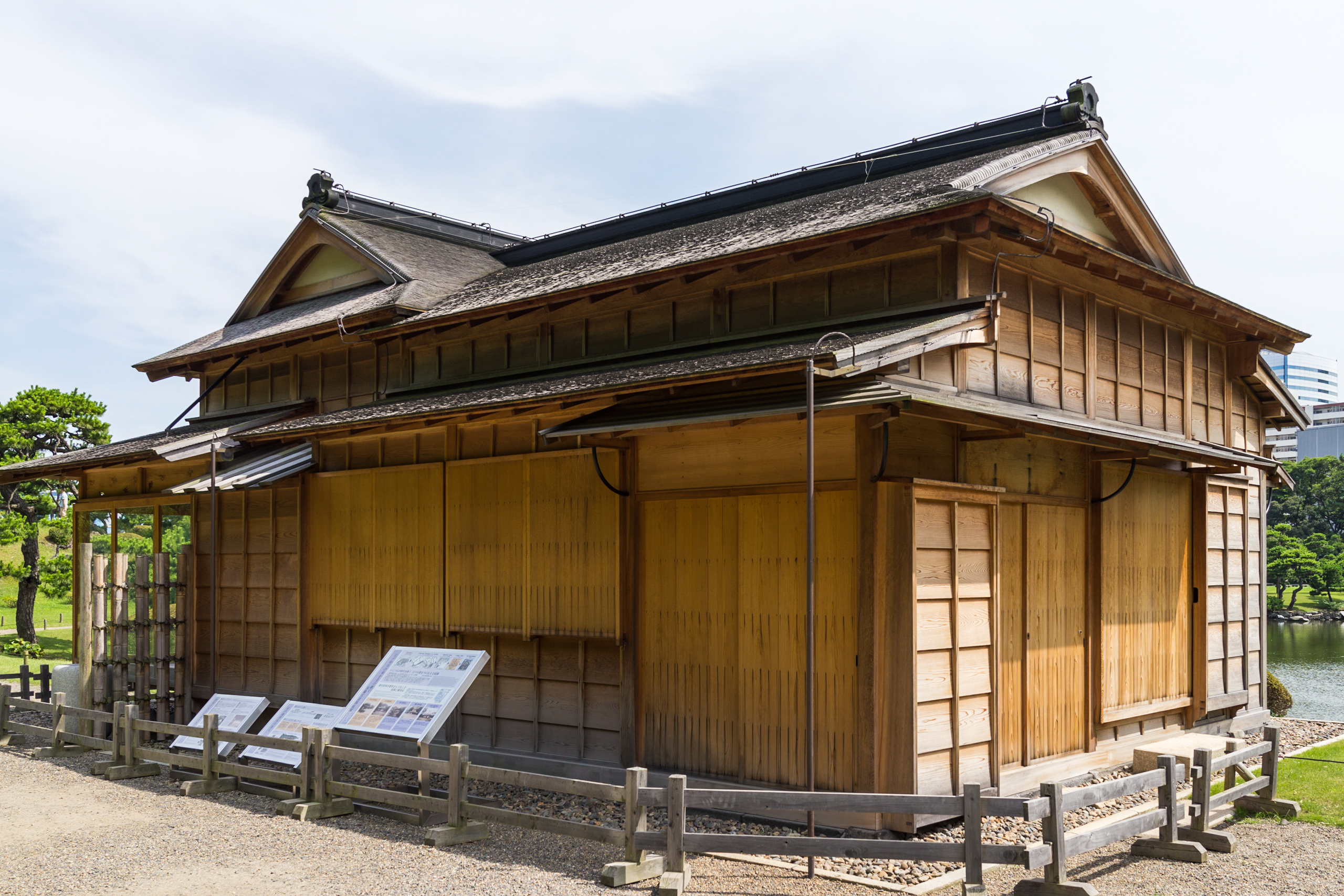 Tea houses are facilities that were built for a shoguns to take a rest when visiting Hamarikyu Gardens and receive a guest. They are traditional Japanese architecture and lend enchantment to the view. There were once 5 tea houses in Hamarikyu Gardens but all of them were burnt down in the Great Kanto Earthquake or the air raid in World War II. Nakajima no Ochaya Tea House was restored in 1983 and is open to the public today. You can enjoy powdered green tea and Japanese sweets for a fee. A view of Shioiri Pond from the inside of the tea house is wonderful. Matsu no Chaya Tea House was restored in 2010. It is not open to the public usually but open from 13:00 to 15:00 on every Thursday. It is recommendable because it uses a lot of valuable wood and the internal design is wonderful. Apart from that, Restoration of Tsubame no Chaya Tea House will be completed in fiscal 2014 and that of Taka no Chaya Tea House in fiscal 2017. 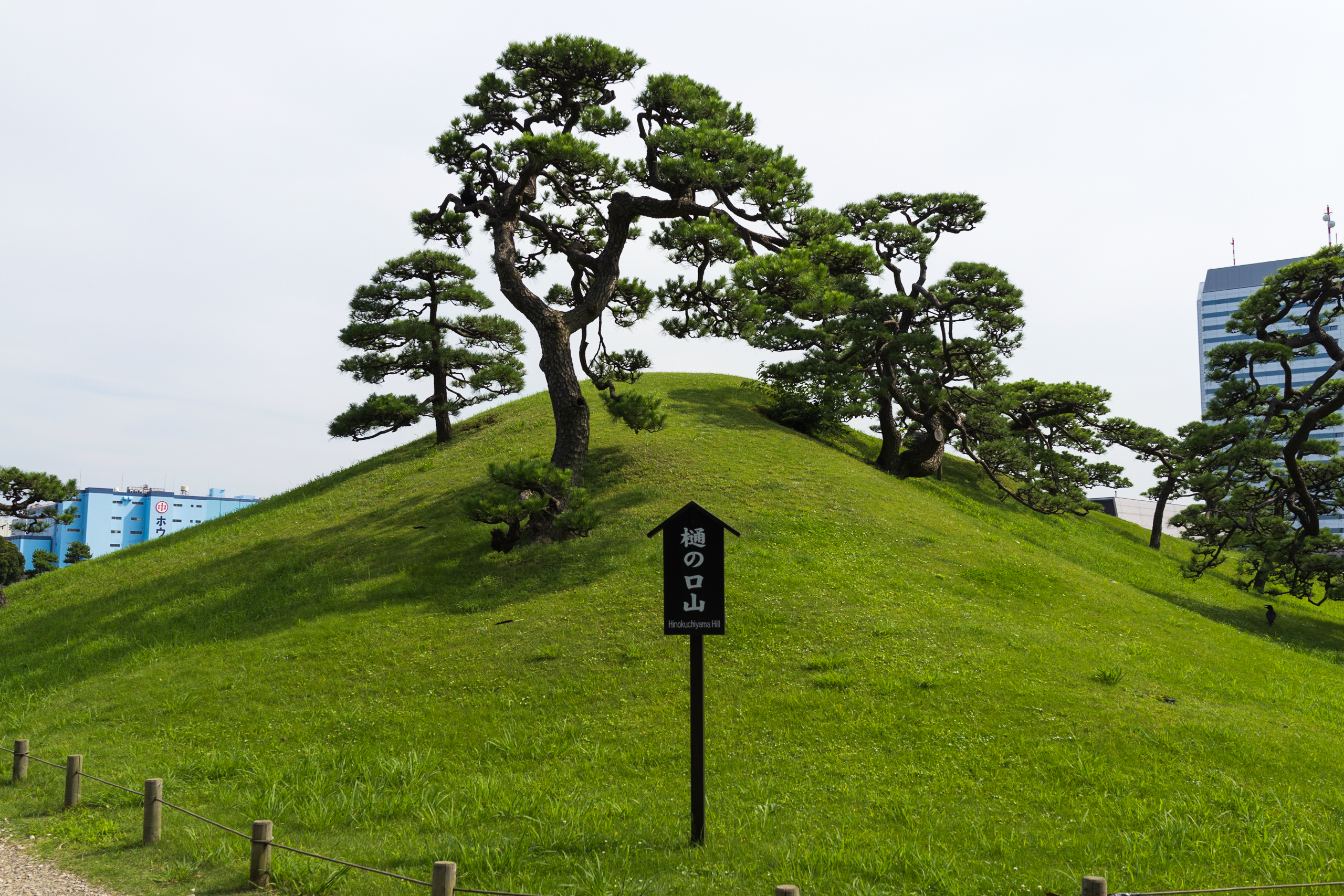 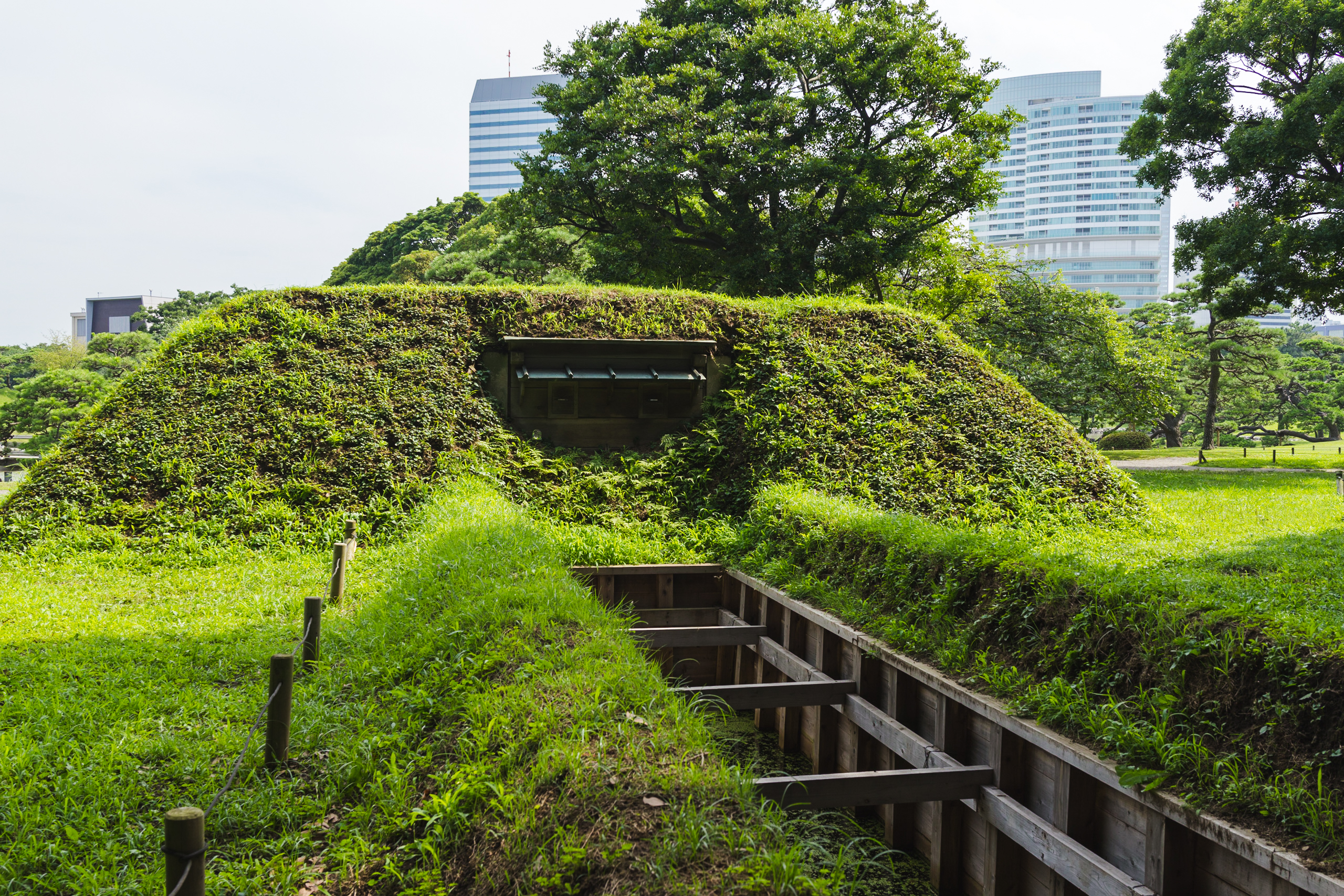 Kamoba is a site to hunt wild ducks. People invite wild ducks that have gathered at a pond called Motodamari to a canal, using domestic ducks while observing the state of things from a small window and then catch them with handy catching nets called Sadeami. Today wild ducks that have been caught are released. By the way people caught them using falcons in the old days. In Hamarikyu Gardens there are two wild duck hunting sites; Koshindo Kamoba constructed in 1778 and Shinsenza Kamoba constructed in 1791. They are not used today but they are the only remains in Tokyo. 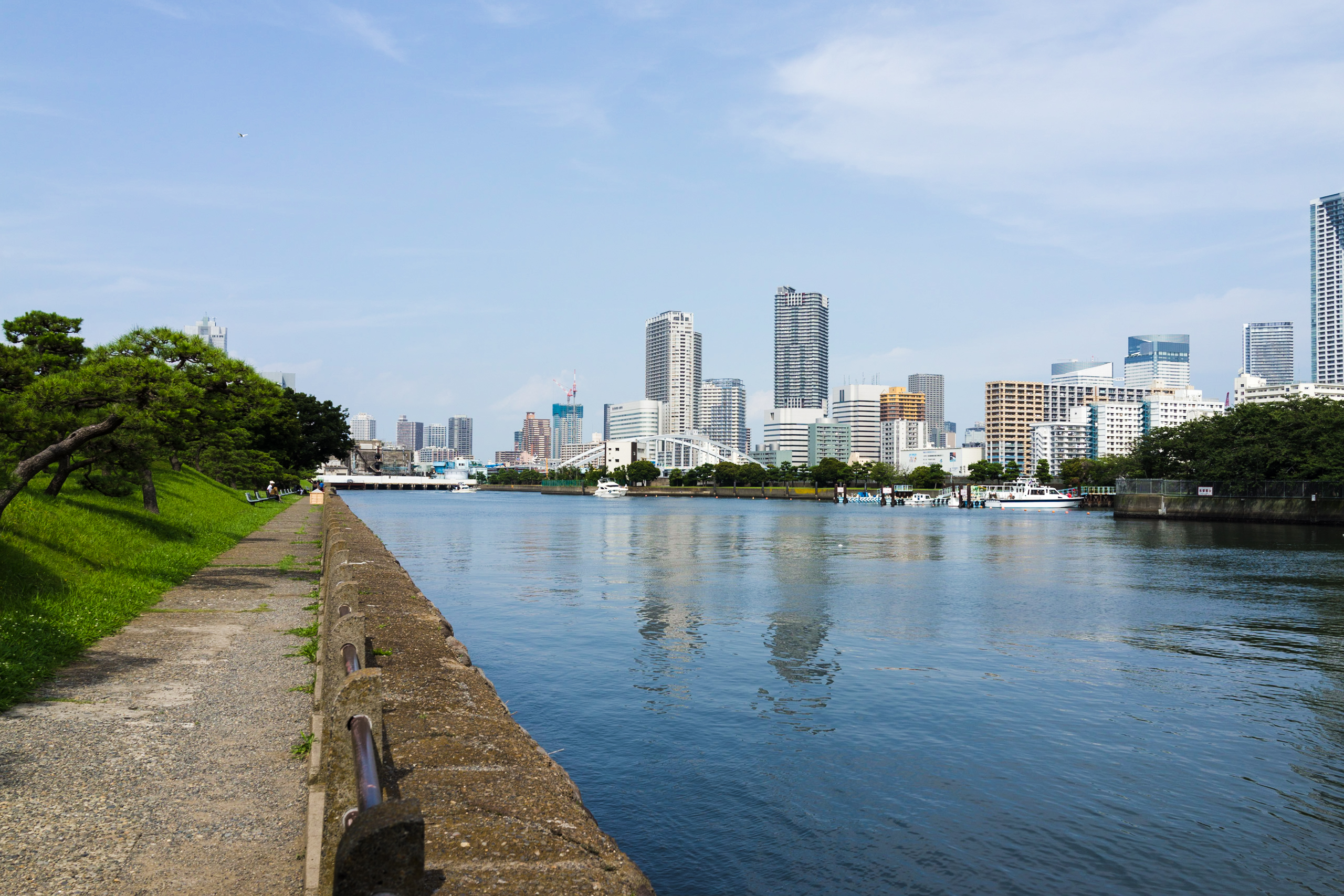 The view of Tokyo Bay and a seaside area

You can enjoy a view of Tokyo Bay and a seaside area from Hamarikyu Gardens. A landing place for waterbuses that cruise Tokyo Bay or the Sumida River is also located there. 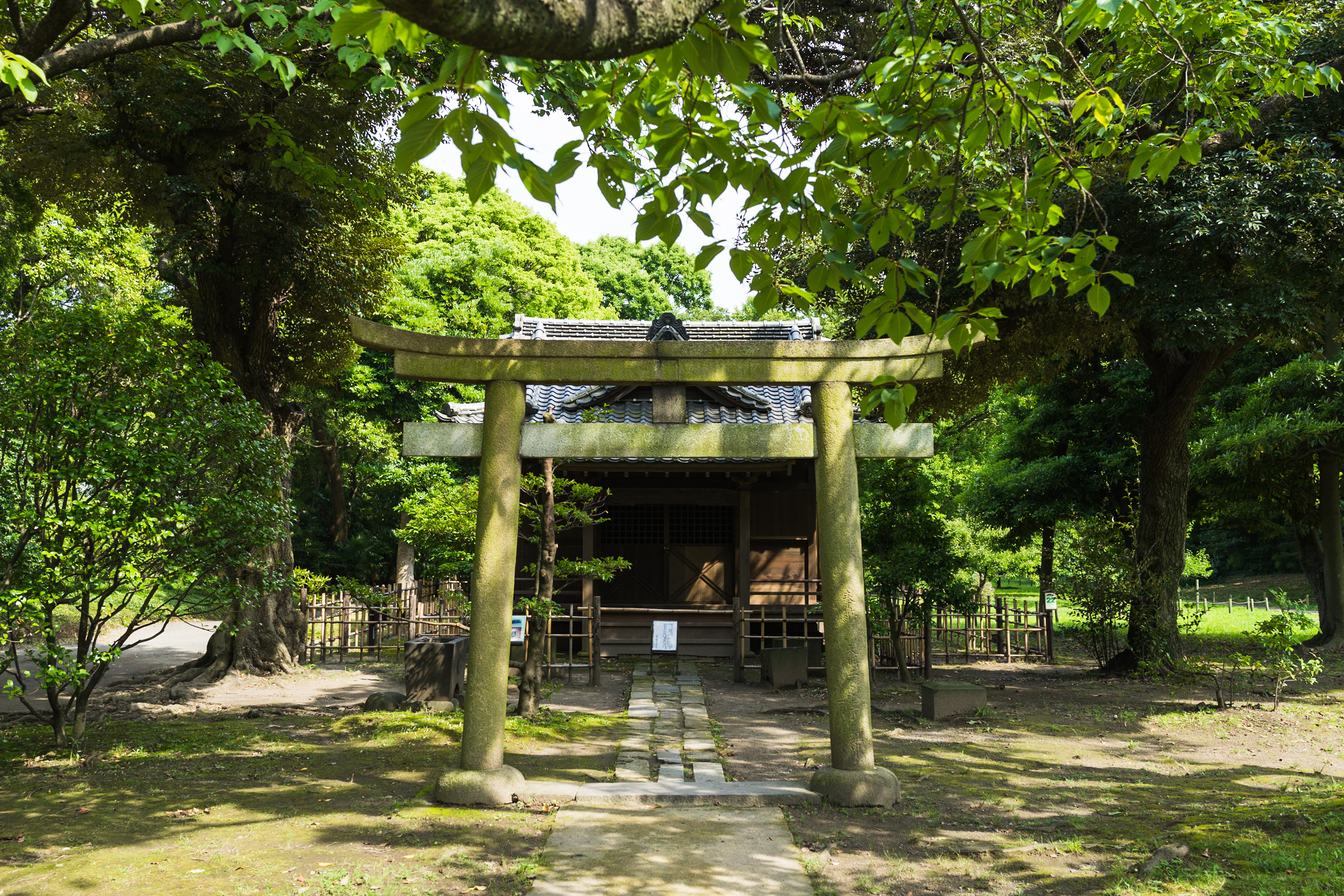 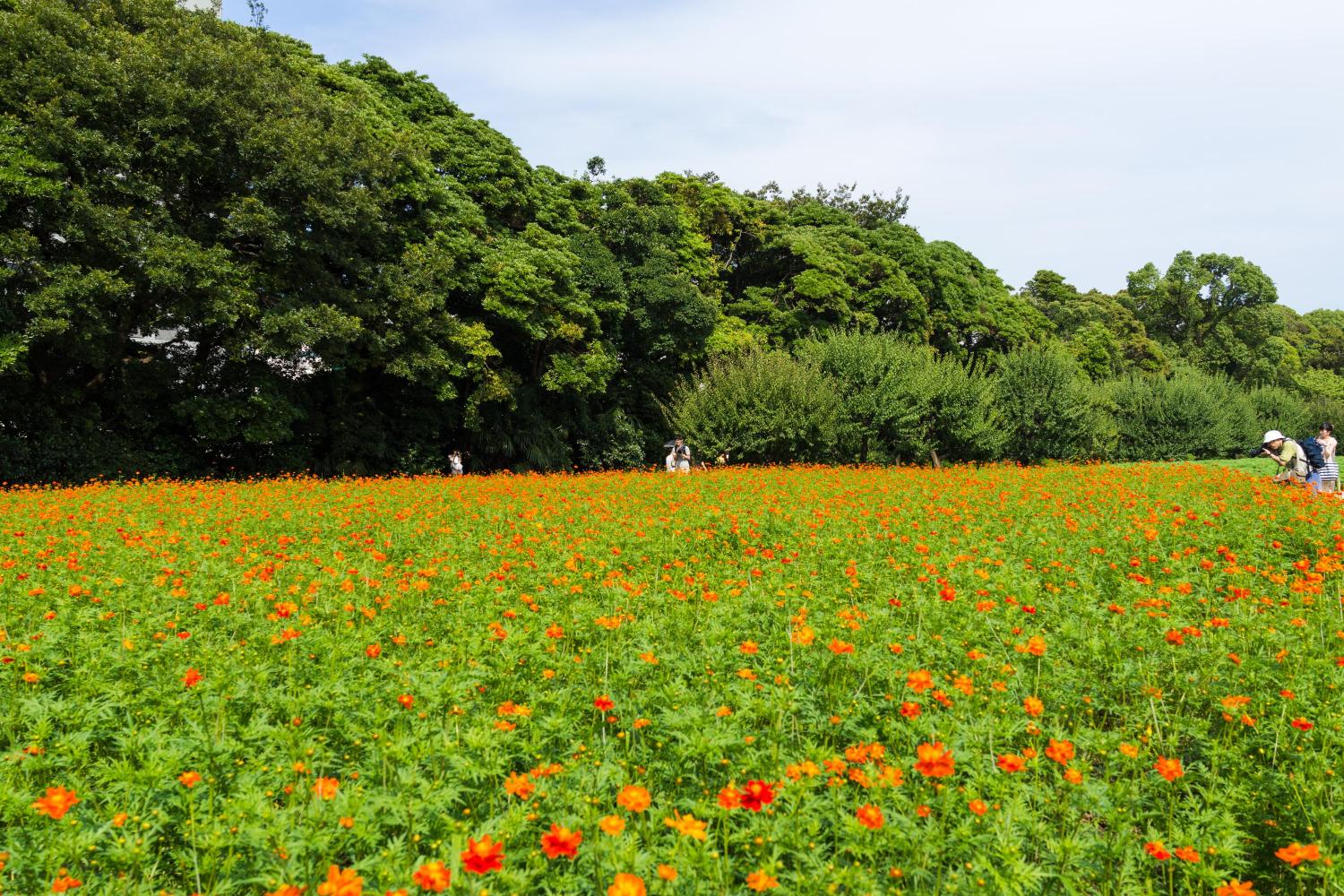 Canola flowers are in full bloom in May and cosmos sulphureus from Jury to August in the flower garden. You can see the beautiful landscape of yellow (or orange).

In Hamarikyu Gardens you can enjoy beautiful traditional Japanese scenery. I recommend you visit there when coming to Tokyo.

Shiodome: a town where both new and old Tokyo exist together
https://www.ambassadors-japan.com/en/tokyodailylife/338/