Ningyocho: an attractive town having many old stores 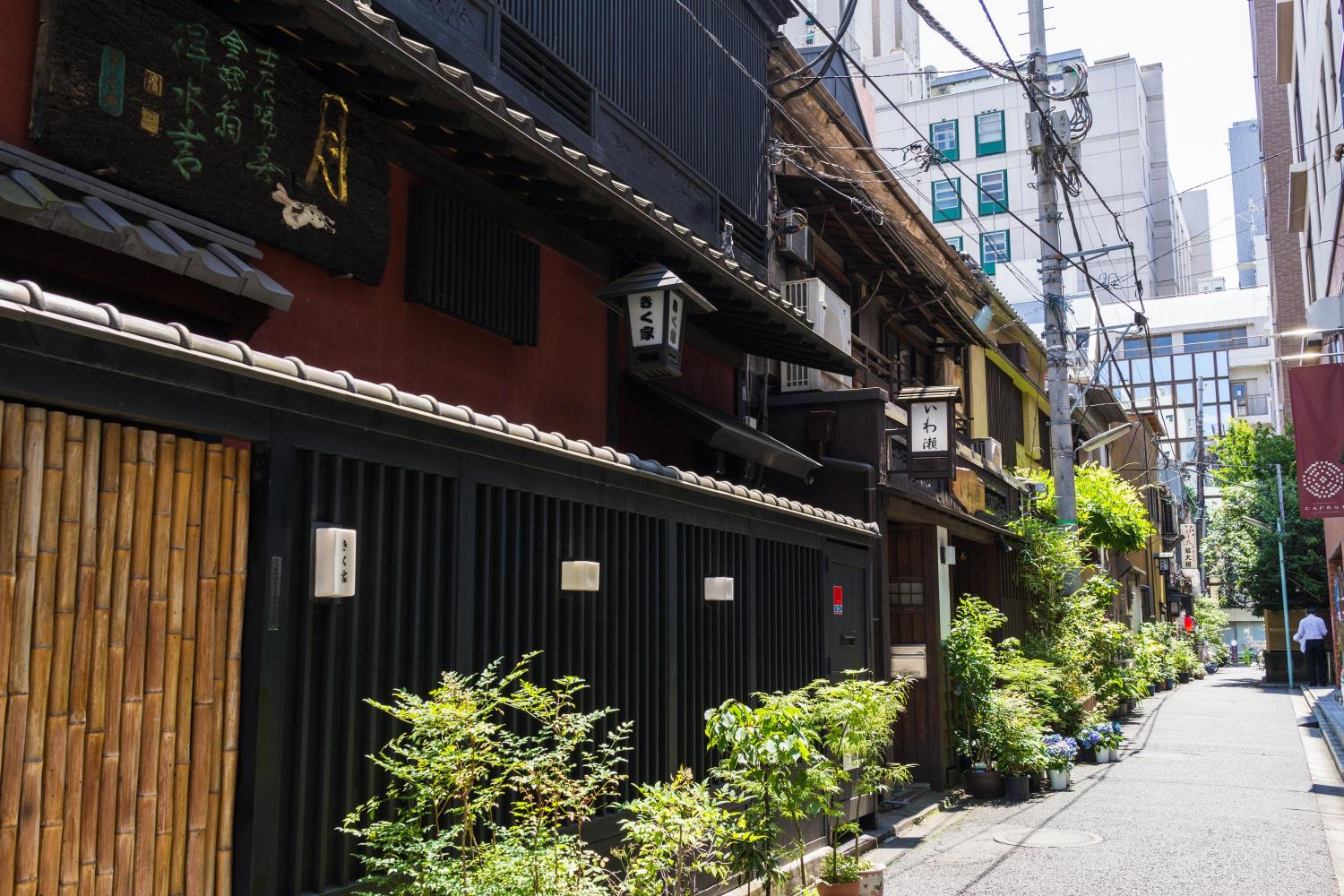 Ningyocho is a downtown area from the Edo period (1603 - 1868), which is located near Nihonbashi. It is known for many old restaurants and stores that sell Japanese traditional crafts. The main attractions are Amazake Alley (Amazake Yokocho) and Ningyocho Dori Street, which have various restaurants and stores that sell Japanese traditional crafts, Geisha Alley (Kogiku Street) lined with old Japanese restaurants and Suitengu Shrine, which is famous for the god of pregnancy and smooth delivery. There are also many popular restaurants such as Ningyocho Imahan, a famous Sukiyaki restaurant and Tamahide, a chicken dish restaurant from 1760. It is fun to stroll around the area because of many historical stores. Also Meiji-za Theater, a representative theater of Tokyo and Hamacho Park are located at the end of Amazake Alley, and the park faces the Sumida River. 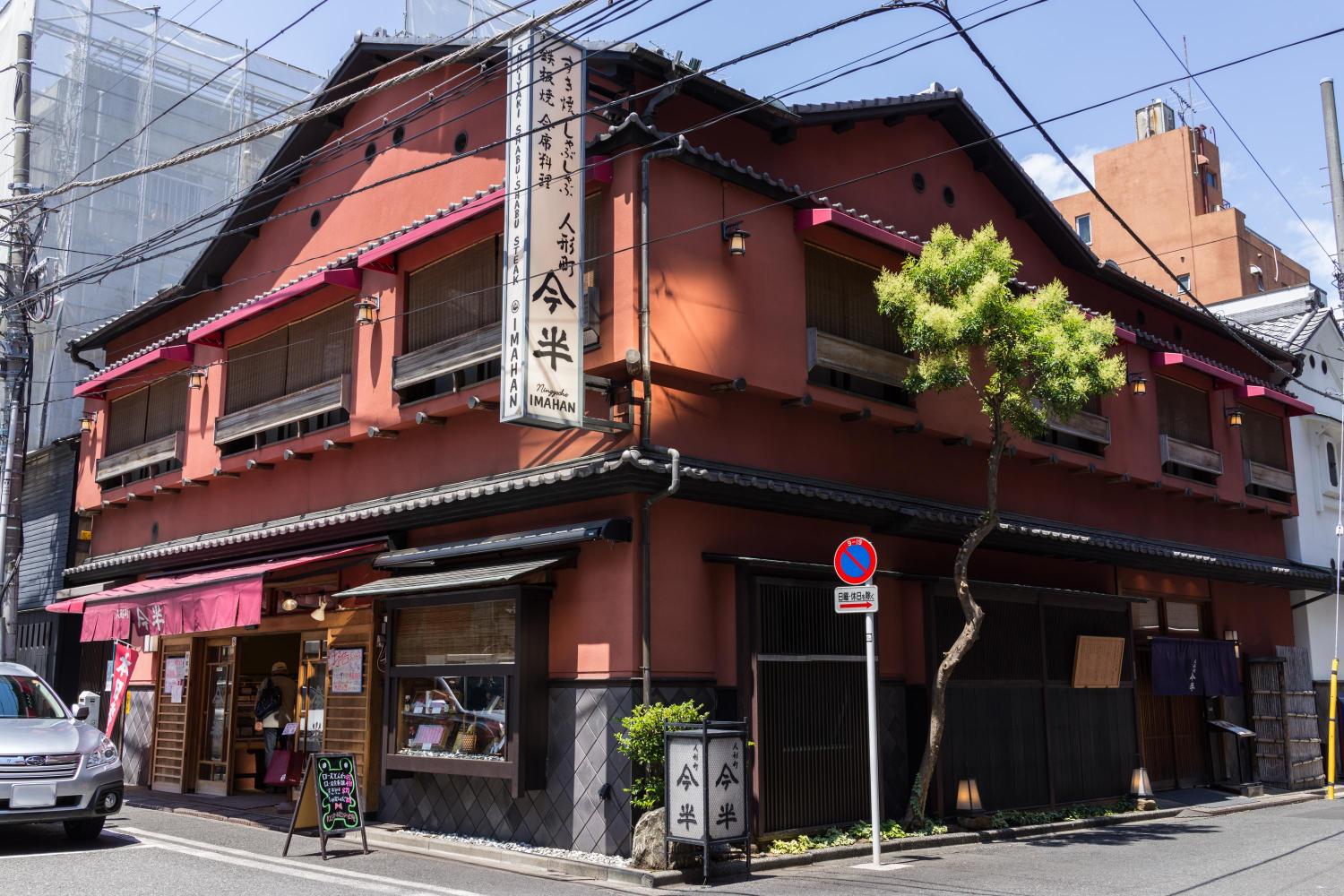 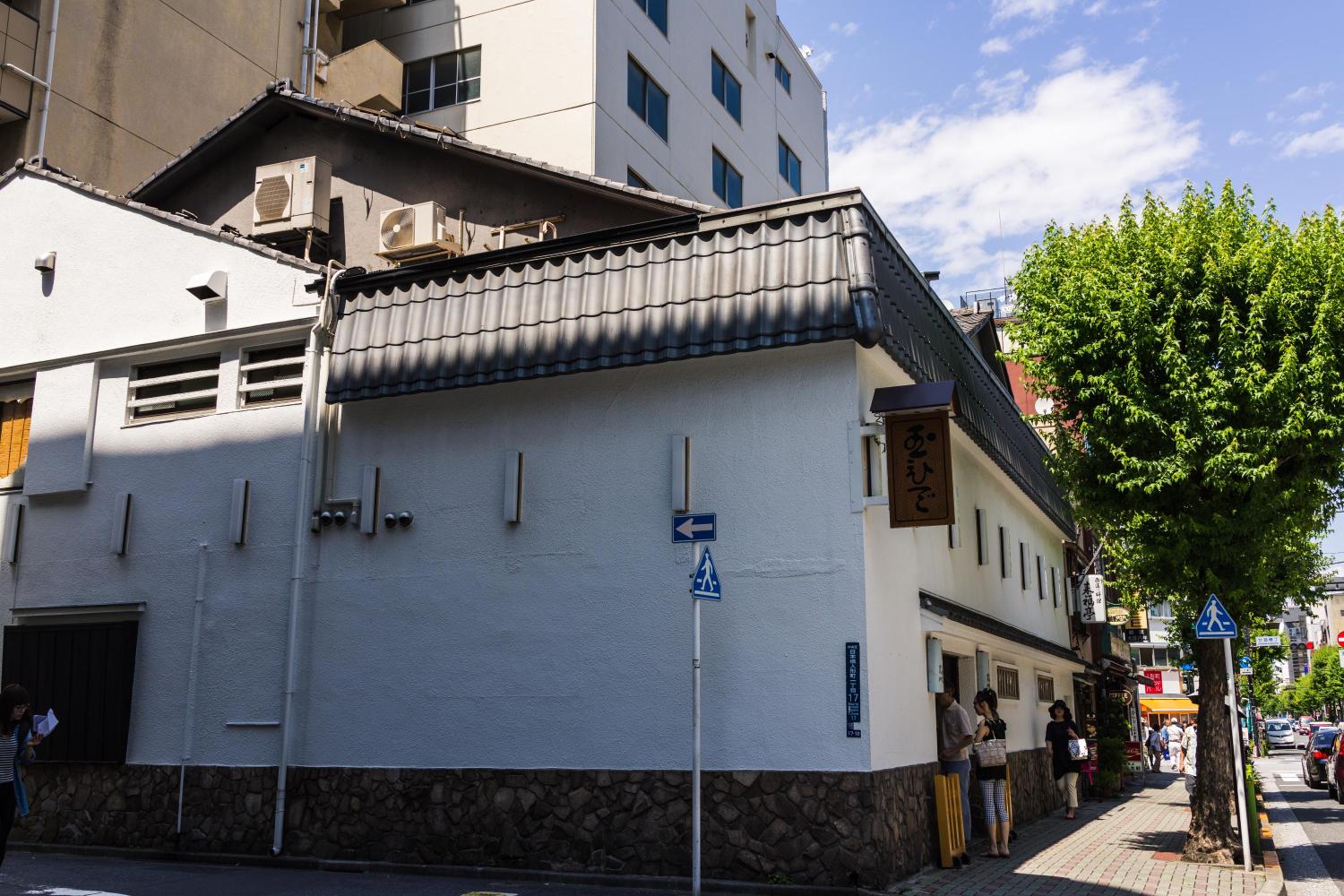 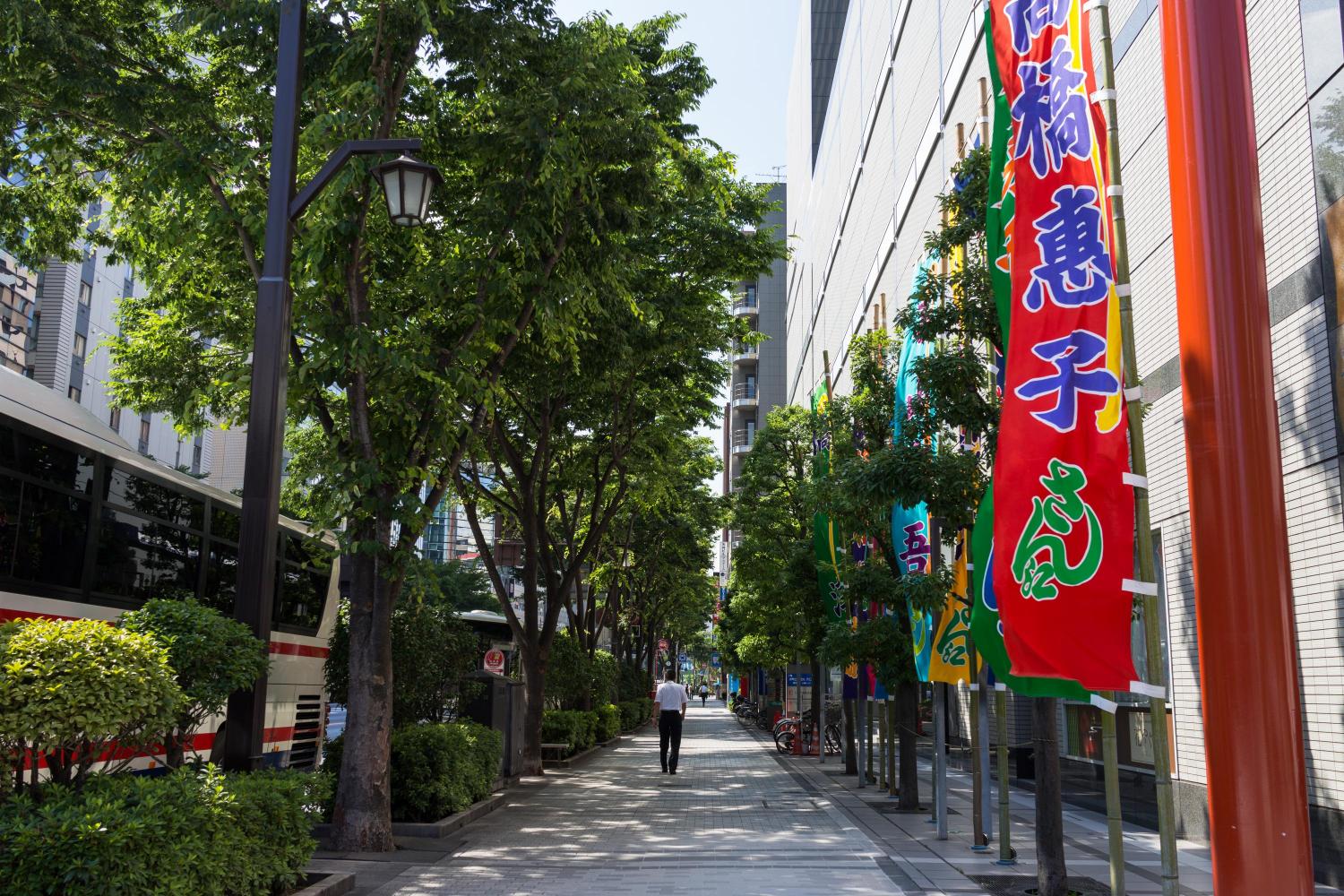 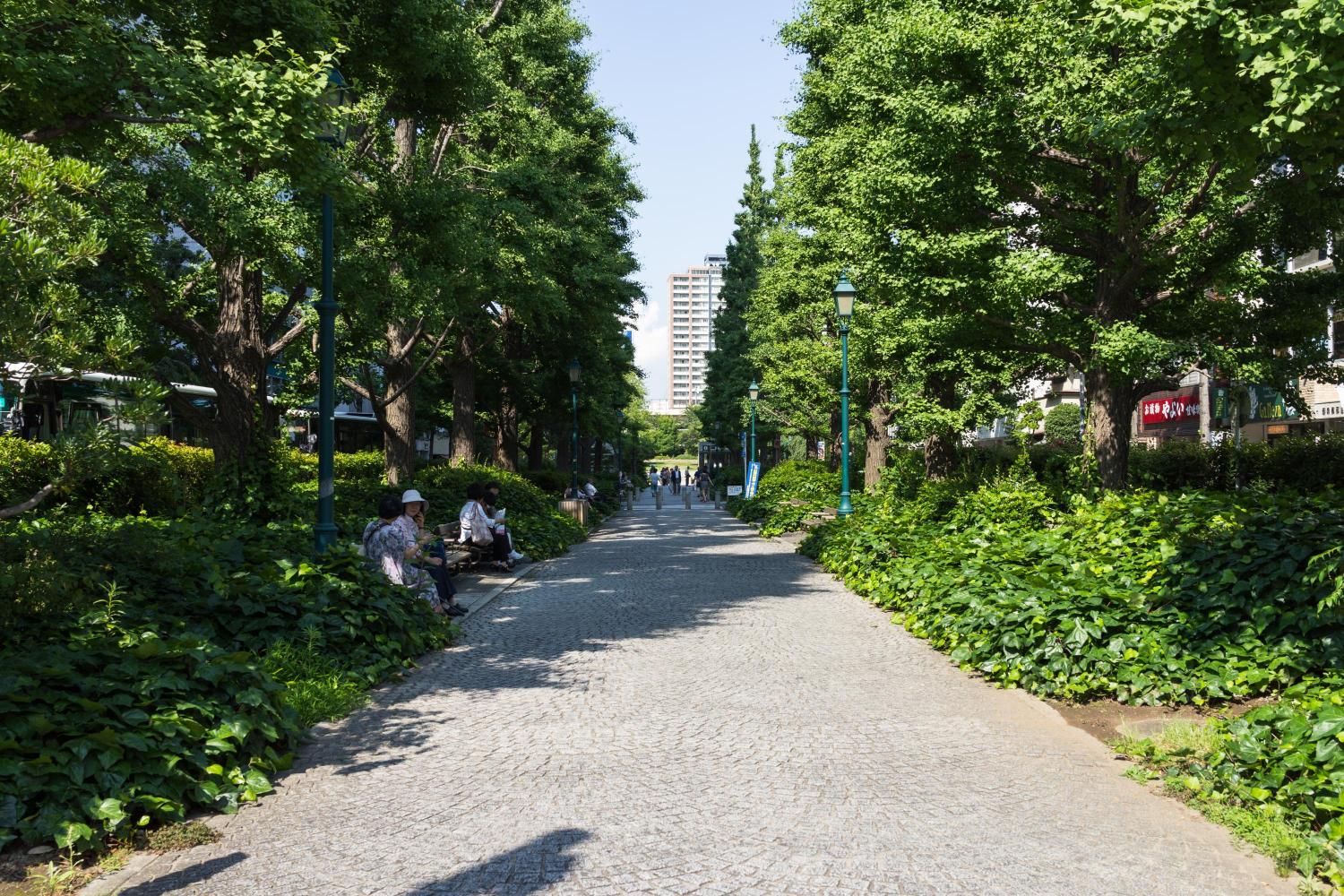 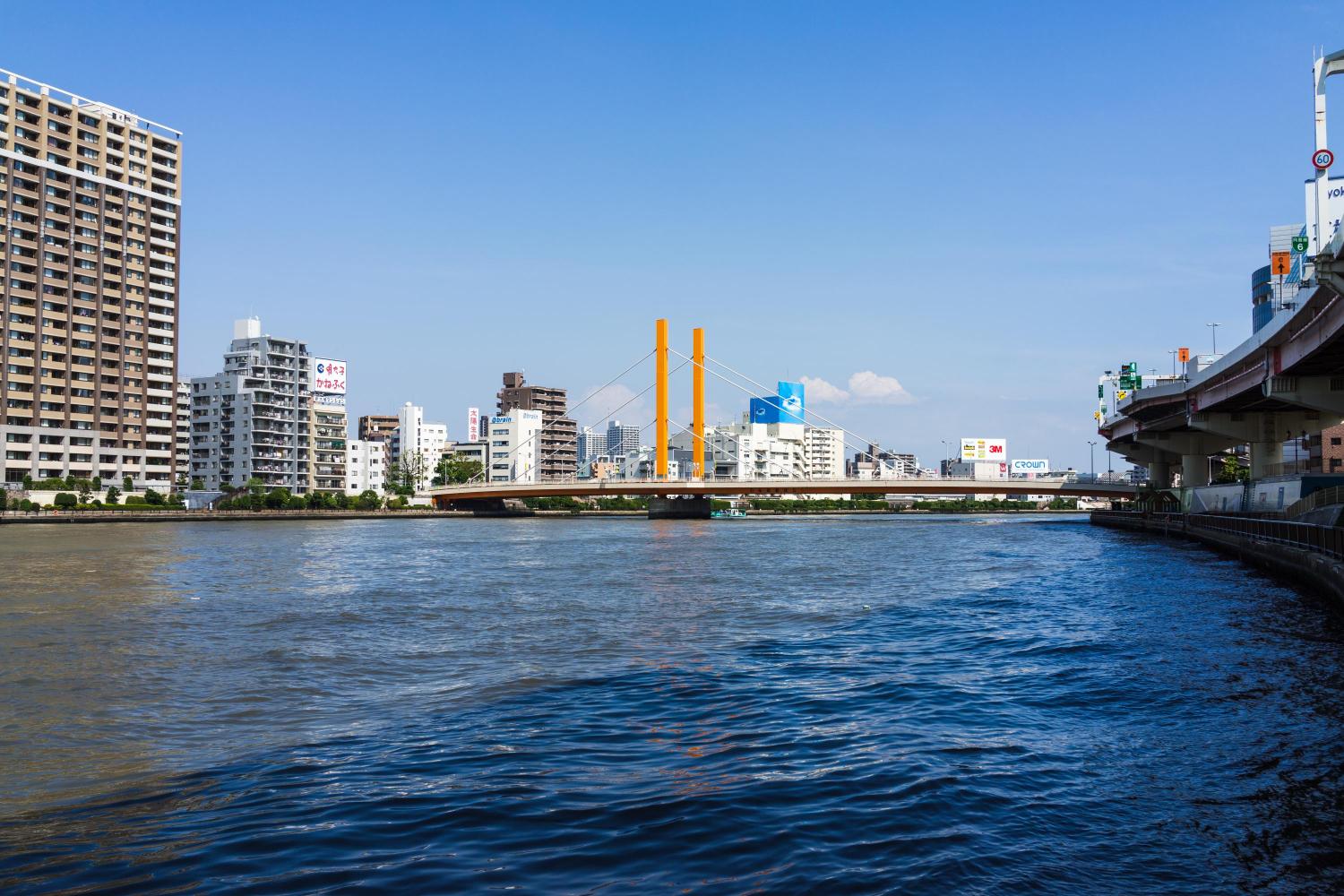 Ningyocho had been a wetland near the sea when Ieyasu TOKUGAWA moved to Edo (present-day Tokyo) in 1590. He began to reclaim the surrounding area and Ningyocho area was completed in the early 17th. The area on the east of Nihonbashi including Ningyocho had developed as a town of textile goods. Ningyocho also attracted people as a town of play. As for Kabuki (a traditional Japanese play) Nakamura-za Theater, one of the three major kabuki theaters in Edo opened in 1651 and Ichimura-za Theater as well in 1652. Ningyo Joruri (a Japanese puppet drama) became popular too and many theaters were built. Accordingly puppeteers, craftsmen and merchants of doll gathered and that became the origin of the town's name (Ningyo of “Ningyocho” means a doll in Japanese). Ningyocho had come to flourish as the center of play for about 200 years until 1841 when the theaters were burnt down and moved to Asakusa later. By the way there was once Yoshiwara, the red-light district authorized by Edo bakufu (Shogunate government) from 1612 to 1657.
Ningyocho continued to develop after the Meiji period (1868 - 1912). Suitengu Shrine was moved to the area and Yoroibashi Bridge was constructed over the Nihonbashi River in 1872, so Nigyocho became one of the most bustling shopping and entertainment areas in Tokyo. In those days many old stores that still remain today were opened. Hanamachi (geisha district) called Yoshicho was also formed and flourished as one of the six hanamashi in Tokyo. However it declined after the Oil Shock in the 1970s and only Hamadaya still remains today as for Ryotei, a traditional Japanese restaurant where geisha entertains guests. Though Ningyocho has become a business district today, it is popular because of many old stores. 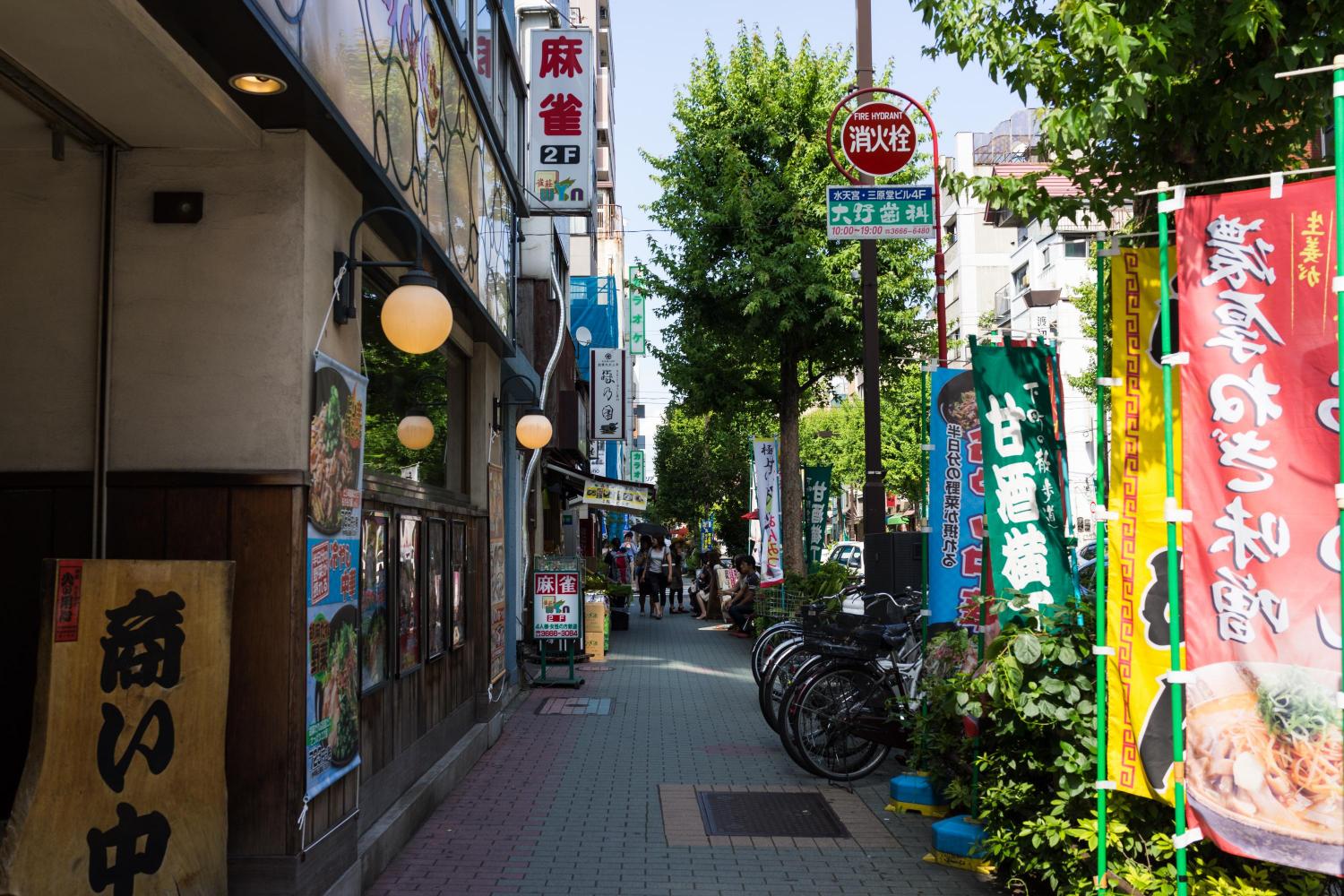 Amazake Alley (Amazake Yokocho) is a shopping street of about 400 meters from Amazake Yokocho crossing to the Meiji-za Theater. The origin of the name of the street came from Owariya, which was once opened on the street and sold Amazake (sweet mild sake) in the early Meiji period. There are various shops serving foods such as Amazake, Taiyaki (a sea bream shaped pancake stuffed with bean-jam), rice cracker, etc. and stores of Japanese traditional crafts such as Tudura (a wicker basket) and Shamisen (a Japanese three-stringed guitar) along the street. Yanagiya is one of the three major Taiyaki shops in Tokyo, which was established in 1916. It is a popular shop and there is always a line of people. Also Kameido for Ningyo yaki (Doll ware cake) and kawara-senbei (rice cracker shaped like a Japanese traditional roof tile), Ningyocho Shinoda Zushi for inarizushi (a pouch of fried tofu filled with sushi rice), Futaba for tofu (bean curd) and Gyokueido Hikokuro for Japanese sweets are famous. 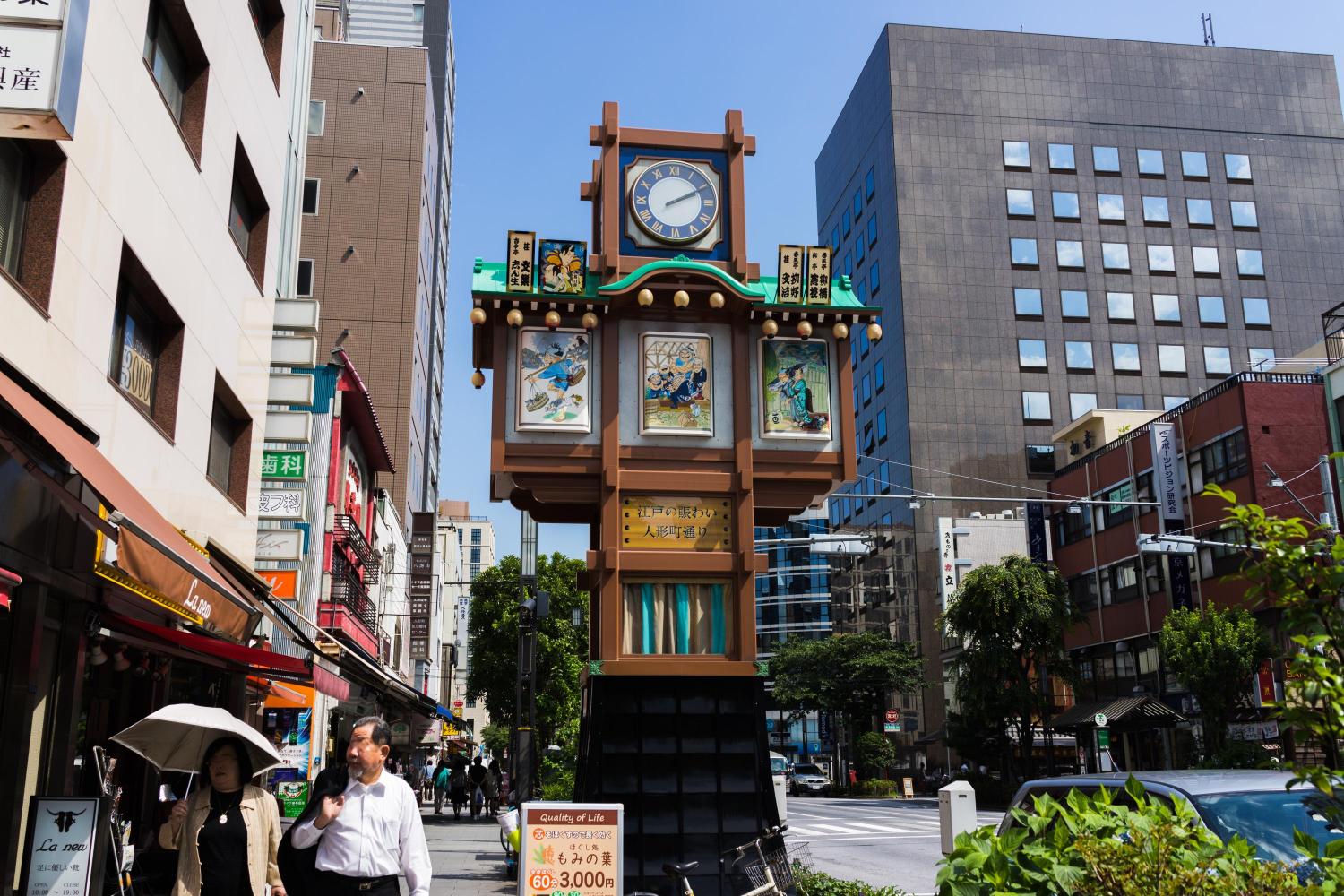 Ningyocho Dori Street is the main street of the area and there are various restaurants. Many seasonal events are held there, for example, the chinaware market in the beginning of August, the doll market in the middle of October, the “bettara” market in the end of October (“bettarazuke” is a kind of pickled Japanese radish and a specialty food in Tokyo) and the New Year's fair in the end of December are famous. Also there are two trick clocks called Karakuri Yagura; the Edo Rakugo (traditional comic storytelling) version and the Edo Firefighter version on Ningyocho Dori Street and they are symbols of Ningyocho. Karakuri ningyo (mechanical dolls) move every hour from 11:00 to 19:00. 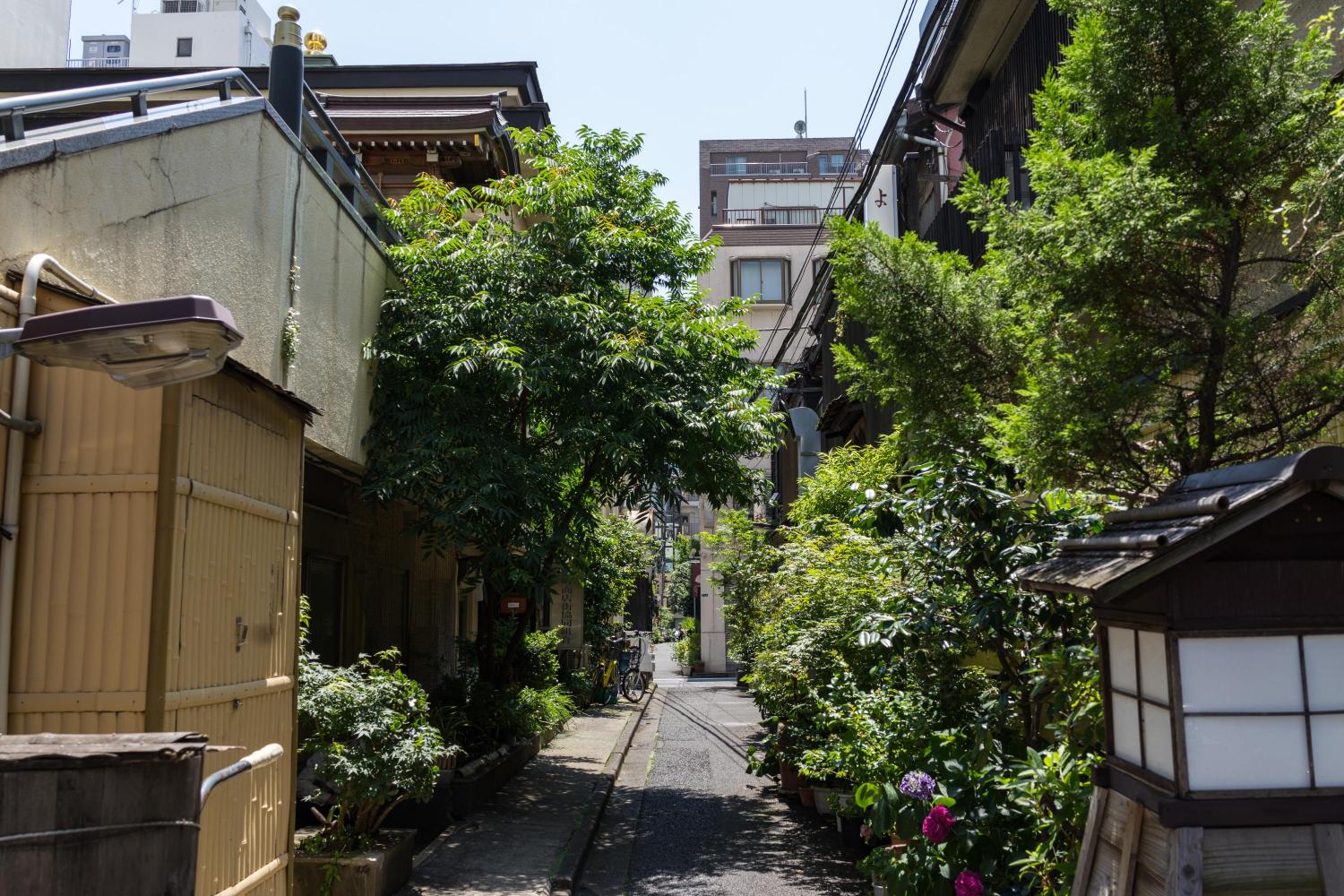 There was once Hanamachi (geisha district) called Yoshicho in Ningyocho and it is Geisha Alley (Kogiku Street) that retains the traces of Yoshicho. Geisha Alley is located behind Okannonji Temple and lined with many Izakaya (Japanese tavern) and Kaiseki ryori (formally arranged dinner to enjoy sake) restaurants. It is tastefully and nice place. Especially Yoshiume Yoshichotei is a Japanese restaurant made from a restored Sukiya style Japanese house, which was built in 1927 and is designated as Registered Tangible Cultural Properties. It is famous for Negima (green onion and meat) hot pot. 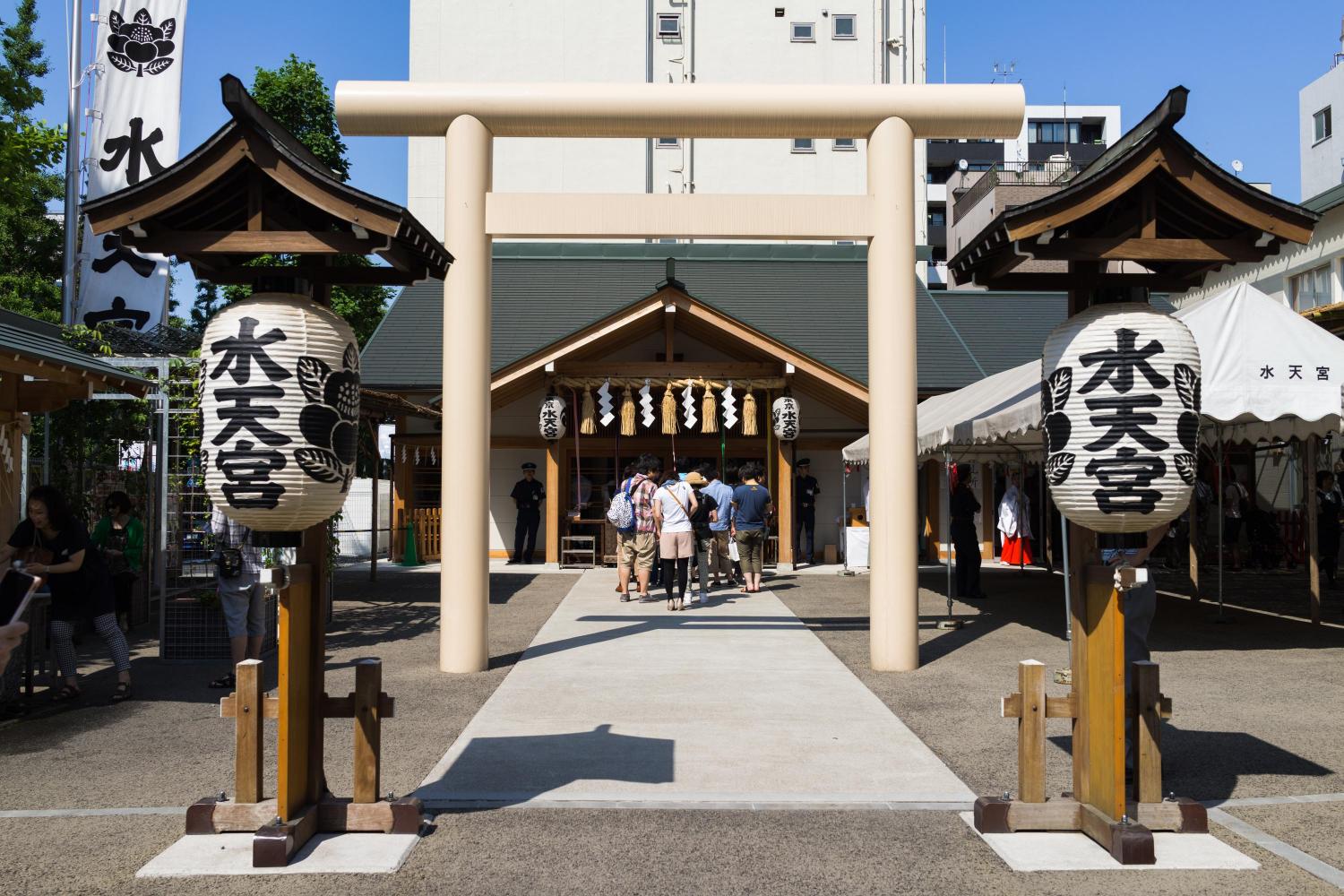 Suitengu Shrine has the benefits against drowning and of pregnancy and smooth delivery, and is devoutly worshiped by many people. A lot of pregnant women and couples wanting children who live in and around Tokyo visit there, and the shrine is always crowded. The enshrined deities are Ame no Minakanushi no Kami, Emperor Antoku, Kenreimonin (TAIRA no Tokuko) and Nii no Ama (TAIRA no Tokiko). Ame no Minakanushi no Kami is the source god in Japanese Mythology. Emperor Antoku is an emperor in the later 12th century. He was put up by the Taira family and enthroned but was expelled from Kyoto (the former capital of Japan) by the Minamoto family who were opposed to the Taira family, and died by drowning herself with Nii no Ama, who was the grandmother, in Dan no ura. Kenreimonin was the mother of the emperor, who survived the Battle of Dan no ura and spent her days praying for the repose of the emperor and the Taira family’s soul. The head shrine of all Suitengu shrines is Suitegun Shrine in Kurume city, Fukuoka prefecture, which was established in 1190, and the beginning of Suitengu Shrine in Tokyo was when the divided enshrined deities were transferred to the main residence of the Kurume Domain in Mita, Tokyo in 1818. The deities were transferred to the present site where the villa was located in 1872. As of 2015 the buildings are under reconstruction and temporary buildings are located near the Meiji-za Theater. The new buildings are going to be completed in 2016.

Ningyocho is an attractive town where there are many old stores. Why don’t you enjoy walking around the town and eating foods?