Nihonbashi: a shopping district flourished since the Edo period 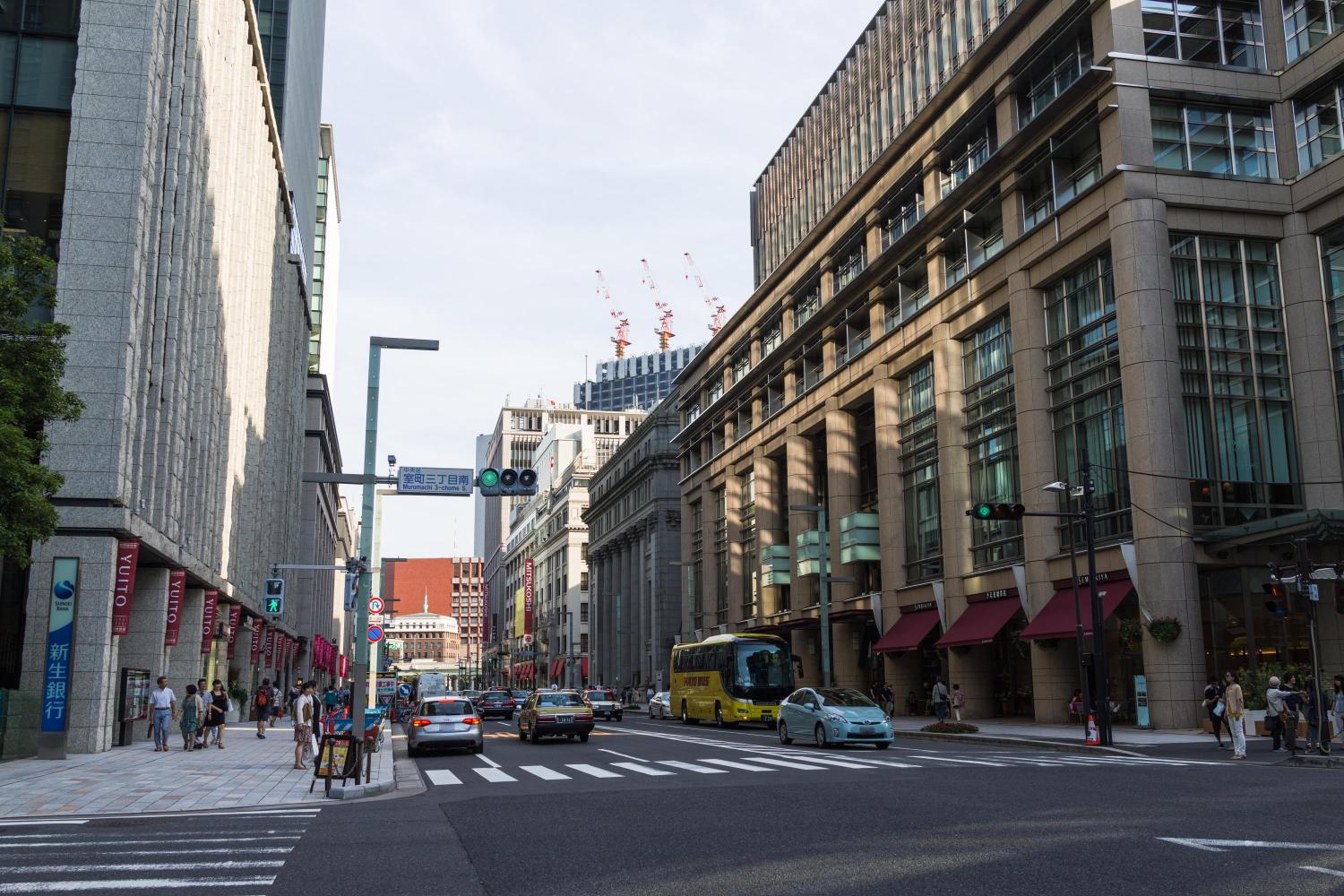 Nihonbashi is an area around Nihonbashi Bridge over the Nihonbashi River, which is located to northeast of Tokyo Station. It has developed as the center of commerce since the Edo period (1603 - 1868) and even today there are a lot of commercial facilities such as old department stores (Mitsukoshi, Takashimaya, etc.) and COREDO Muromachi, which opened in 2010. One of the area’s attractiveness is many old stores such as Ninben, Yamatoya (dried bonito stores), Yamamotoyama (a laver store) and Eitaro (a Japanese confectioner). Also the area is the financial center because the central branch of the Bank of Japan, the central bank of Japan and the Tokyo Stock Exchange are located there. There remain modern architectures that were built in the early 20th century and main attractions are Nihonbashi Bridge, Takashimaya Nihonbashi store, Mitsukoshi Nihonbashi main store, Mitsui Main Building, the central branch of the Bank of Japan, COREDO Muromachi and Fukutoku Shrine. Many of attractions are located along Chuo Dori Street. 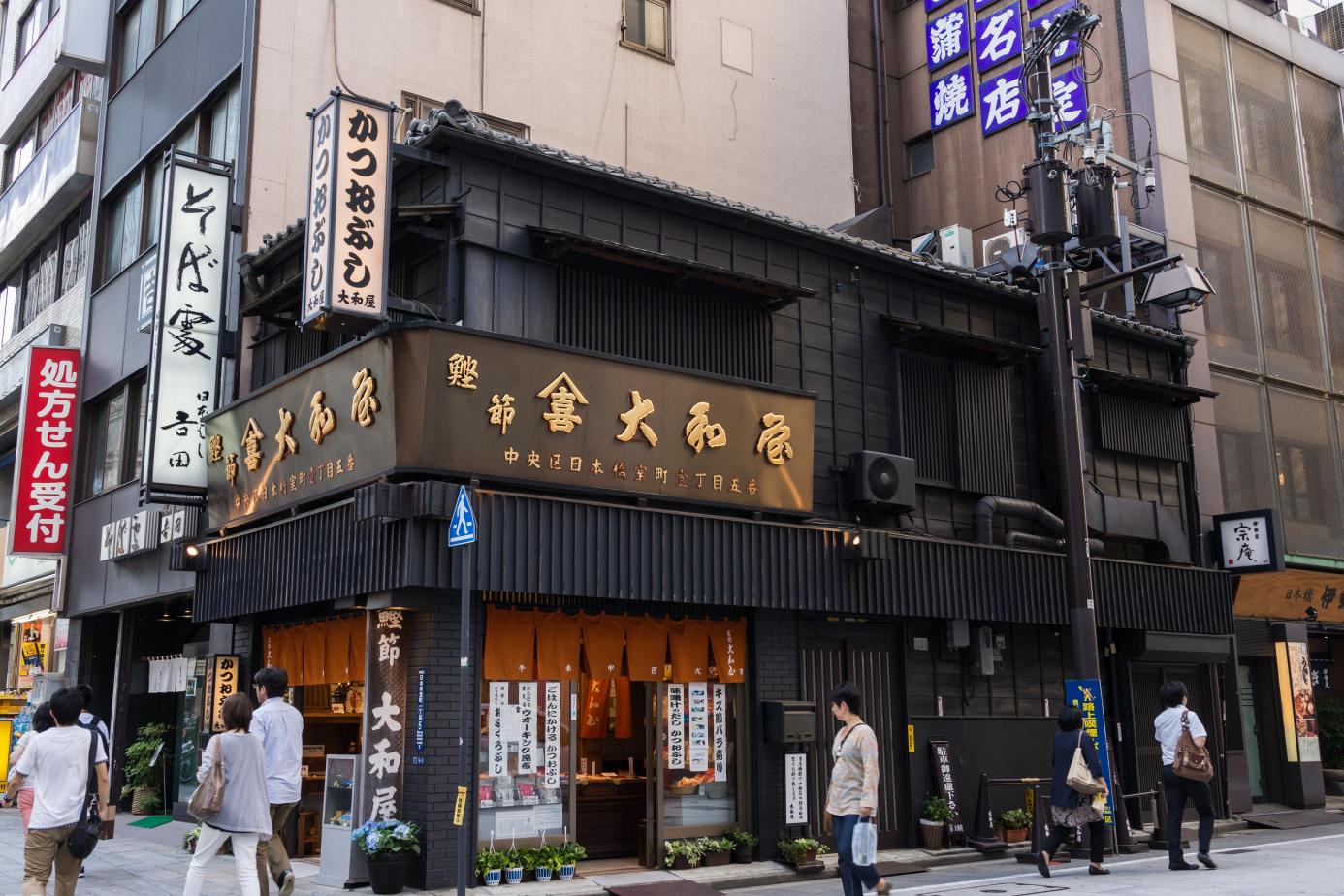 Nihonbashi had been a wetland near the sea when Ieyasu TOKUGAWA moved to Edo (present-day Tokyo) in 1590. After he established Edo Bakufu (Shogunate government) in 1603, the wetland began to be reclaimed and Nihonbashi town was completed in about 1605. As for Nihonbashi Bridge over the Nihonbashi River, the original one made of wood was built in 1603. The bridge was determined as the base point of five land traffic routes of the Edo period and after that the area nearby became the most prosperous place in Edo. The scenes of the bridge and the town were often drawn in ukiyo-e (Japanese wood-block paintings). In the early 17th century a riverside fish market was formed on the east of the north end of the bridge. It had supported food distribution in Edo for 300 years until it was destroyed by the Great Kanto Earthquake and moved to Tsukiji in 1923. It is the reason why there are many stores related to marine products in Nihonbashi. In addition, Kimono (Japanese traditional clothing) shops that became department stores later were established in Nihonobashi in the Edo period. Shirokiya (present-day Tokyu Department Store) was founded in 1662, Mitsui Echigoya (present-day Mitsukoshi) in 1673 and Daimaruya (present-day Daimaru) in 1743. Furthermore a mint issuing gold coins called Kinza was established in 1595 and Nihonbashi was developed as the financial center.

Nihonbashi continued to develop as the center of commerce and finance as well as from the Meiji period (1868 - 1912). The Bank of Japan, the central bank of Japan was established at the site of Kinza in 1896. Mitsui Echigoya was renamed as Mitsukoshi and started a business as a department store in 1905, and after that modern department stores spread in Nihinbashi and also entire Japan. After the 20th century many modern architectures such as Takashimaya Nihonbashi store, Mitsukoshi Nihonbashi main store and Mitsui Main Building were built there. The present Nihinbashi Bridge was also built in 1911. Nihonbashi was seriously damaged by the Great Kanto Earthquake in 1923 and a riverside fish market was moved to Tsukiji during the restoration process. Nihonbashi was also damaged by the air raid during the World War II, but it developed again as the center of commerce and finance after the war. It was 1964 when the scenery of Nihonbashi was dramatically changed. An expressway was constructed on the Nihonbashi River for the Tokyo Olympic Games. Due to this, the scenic bridge, Nihonbashi Bridge has been covered.

As a shopping district Nihonbashi once declined in the 1990s after the collapse of the bubble economy, but it has been thriving again by redevelopment projects in recent years. Town development by taking advantage of its history and tradition has been underway. For example Fukutoku Shrine, which was once located on the roof of a building, was moved to the space generated by the redevelopment and it becomes a new landmark of the town. 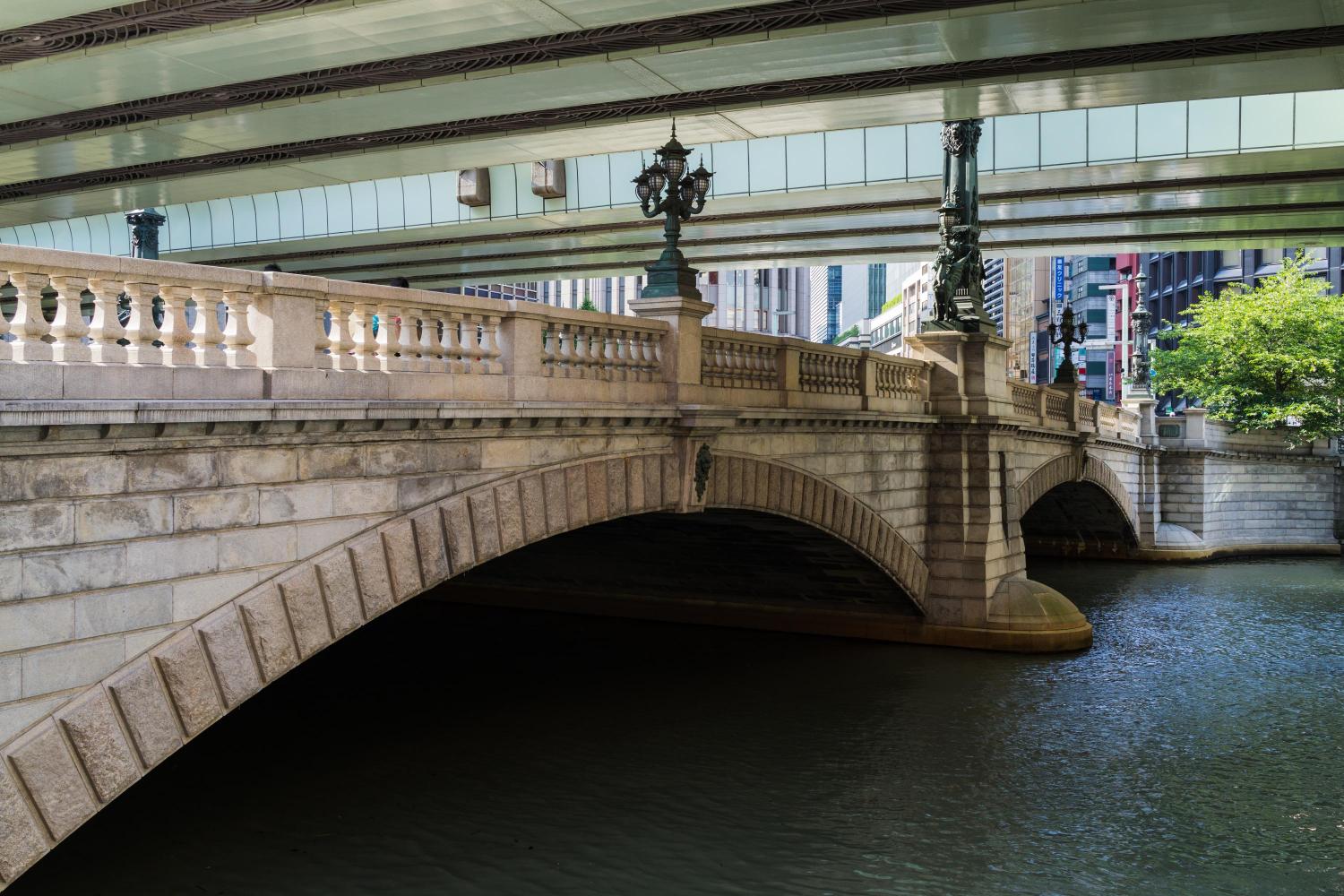 Nihonbashi Bridge is a Renaissance style stone bridge over the Nihonbashi River, which was built in 1911. The present bridge is the 20th. It features Japanese style decorations such as statues of qilin (legendary Chinese animal) and lion though it is modeled on a western style stone bridge. It has massiveness and is worth seeing. Unfortunately an expressway was constructed over the bridge after the World War and has spoiled the scenery. The road-origin marker of Japan is known to be on the bridge. 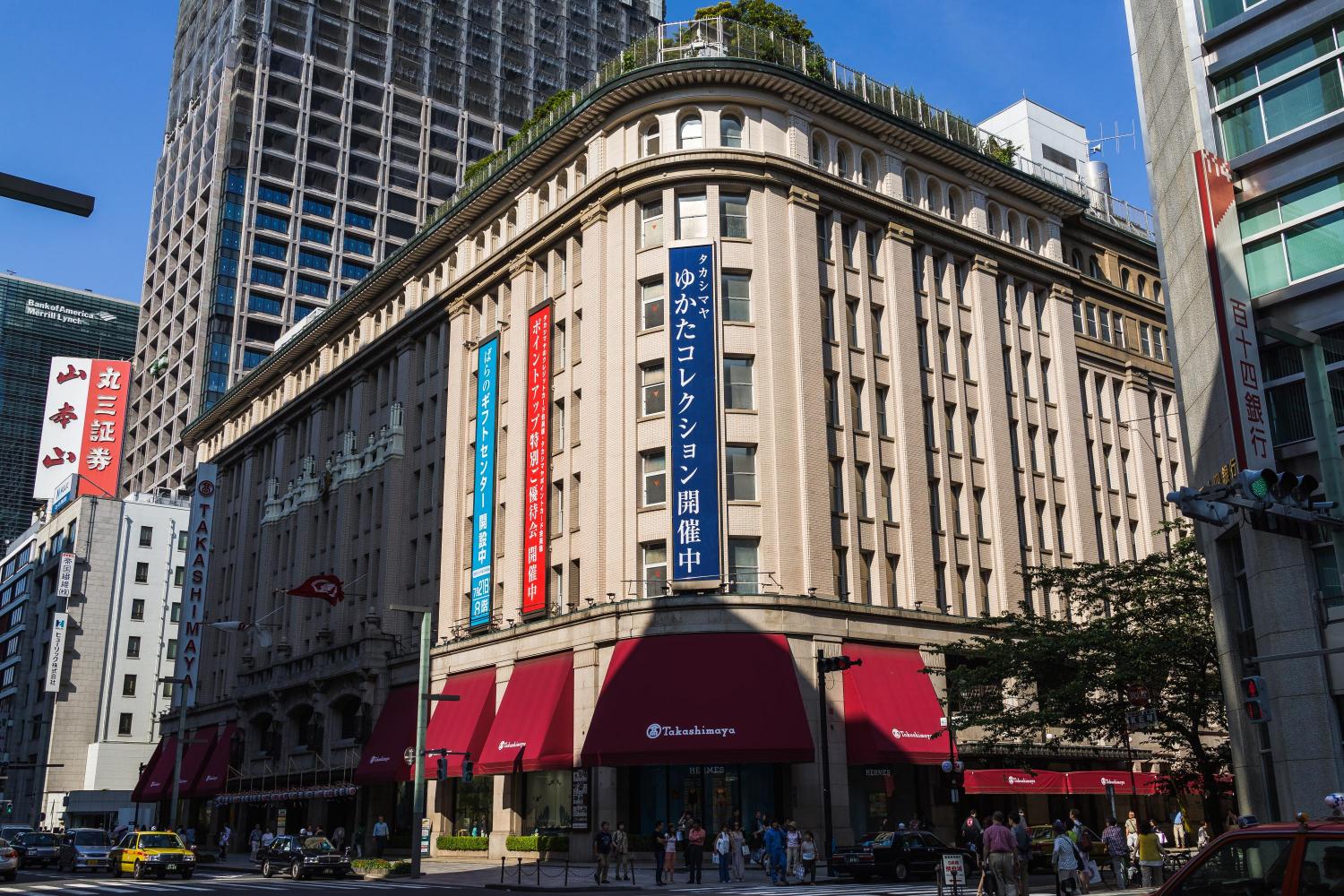 Takashimaya Nihonbashi store was designed by Teitaro TAKAHASHI and completed in 1933. After the World War it was extended by Togo MURANO. It is the only department store designated as a national important cultural property. Based on Renaissance style it incorporates Japanese design elements throughout. It has appearance of depth and it is interesting to watch it. 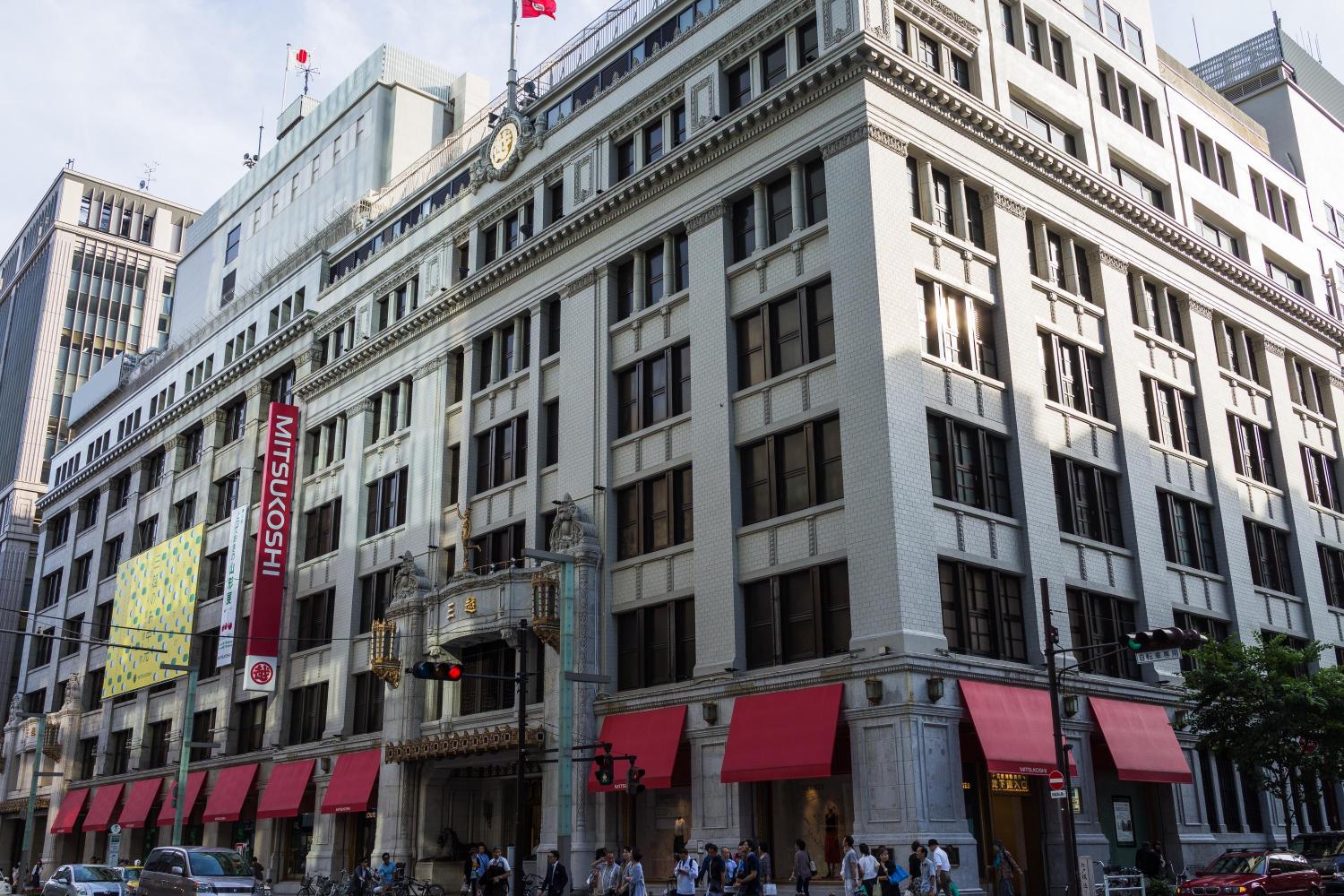 Mitsukoshi Nihonbashi main store was built in 1914 and had extended after that and the present form was completed in 1935. The latest technologies at the time were used, for example the first escalator in Japan was installed. The Renaissance style white brick building was said to be the largest building in the areas to the east of the Suez Canal. The statues of lion at the front entrance were modeled on those in Trafalgar Square in London. They are familiar to people as the symbol of Mitsukoshi. The statue of Tennyo (heavenly maiden) on the first floor of the main building is also famous. 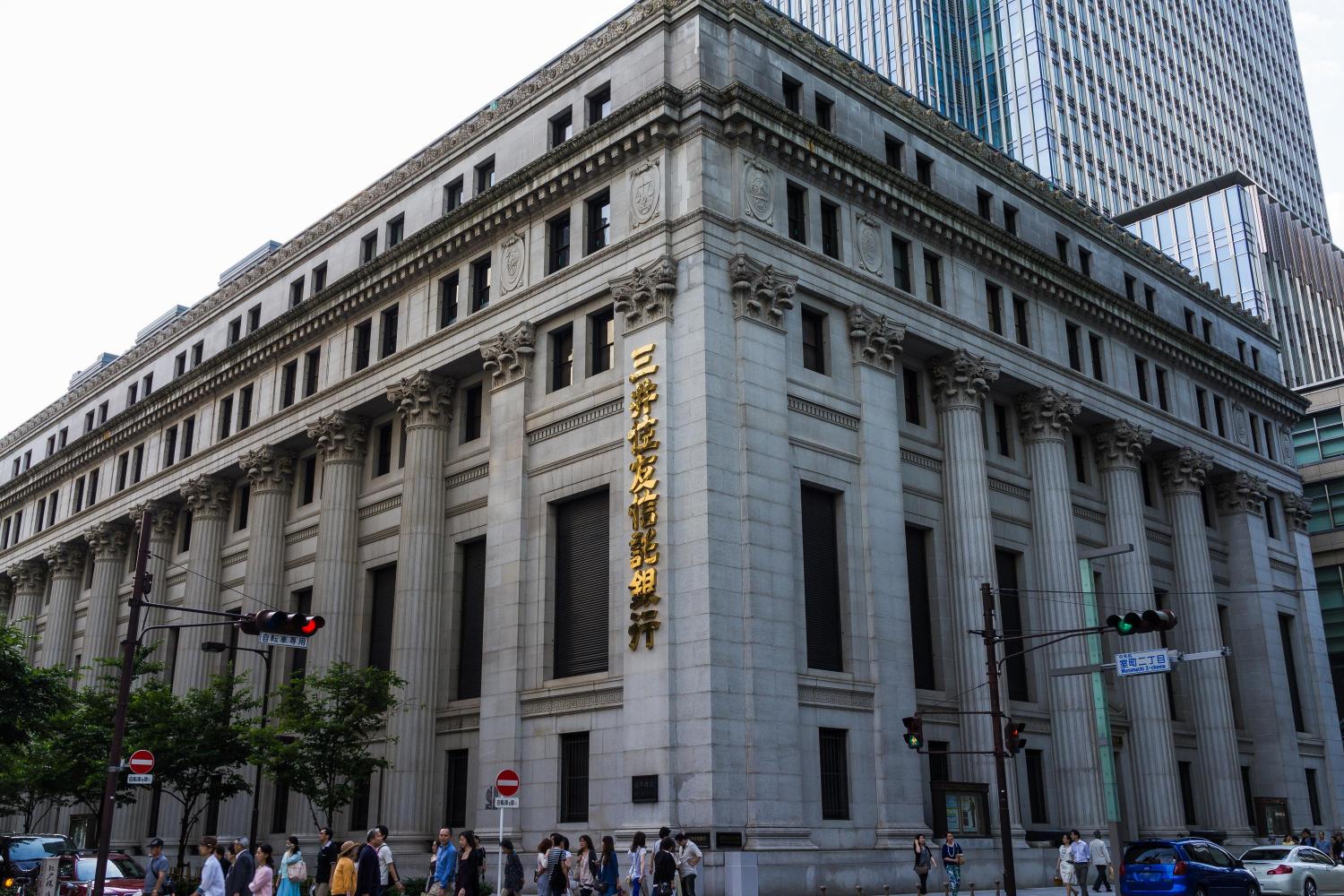 Mitsui Main Building was built in 1929 as the head office of Mitsui Zaibatsu (company syndicate). It is a neoclassical style splendid building, which features Corinthian colonnades. It is designated as a national important cultural property. Even today it is used for banks and offices of the Mitsui Group companies. In “Hanzawa Naoki”, which was popular in 2013, it is known to appear as the headquarters of “Tokyo Central Bank”, which the main character works at.

The central branch of the Bank of Japan 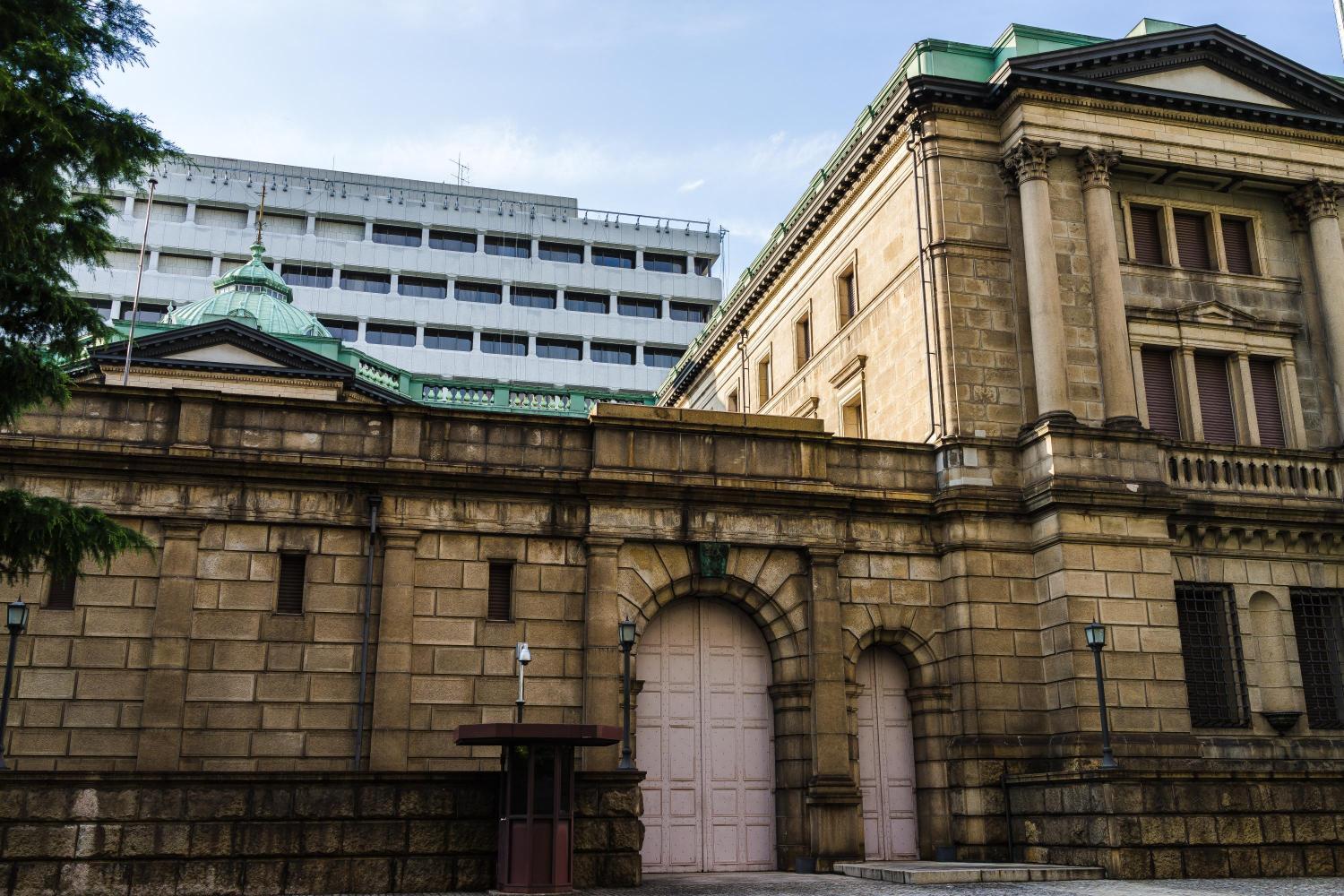 The central branch of the Bank of Japan

The central branch of the Bank of Japan was designed by Kingo TATSUNO as well as Tokyo Station and completed in 1896. It is modeled on the National Bank of Belgium. It is a neo-baroque style building and its exterior wall finished by stone pitching makes a profound impression. It is designated as a national important cultural property. An English guided tour is organized every Tuesday.
http://www.boj.or.jp/en/about/services/kengaku.htm/

The headquarter of Nomura Securities 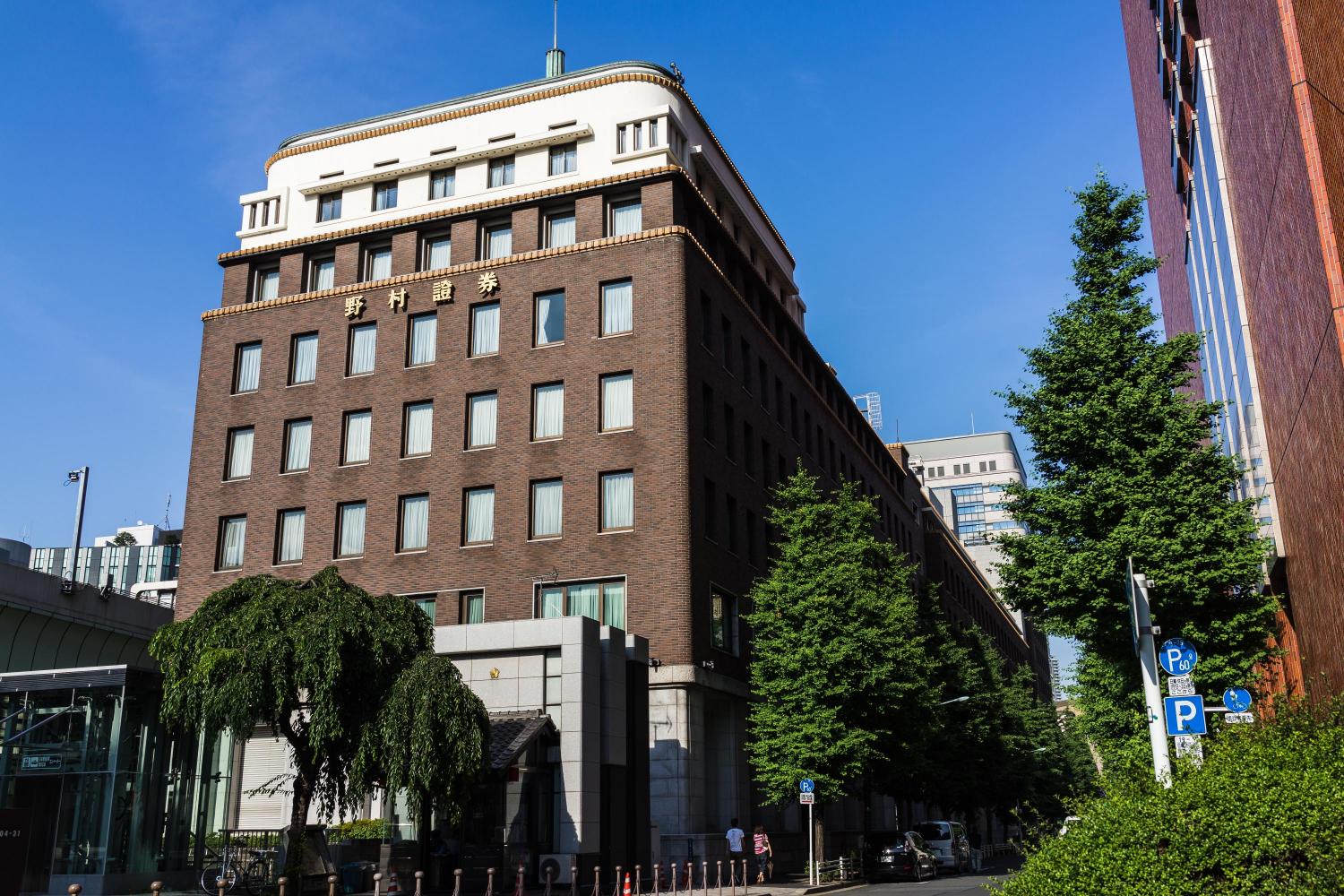 The headquarter of Nomura Securities

The headquarter of Nomura Securities along the Nihonbashi River has a simple appearance but a unique presence. It is modernism architecture, which was designed by Takeo YASUI and completed in 1930. 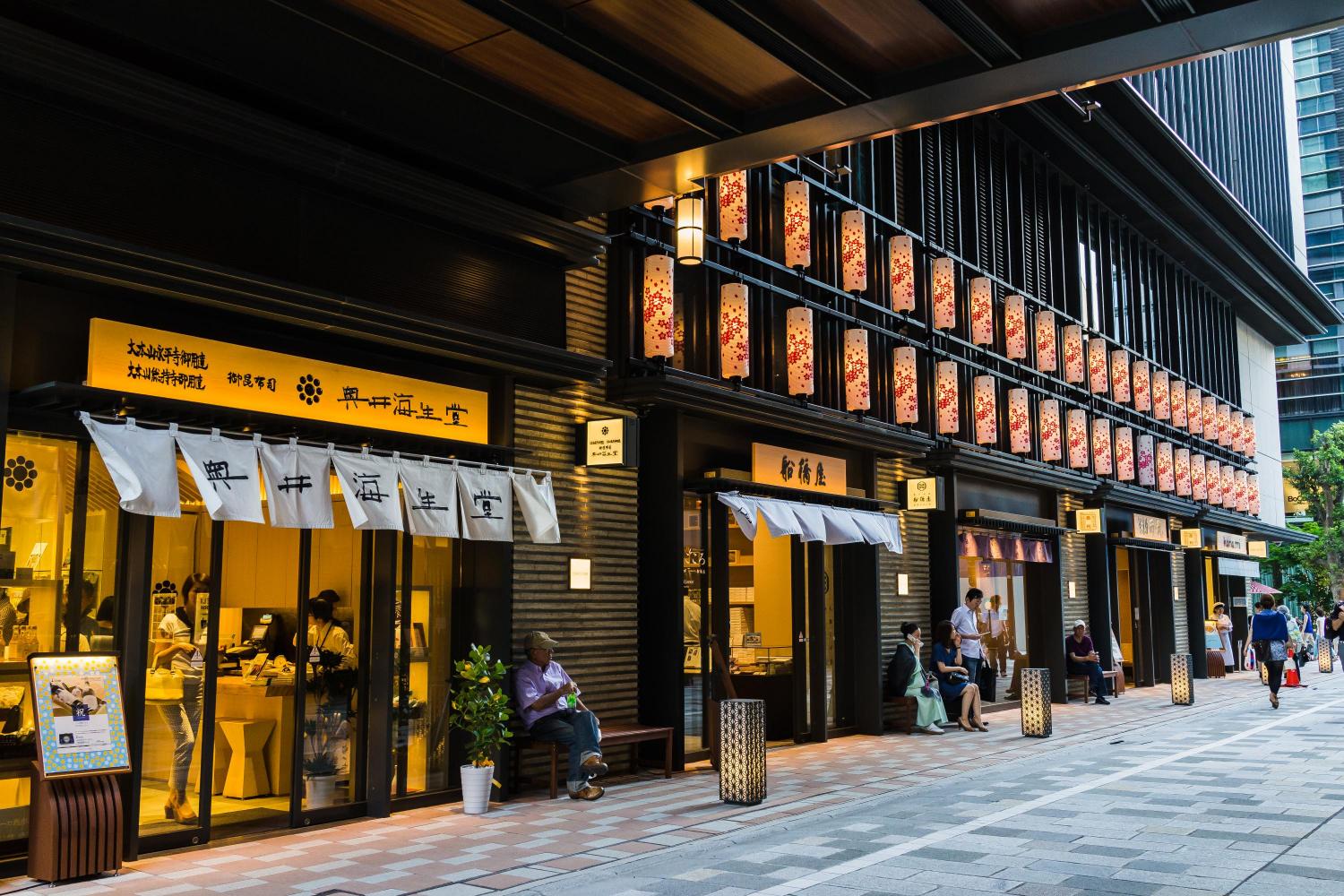 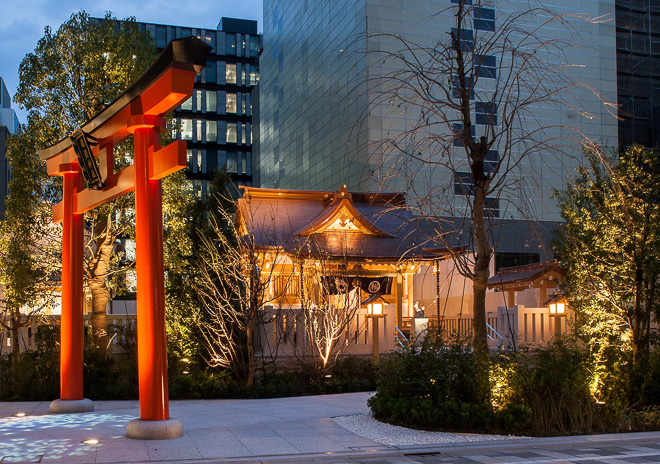 Fukutoku Shrine is located on the north of COREDO Muromachi 2 and also called Mebuki Shrine. It has a long history, which is said to be established in the late 9th century. Ieyasu TOKUGAWA, the first shogun of the Edo bakufu and Hidetada TOKUGAWA, the second visited the shrine. The site of the shrine has changed over time and it was once located on the roof of a building. But when COREDO Muromachi was developed the new shrine building was constructed at the present site as the center of the town’s prosperity. The sacred grove of the shrine will be developed at the adjoining site in 2016. The shrine attracts attention as a new symbol of Nihonbashi.

Nihonbashi has flourished since the Edo period. It is an attractive town, which has not only old stores and historic buildings but also new spots such as COREDO Muromachi and Fukutoku Shrine. Why don’t you visit there?