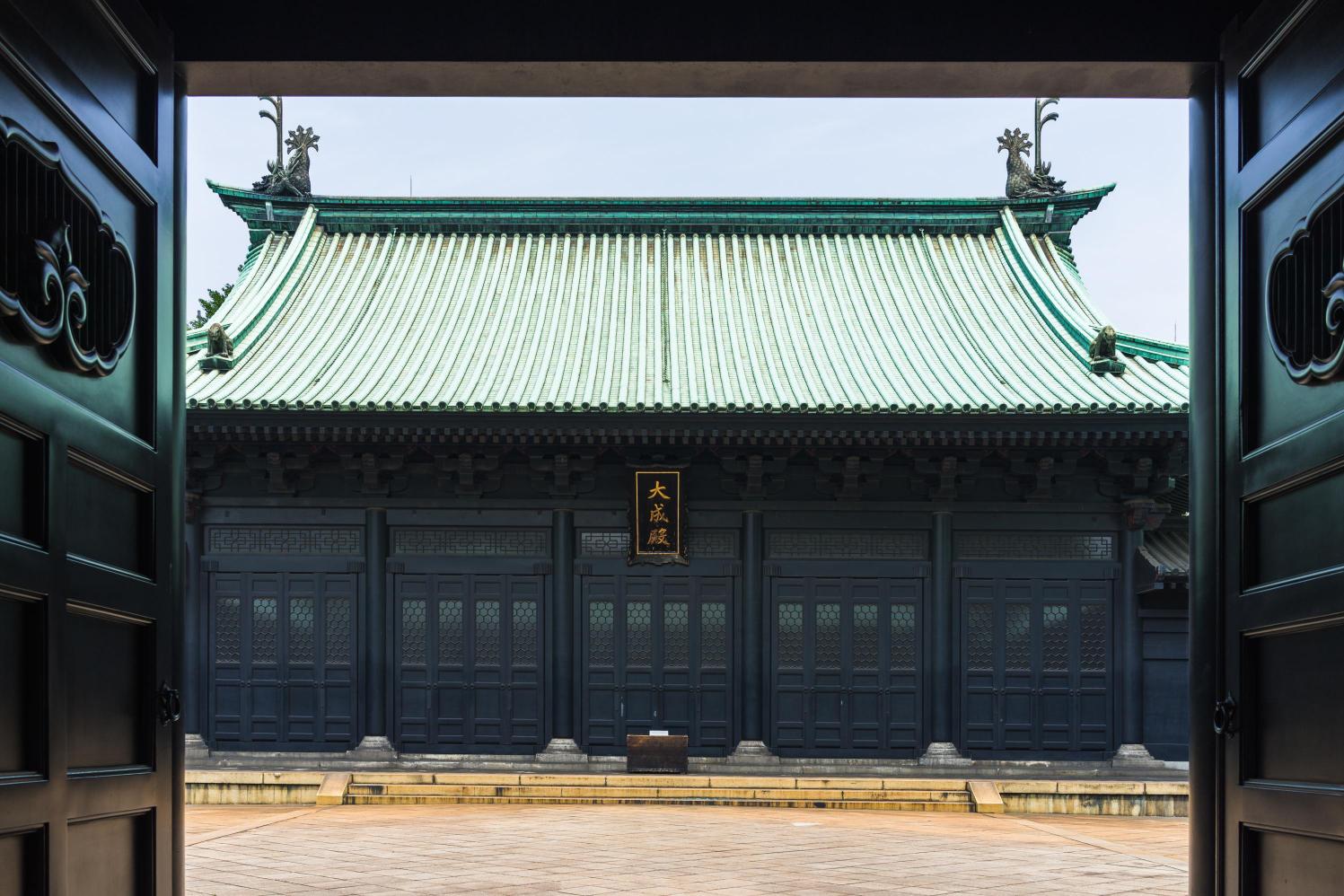 Yushima Seido (Sacred Hall at Yushima) is a mausoleum enshrining Confucius, the founders of Confucianism in China, and located near Ochanomizu station and Akihabara station. It has a long history since the Edo period (1603 - 1868) and there are black lacquered buildings such as Taiseiden, Kyodanmon Gate and Nyutokumon Gate, which are rare and worth seeing. The site has rich greenery and a relaxing atmosphere. Also Tsukijibei (roofed mud walls) surrounding the site is tastefully and creates wonderful scenery. 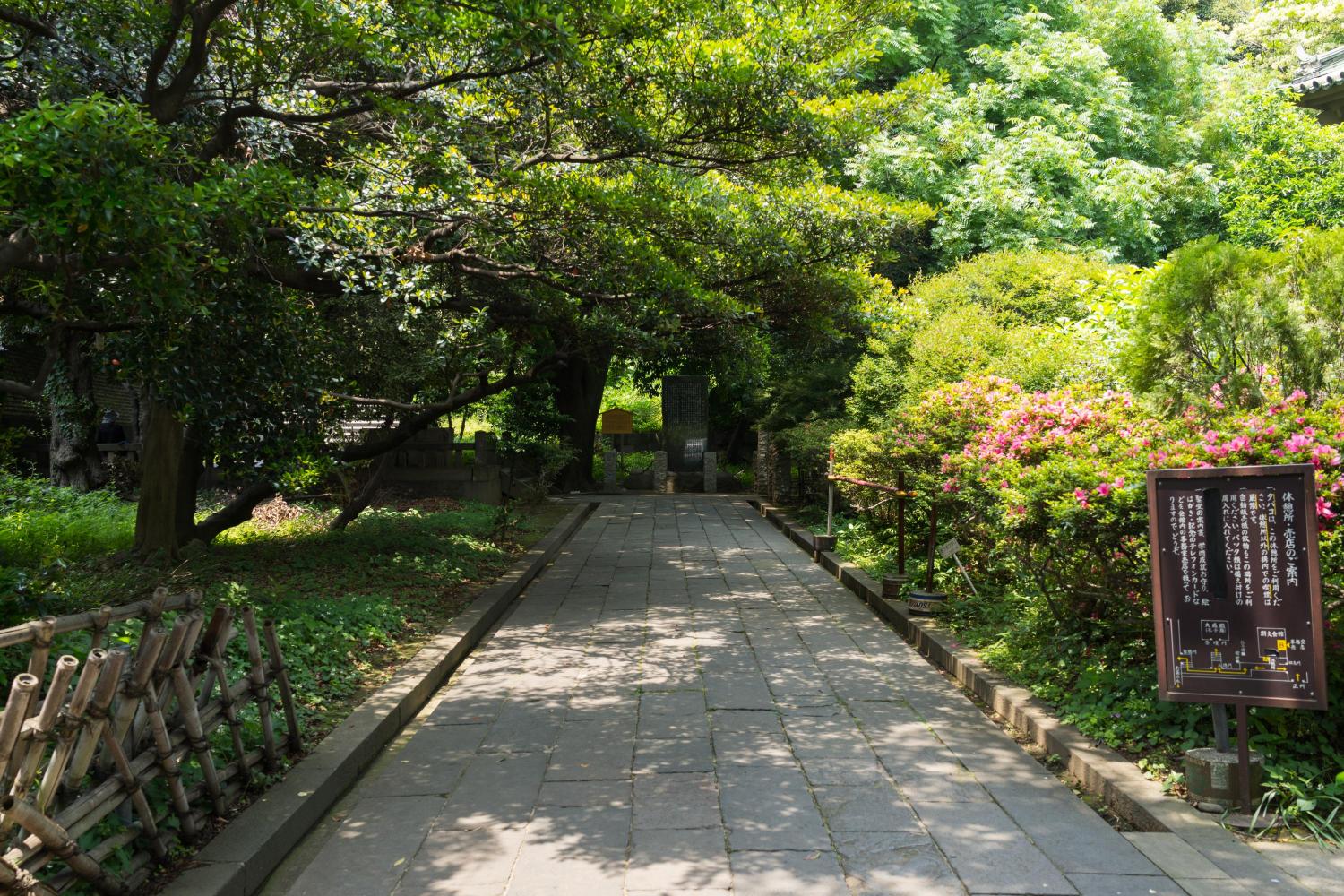 Rich greenery in the site 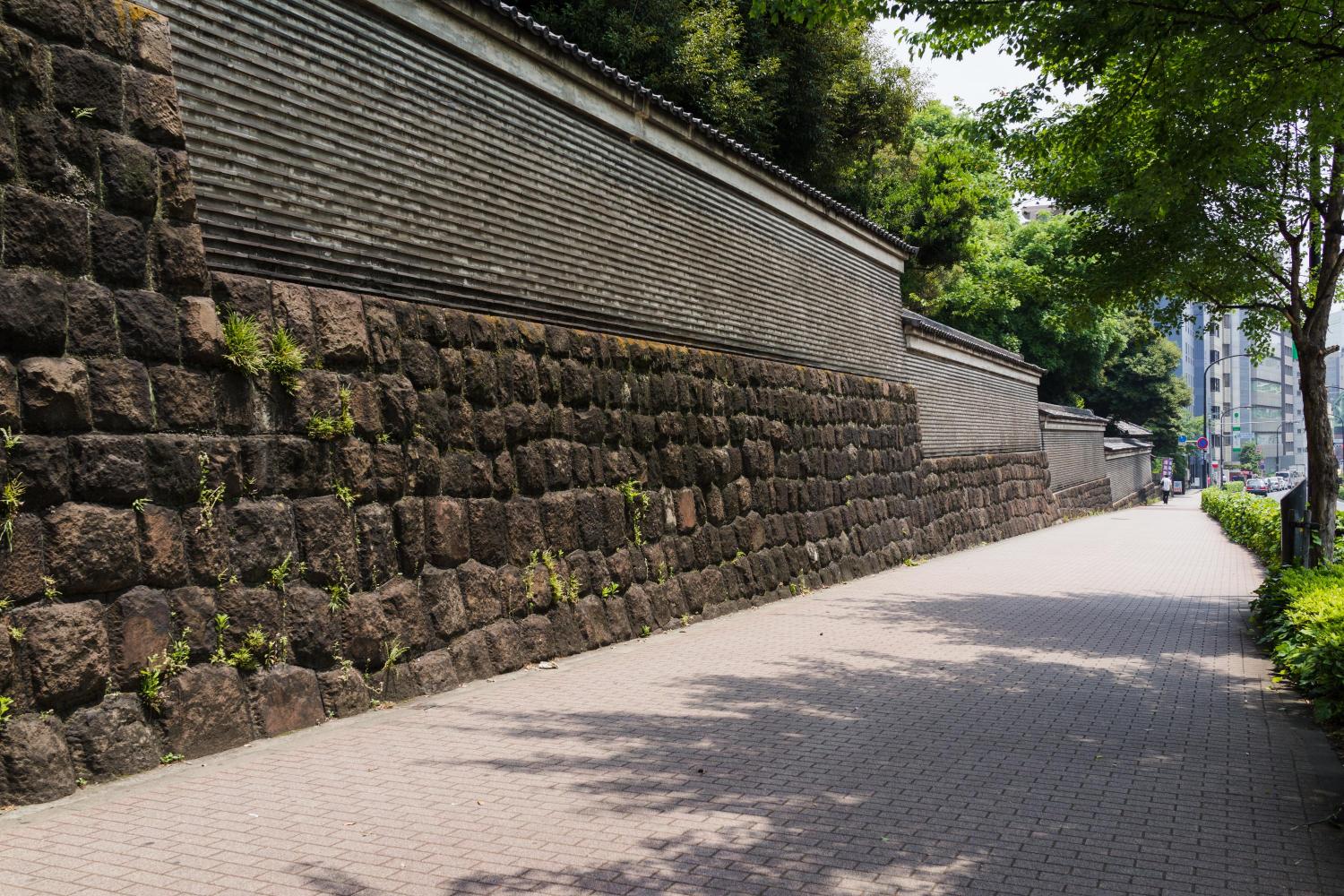 Yushima Seido was established by Tsunayoshi TOKUGAWA in 1690. It was built with a school based on the principles of Confucianism. During the Edo period Confucianism became popular especially among samurais, the governing class of the time. Though the mausoleum and the school were originally located at the private residence of the Hayashi family, a Confucian scholar family serving the Edo bakufu (the Shogunate government), in present-day Ueno Park, they were moved to the site at that time. After that Yushima Seido was declining in a certain period, but in 1797 Shoheizaka Gakumonjo (Shoheizaka School), which was under the direct control of the Edo bakufu, was established at the site. Shohei is the name of the village where Confucius was born. In 1799 the buildings were reconstructed and Taiseiden (the main hall enshrining Confucius) was expanded. The site was also expanded to a large area including present-day Tokyo Medical and Dental University. After that the school attracted many talents and grew flourishing until the end of the Edo period. Though it was closed in 1871 after it was taken over from the Edo Bakufu to the Meiji government, Tokyo University established in 1977 is placed in the line of it. After the Meiji period (1868 - 1912) there were once the following facilities at the site; the Ministry of Education, the National Museum (the present-day Tokyo National Museum and National Museum of Nature and Science), Tokyo Normal School (present-day Tsukuba University), Tokyo Women's Normal School (present-day Ochanomizu University), but they were moved gradually. Today there are Yushima Seido and Tokyo Medical and Dental University at the site. Yushima Seido was designated as a National Historic Site in 1922. By the way public lectures mainly concerning Chinese classical literature are conducted at the Shibun Hall even now. 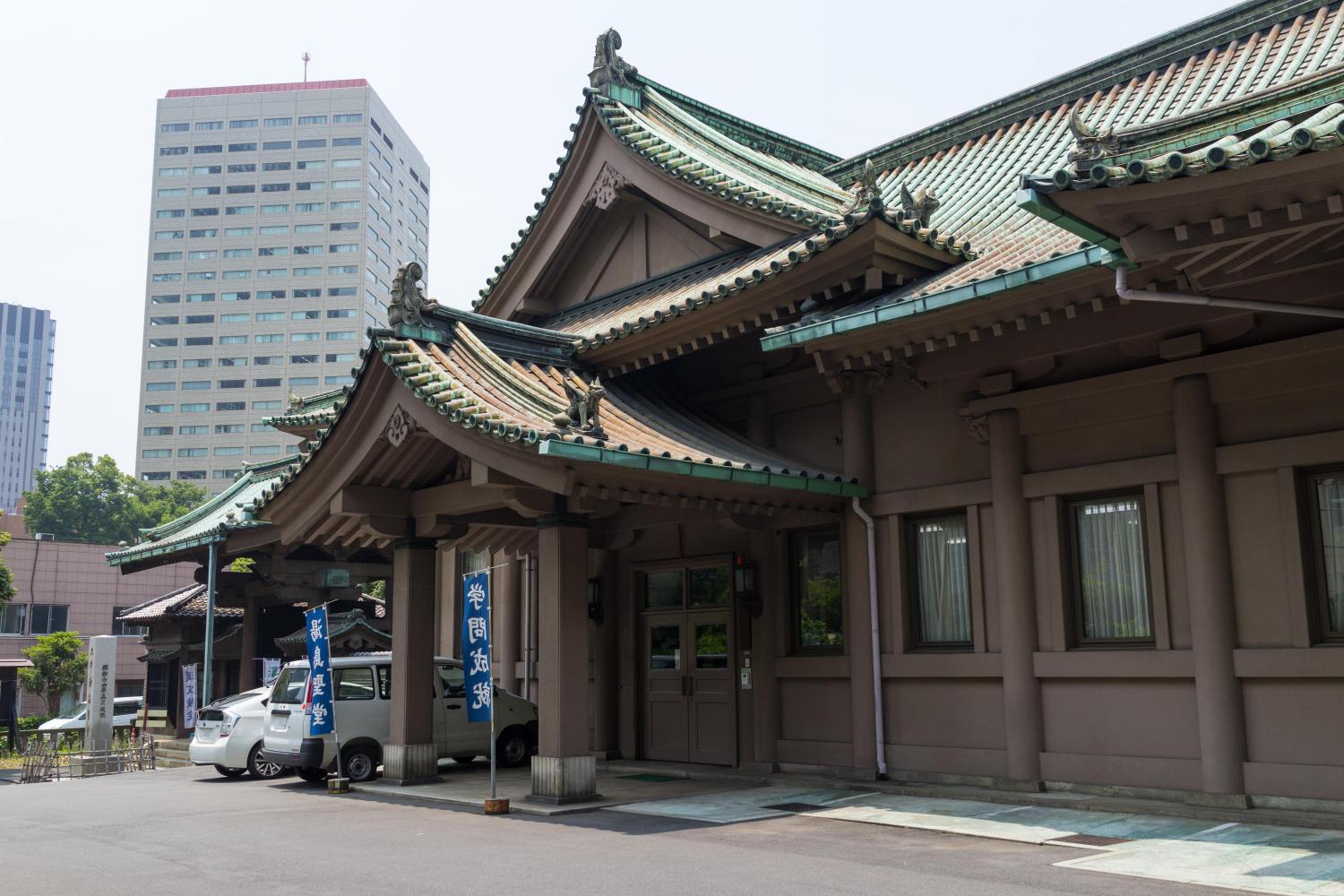 The main buildings of Yushima Seido are Taiseiden, Kyodanmon Gate, Nyutokumon Gate, etc. These buildings are black lacquered and have a lot of impact, so they are worth seeing. The buildings built in the Edo period were burnt down in the Great Kanto Earthquake of 1923 except for Nyutokumon Gate and the washstand for worshipers. In 1935 the burned-out buildings were rebuilt with not wood but reinforced concrete to be proof against a fire and an earthquake, and at the same time based on the buildings when Shoheizaka Gakumonjo was opened. 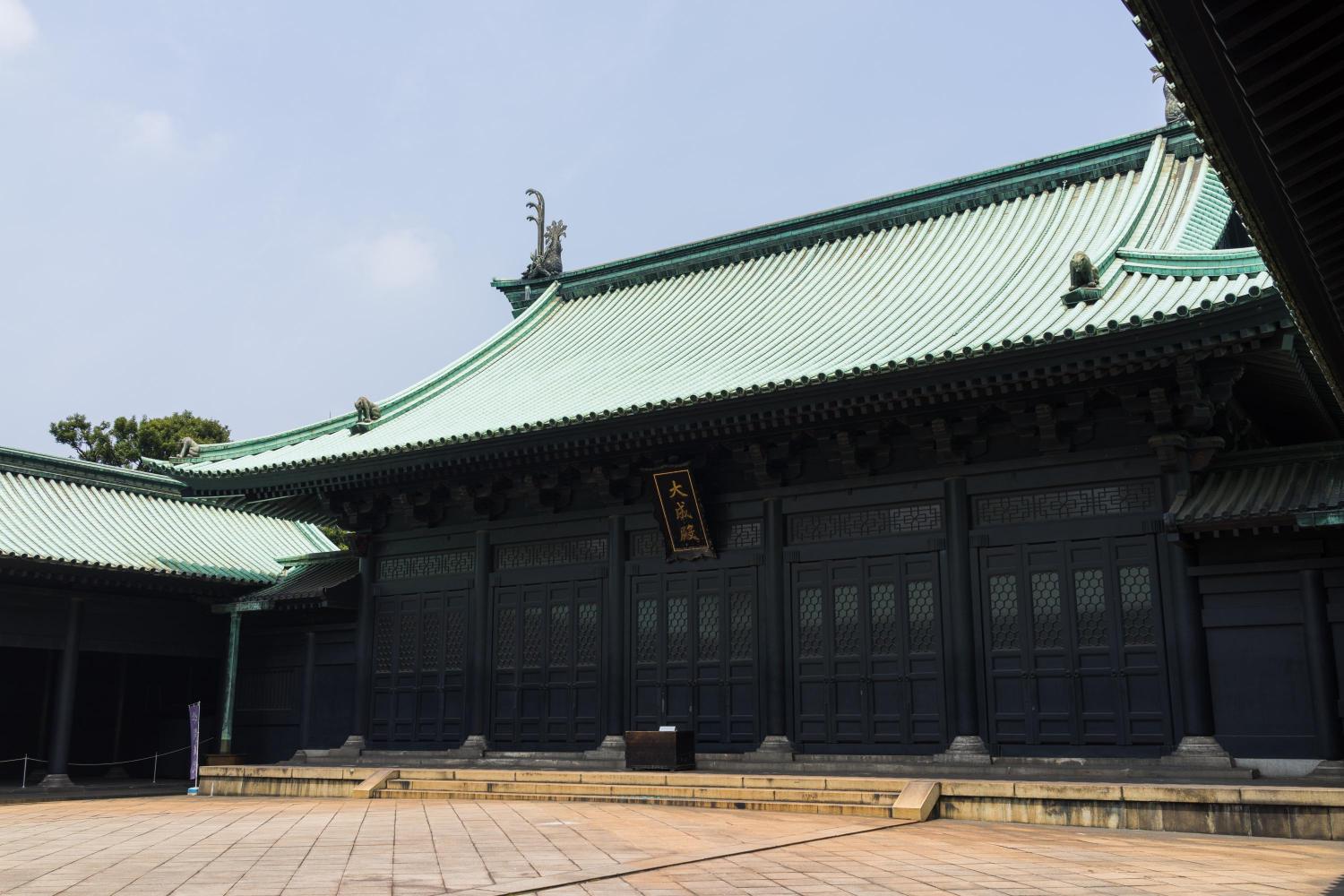 Taiseiden is an Irimoya style building, which is about 20 meters long. Not only a statue of Confucius but also those of four wise men; Mencius, Yan Hui, Zengzi and Zisi are enshrined. The statue of Confucius is one that Zhu Zhiyu, a vassal of the Ming dynasty in China, curried when he went into exile to Japan in 1659. 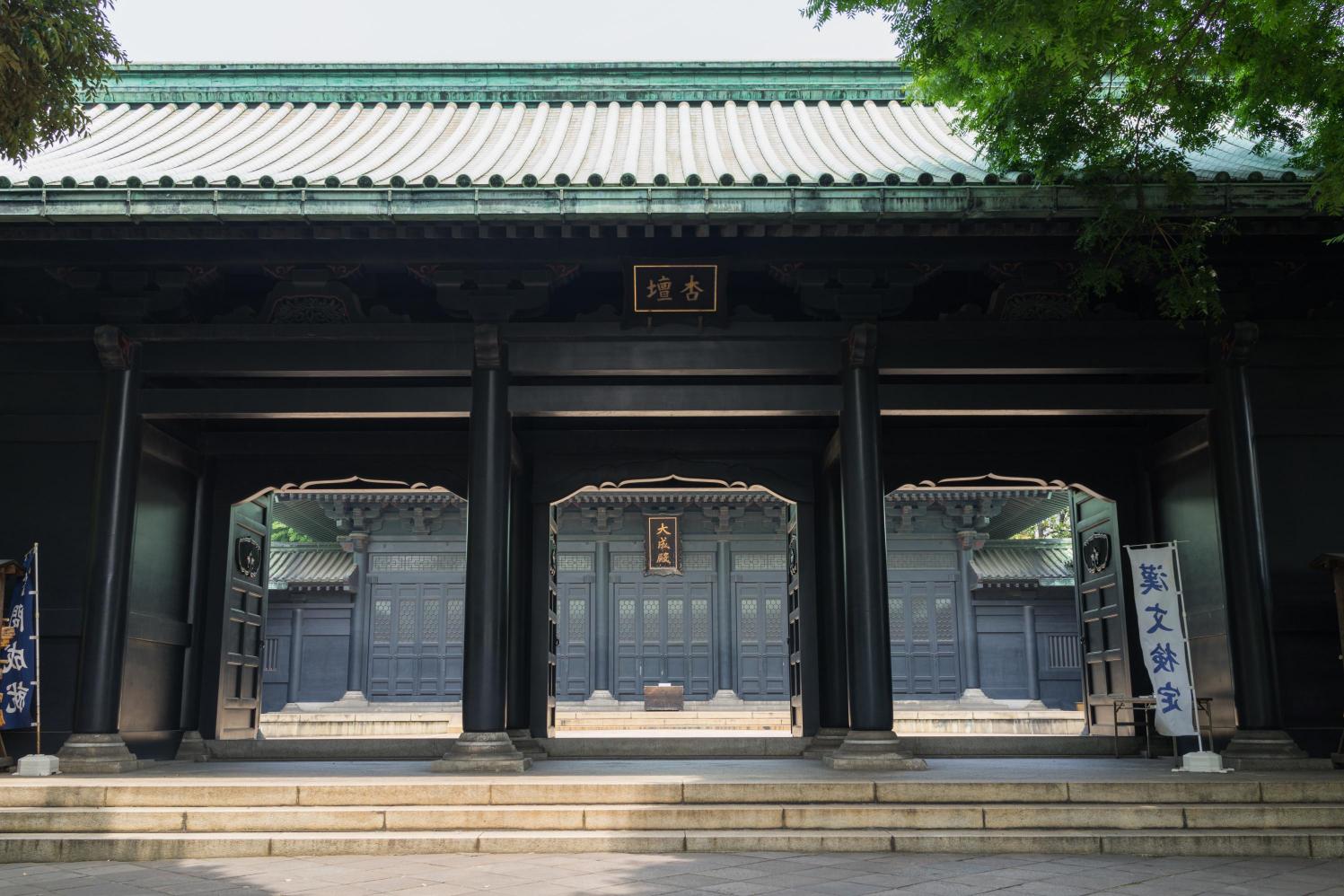 Kyodanmon Gate is an Irimoya style gate located in the front of Taiseiden and at the top of the stone steps from Nyutokumon Gate. It and Taiseiden that can be seen through the gateposts create a wonderful view. 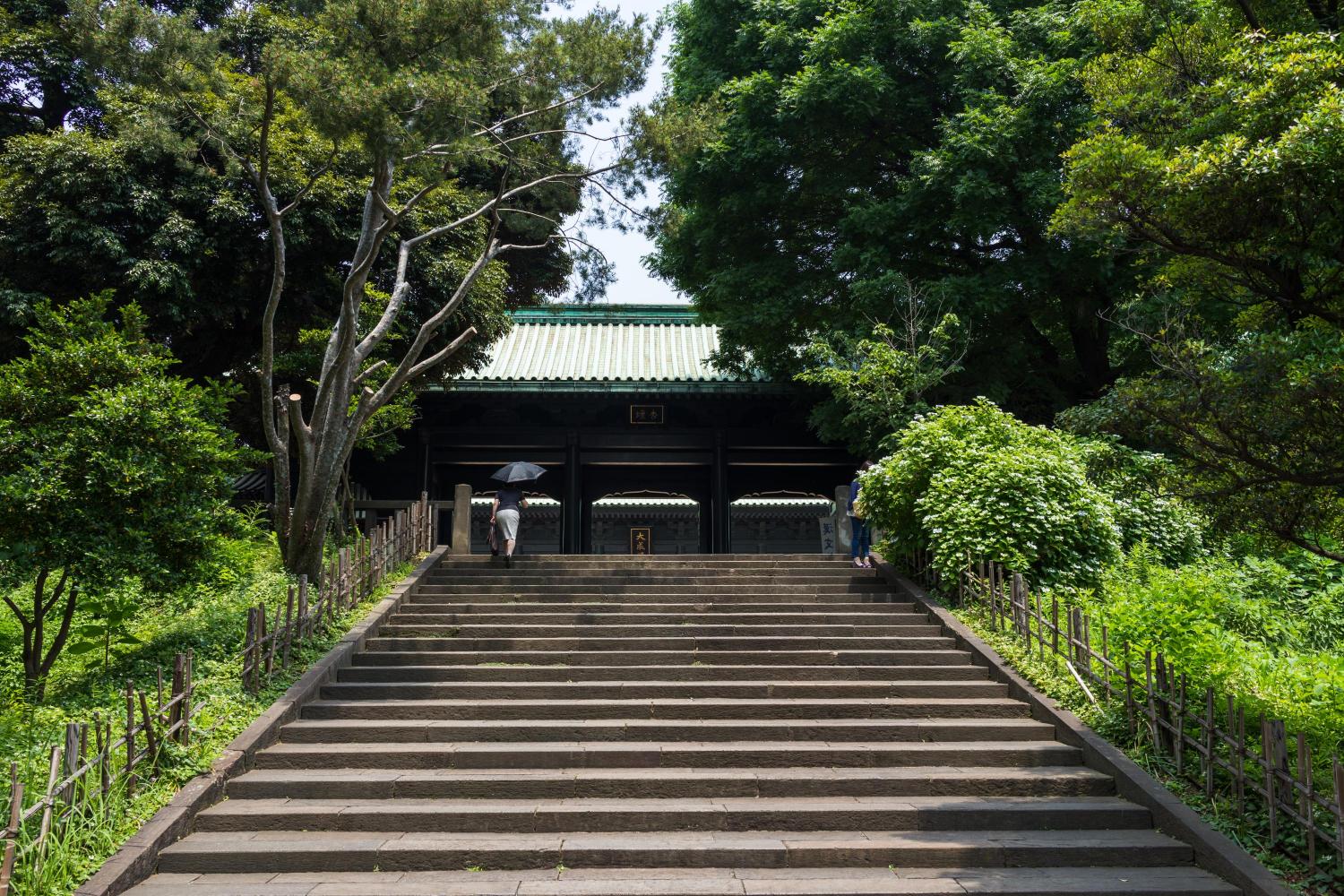 The stone steps and Kyodanmon Gate 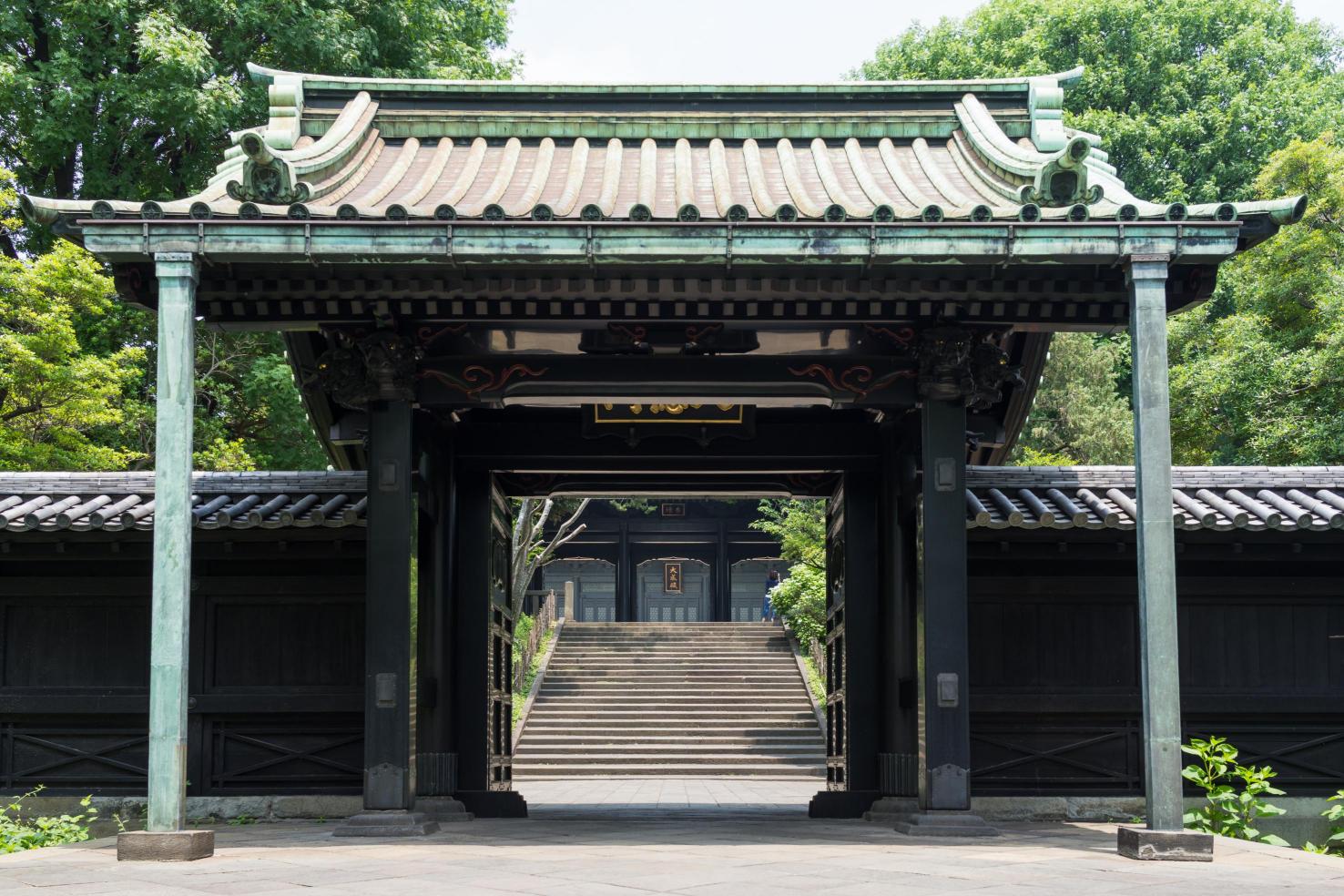 Nyutokumon Gate is the only existing wooden building and a Kirizuma style gate. It was built in 1704 and survived the Great Kanto Earthquake. From the gate you can see the stone steps, Kyodanmon Gate and Taiseiden, and it is a fine view. Incidentally, Nyutokumon Gate is not located in an ordinary Confucius's mausoleum and it is considered as an original gate in Japan. 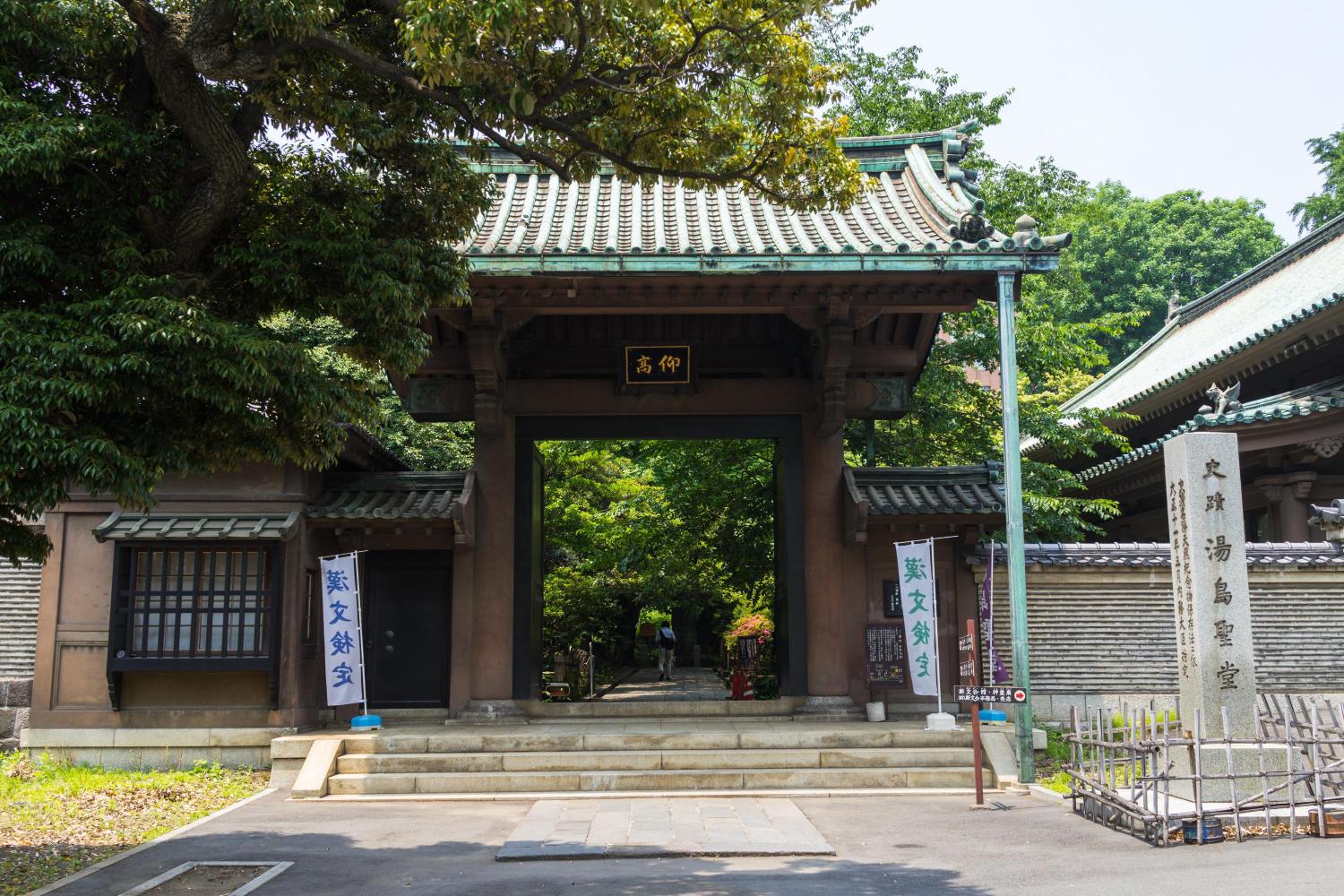 Gyokomon Gate is a Kirizuma style gate and the main entrance of Yushima Seido. 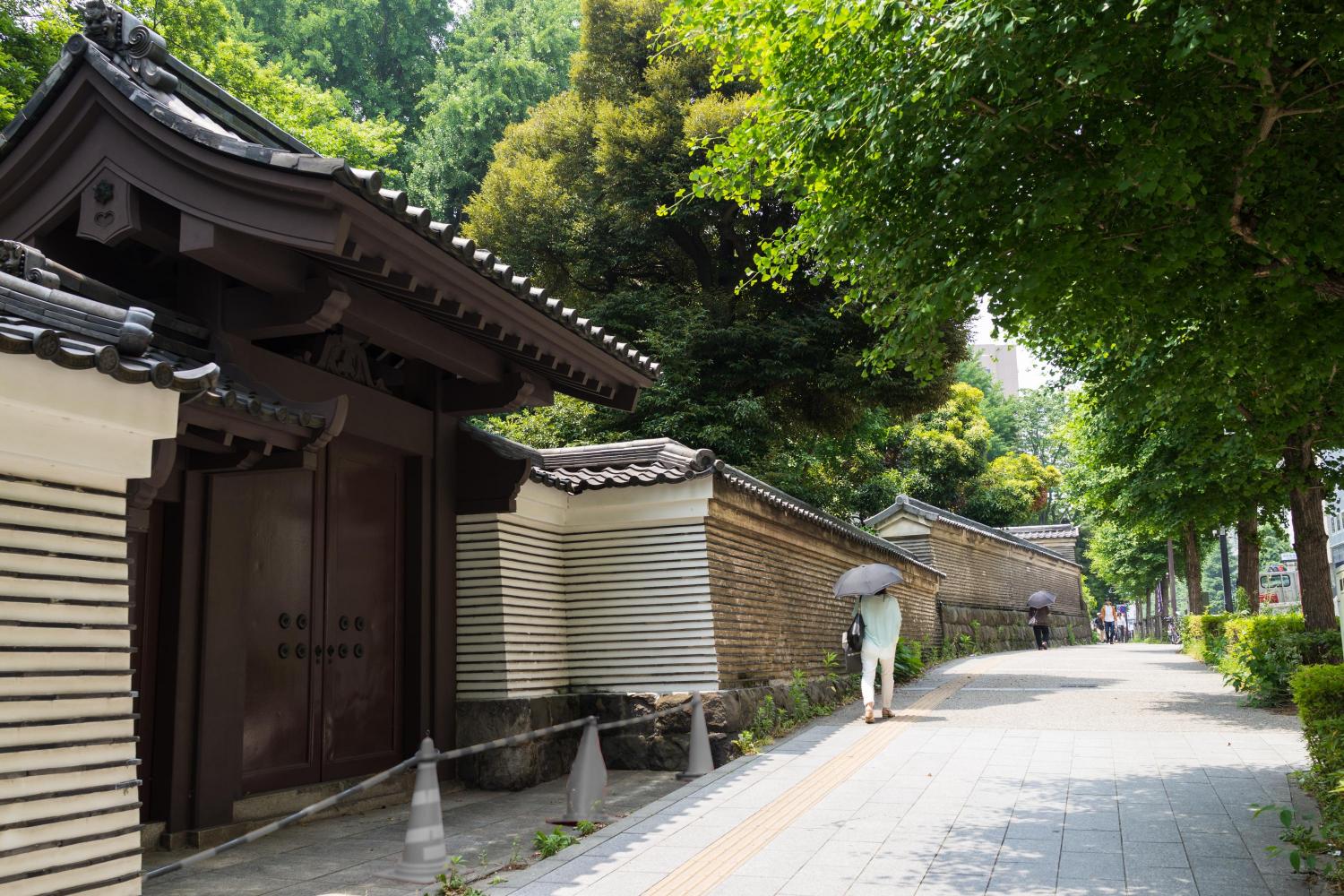 Also there is Myojinmon Gate, which is a Kirizuma style gate, on the north side of the site (by Kanda Myojin Shrine). With Tsukijibei (roofed mud walls) it creates tastefully scenery. 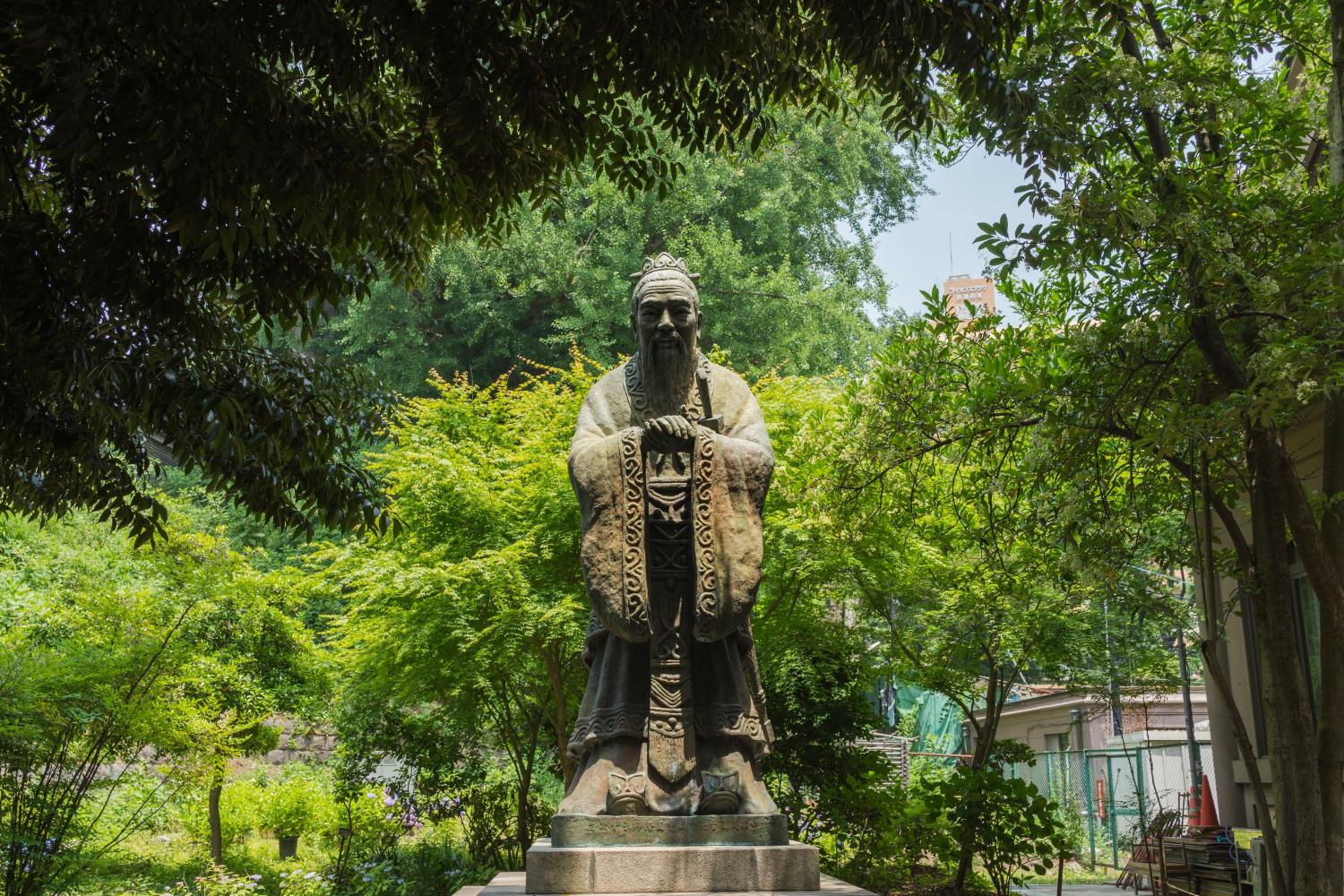 The bronze statue of Confucius

A bronze statue of Confucius standing near Gyokomon Gate is the largest one in the world, which is about 4.6 meters tall and weighs about 1.5 tons. It was donated from Taipei City Lions Club of Taiwan in 1975.

Yushima Seido is one of the places I recommend strongly. Why don’t you visit there with Kanda Myojin Shrine nearby?