Kanda: a town of common people since the Edo period

Gado-shita (below the girder) near Kanda station

I would like to introduce the area around Kanda station and Kandasudacho on this article. Kanda is located to the northeast of the Imperial Palace and adjacent to Akihabara and Ochanomizu. The main attractions are Sudacho old restaurant area, Maach Ecute Kanda Manseibashi (the former Manseibashi Station), Drinking area in the front of Kanda station, and Kanda station west exit shopping street. Kanda is famous for soba (buckwheat noodles) and there are some old soba restaurants in the area. I introduce mainly the area surrounded by the Kanda River (north side), JR Yamanote line (east side), the Nihonbashi River (south side) and Sotobori Street (west side), though there are many of the place names that include the word “Kanda” in a wide area including Ochanomizu and Akihabara.

In the Edo period (1603 - 1868), Kanda attracted merchants and craftsmen, and flourished so much. A big vegetable market was also located there. During the period soba became popular with common people in mainly Edo (present Tokyo). Even now many soba restaurants are opened around Kanda. By the way the Kanda River that flows on the north side of Kanda is an artificial river, which Mt. Kanda was excavated to form in the Edo period. After Manseibashi station on the Kobu Railway line (the present Chuo Main line) was opened as a terminal station at the present Kandasudacho in 1912, Kanda reached the height of its prosperity. The station building was a splendid red brick one designed by Kingo TATSUNO who also designed Tokyo Station. The Streetcars of Tokyo City were also extended to the front of the station, so the area was crowded with many people. By the way the name “Manseibashi” derived from the names of “Manseibashi Bridge” over the Kanda River nearby. However when Tokyo station was opened as a terminal station in 1919, Manseibashi station ended the role as a terminal one. Kanda station was also opened in the same year. Furthermore the station building was burnt down in the Great Kanto Earthquake in 1923, and Akihabara station was opened nearby in time with completion of the elevated tracks between Tokyo station and Ueno station in 1925. A role of Manseibashi station diminished gradually and the station was closed finally in 1943. After that Kanda has been developed as a business district. There are many cheap Izakaya (Japanese tavern) and it is crowded with office workers as well as Shinbashi. 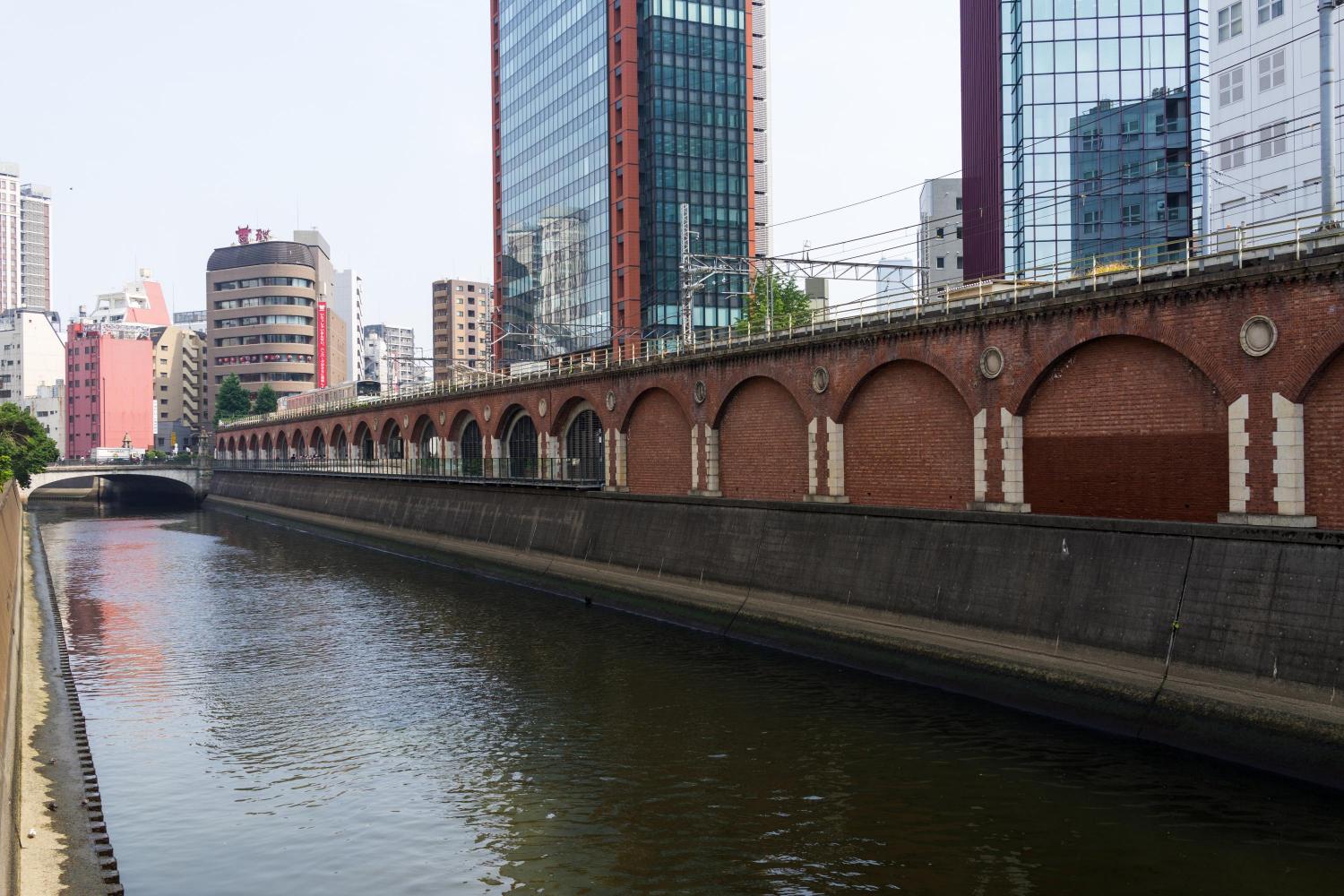 Sudacho old restaurant area is an area where some old restaurants founded from the 19th to the early 20th century are opened. It is located near the border between Kandasudacho and Kandaawajicho. You can enjoy Japanese food such as soba (buckwheat noodles), chicken pot (fowl cooked in a flat pan), Japanese sweet and so on. There remains buildings built from the 1920s to 30s because the area escaped from being damaged in the World War . In particular Isegen, Takemura, Botan, Matsuya and Yabusoba are famous. They are Selected Historical Building of the Tokyo Metropolitan Government except for Yabusoba, which was burnt down in 2013 and rebuilt in 2014. You can enjoy not only foods but also the atmosphere of the Taisho period (1912 - 1926) and the beginning of the Showa period (1926 - 1989) by only walking around the area. 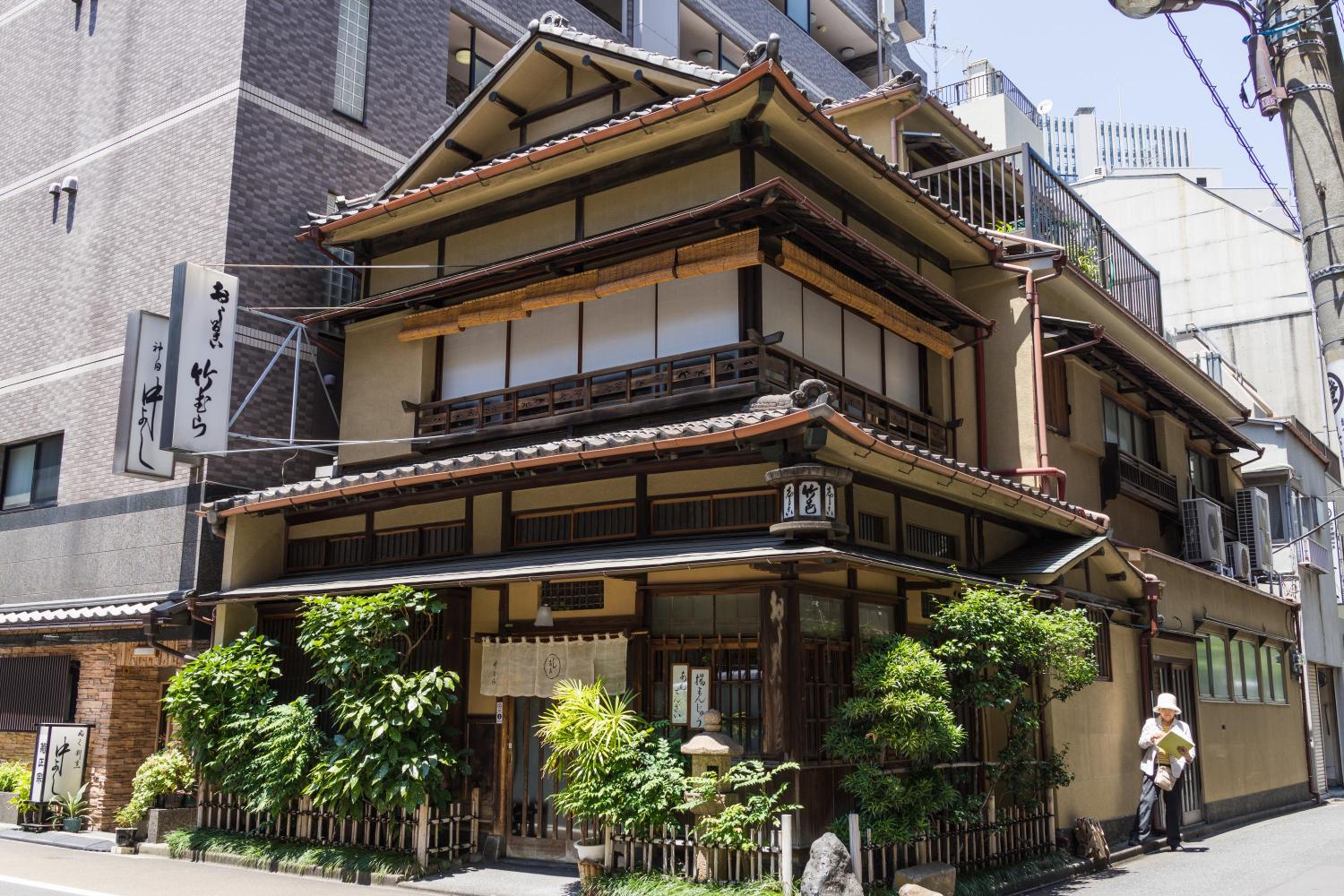 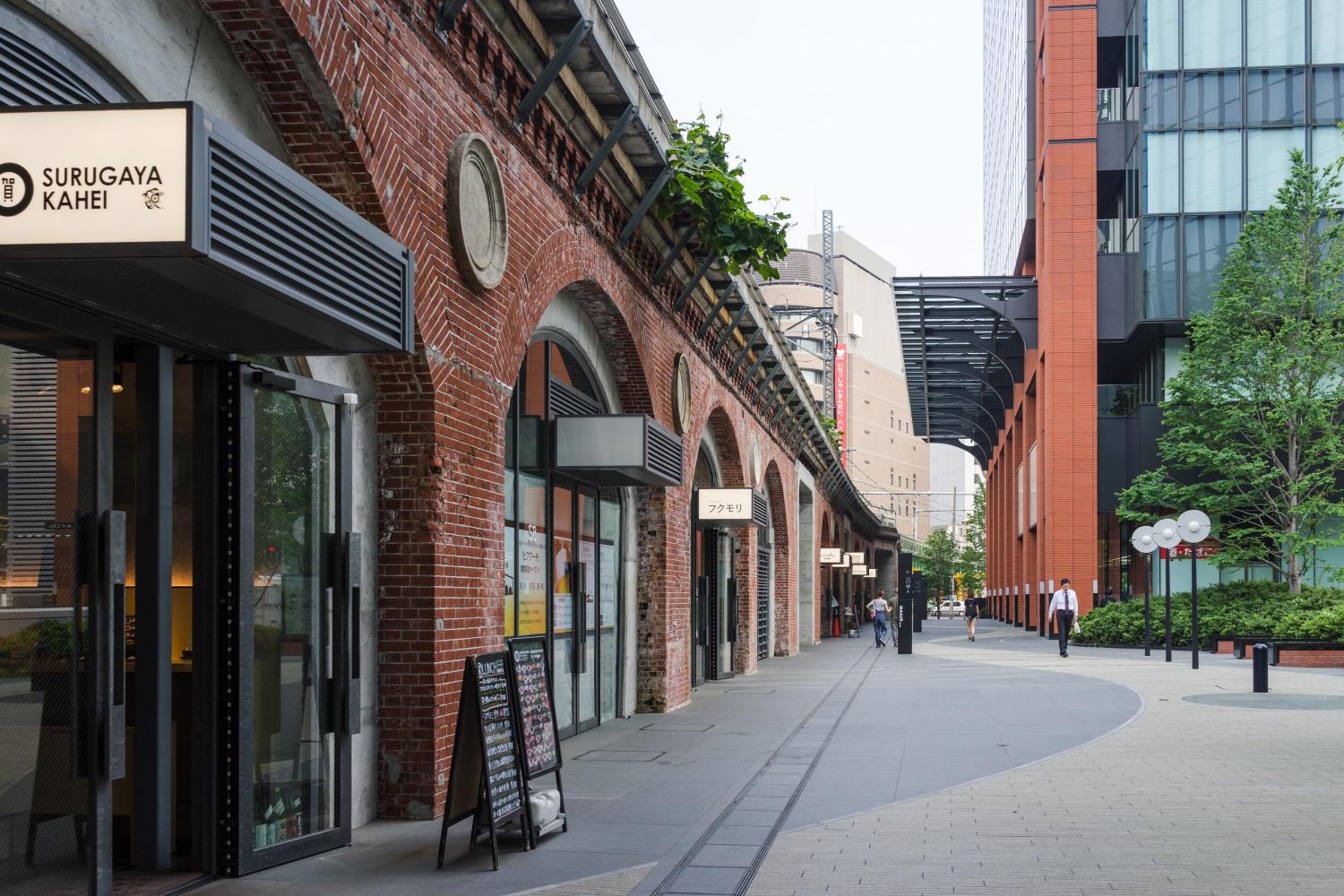 Maach Ecute Kanda Manseibashi is a commercial facility, which the remains of the former Manseibashi Station such as the platform were utilized as and was opened in 2013. Restaurants, cafes, general goods stores, etc. are opened. There is a glass-walled observation deck on the roof and you can enjoy trains passing close to the deck.
http://trendy.nikkeibp.co.jp/article/column/20130912/1052130/
http://www.maach-ecute.jp.e.of.hp.transer.com 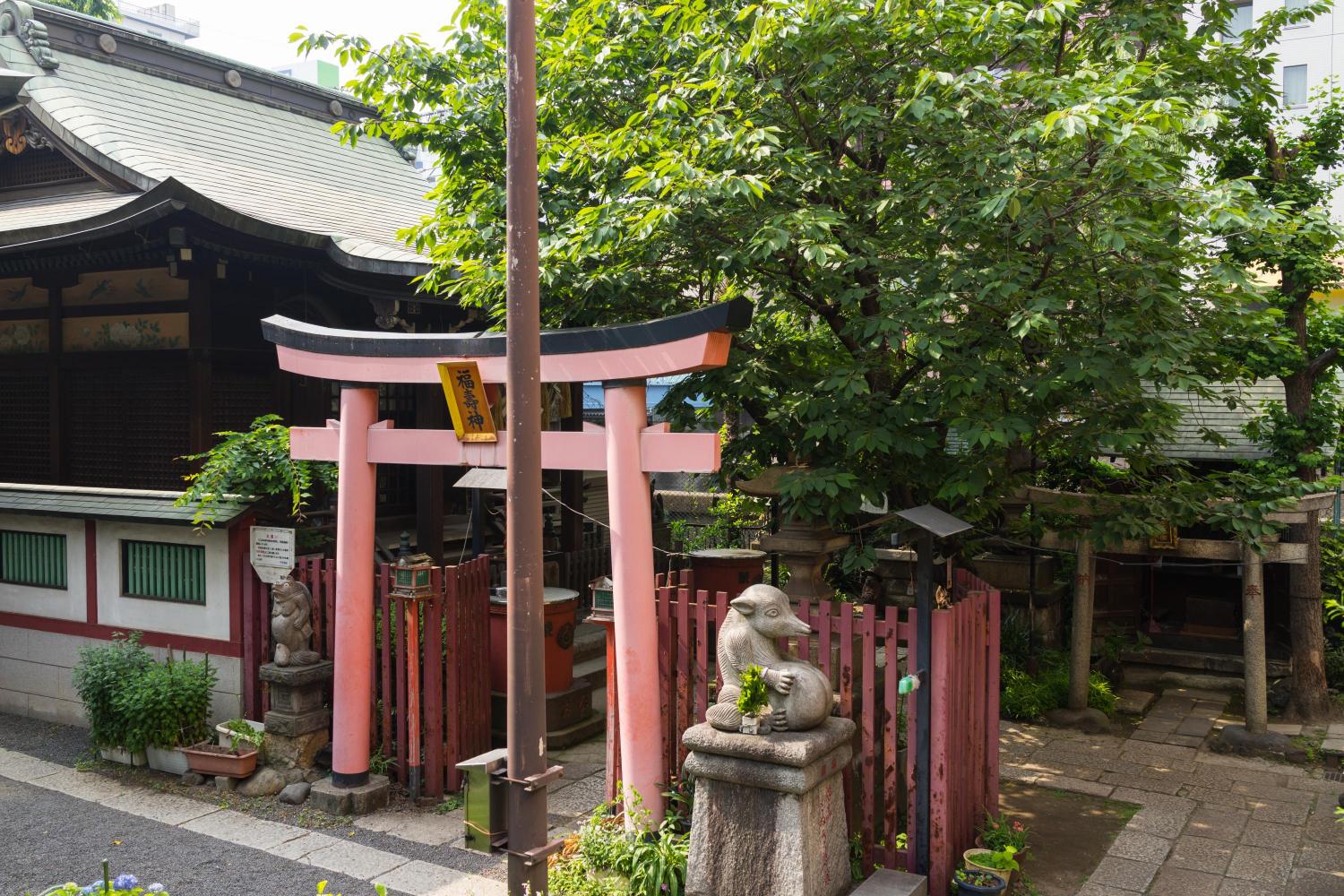 Yanagimori Shrine is also located along the Kanda River. It has a long history and was founded by Dokan OTA in 1458 and was moved to its present site in 1659. (The buildings were rebuilt after the Great Kanto Earthquake.) There are 7 medium and small shrines and unique stone images of a raccoon dog is famous. The precinct is not very large but it has a relaxing atmosphere with rich greenery.

Drinking area in the front of Kanda station 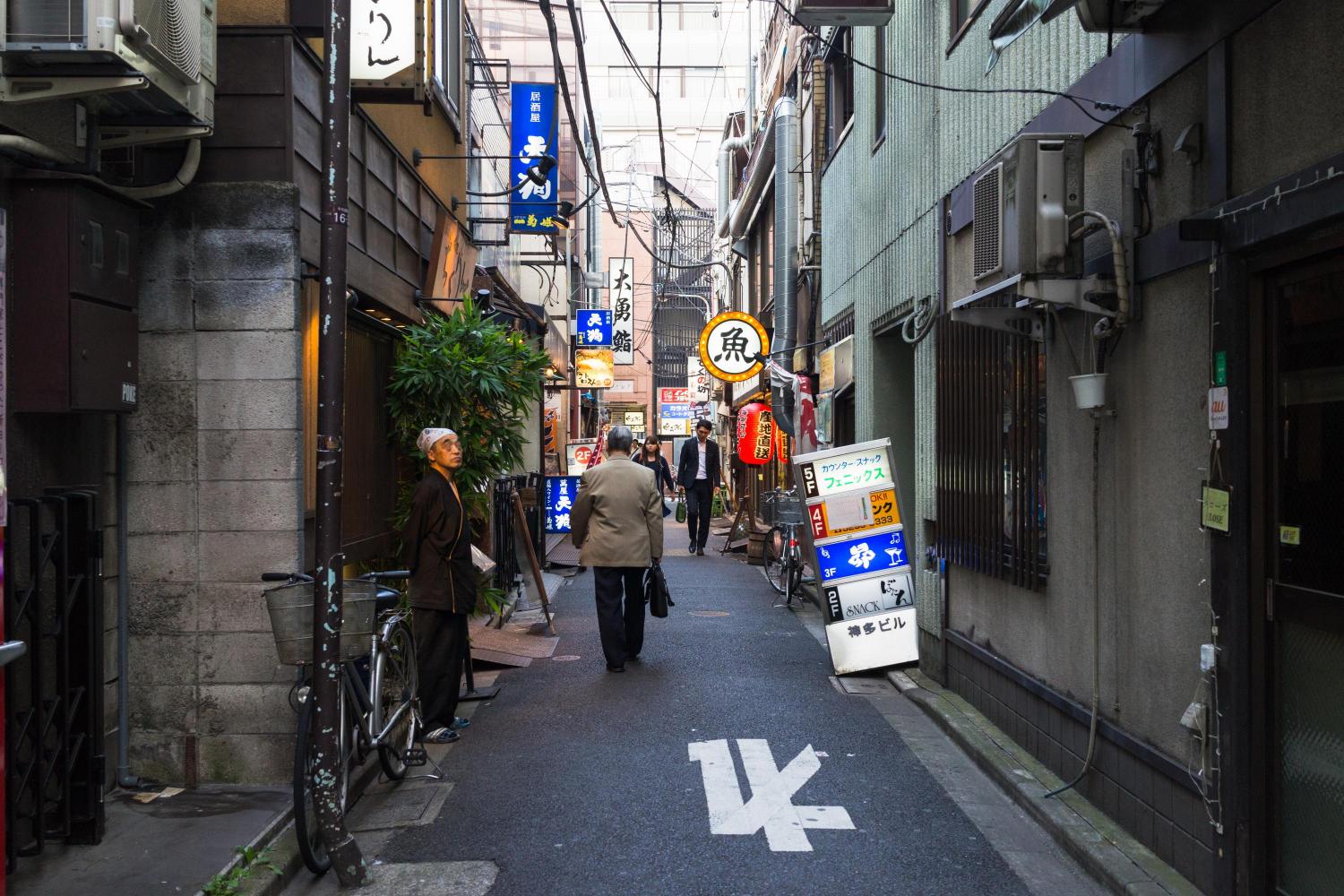 A narrow ally lined with Izakaya

There are many offices around Kanda station and a lot of cheap and delicious Izakaya for office workers are opened in the front of the station. Many of them have long history. You can see Izakaya being concentrated along a narrow alley and it has a unique atmosphere. Also Izakaya are located at Gado-shita (below the girder) around Kanda station as well as Yurakucho and Shinbashi. They are very lively. This red brick arch bridge was built in 1925 for connecting Tokyo station and Ueno station. By the way a famous Gado-shita area called Imagawakoji is located nearby. You can see an arresting sight at the place where buildings line under the girder bridge. 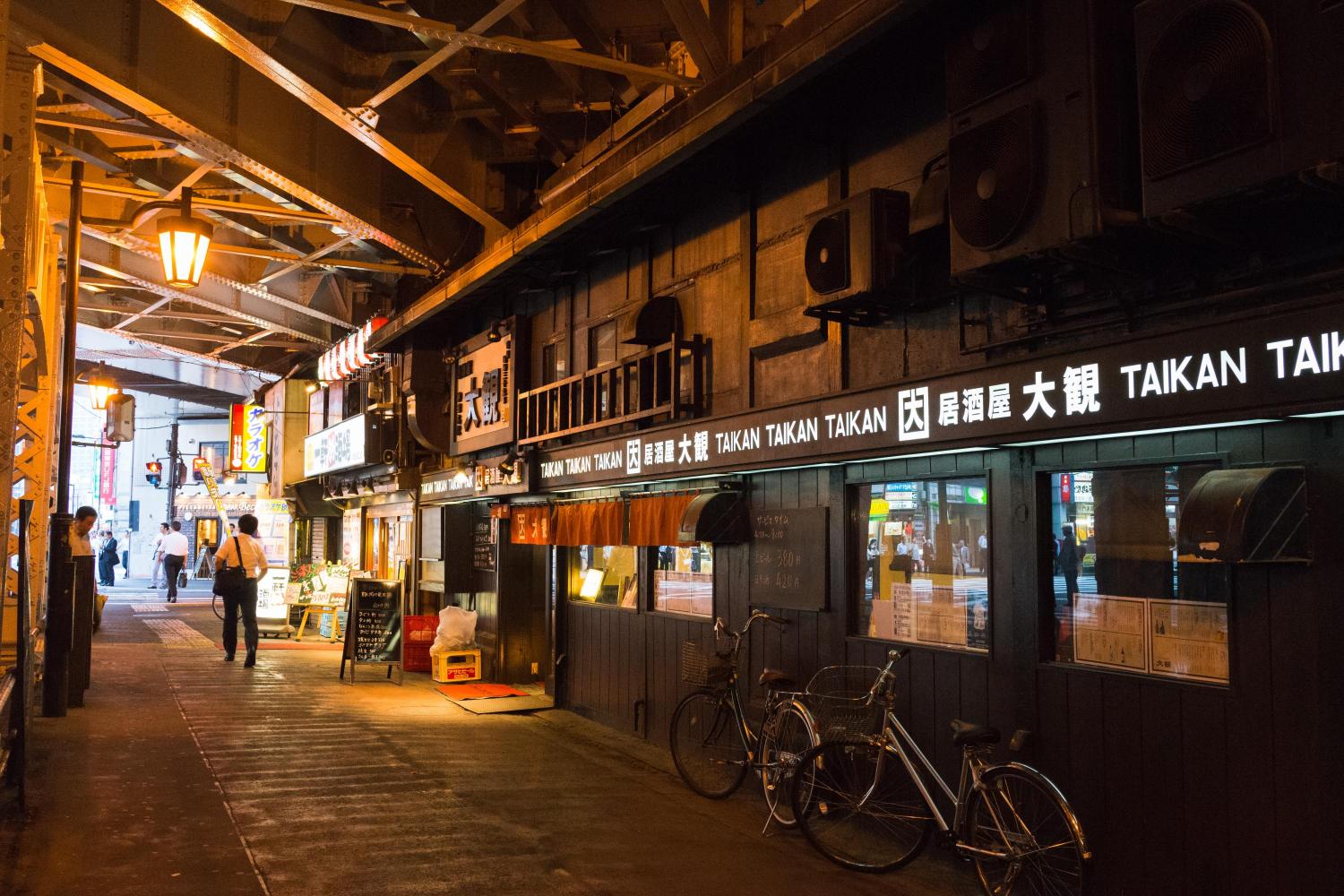 Kanda station west exit shopping street is located at the west exit of Kanda station and about 300 meters long. Many restaurants and Izakaya are opened and the street gets lively because there are many offices nearby. Satake Inari Shrine stands at the street and is familiar to people as the symbol though it is small. In the beginning of July Tanabata Edoro Matsuri (Tanabata Picture Lantern Festival) is held once every 2 years and the street is colored brightly.

Kanda has been a town of common people since the Edo period. It has not only historical buildings but also cheap and delicious Izakaya, so you can enjoy the town in various ways. If you want to know plain Tokyo, why don’t you go to Kanda?