Yurakucho: a mixture of new and old Tokyo 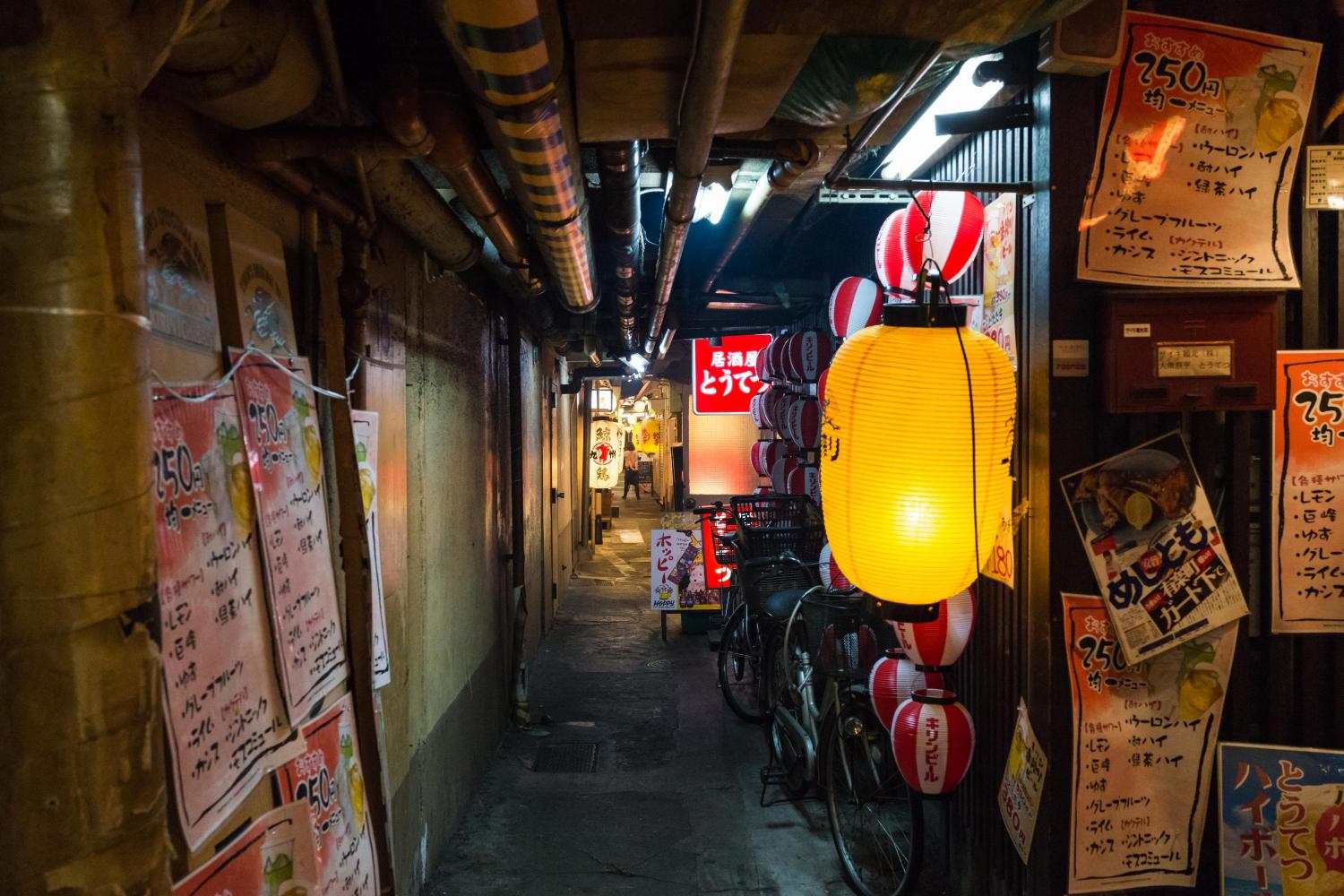 Yurakucho is a shopping district adjacent to Marunouchi and Ginza. Going south on Naka Dori Street, you can reach there. You can enjoy contemporary and neat Tokyo, such as the Tokyo International Forum and the redeveloped buildings at the east side of Yurakucho station. There are commercial facilities that have the advantage of fashions at the east side of the station, such as Hankyu MEN'S TOKYO, LUMINE and MARUI. On the other hand, you can also enjoy miscellaneous and common Tokyo, such as Japanese taverns at an area called Gado-shita (below the girder) including Yakitori Alley. Yurakucho is a very interesting area where various aspects of Tokyo can be seen. By the way, the boundaries between Yurakucho and Marunouchi or Hibiya are indefinite, so I introduce the area along Naka Dori Street on an article of Marunouchi, and Nissay Theatre and the Imperial Hotel on an article of Hibiya.

In the Edo period (1603 - 1868), Minami-machi bugyosho (magistrate's office) was located at Yurakucho. Tadasuke OOKA and Kagemoto TOYAMA who were the magistrates, often appear in historical plays and be familiar to many Japanese people. It is said that the name “Yurakucho” derives from the name of Urakusai ODA, who was a younger brother of Nobunaga ODA, a hero in the Sengoku period (1467 - 1590) and built his residence near there. However that is not certain. From the Meiji period to the pre-war period (1868 - 1945), theaters and offices of newspaper companies were built around there. Also the Tokyo Prefectural office (corresponding to the present Tokyo Metropolitan Government office) was once located. Immediately after the World War , there was a black market called Sushiya Yokocho and it got very lively. However those stores were removed and Tokyo Kotsu Kaikan was build at the place in 1965. The offices of newspaper companies in Yurakucho had been moved gradually and the area have developed as a shopping district, for example Sogo, a major department store was opened in 1957 (Now Bic Camera operates). The redevelopment in front of the station also proceeded, and Yurakucho Marion was opened in 1984 and Yurakucho Itocia in 2007. Movie theaters are housed in Yurakucho Marion, which have a trace of the theater district. By the way some theaters still remain in Hibiya adjacent to Yurakucho. The Tokyo Metropolitan Government office was moved to Shinjuku in 1991 and the Tokyo International Forum was built at the site.

The Tokyo International Forum is an international convention hall, which was designed by Rafael Violy and completed in 1997. Grass Building is architecture on the theme of a ship, which features the faade covered with glass and the inside where the building frames are exposed. It is one of representative contemporary buildings in Tokyo.
http://www.t-i-forum.co.jp/en/ 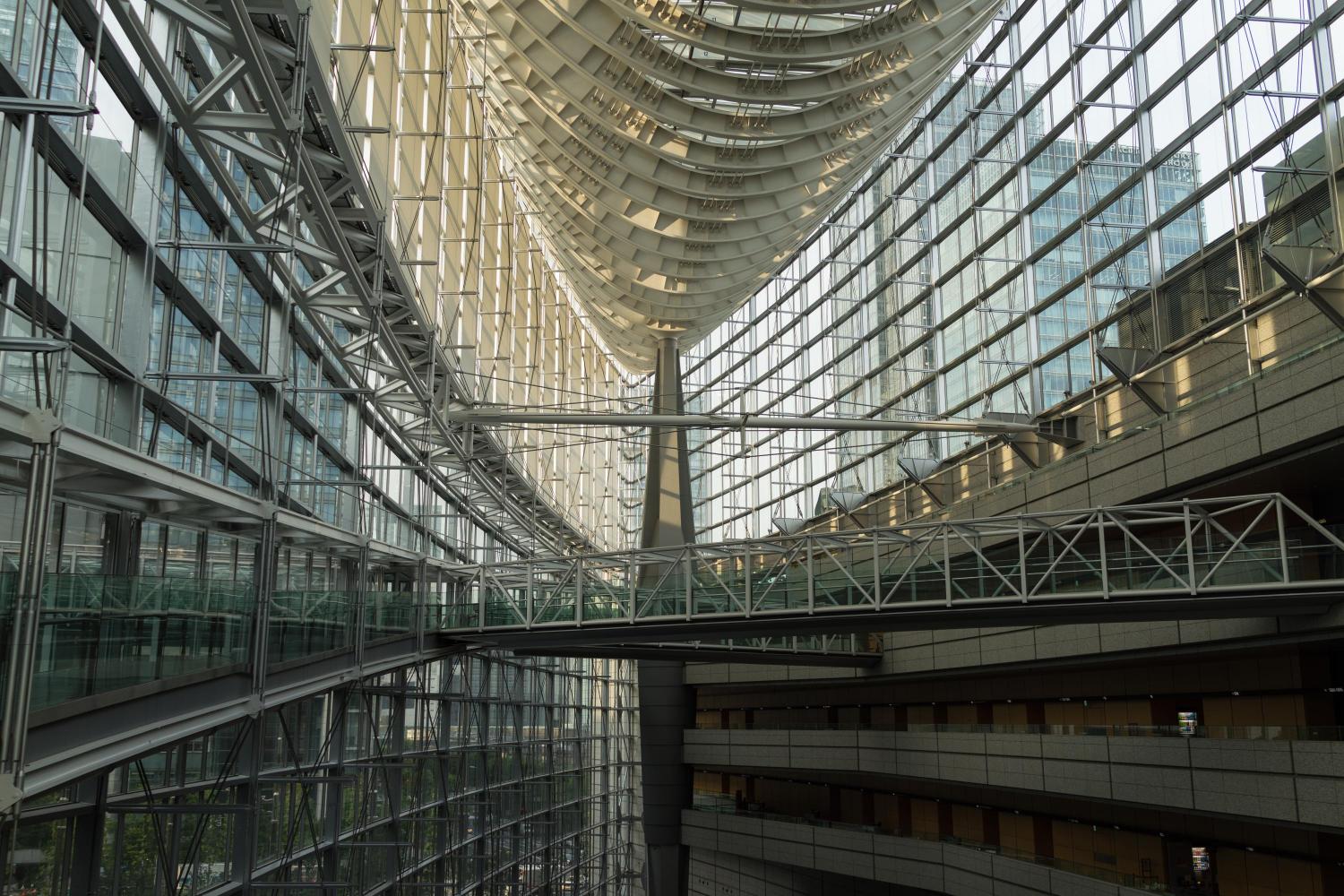 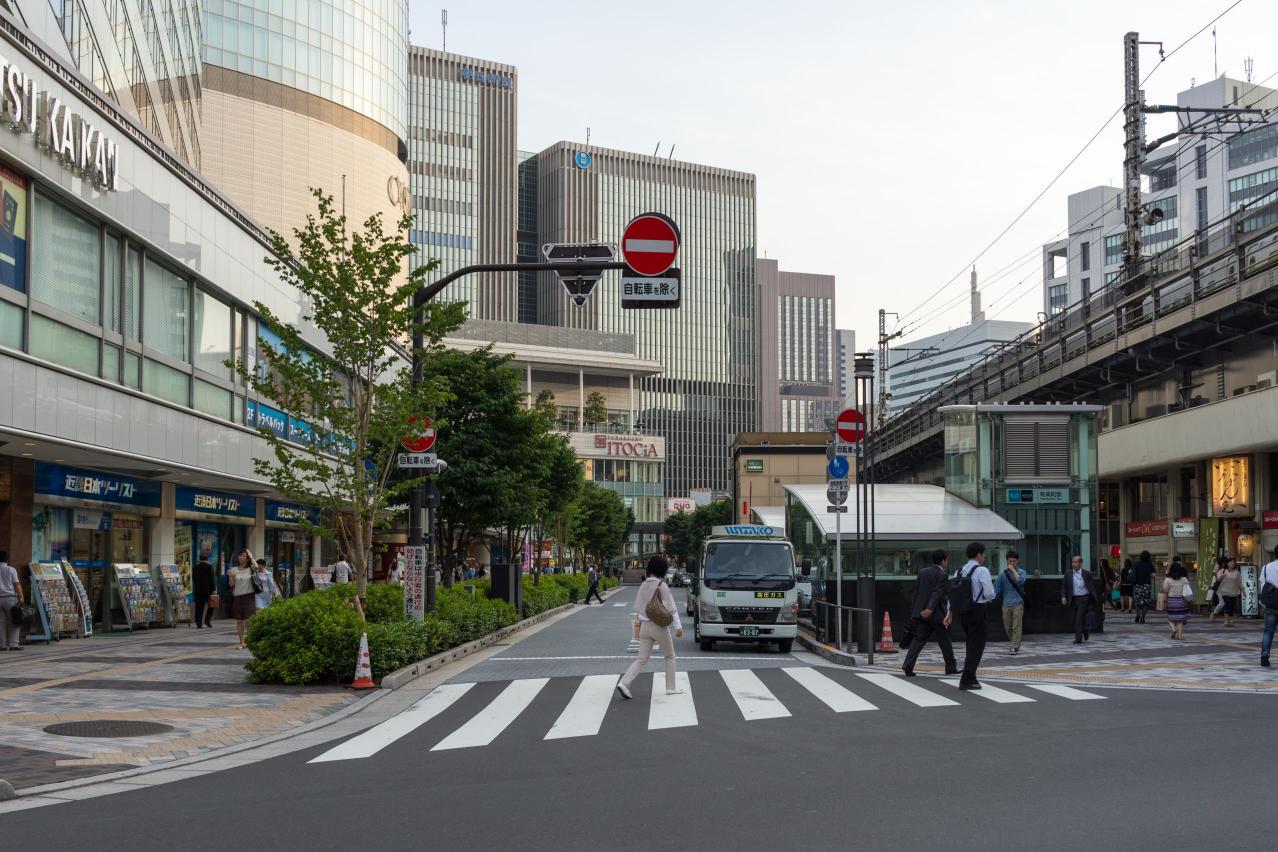 The east of Yurakucho station 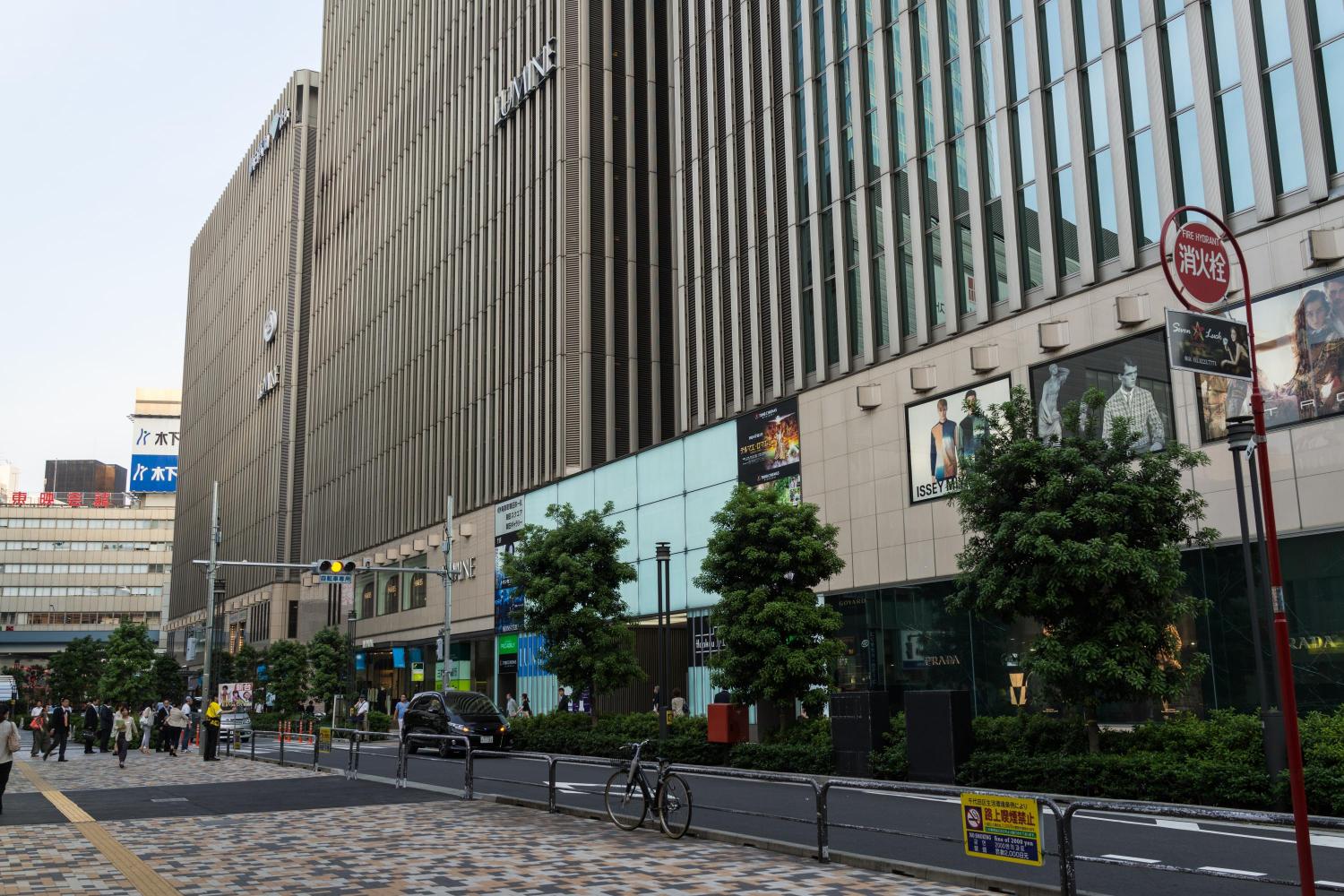 At the east of Yurakucho station, there remains an area that has not been redeveloped. Hyakkaen, a fruiter founded in 1954 are opened there and its cut fruit is popular. Such a gap may be one of the features of Tokyo. 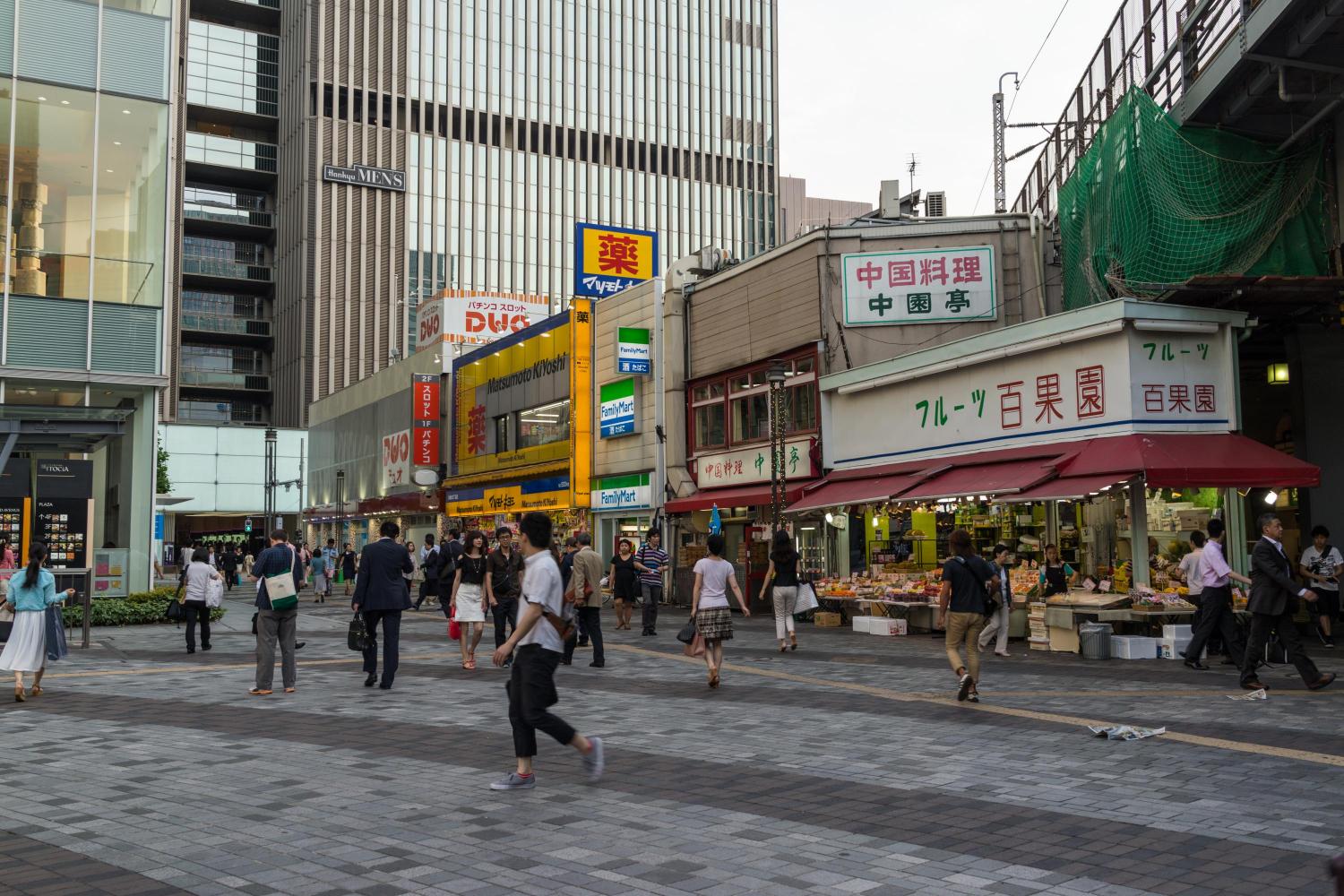 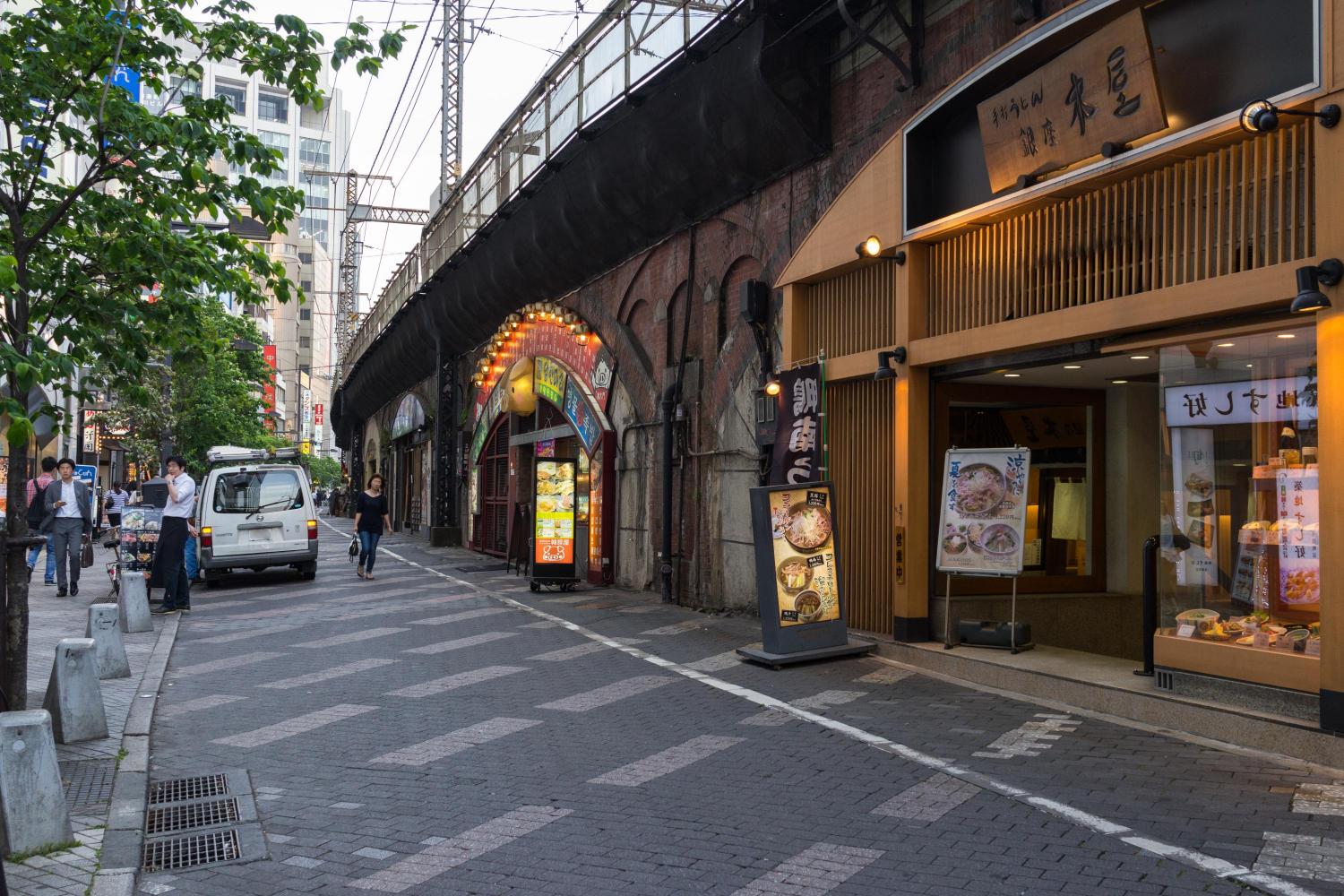 Yurakucho Koka-shita Center Shotenkai (Yurakucho Center Shopping Street under the girder bridge) is located between Yurakucho station and Tokyo station, and some restaurants are opened. At left-hand side of the street as seen by Yurakucho station there is a section called Marusan Yokocho. Japanese taverns are opened in narrow space and it has a unique atmosphere. Yurakucho Concourse along Harumi Street is interesting with signboards and posters in the Showa period (1926 - 1989) though it is a short section. 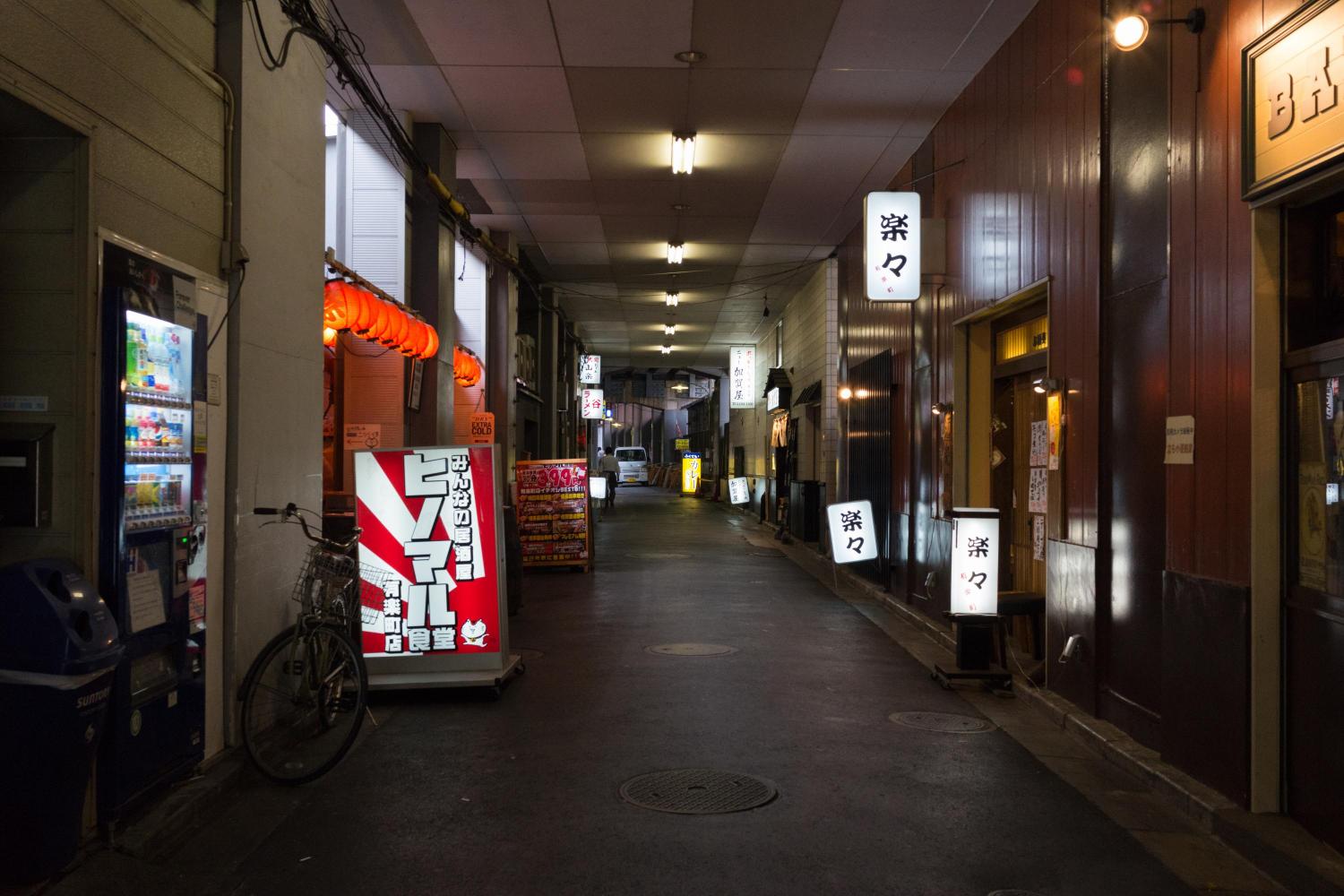 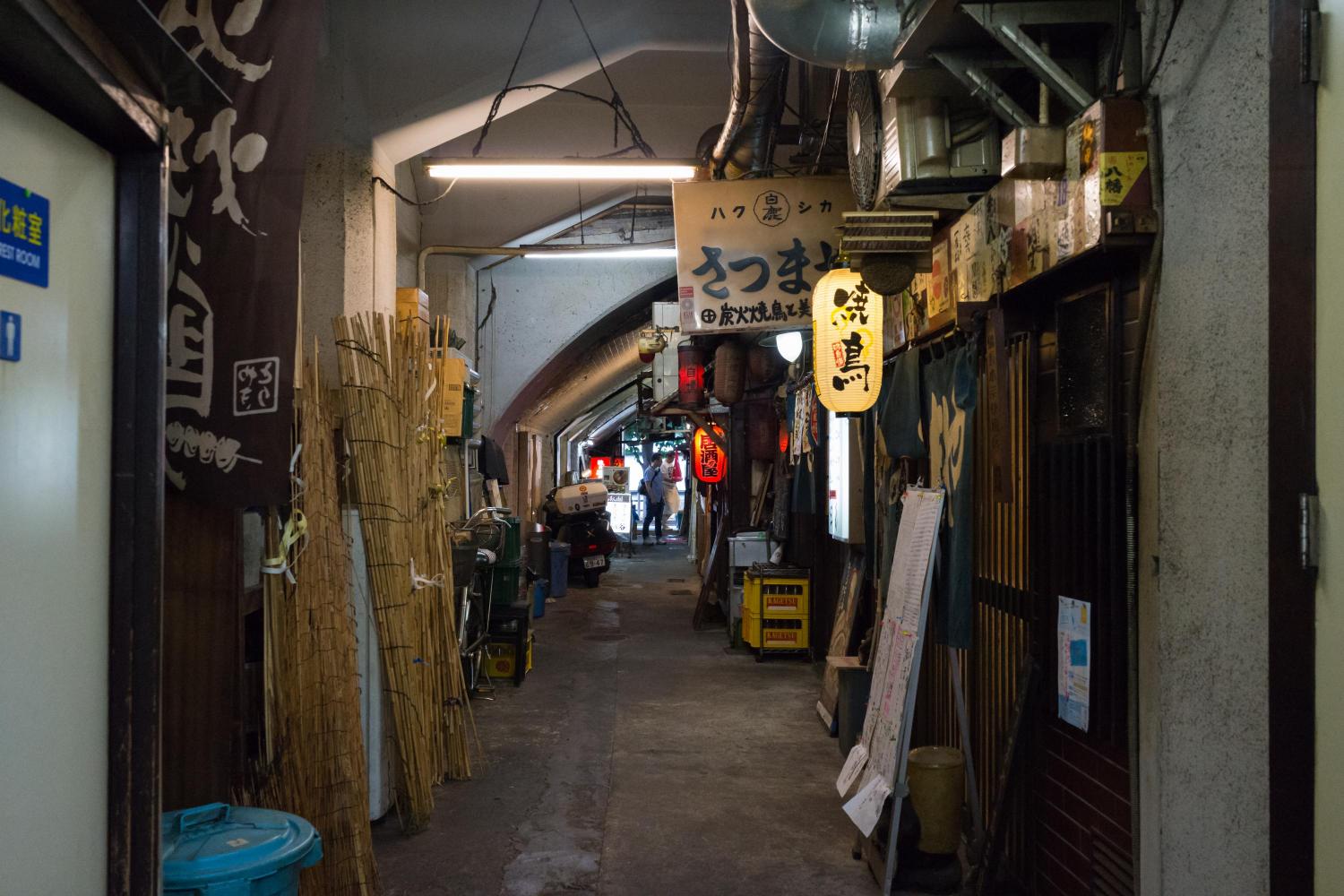 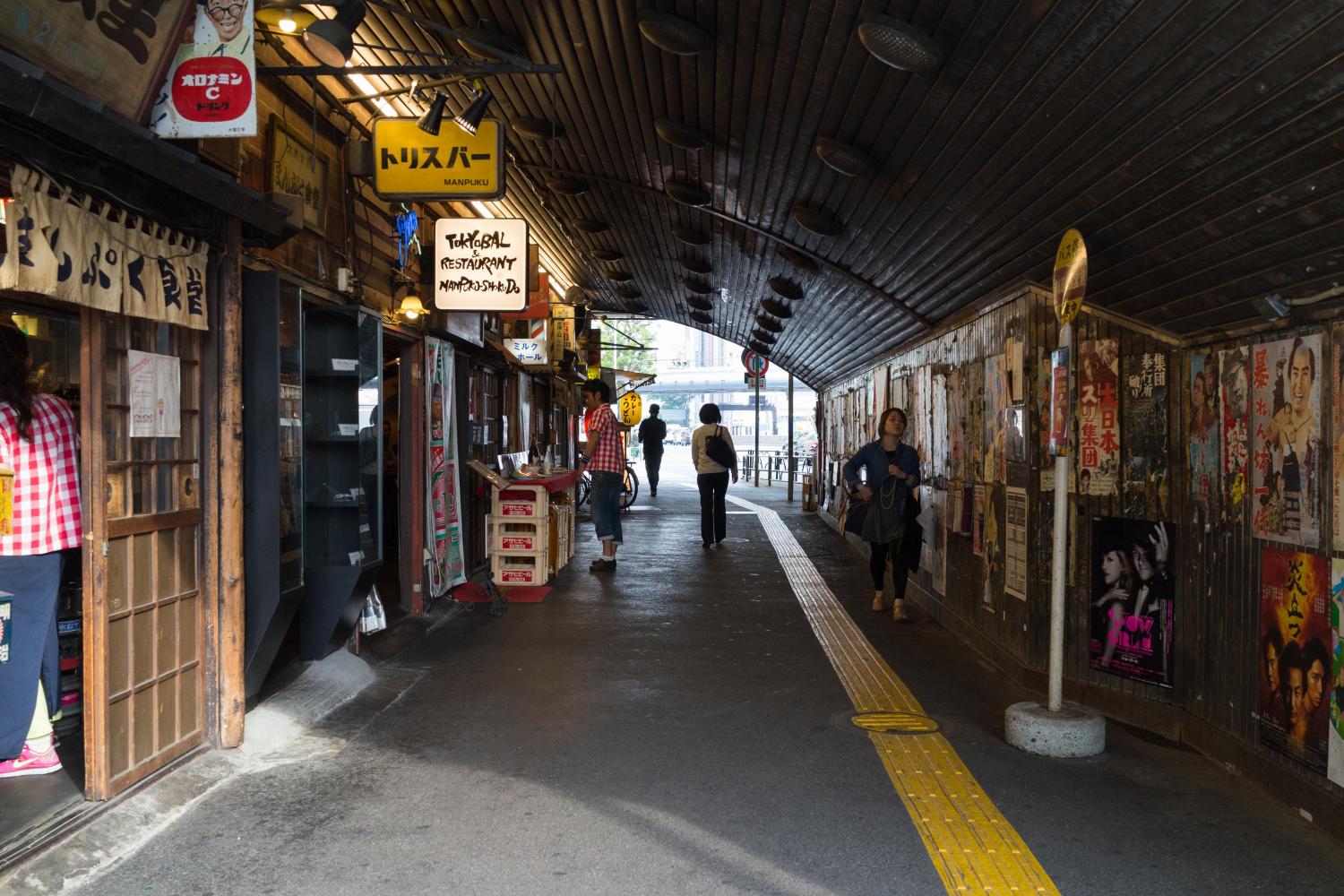 Yakitori Alley is an area located at the south side of Harumi Street and the east of the girder bride, and many yakitori-ya (grilled chicken restaurants) are opened there. They have seats on the terrace, so you can enjoy alcohols and yakitori (grilled chikien) with an open air. It is the most famous spot in Gado-shita. 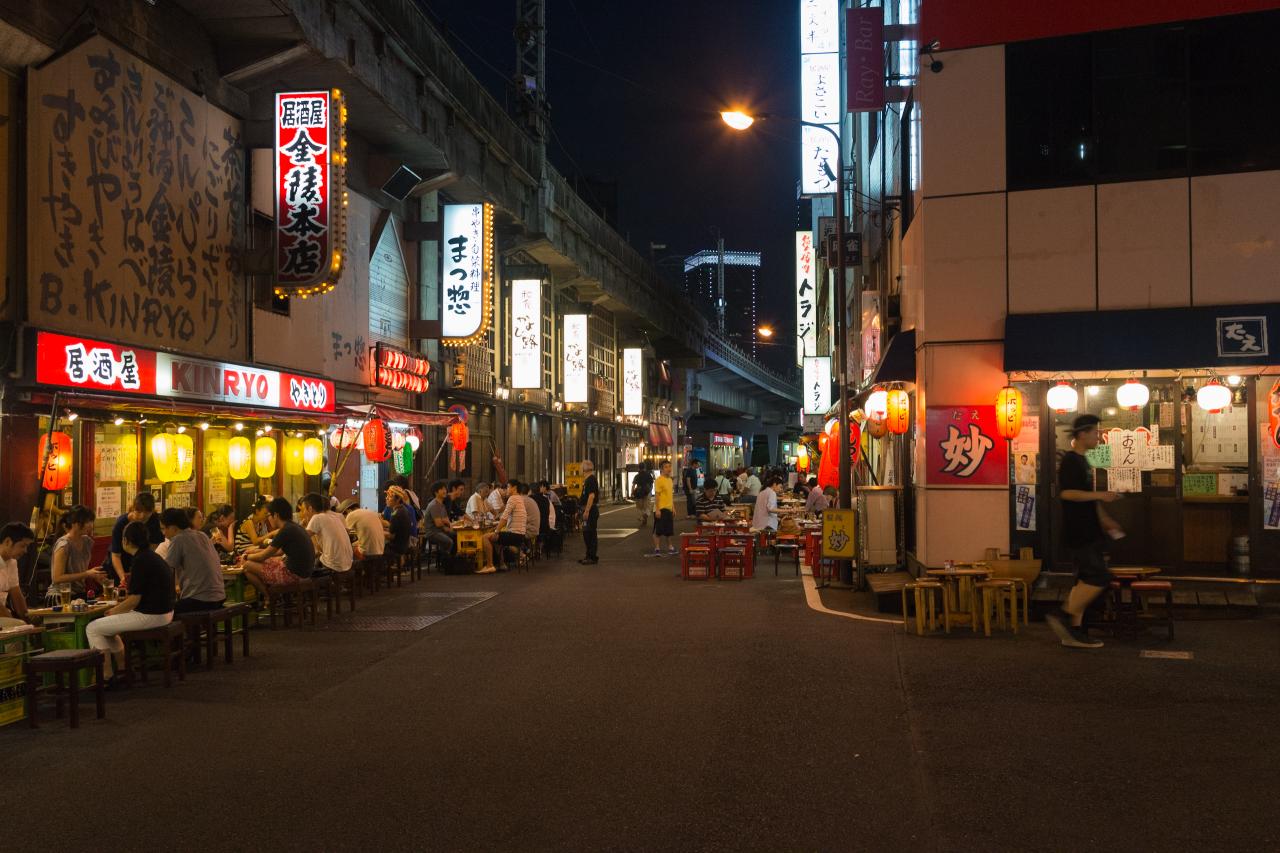 There are also some Japanese taverns in a section under the girder bridge from the south side of Yakitori Alley to the street on the north side of the Imperial Hotel. Especially the south of the section is called Yurakucho Sanchoku Inshokugai and Japanese taverns that deal with ingredients from various areas in Japan gather. 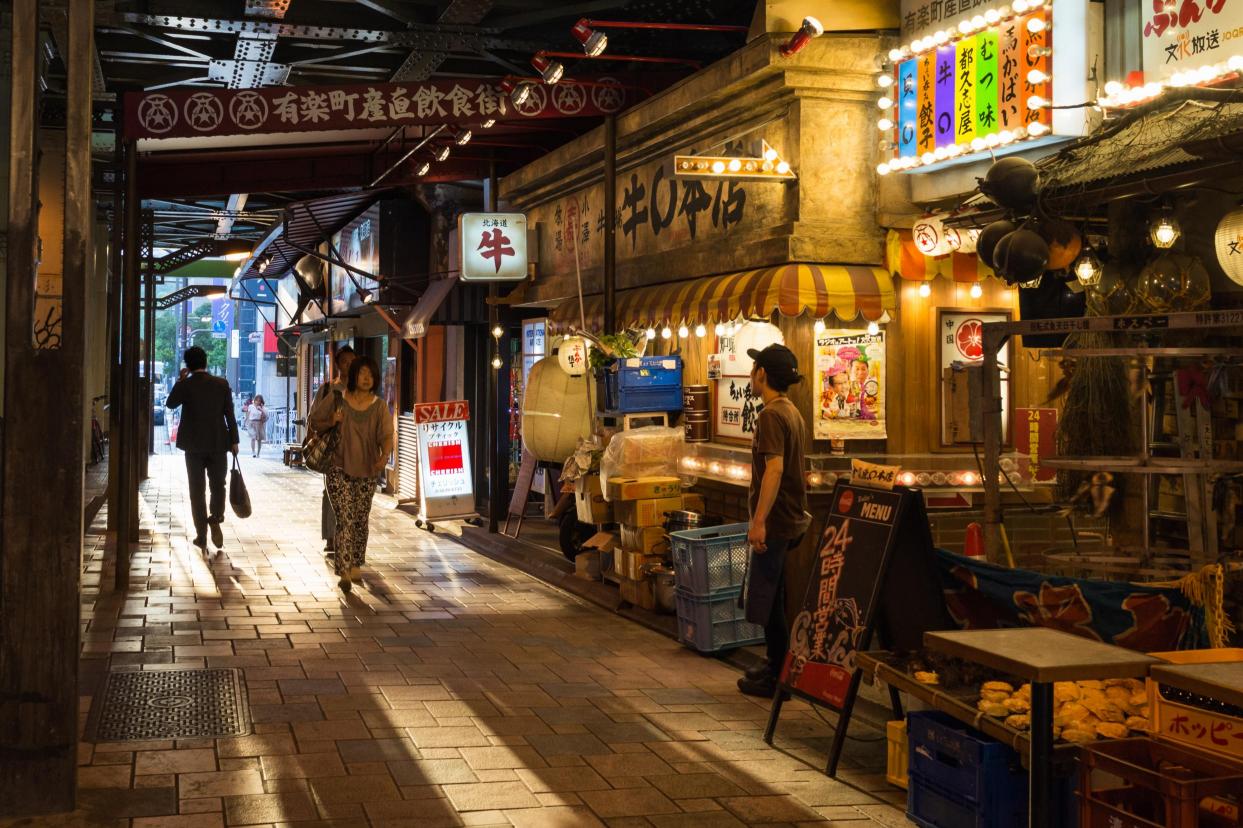 In the further south, Nishiginza JR Center and International Arcade are located under the girder bridge. In Nishiginza JR Center there are a few stores opened and the place is in a weird atmosphere. International Arcade is a shopping street, which was opened for foreign tourists in time for the Tokyo Olympic Games held in 1964. The east side of the girder bridge is called Ginza Corridor Street and there are various restaurants, which are ordinary ones unlike other spots of Gado-shita.
Gado-shita is an area that still retains some good traces of the Showa period and a relaxing place where office workers nearby cure their fatigue at work.

Yurakucho is a unique town where the latest part of Tokyo and some good traces of the Showa period are mixed. One who goes Tokyo should visit there.