Marunouchi : a representative business and shopping district in Tokyo 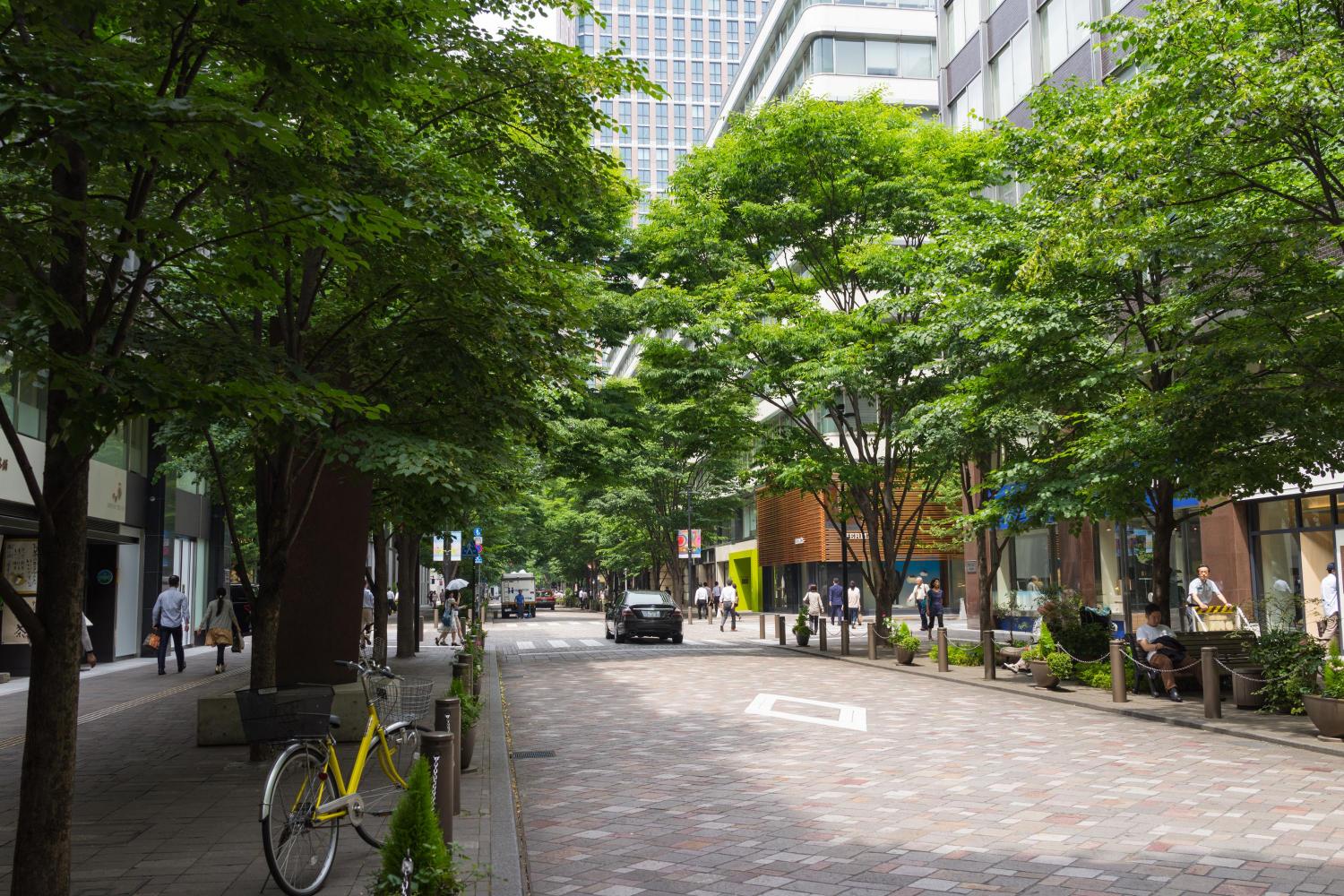 Marunouchi is a representative business district of Japan. There remain modern architectures that were built after the Meiji period (1868 - 1912) such as Tokyo Station. On the other hand, Marunouchi bristles with high-rise buildings and you can see both modern and contemporary part of Japan. It is also an area where you can enjoy shopping and eating because there are many brand stores and restaurant along Naka Dori Street.

Marunouchi was a part of Tokyo Bay before Ieyasu TOKUGAWA moved to and lived in the former Edo Castle (the present Imperial Palace) in the end of 16th century. The area was reclaimed in accordance with expansion of the castle, and residences of Shinpan (descendants of Ieyasu TOKUGAWA) and Fudai (hereditary vassals to the Tokugawa family) Daimyo (feudal lords) were built there. The area was called Daimyo Koji and it remains as a name of a street. After the Meiji period the residences were took down and the area was used for army barracks and drill court for a time. Later the army transferred and the whole area was sold to the Mitsubishi Zaibatsu (financial and industrial conglomerate). In those days Marunouchi became a wasteland, but it developed as a business district after the Mitsubishi Ichigokan, which is the first office building in Japan was completed in 1894. Modeled after Lombard Street, London many red brick buildings were built along Babasakimon Street and the street was called “Icho London (London Street)”. After Tokyo Station was completed in 1914, development proceeded along Gyoko Street. American style office buildings such as the former Marunouchi Building were built side by side and the street was called “Icho New York (New York Street)”. However these buildings were lost by the Great Kanto Earthquake, the air raid during the World War II and demolition due to short supply of office buildings during the period of high economic growth after the war.
After the war, modern buildings, whose height were unified into 32 meters, were built side by side based on Marunouchi Total Remodeling Plan. In the 1970s, buildings exceeding 100 meters in height began to be built. In the end of 20th century, it is said to go down in comparison with other business districts such as Shinjuku. But large redevelopments such as Marunouchi Building have proceeded since 2000s and Marunouchi attracts attention again. Also many brand stores and restaurants have opened along Naka Dori Street and Marunouchi become popular as a shopping district. 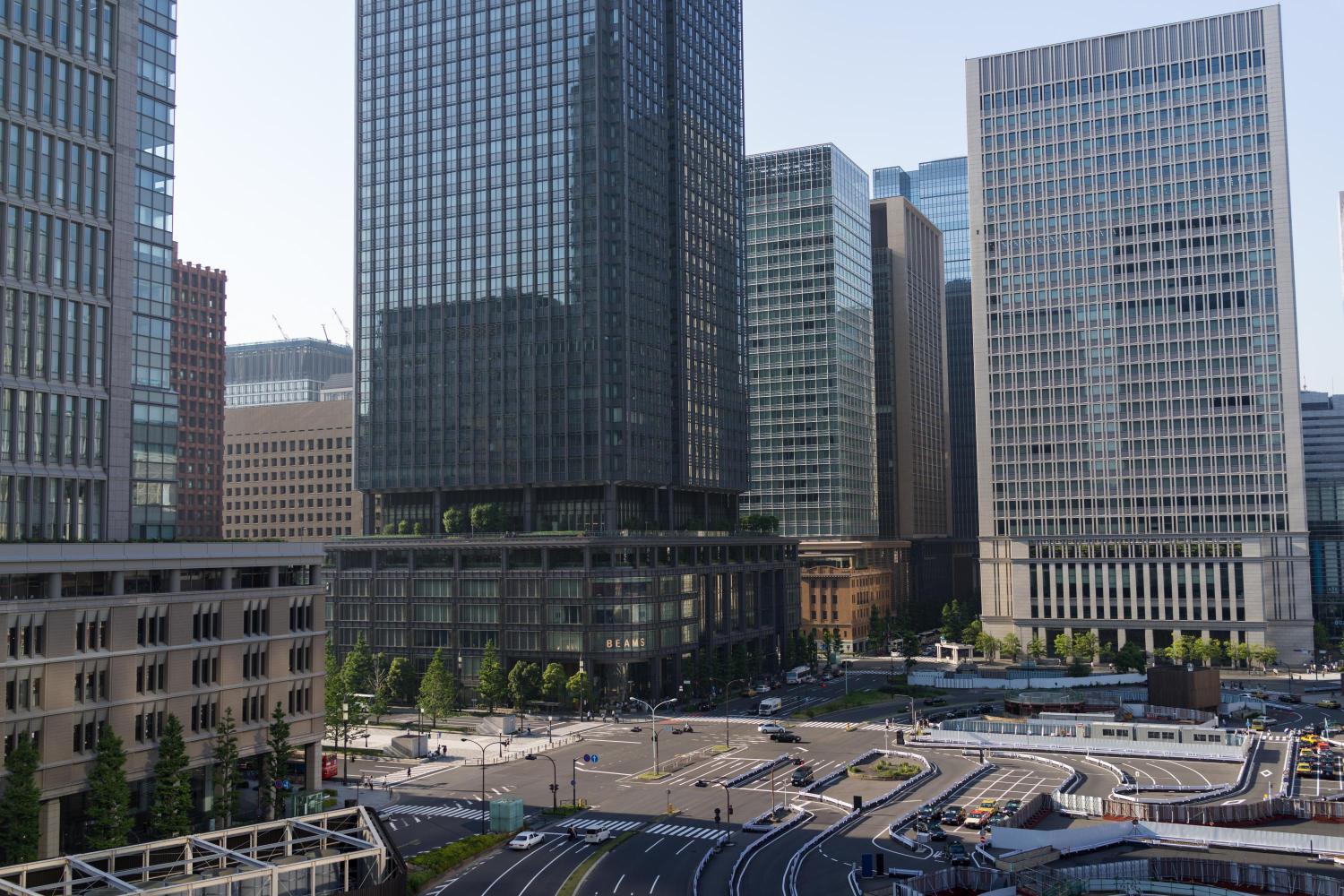 Buildings in the front of Tokyo Station 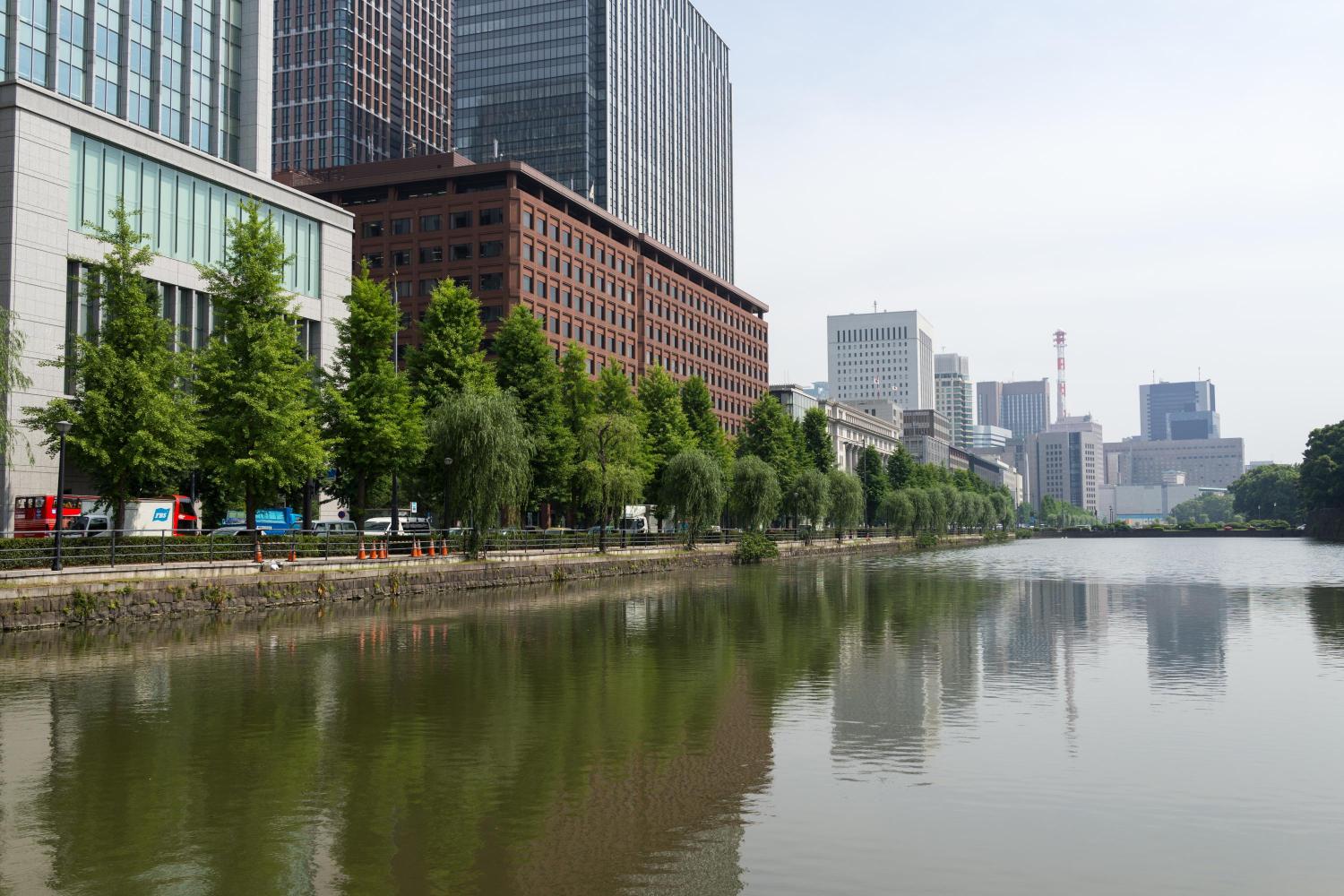 One of the best architecture among the modern architectures is Tokyo Station. It was completed in 1914 and is a representative work of Kingo TATSUNO, who is called “the father of the modern architecture”. A part of the station was burnet down by the air raid during the World War II, but in the 21th century it was restored to the building that used to be.

The Mitsubishi Ichigokan was the first office building of Japan and completed in 1894. It was a Queen Ann style red brick building designed by Josiah CONDER. But due to a sharp rise in demand for office buildings during the period of high economic growth, the building was demolished in 1968. The present building was reconstructed in 2009 based on the drawings and pictures in the past. It is used for an art museum, which exhibits modern art from the late 19th century to the early 20th century.
http://mimt.jp/english/ 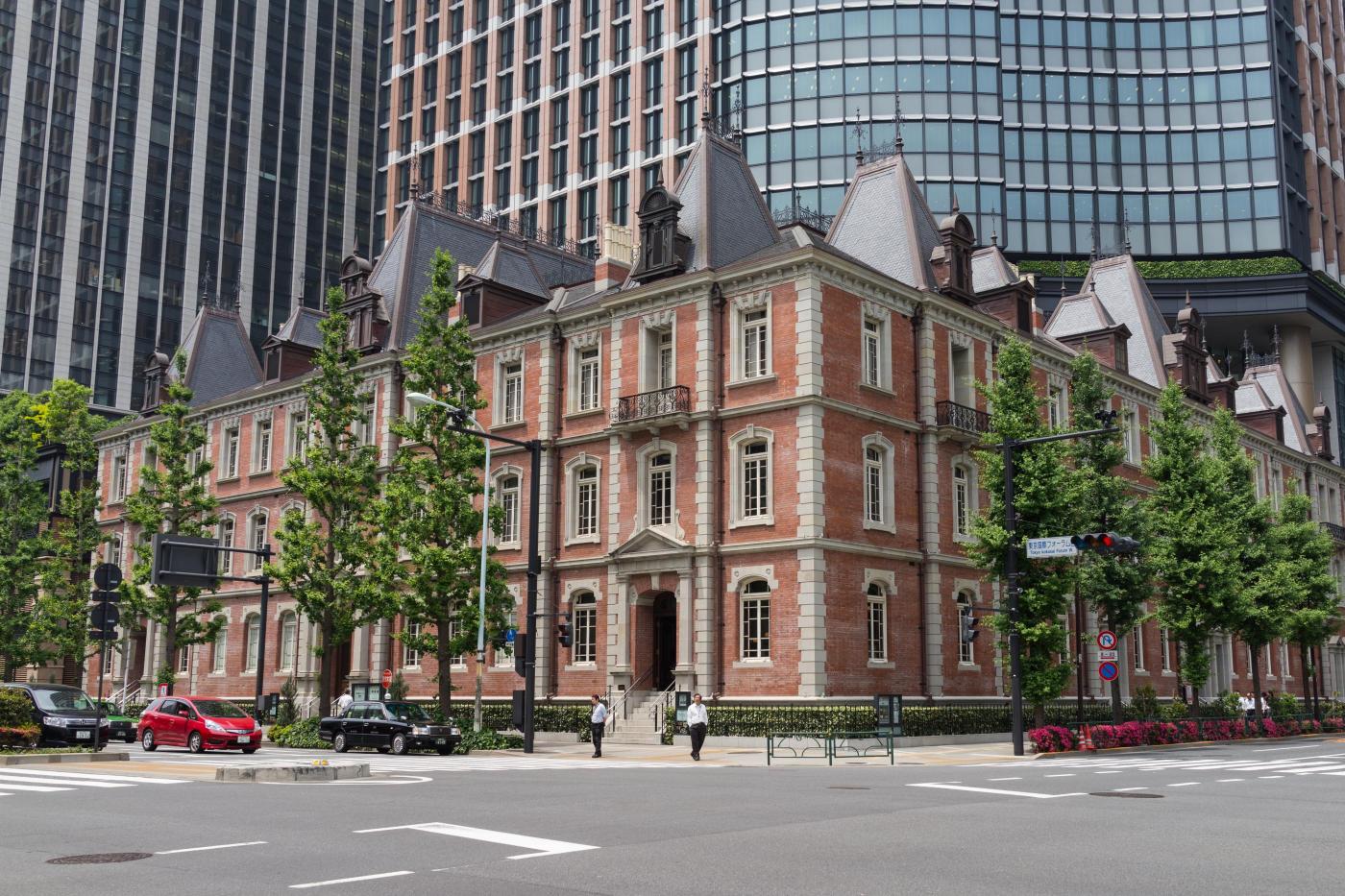 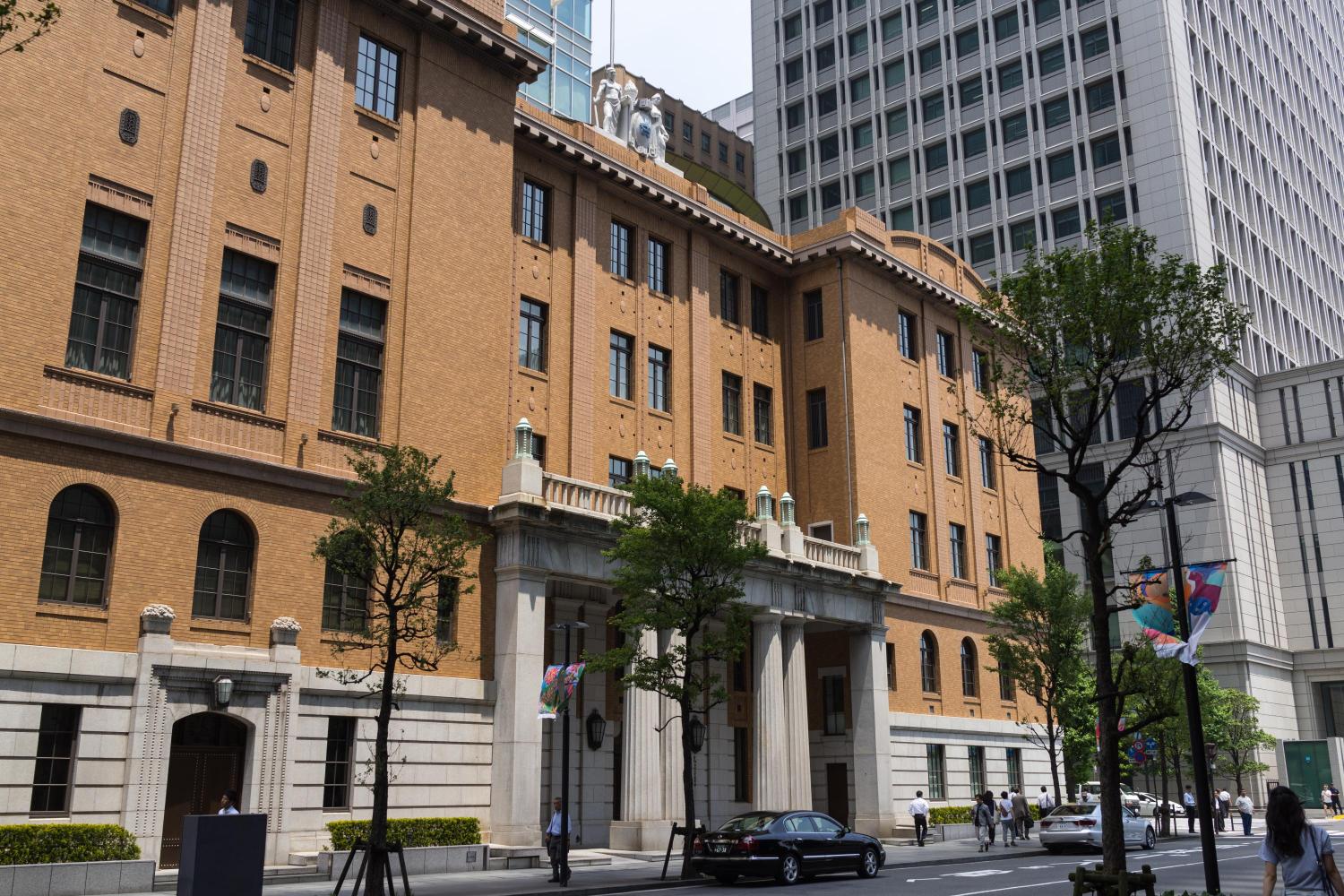 The building of the Industry Club of Japan

Tokyo Central Post Office was designed by Tetsuro YOSHIDA and completed in 1931. It was one of the representative modernism architectures in Japan. Unfortunately the building was demolished in 2009 and the JP Tower was built on the site now. The JP Tower consists of a higher story part and a lower story part where some of the old building is preserved. (The appearance of the old building is reproduced completely.) There is a commercial facility called KITTE in the lower story part and many stores open there, which deal with local specialties and foods in various places in Japan.
http://jptower-kitte.jp/en/ 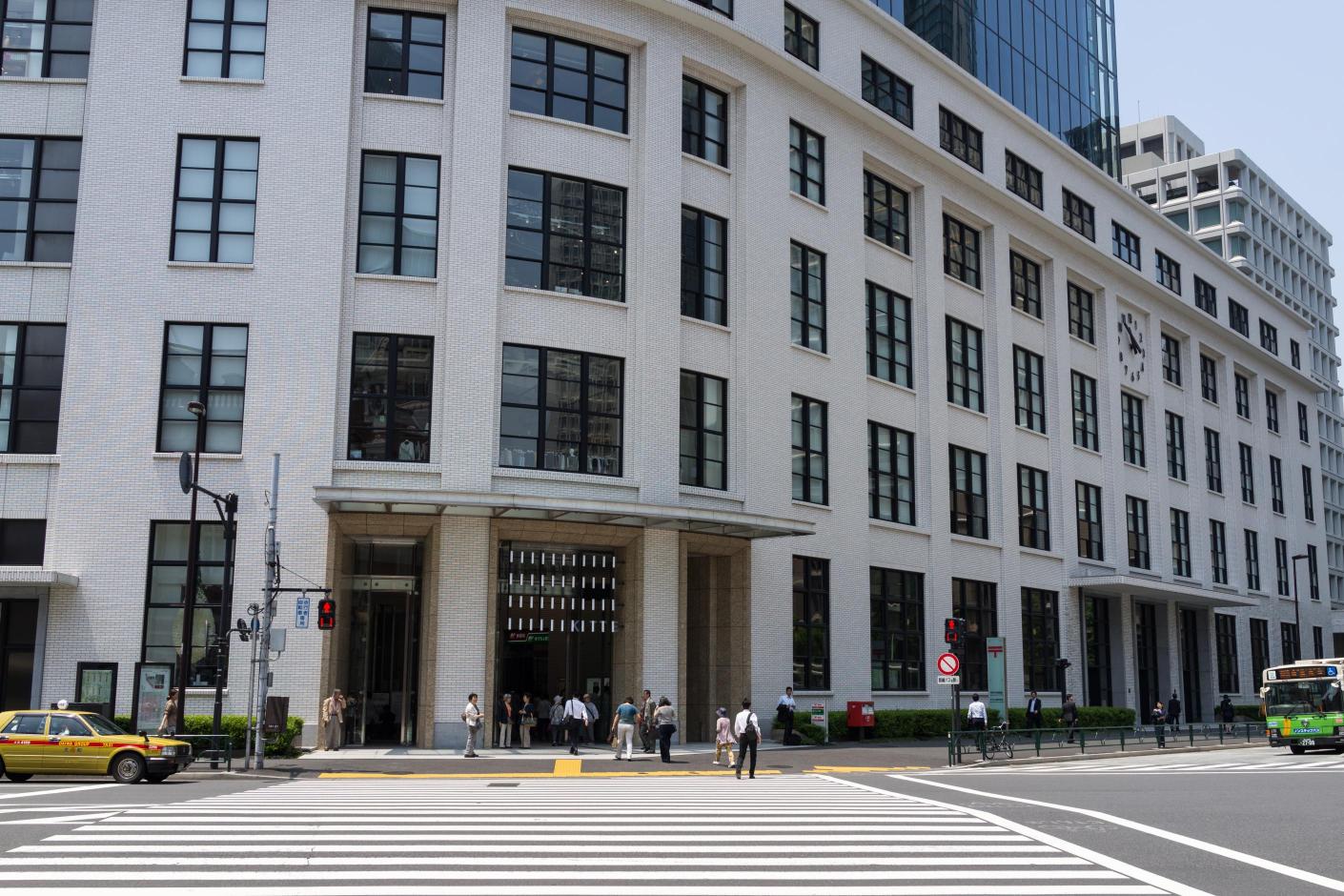 The Meiji Life Building was designed by Sinichiro OKADA and completed in 1934. It is a neoclassical style building where Corinthian colonnades stand in a row and it features profound appearance. It survived the turbulent Showa period (1926 - 1989) and still remains, for example it was requisitioned by the Headquarters of the U.S. Air Forces Far East after the war. It is open for viewing from 11 am to 5 pm every Saturday and Sunday.
http://www.myplaza.jp/en/about.html 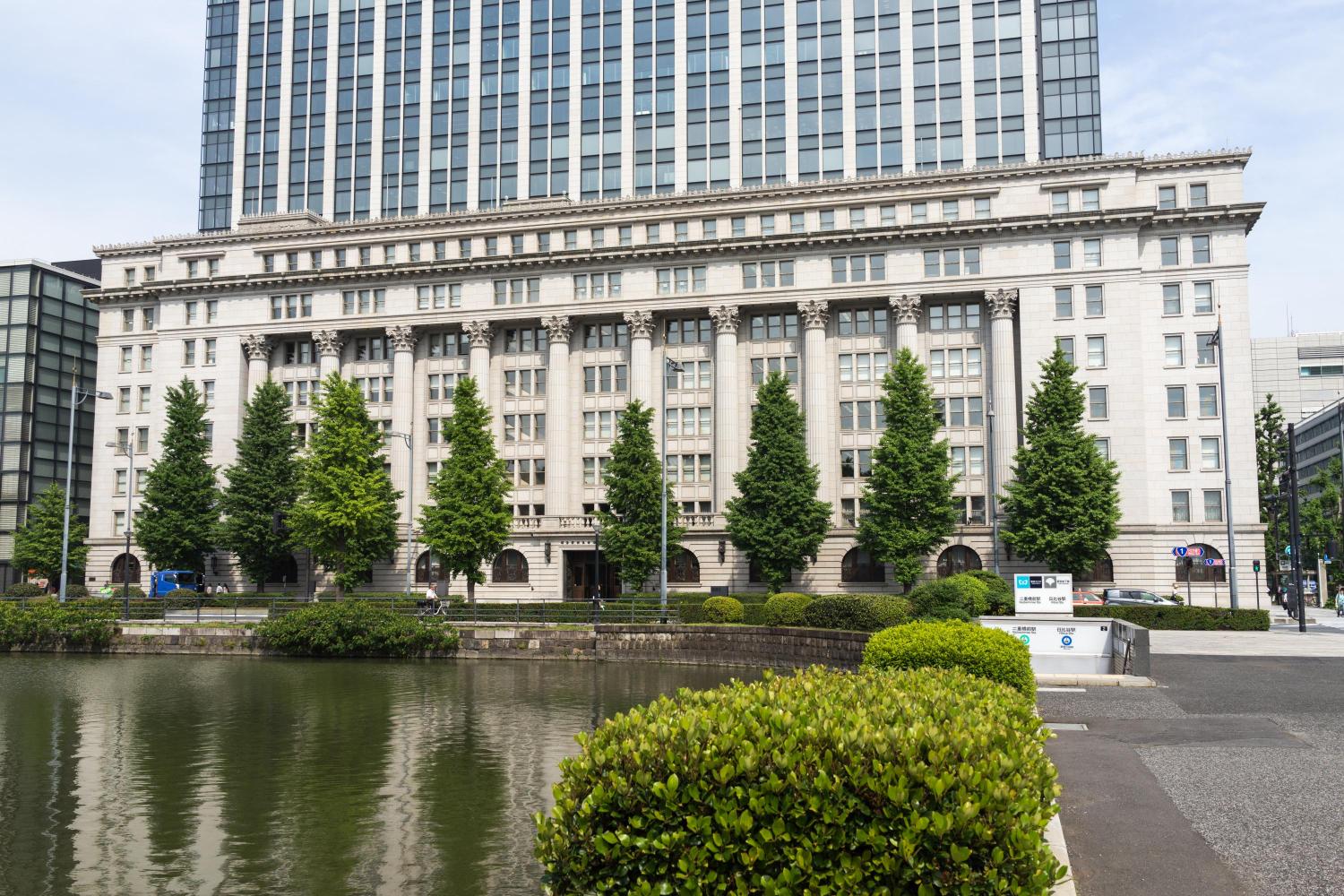 The Dai-ichi Life Building was designed by Jin WATANABE and Yosaku MATSUMOTO and completed in 1938. It was a neoclassical style building, but it features simple design, for example the colonnades were bare of ornament. After the war, there was a period when it was used for the General Headquarter of the Allied Forces. The building was demolished in 1989 for a redevelopment and only the appearance is preserved. 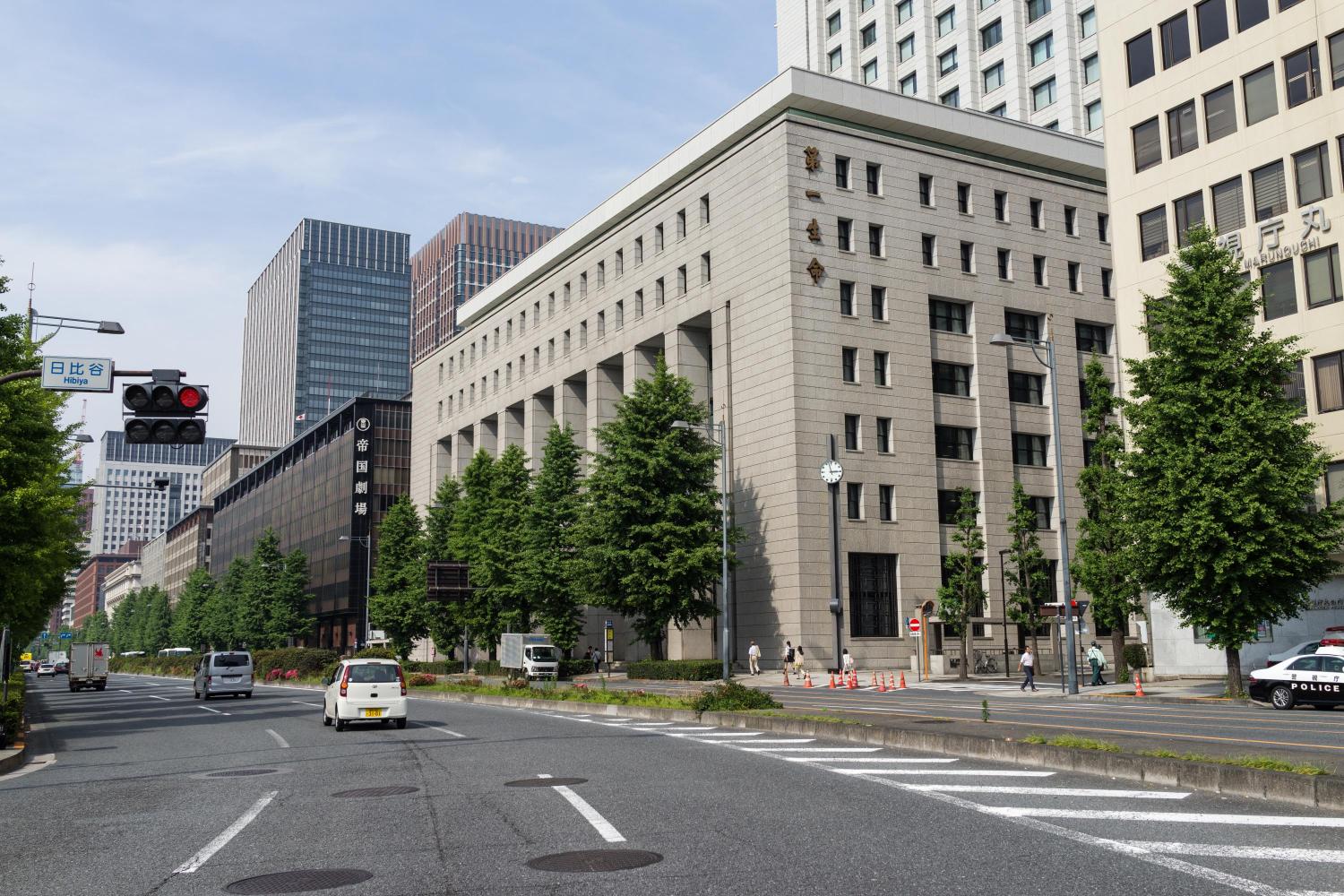 Marunouchi is an area where modern architectures such as Tokyo Station and the Meiji Life Building are preserved and at the same time redevelopment proceeds rapidly in recent year, so you can see the contemporary Tokyo. Originally it was a business district, but tenants for commercial purposes have started to operate in the building appearing by redevelopment, and it has become a district where you can enjoy shopping, eating and drinking. Trees are planted orderly along Naka Dori Street running through north to south in Marunouchi, and there are a lot of worldwide well-known brand stores. The main commercial facilities are Marunouchi Building, Shin Marunouchi Building, Marunouchi OAZO, KITTE, Marunouchi BRICK SQUARE and so on. 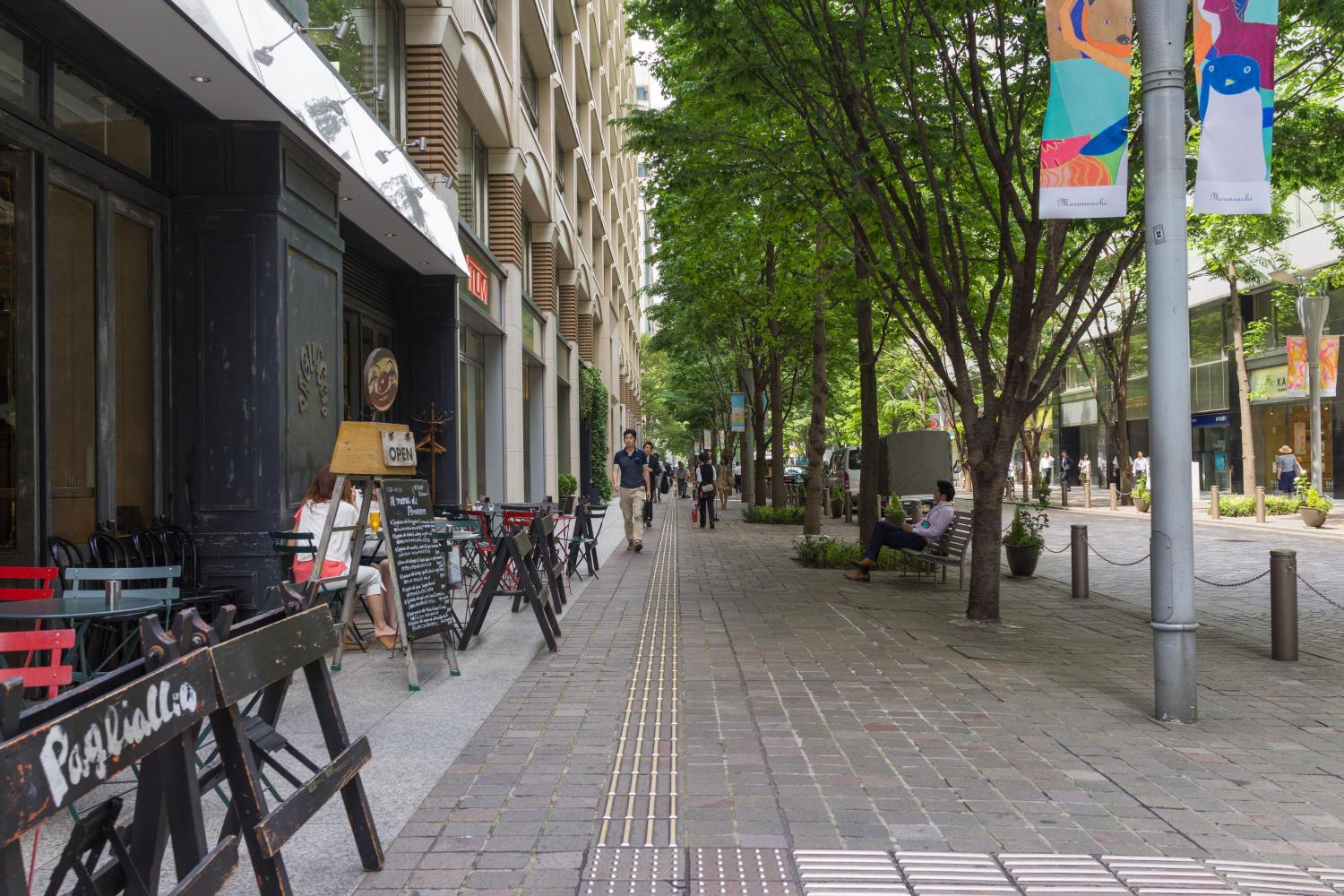 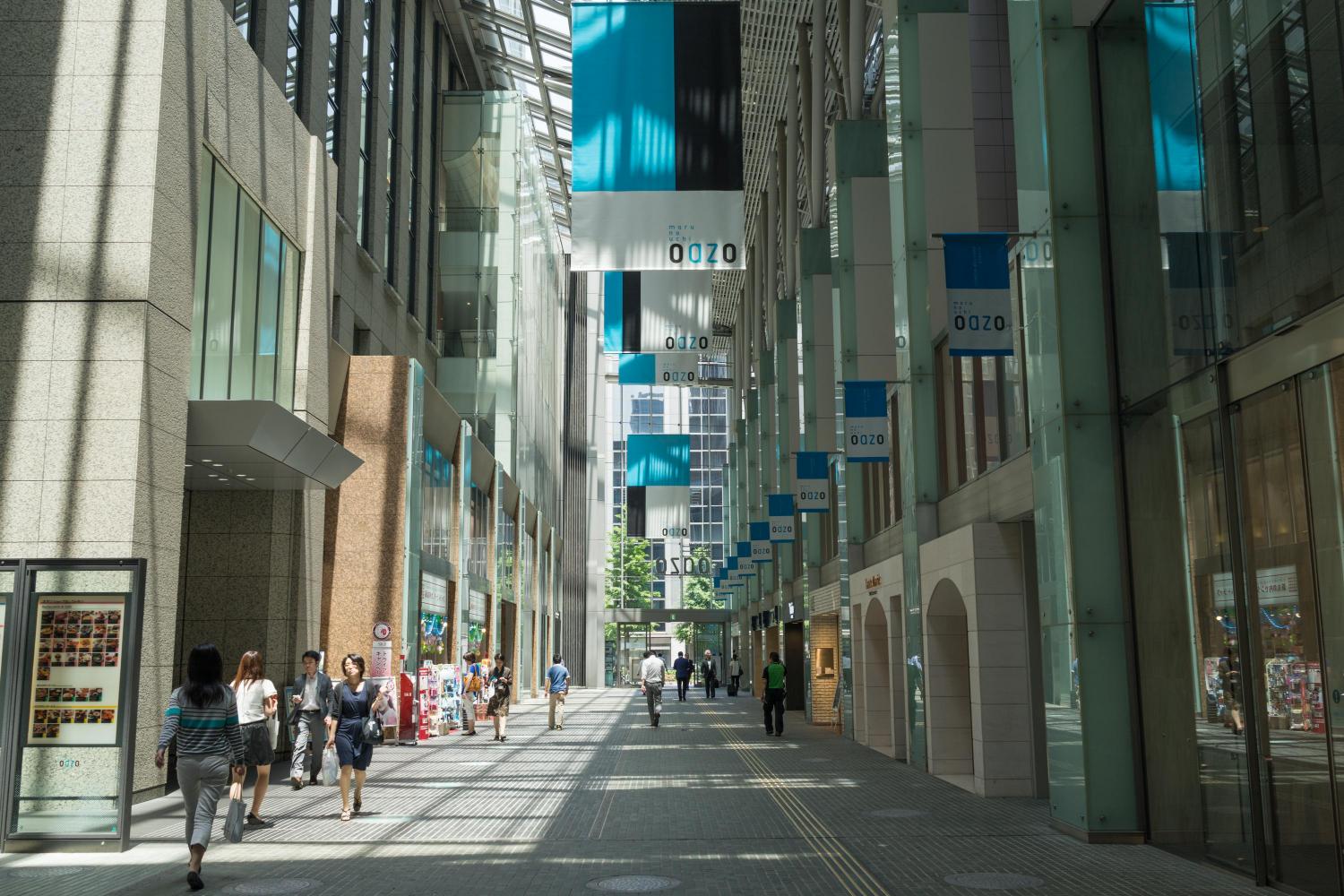 Gyoko Street, which connects the Imperial Palace and Tokyo Station, has beautiful gingko trees and is wide, so you can get refreshing feeling. The view of Tokyo Station from the street is wonderful in particular. 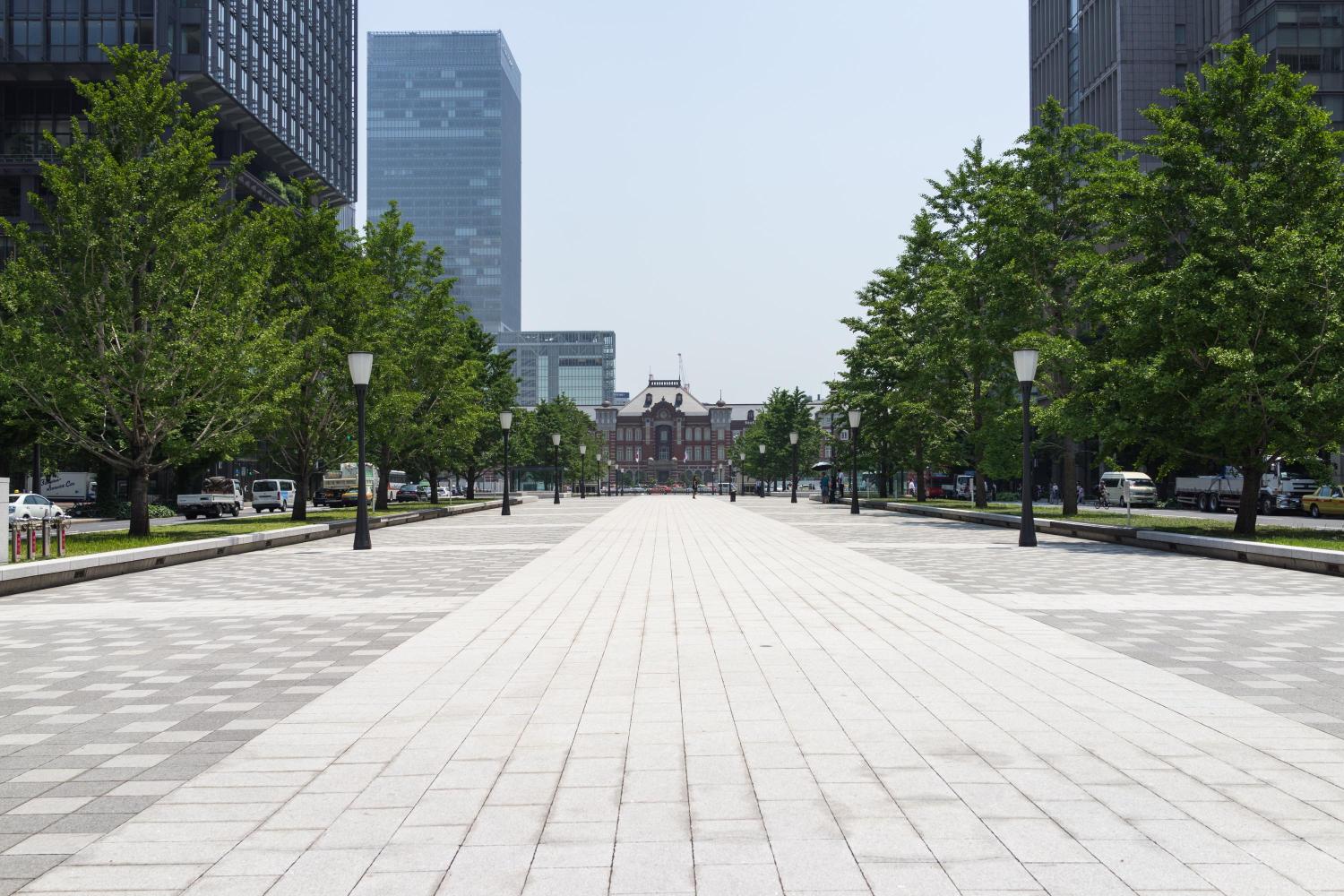 The view of Tokyo Station from Gyoko Street

I recommend you walk around Marunouchi with the Imperial Palace where you can see the remains of the former Edo Castle.