The East Garden of the Imperial Palace: a beautiful Japanes garden 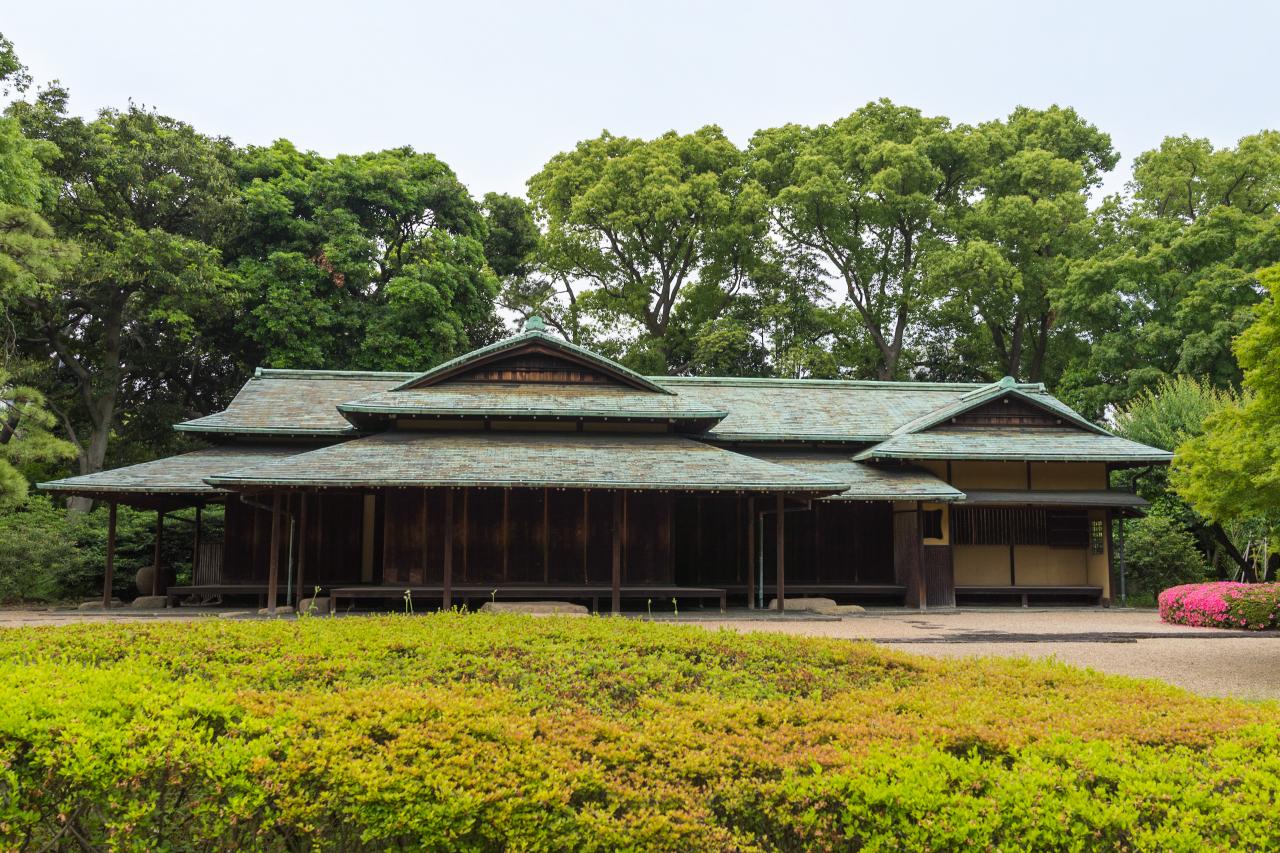 The East Garden of the Imperial Palace is located the east of the Imperial Palace and under the jurisdiction of the Imperial Household Agency. It is open to the public for free in the daytime except Monday, Friday and Year-end and New Year holidays. You can enter the garden through 3 entrances; Otemon Gate, Hirakawamon Gate and Kitahanebaschimon Gate. There are the remains of the former Edo Castle such as gates, bansho (gurde house) and stonewalls, Ninomaru Garden, a grove, etc. The site of Honmaru is now a large lawn field and familiar to citizens as a relaxing place.

The place was once the center of the former Edo Castle and there were the castle tower, Honmaru (the castle’s keep), Ninomaru (second bailey), Sannomaru (third bailey) and so on. After the Emperor Meiji moved to the present Imperial Palace, facilities related to the Imperial family and the Imperial Household Agency were built there. It was open to the public in 1968 and became a popular sightseeing spot.

The castle tower was burnt down in the Great Fire of Meireki in 1657 and after that it was not reconstructed and there remains only the foundation. It was used as the final strongpoint but it became unnecessary because peace came to Japan by the rule of Edo Bakufu (Shogunate government) in these days. Masayuki HOSHINA, a cabinet official of the Shogunate thought the government should put the restoration of Edo (the former name of Tokyo) city before everything else and it was not rebuilt. 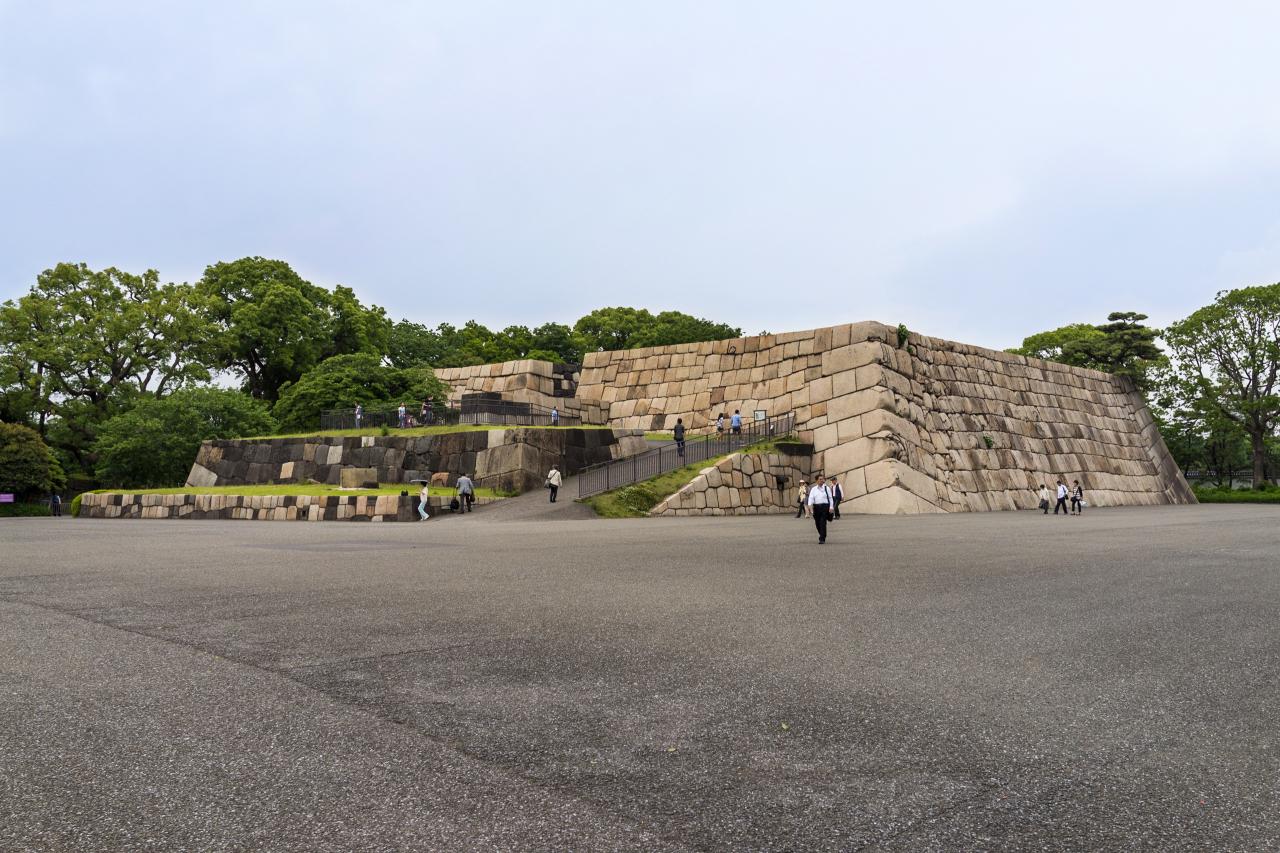 The foundation of the castle tower

Honmaru was the place where the Shogun (the hereditary military dictator of Japan) and government officials of the Shogunate carried out political affairs and also the Shogun, his wife and maids lived. After burnt down in 1863 it was not rebuilt to this day. The place Honmaru was located is now a large lawn field. 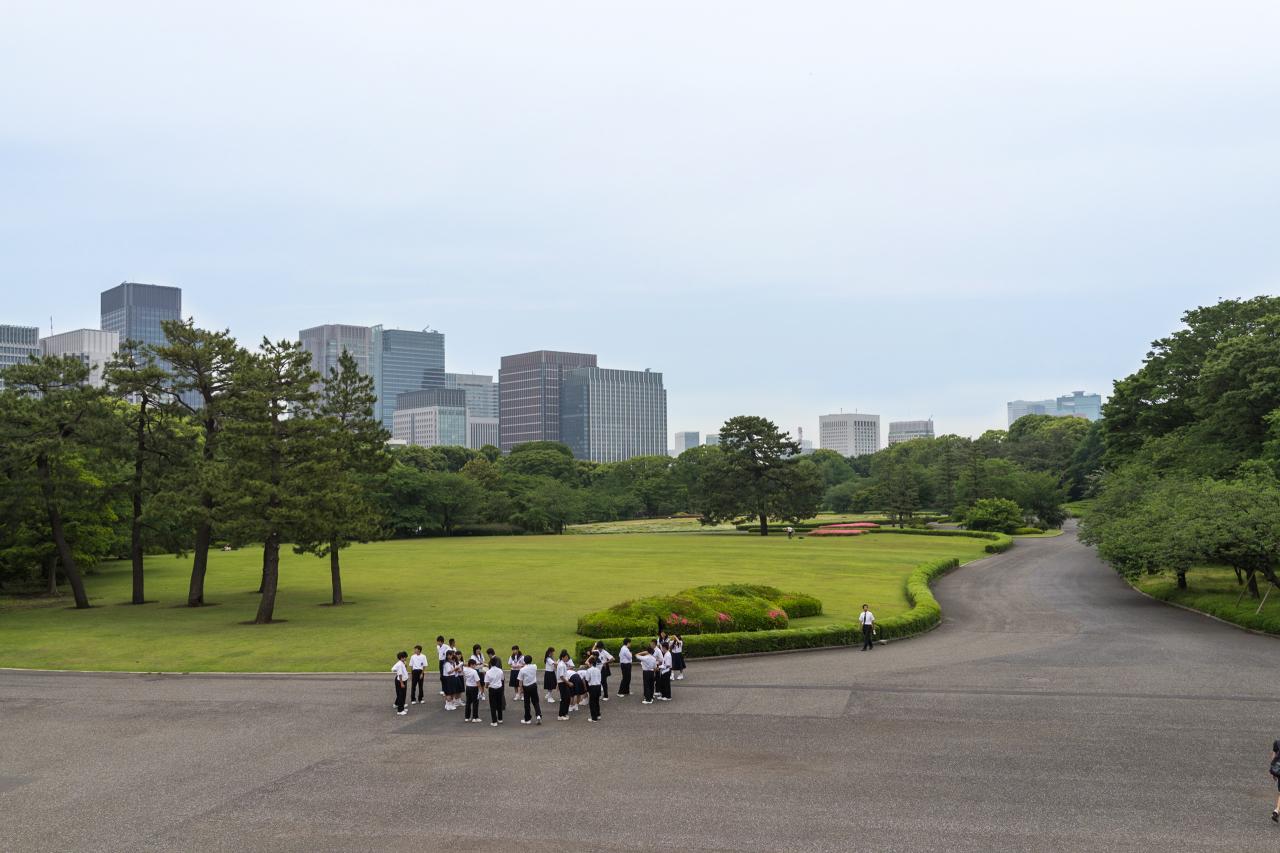 The site of Honmaru 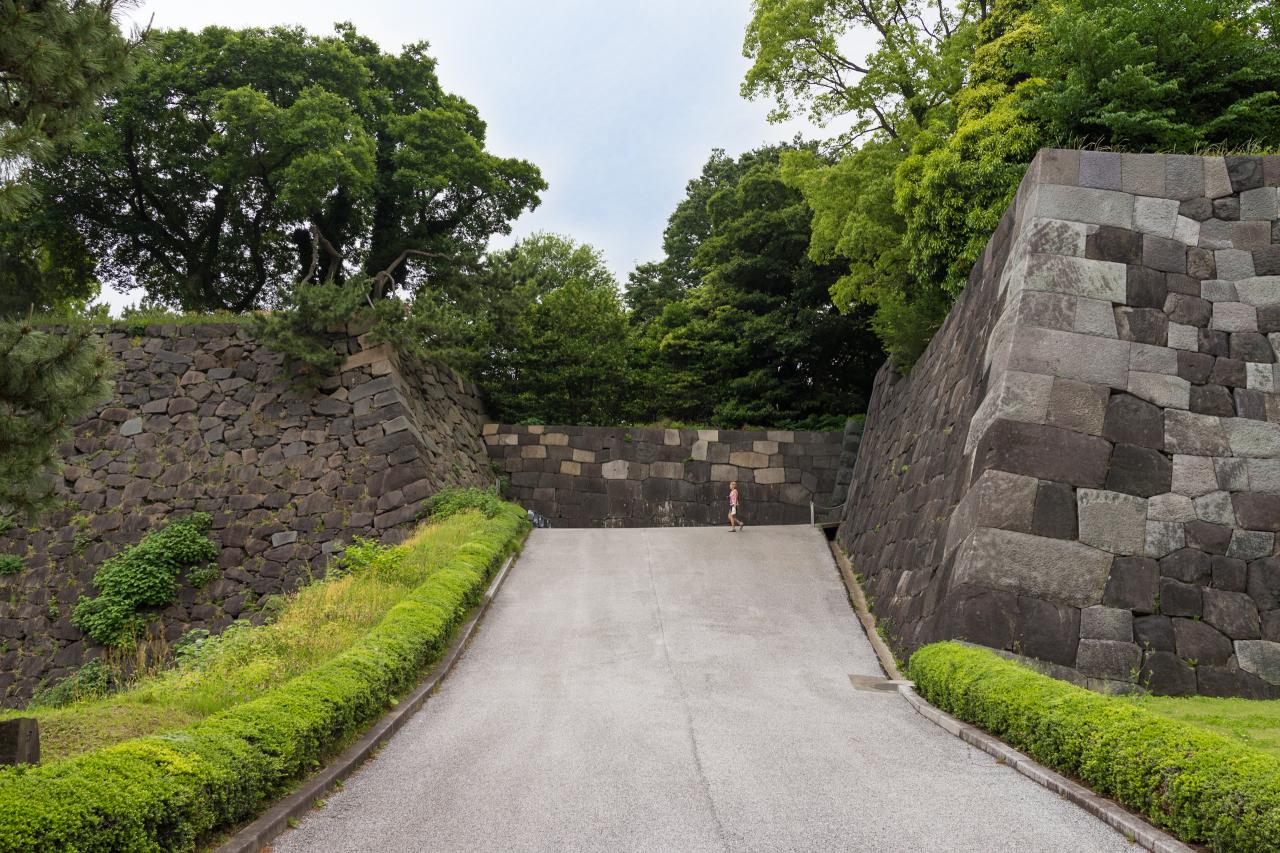 Ninomaru was the place a villa of the Shogun and a palace of his heir were located. A garden and teahouses were also built there. The buildings were burnt down in 1863 and they were not rebuilt after that. When The East Garden of the Imperial Palace was open, Ninomaru Garden was built based on the drawing of a garden that was created in the era of the ninth Shogun, Ieshige TOKUGAWA (1745 - 1760). It is a beautiful garden having a pond in the center. Suwano-chaya Tea House near Ninomaru Garden was once located in Fukiage Garden of the Imperial Palace and rebuilt in 1912 and relocated to the present place according to the open. It is an elegant Japanese architecture. A grove nearby was created from 1982 to 1985 in accordance with the wish of the Emperor Showa to preserve disappearing nature. 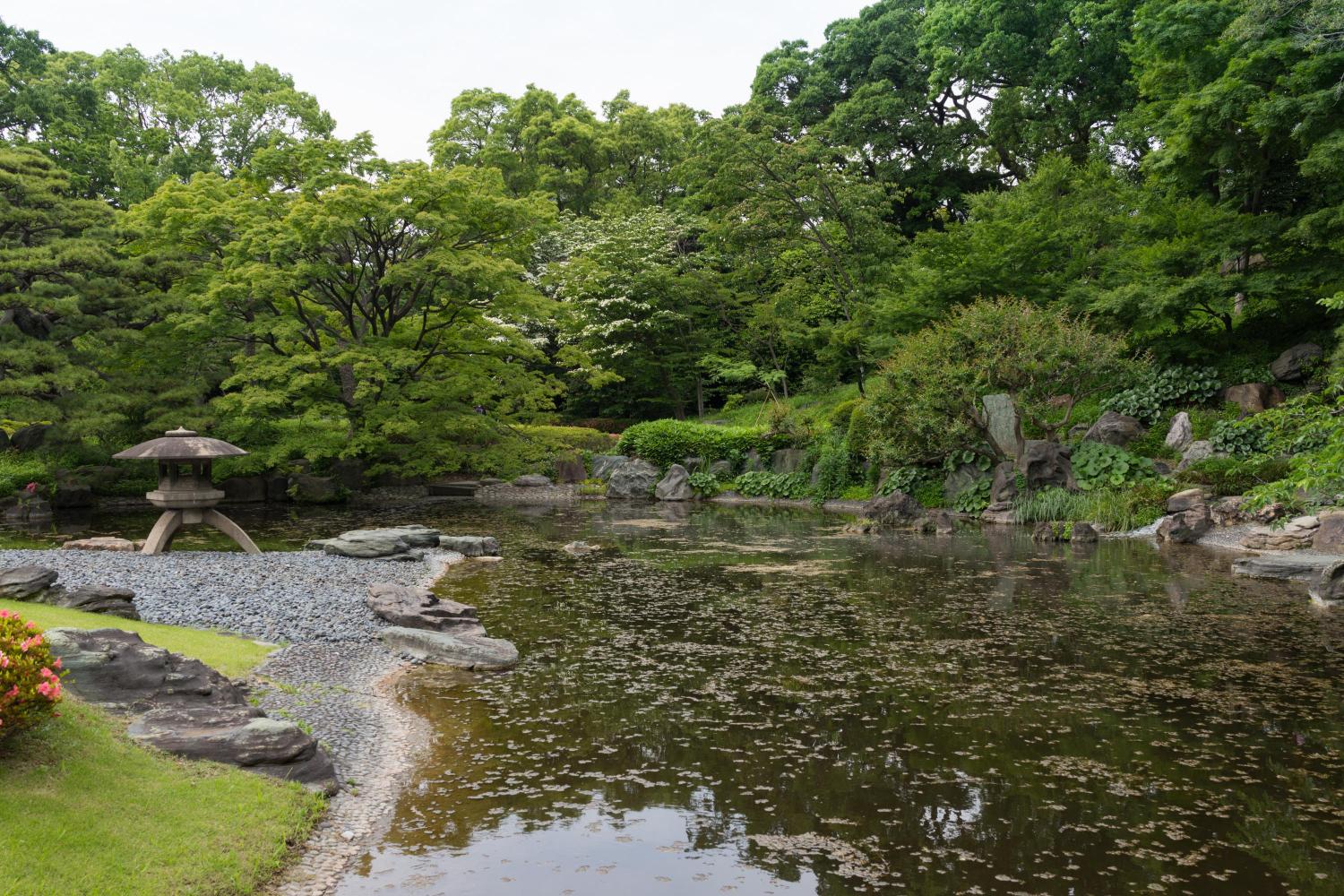 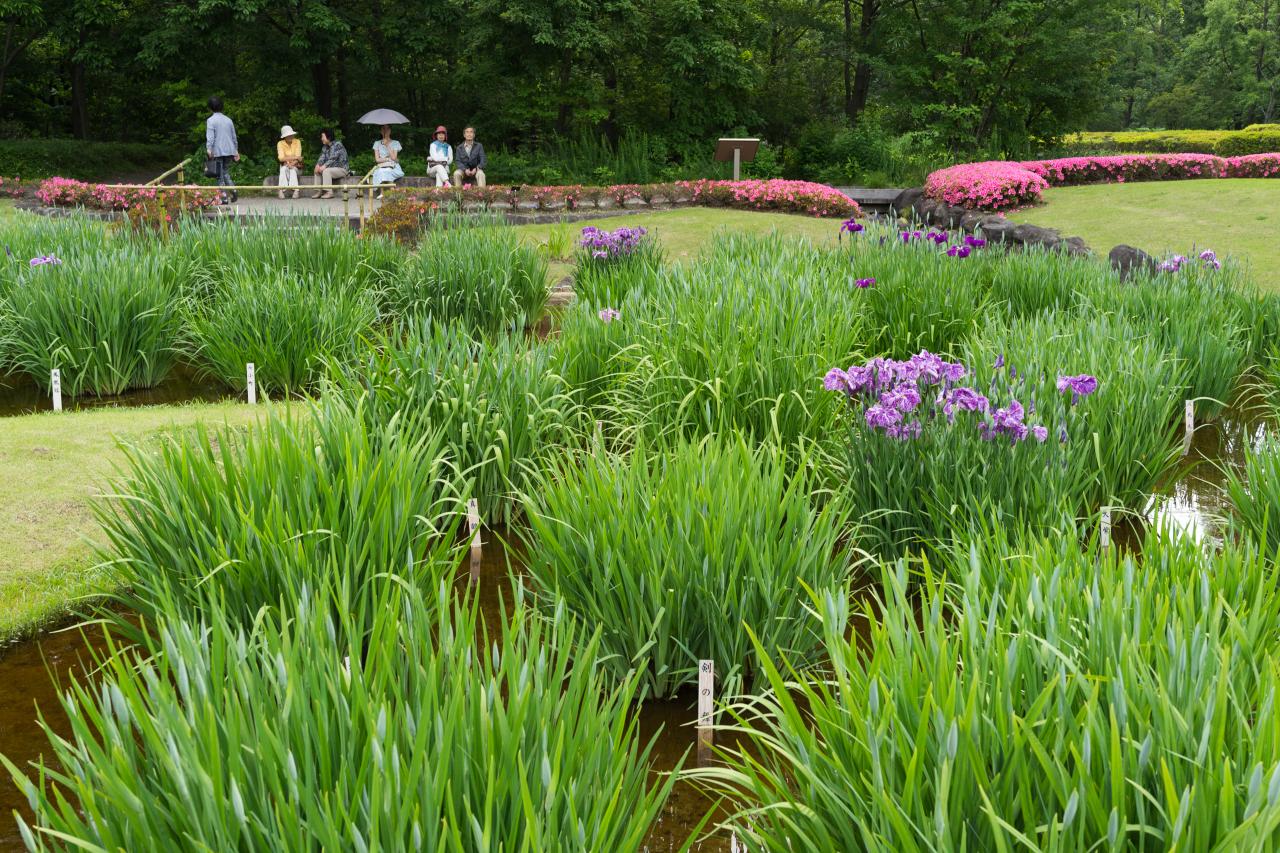 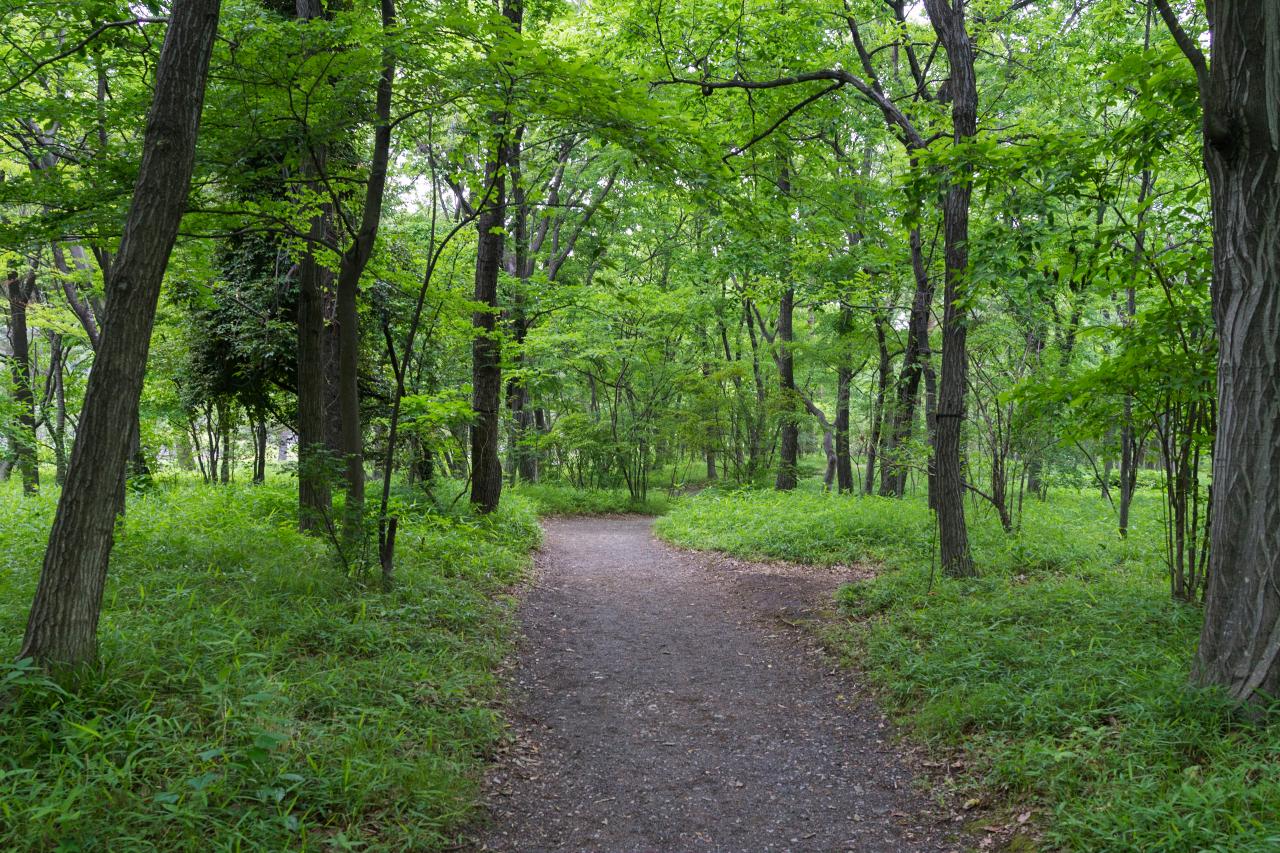 Sannomaru was open area except the treasury and a small palace, and it was used as a waiting place for retainers of Daimyo (a feudal lord) who accompanied Daimyo when he went to Edo Castle. Now there are facilities related to the Imperial family and the Imperial Household Agency. You can enter the place except Otemon Gate and Sannomaru Shozokan (The Museum of the Imperial Collections). Sannomaru Shozokan is a facility for research, preservation and exhibition of the works of art, which were donated by the Imperial family, and was opened in 1993. No admission fee is required.

Along the road to Honmaru from Otemon Gate, there are tree bansho (guard house); Doshin Bansho, Hyakunin Bansho and O Bansho. They are remains of the Edo Castle that have survived since the Edo period (1603 - 1868). In particular, Hyakunin Bansho was the largest checkpoint of the castle, which was over 50 meters long. 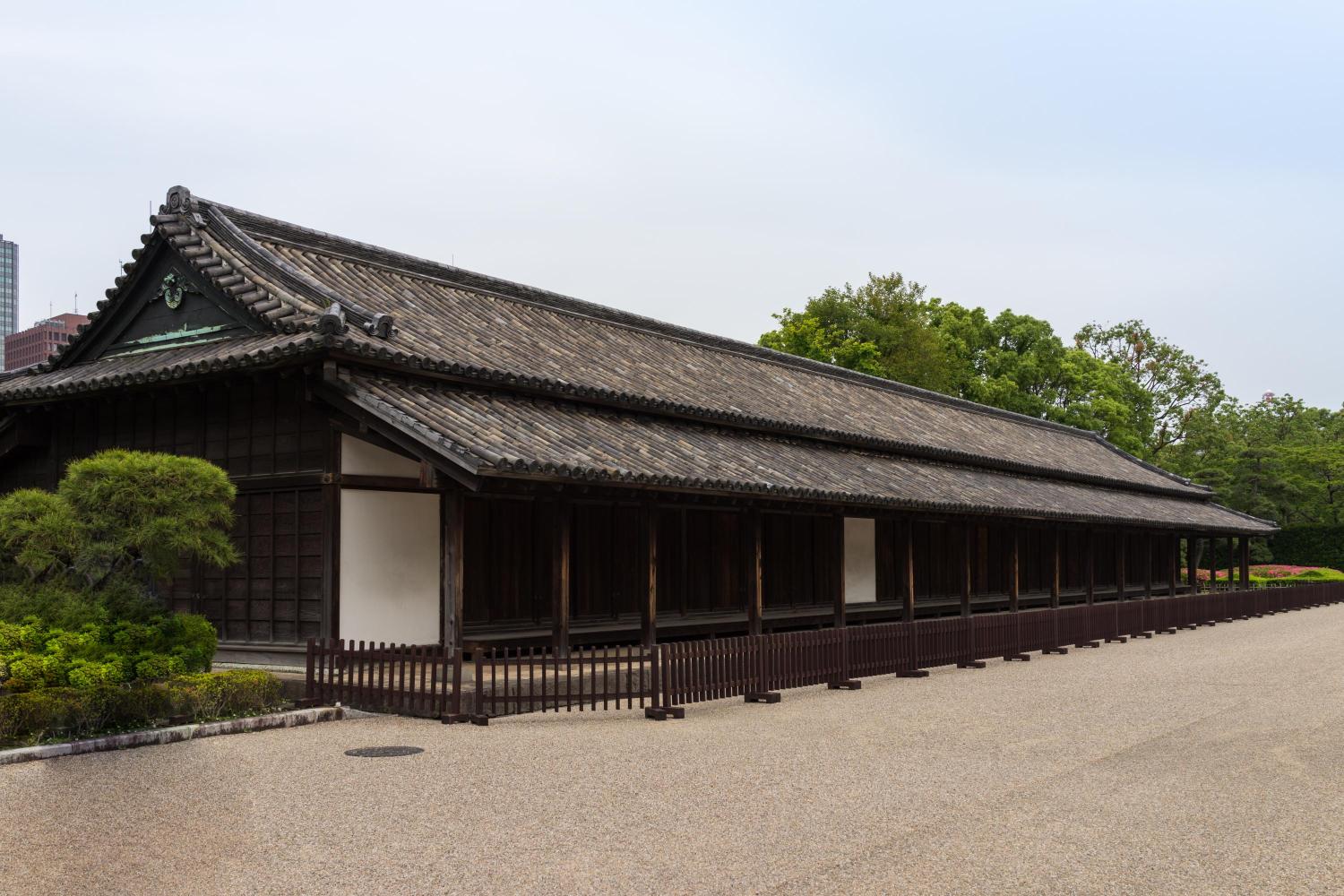 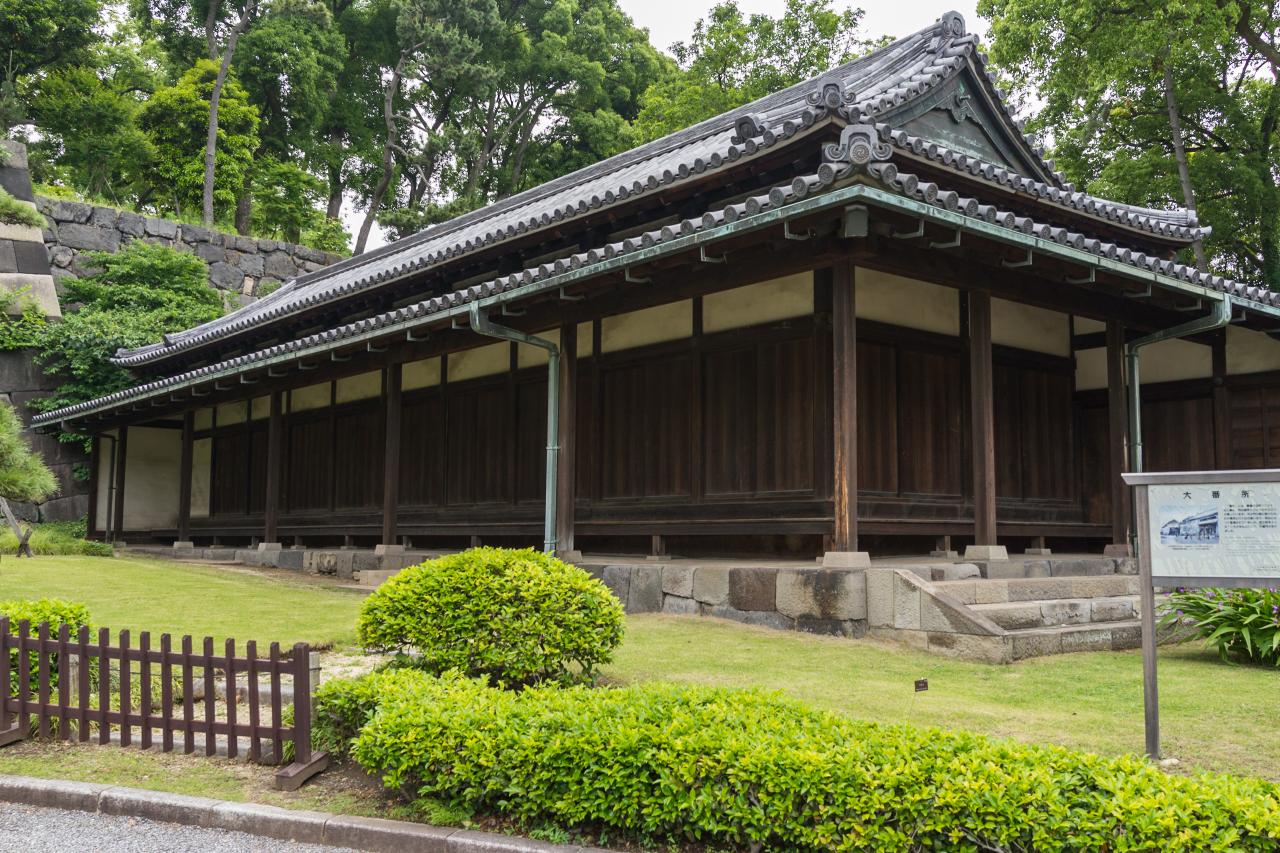 Also Otemon Gate, Hirakawamon Gate and Kitahanebaschimon Gate, which are the entrance of the East Garden of the Imperial Palace, are valuable remains. Otemon Gate was once the main gate of the former Edo Castle. In 1620 it became square-shaped as it is now. After that it was repeatedly rebuilt and repaired, but it was burnt down by fire due to the air raid in the World War . The current gate was rebuilt in 1968. Hirakawamon Gate was once the main gate of Sannomaru. It is a square-shaped gate and forms beautiful scenery with a wood bridge. It was built in 1635 but destroyed by the Great Kanto Earthquake in 1923 and rebuilt later. Kitahanebaschimon Gate was an important gate, which was located at the back of the castle tower, so the moat was deep and the stonewall was solid. It was once square-shaped, but now only the koraimon gate remains. 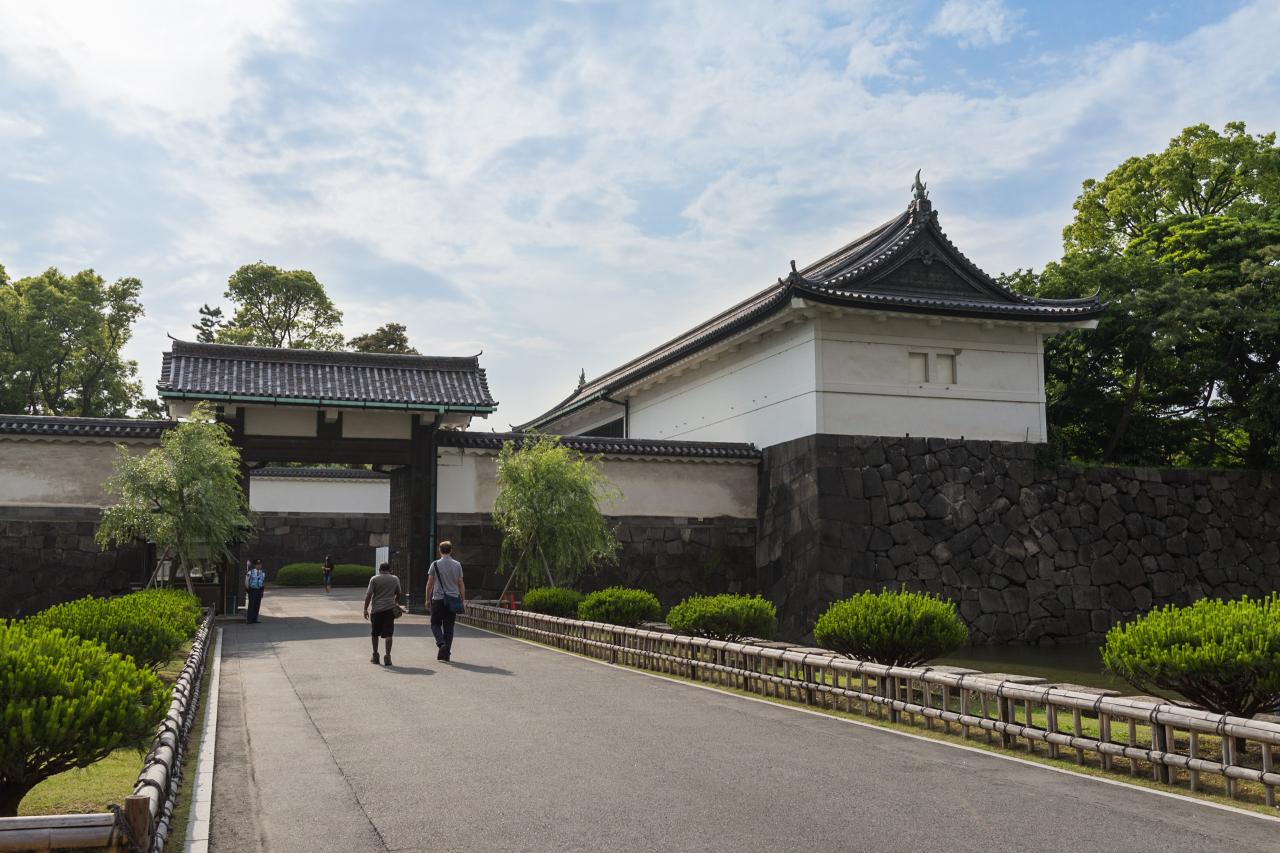 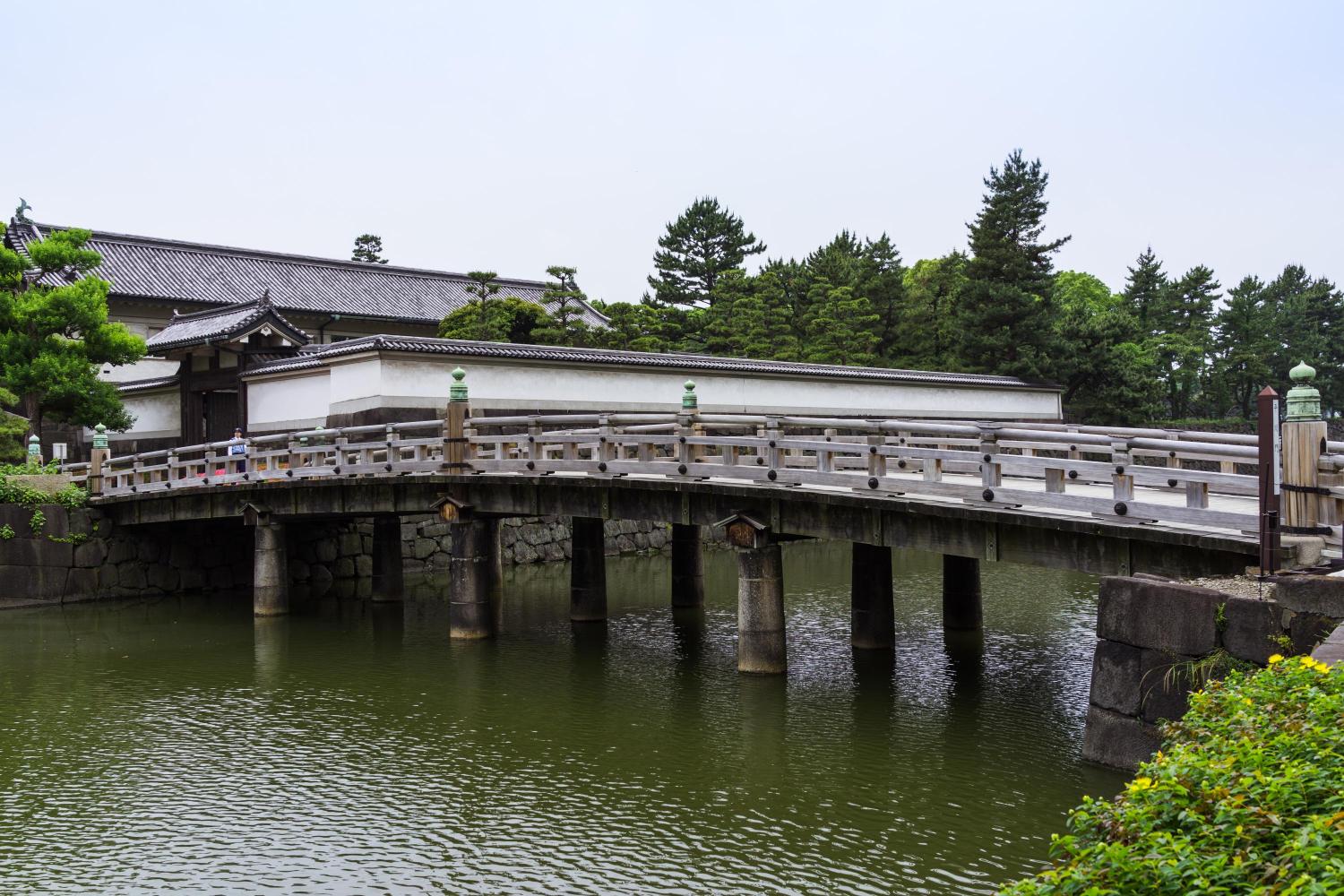 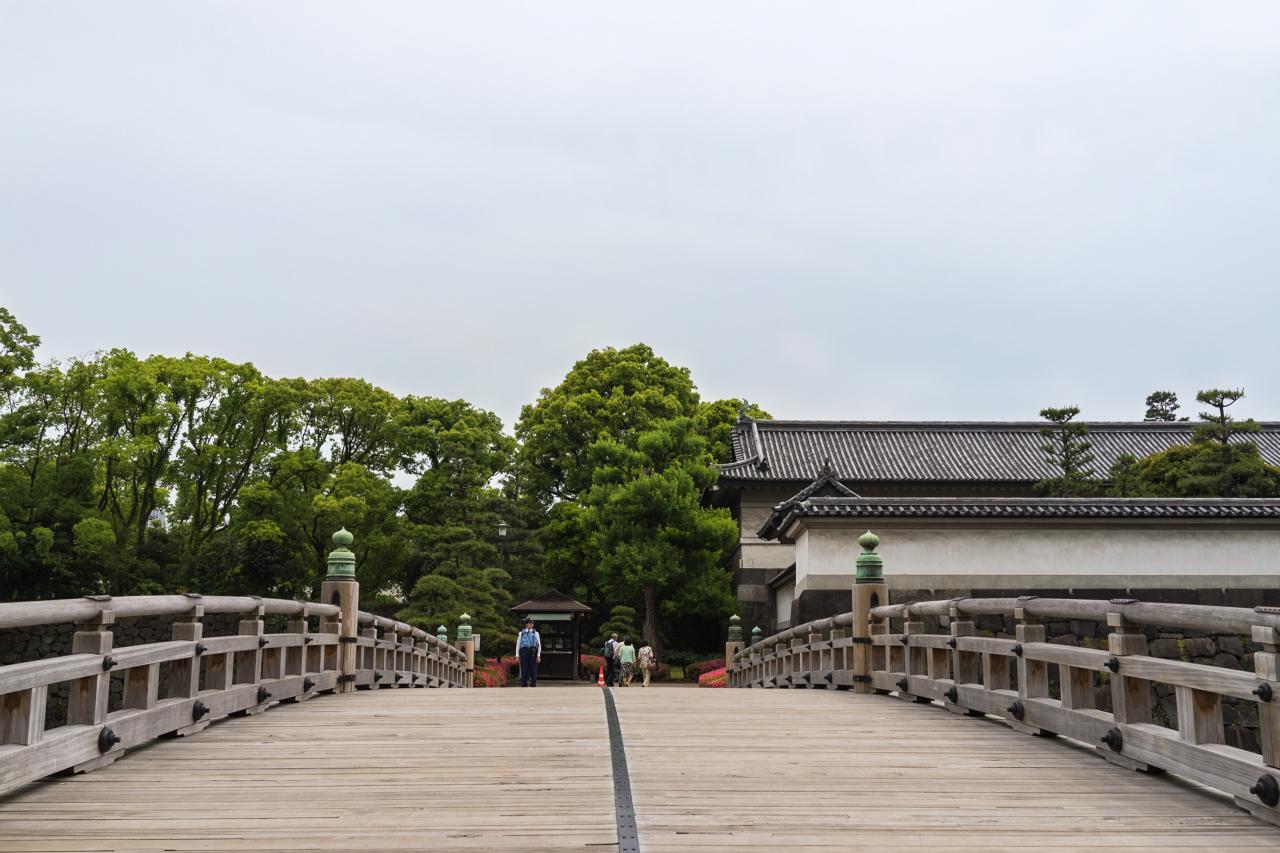 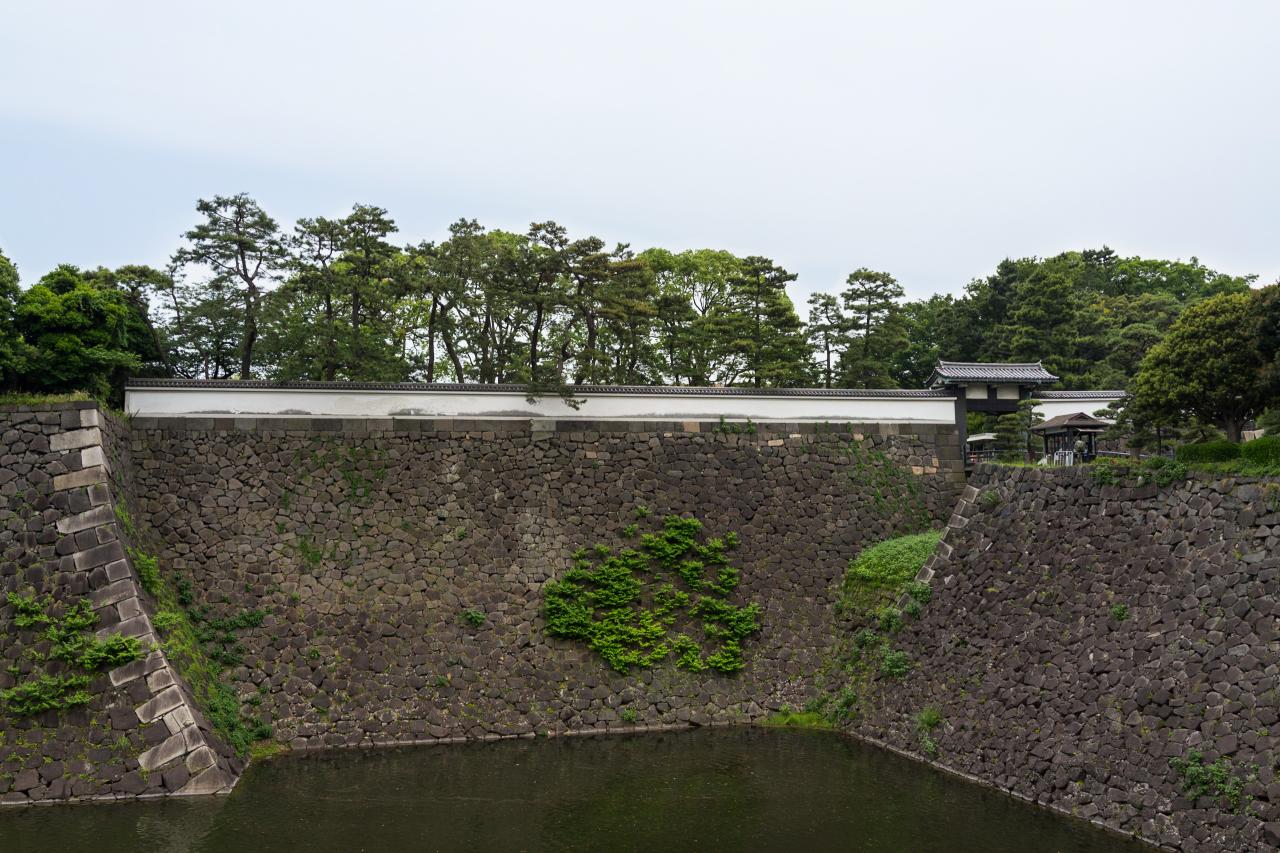 The outer garden of the Imperial Palace
https://www.ambassadors-japan.com/en/tokyodailylife/322/

Chidorigafuchi Moat and other moats
https://www.ambassadors-japan.com/en/tokyodailylife/325/