Hi, I’m Yuichi.
I was raised in Yokohama and now living in Tokyo.
I like traveling by train and have ridden many kinds of trains in Japan.
I would like to introduce the attraction of railway travelling in Japan based on my experience.

The attraction of Enoshima Electric Railway a.k.a. Enoden

The sightseeing spot, Enoshima- Kamakura area, is easy to go to from Tokyo and so popular among Japanese. This area is highly recommended. There are many historic temples, shrines, nice restaurants and cafes. You can also feel nature like the beaches and the mountains. 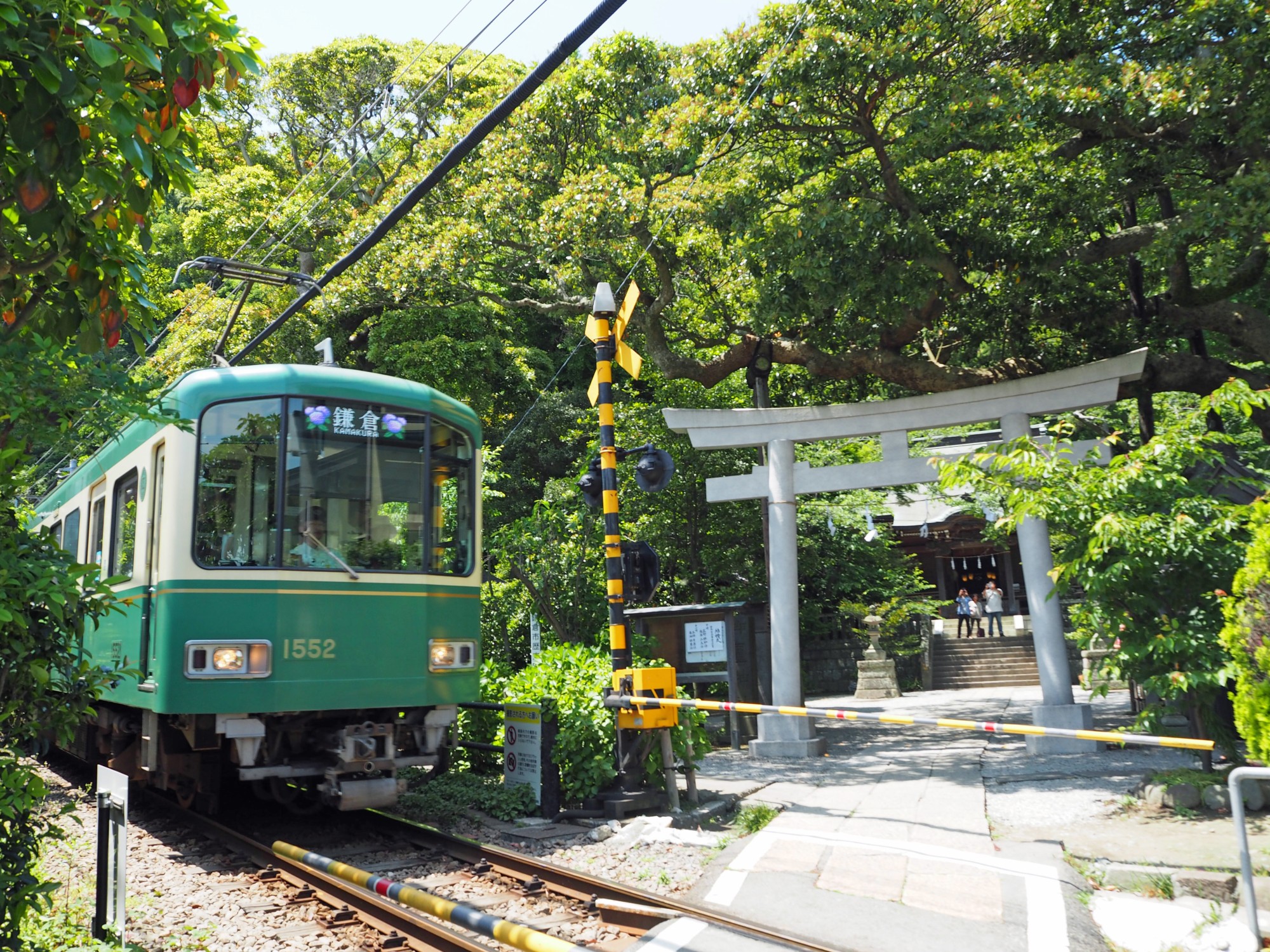 Enoshima Electric Railway slowly covers the 10km distance in 34 minutes between kamakura station and Fujisawa station. You can get off at Hase station to see the famous sightseeing spots, Hase Kannon temple and the Kamakura’s Great Buddha. You can also get off at Enoshima station, the entrance of Enoshima Island. It has been running for over 100 years since the first section opened in 1902.
Enoshima Electric Railway is the official name but we call it “Enoden”. 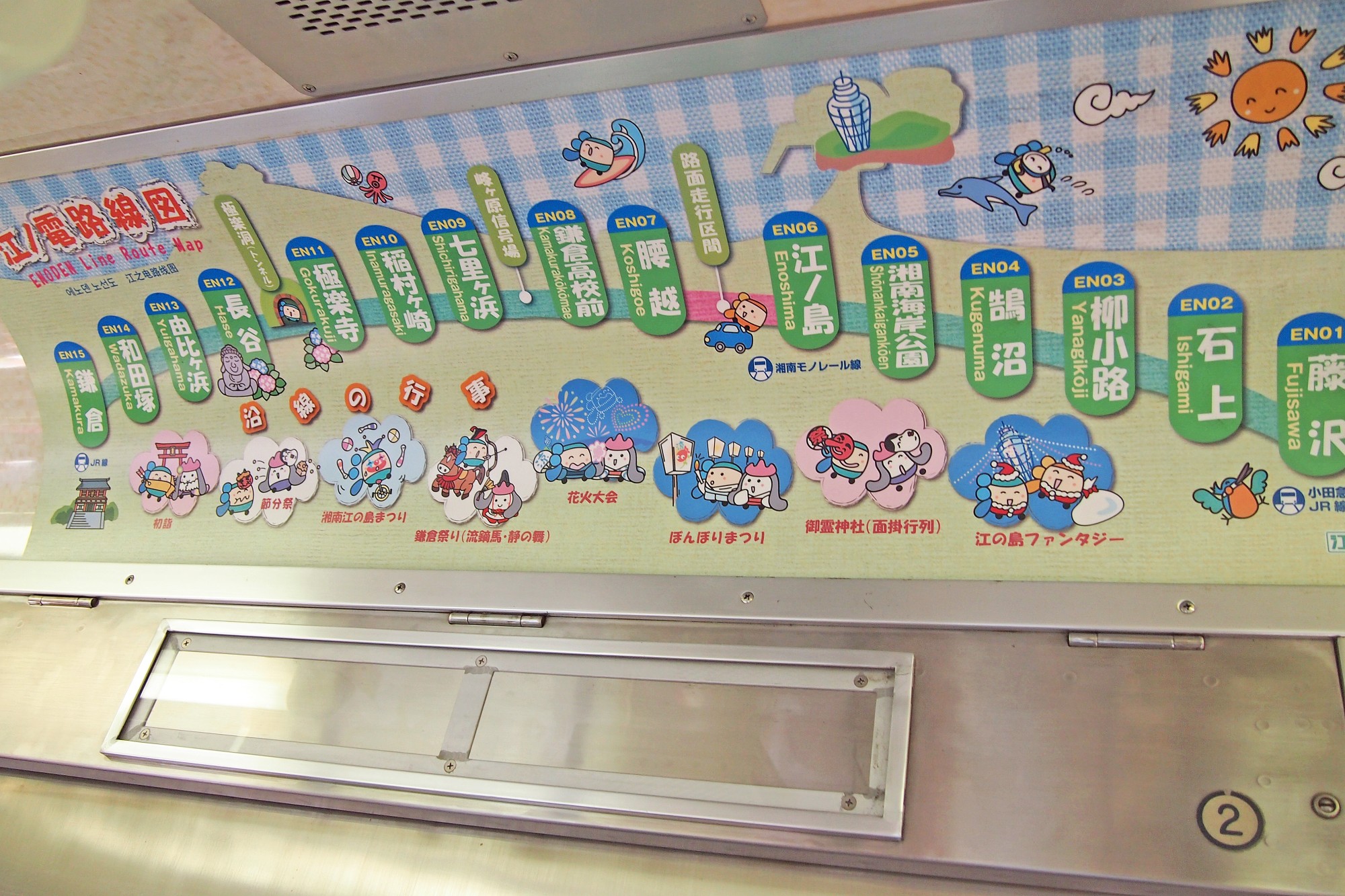 The fascination of Enoden~ the various sceneries~

The most fascination thing of Enoden is definitely the various sceneries.
It’s really fun to see the view from inside of the train, or the train itself by walking along the railroad.
I tell you those views from Kamakura station to Fujisawa area. 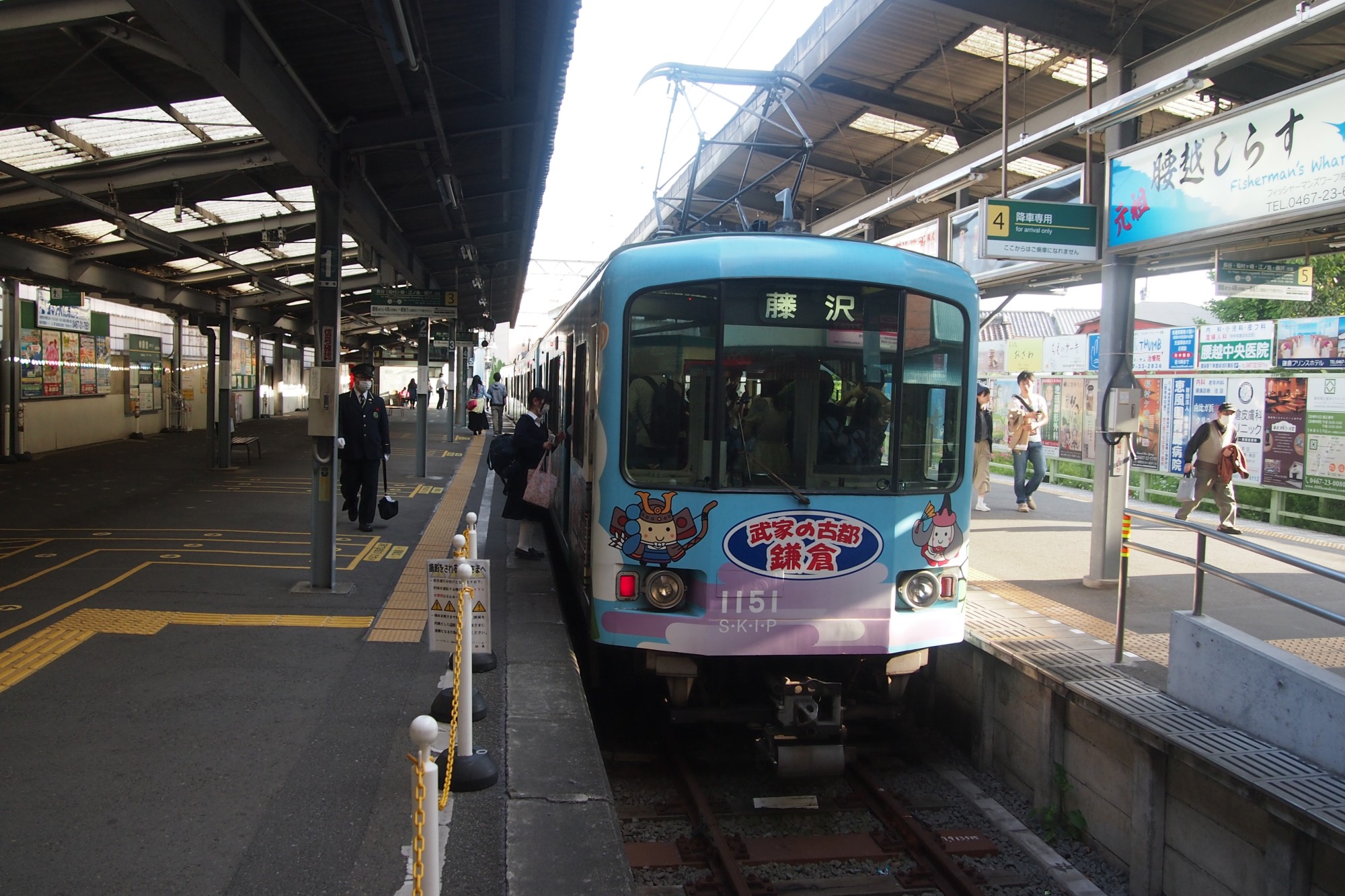 The train before departing from Kamakura station

The third stop from Kamakura is Hase station. There are the Kamakura’s Great Buddha and Hase Kannon temple. It’s a wooden made and a retro styled station. After passing Hase station, it gets through the residential neighborhoods then passes through the nature of Kamakura.
It runs right in front of the shrine so don’t miss it. 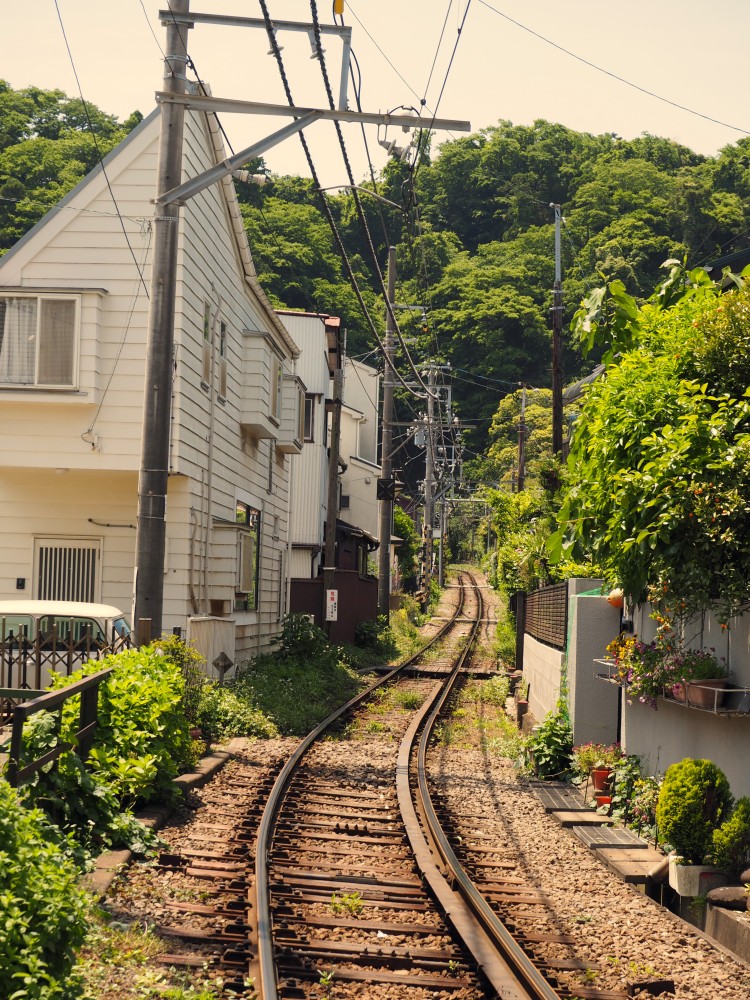 The scenery of Hase ~ Gokuraku temple

The sixth stop from Kamakura is Shitirigahama station. When the train passes, the wonderful picture of the ocean (the pacific) spreads before your eyes.
I recommend you get off at Kamakurakoukoumae station. It’s really retro designed small station but the view is amazingly open. You can see the ocean and Enoshima across from the road.
It’s really nice spot for shooting because this area is used as the sets of many dramas and anime.
If you are lucky, you can see Mt. Fuji behind Enoshima a place that is about five minutes walk to Shitirigahama station along the railway. 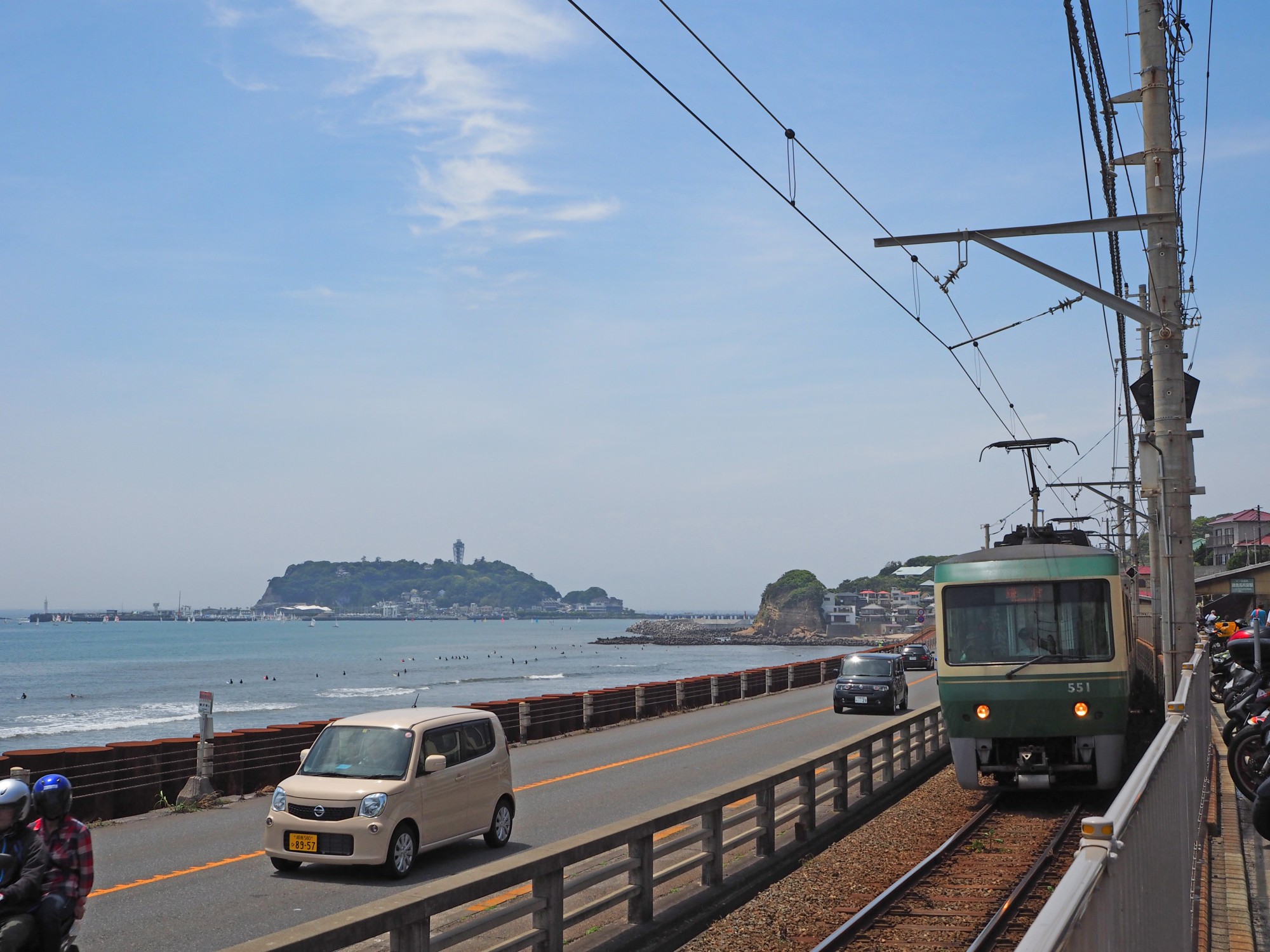 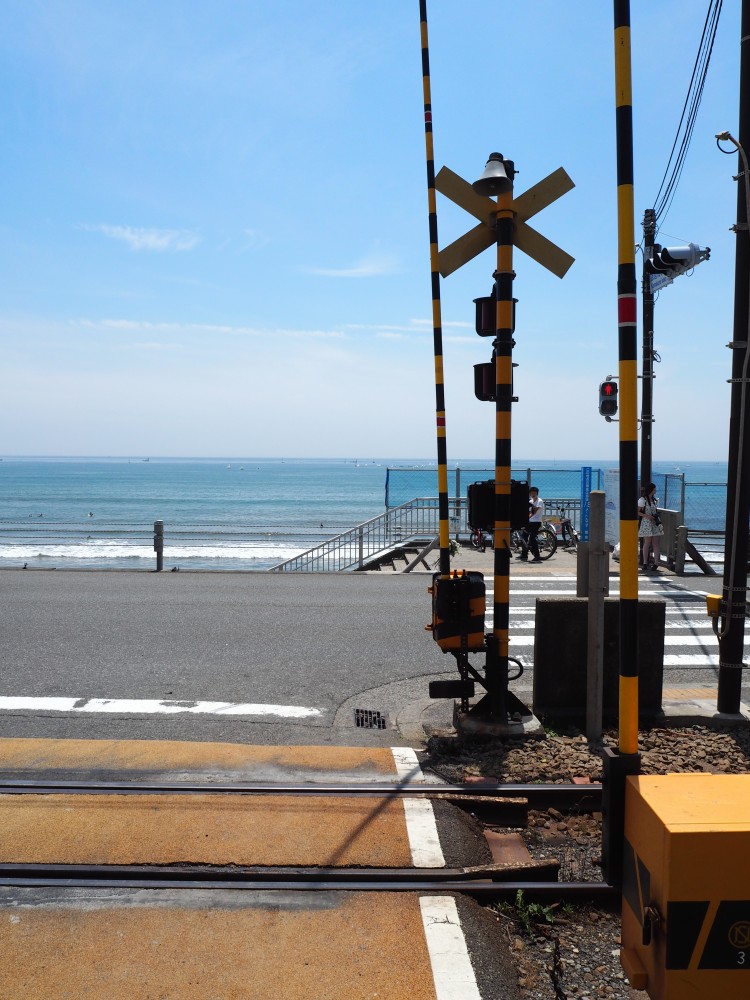 The scenery of Kamakurakoukoumae station

The eighth stop from Kamakura is Koshigoe station. After the train passes there, the railway will be the road.
Passing through the local shopping street shows you the impressive view. 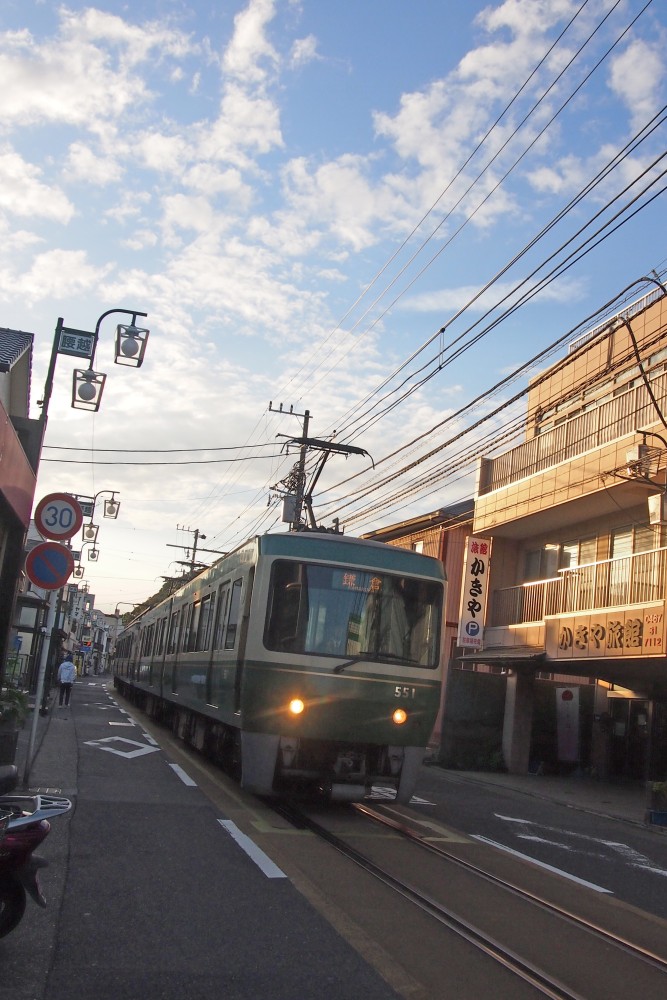 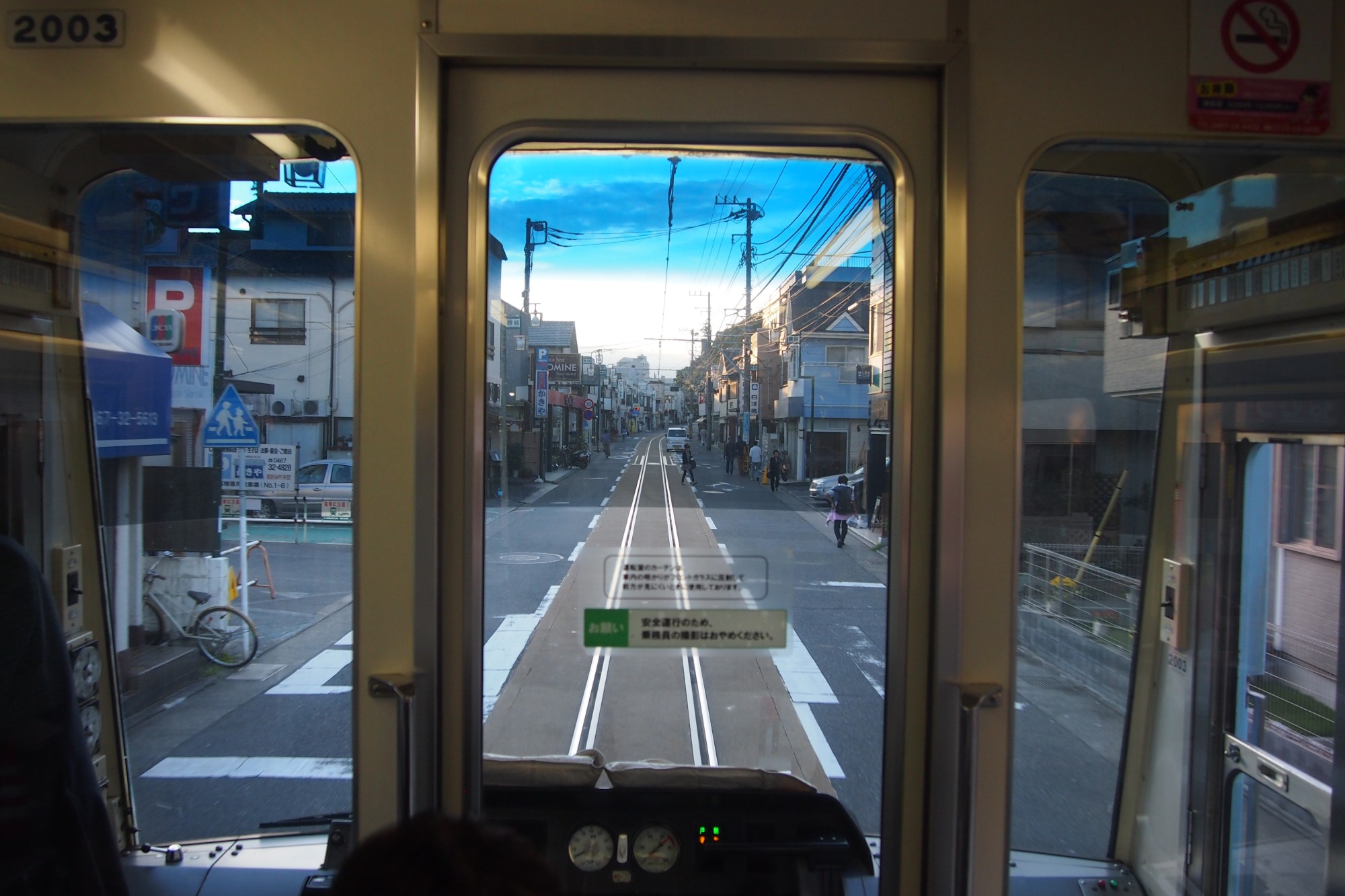 The fascination of Enoden ~the various railway vehicles~

There are six different types of railway vehicles from the retro model to the newest model. The oldest one called Type 300, has been running since 1960. The newest one called Type 500, run from 2008. One unit includes two vehicles. Most of all trains have two units, four vehicles. Let’s see which one you get. 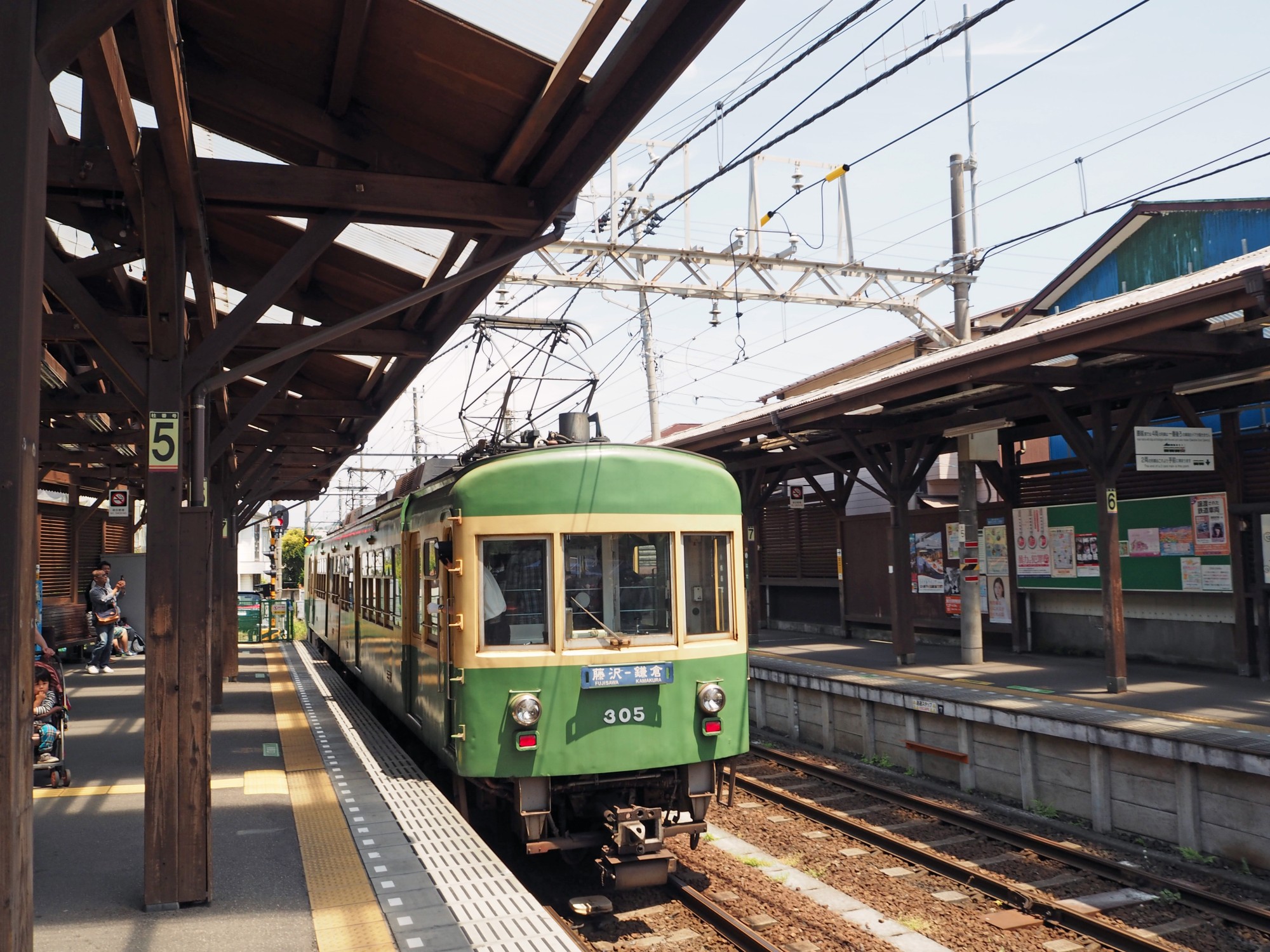 You can use cash or the IC card like Suica or Pasmo as JR lines and the others. If you break a train journey several times or use this train over three or four times for a day, we recommend you buy a reasonable and convenient one day travel pass ,Noriorikun. It costs you only 600 yen and allows you to get on and off as many as you like. 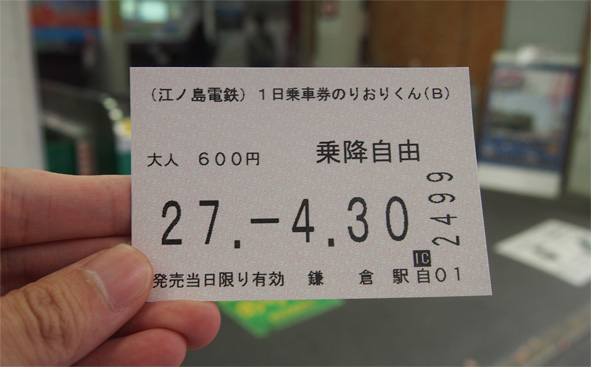 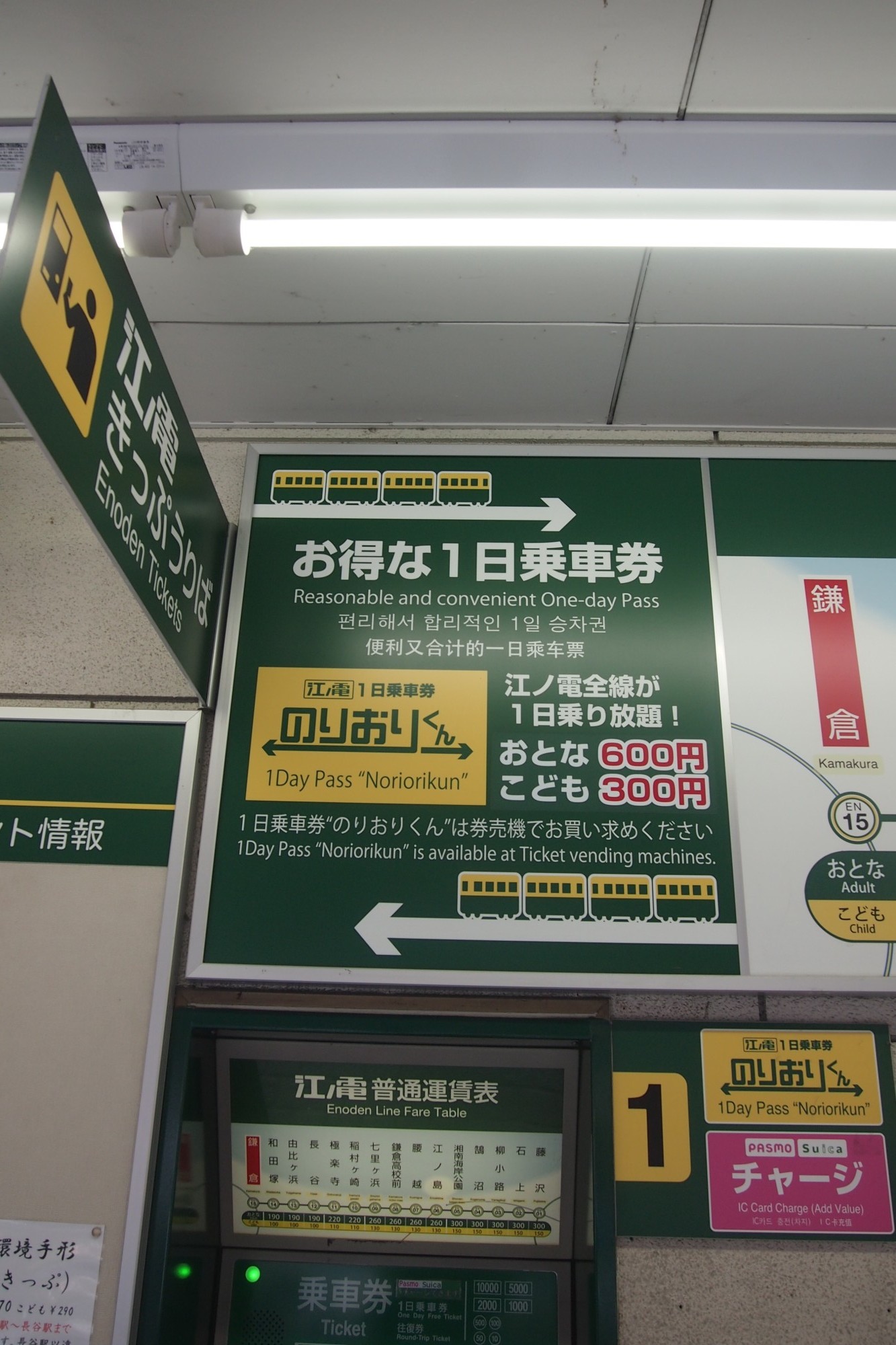 Enoden runs in 12 minutes each stations interval. It’s really good to be relaxed and wait the train but it may be convenient to remember this for breaking a journey or taking pictures. 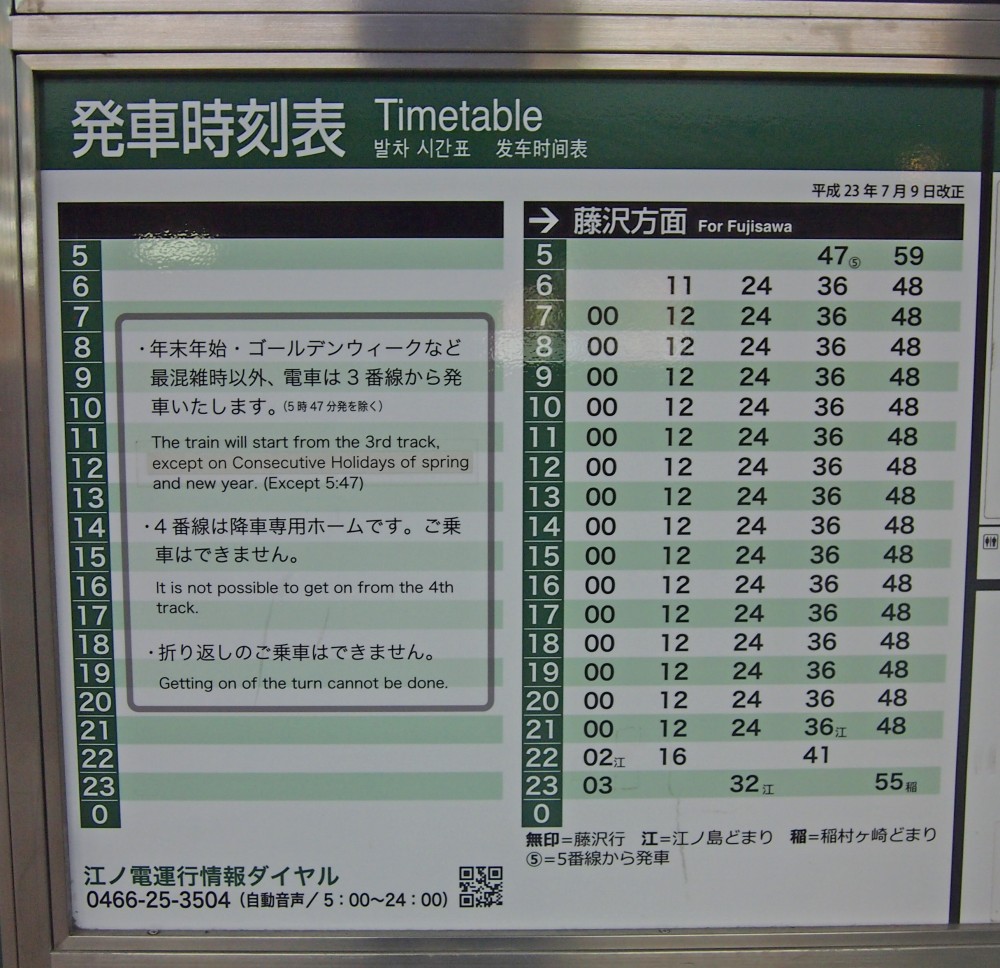 Kamakura - Enoshima areas are popular among Japanese, too. On weekends, the train is probably packed with many people. It’s really crowded especially in May, the season for going out, or in November, the season of tinted autumnal leaves. We recommend you go there on weekdays if you are available. You will have relaxed time with the local people!

There is a souvenir shop at the side of the ticket gate in Kamakura station of Enoden. You can go there before getting on or after getting off the train. They sell the local stuffs of Kamakura and Enoden items. 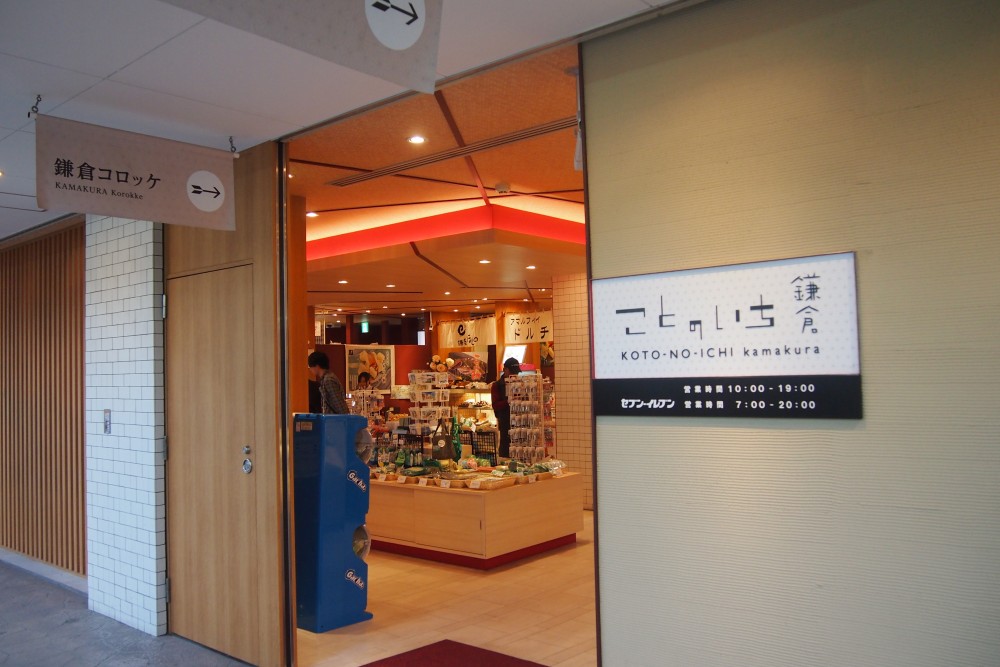 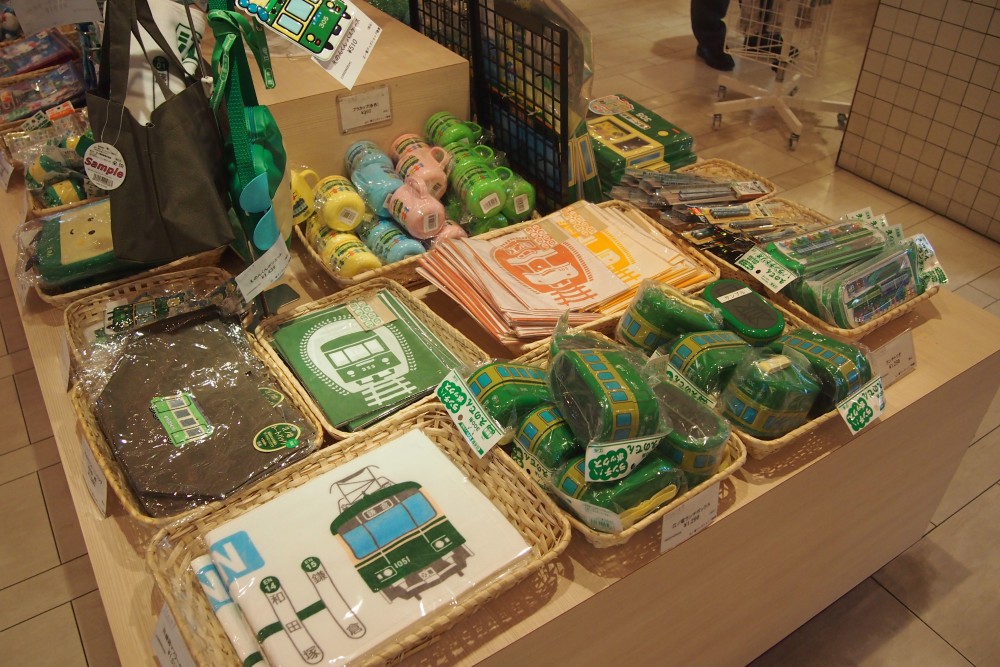 Enoden shows you various scenery in 30 minutes. It’s like an attraction of an amusement park. Please come visit Kamakura- Enoshima areas and have a pleasant time with the Enoden when you visit Japan! 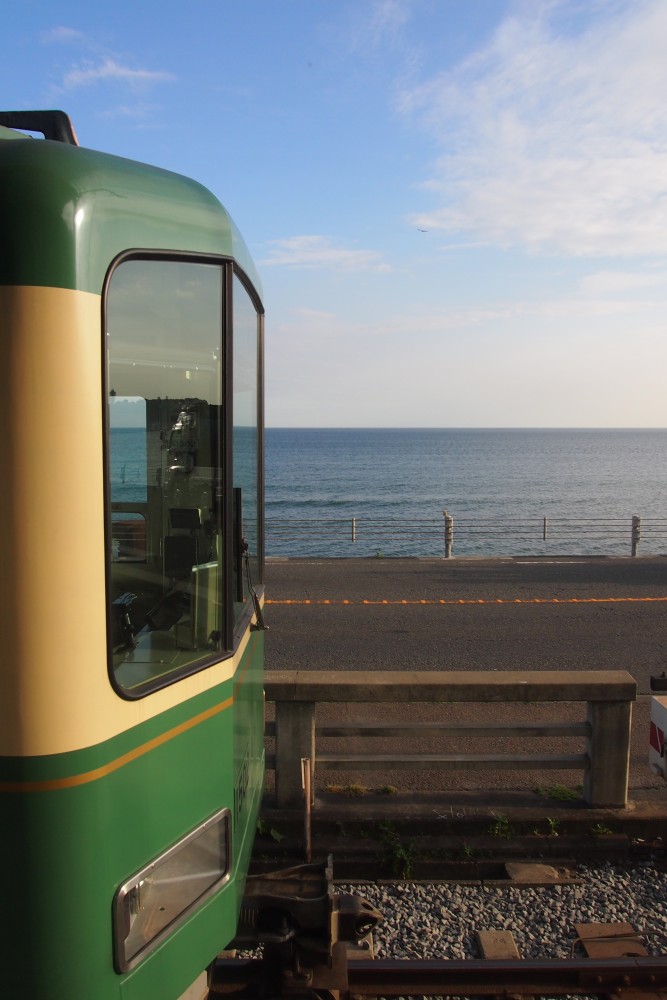