Founded in 1912, Tsujiya is a specialty store dealing in traditional Japanese footwear. At our store, skilled artisans carefully adjust the thong of your sandals to perfectly conform to your feet, so you can get your very own semi custom-made sandal at the store! You can also choose footwear’s base and thongs of your favorite design and we put them together just for you! We offer a wide selection of sizes and designs for men, women and children, and if you're unfamiliar with traditional Japanese footwear, we also offer a lecture on how to walk in your new shoes as well!

Traditional Japanese Footwear: Why is there no left or right in Japanese footwear? 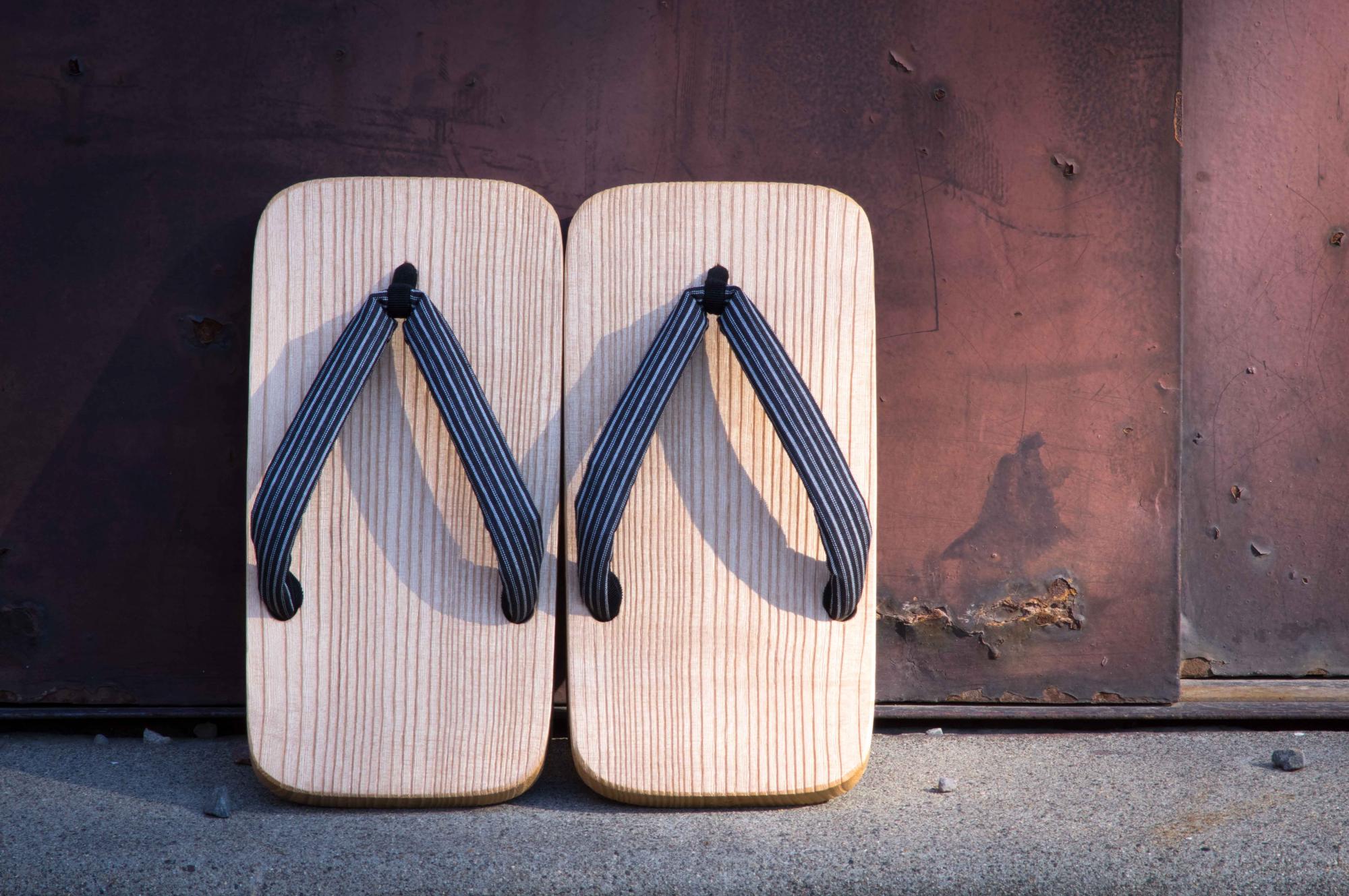 Throughout the whole of Japan's considerable history, thong-style footwear of one type or another has been worn.

Though obviously different from shoes, Japanese open-toed footwear is also different from sandals developed elsewhere in that they were designed based on a uniquely original idea.

The feet are considered the key to staying healthy and it is upon this secret which Japanese traditional footwear evolved.

No Left or Right in Traditional Japanese Footwear? 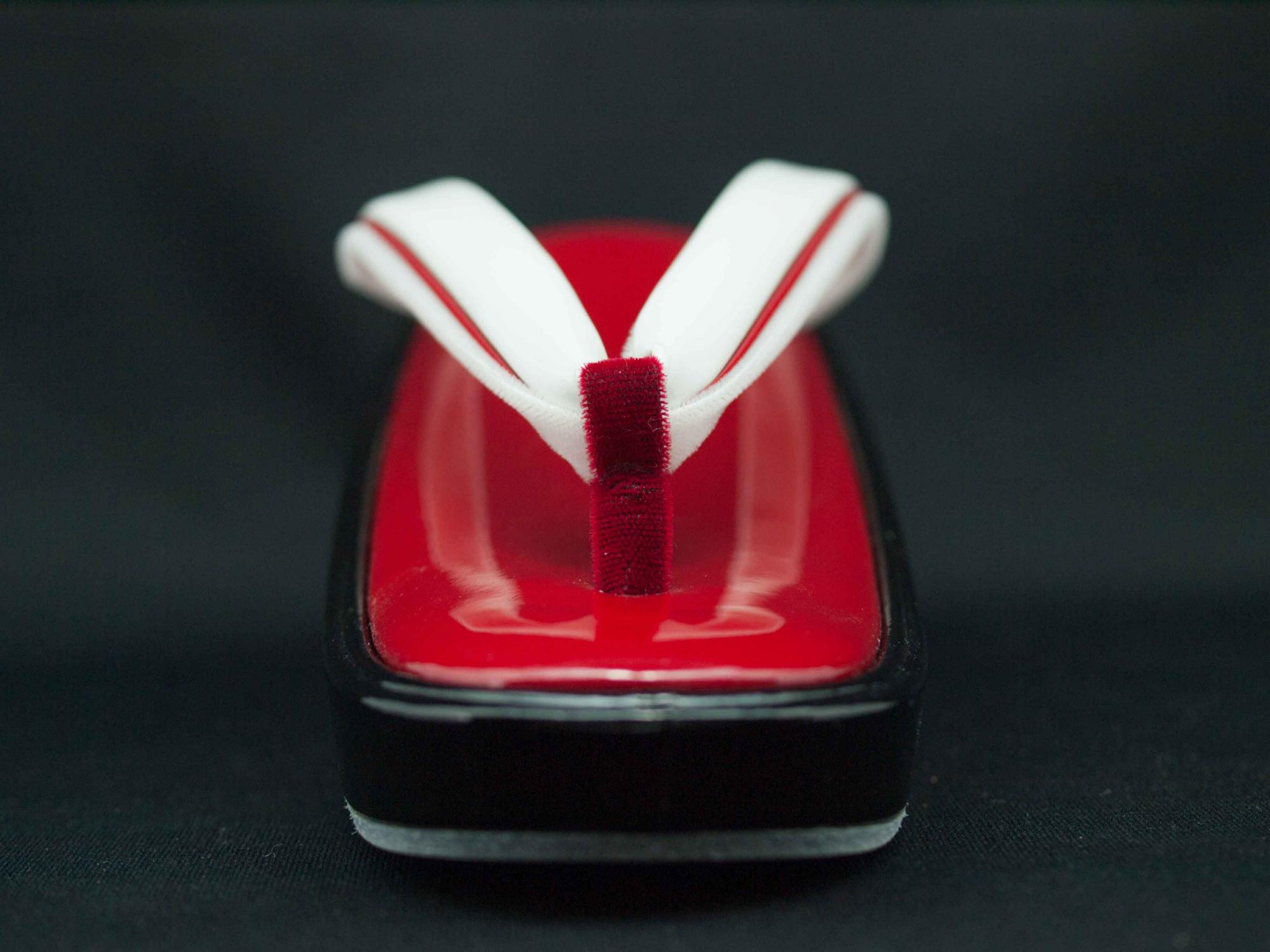 While footwear held on by a thong is also seen in other countries such as Southeast Asia and Egypt, the distinguishing characteristic of traditional Japanese footwear is that it has no “left” or “right.”

The Japanese concept of footwear differs greatly from a shoe or a sandal.

Inside their houses, Japanese people are practically always barefoot, and walking or sitting on clean floors or tatami mats.
Of course, if possible, they would prefer to walk barefoot outside as well.

Ultimately, shoes and sandals are designed to be part of the foot. The idea behind Japanese footwear, however, is closer to a miniature portable floor or tatami mat under one’s feet.
While there are left and right feet and thus matching shoes, there are no such distinctions for floors or mats.

Indeed, this Japanese desire for barefoot living is what makes such footwear so good for one’s health.

Well-Being from the Feet Up 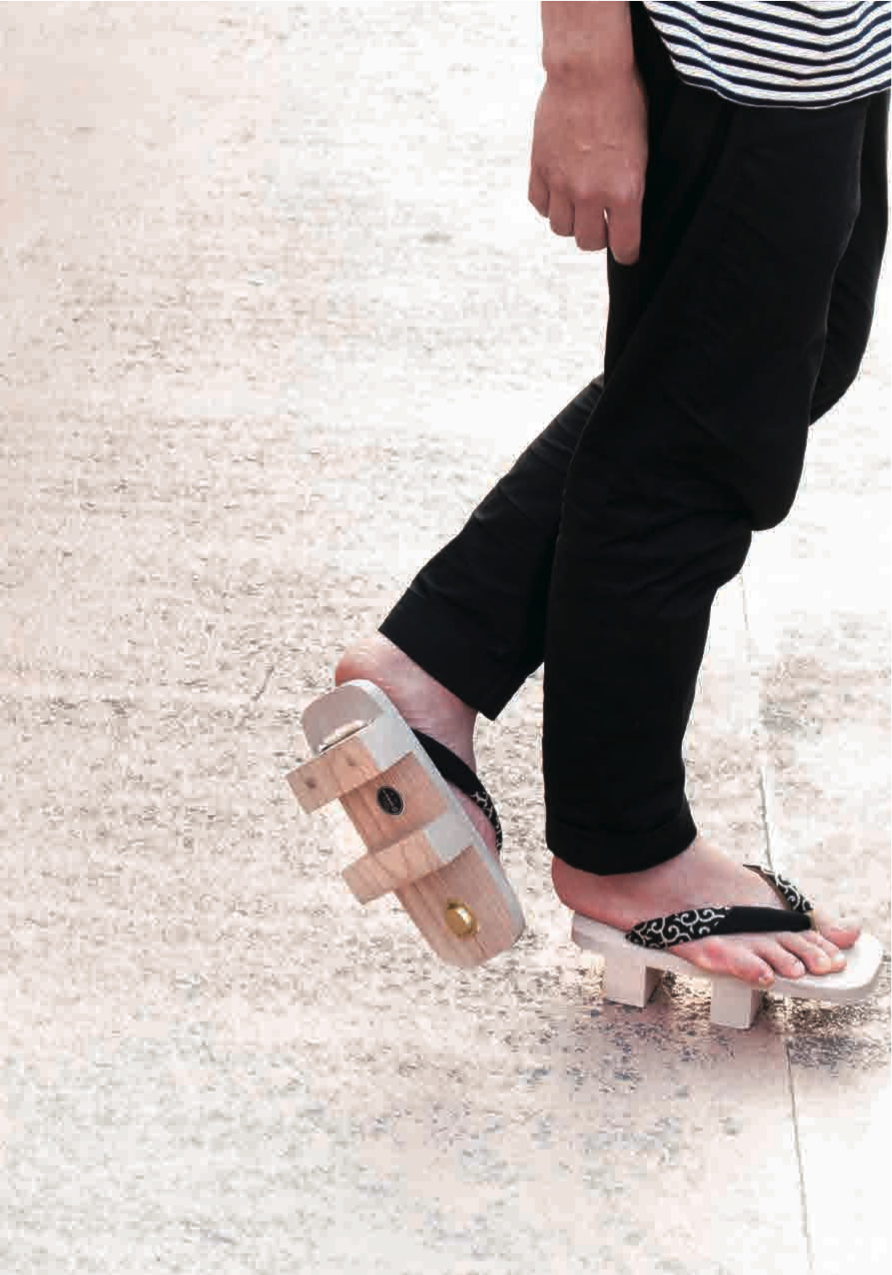 Our feet contain concentrated areas of peripheral nerves known as “reflex zones,” which affect our entire bodies, including our internal organs.

That being said, we can’t just go out and about barefoot, but we can get close by wearing traditional Japanese footwear.

Footwear that does not clamp down on the foot won’t impede circulation.
This relaxed fit not only prevents deformation of feet and toes such as bunions, but also strengthens one’s arches.

The thong in the center of the platform is held between one’s toes, which naturally causes one to stand with their weight resting on the inside of the foot from the big toe to the heel. This is said to increase the strength of the inner foot muscles such as the psoas major.

One’s center of balance is set towards the inside of the foot between the arch and the heel.
In Eastern medicine, this is said to create joukyokajitsu, meaning a relaxed upper body and a stable lower body. As a result, one will naturally adopt a posture which will prevent hunchback or swayback.

Essentially, just wearing Japanese footwear is a form of exercise.

How to Wear, How to Walk 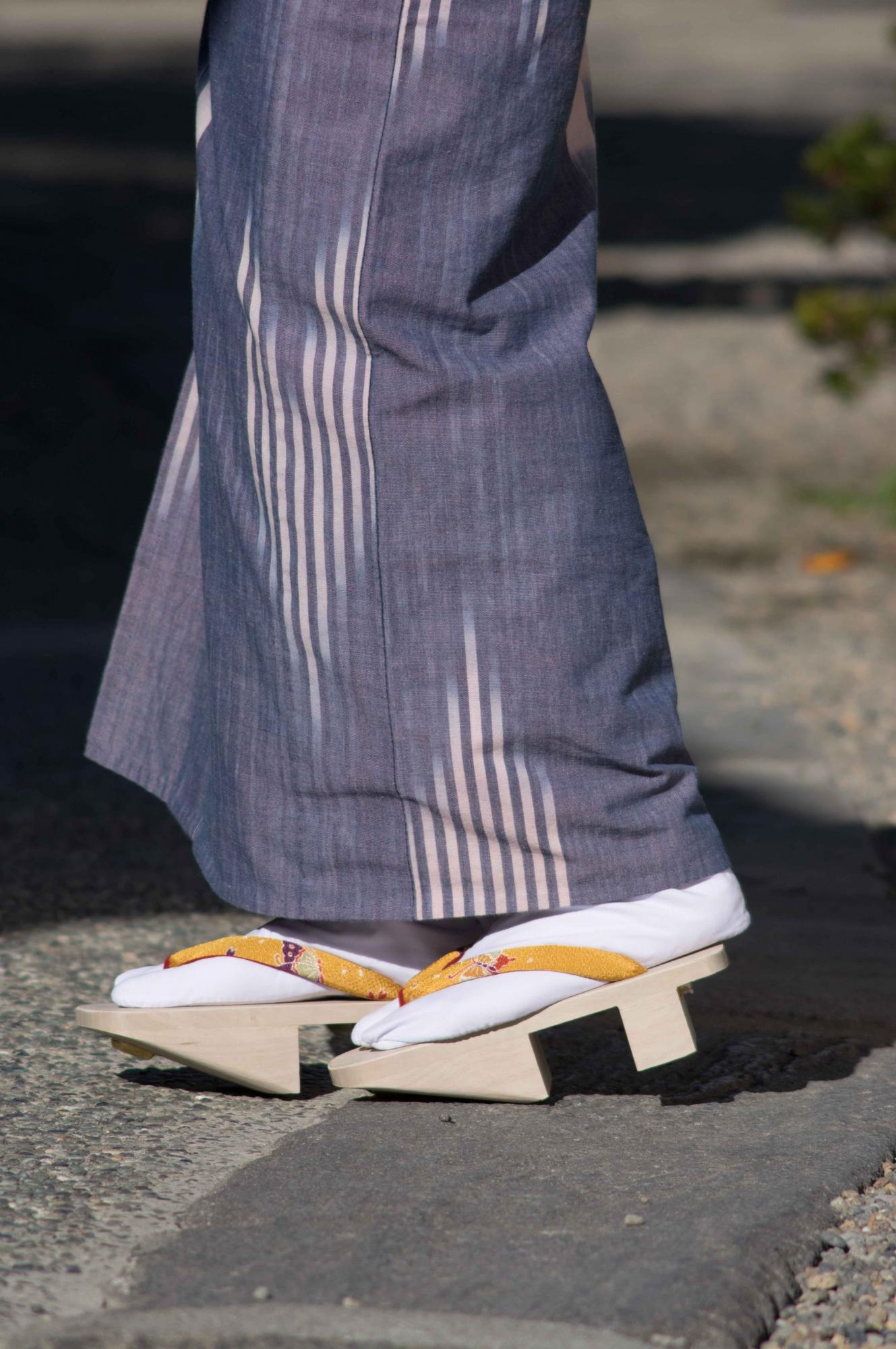 Putting on and walking in Japanese footwear is a completely new and different experience for most people. This is because they were designed with a totally unique idea of how footwear should fit.

With traditional Japanese footwear, The maetsubo, the middle part of the thong which connects to the platform, is not meant to wedge down into the gap between the big toe and the index toe. Instead it is designed to have a slight gap so the thong rests lightly between the toes. An ideal fit is one where the heel extends two or three centimeters over the back end of the platform.

When walking, do not land on your heel like you would when wearing a shoe. Instead, emulate the “shuffling” commonly seen in Japanese performance and martial arts. Do not swing your arms widely or swivel your hips and legs as with a shoe. Rather, use the muscles around your hips, not just from below the knee, when putting your legs forward.

When you have mastered walking in geta, where two wooden “teeth” raise the base off the ground, you’ll hear a delightful “clack, clock” with each step.
Tsujiya Honten holds a “Wa (Japanese-style) Footwear Walking Class”. Please see our web site for details. 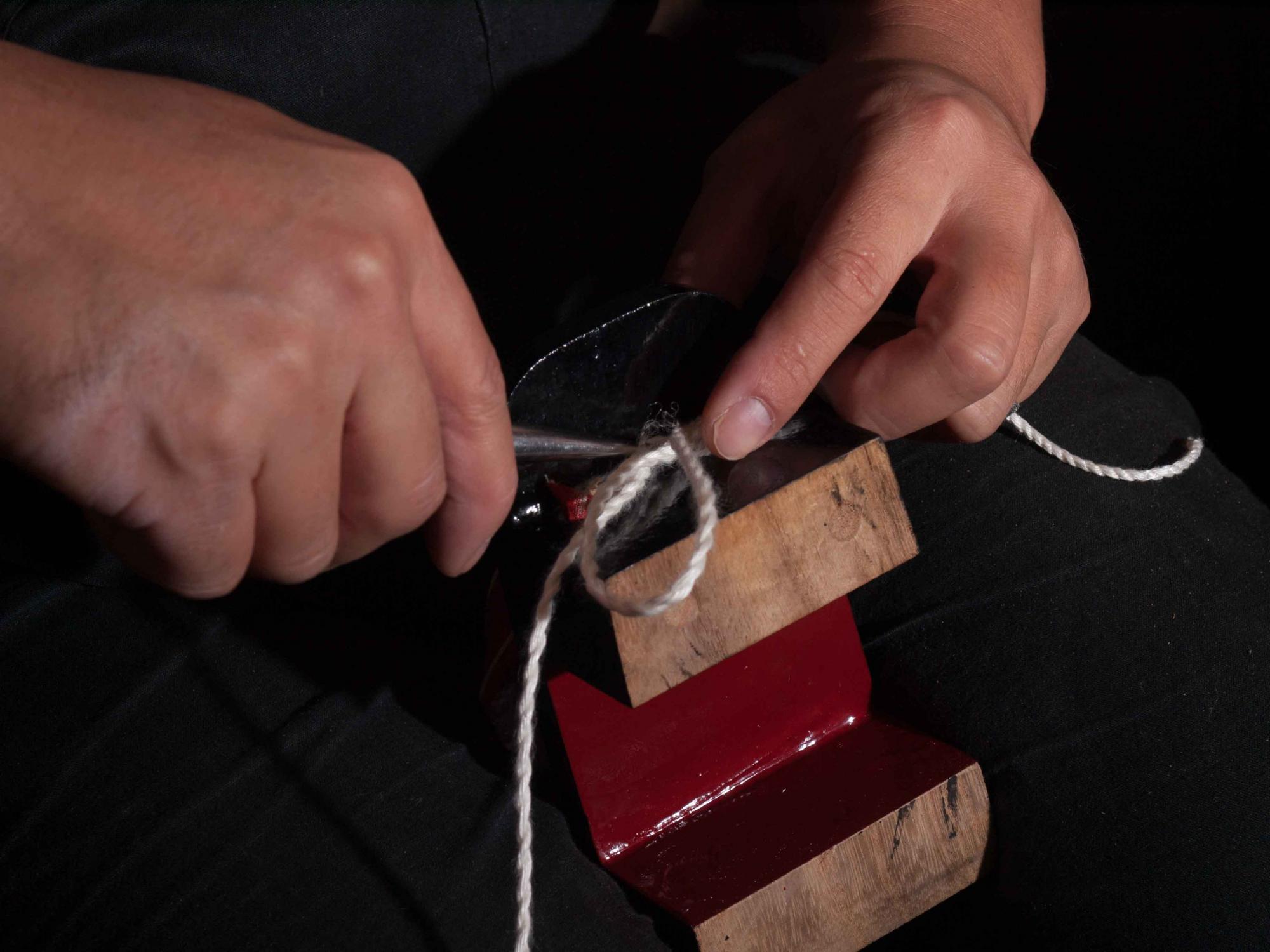 If you are looking for a quality pair of traditional Japanese footwear, the most important thing is to pick the right store.

This is because a true retailer of Japanese footwear doesn’t sell ready-made goods like a standard shoe store.

Instead, Japanese footwear retailers offer a unique semi-made-to-order service. The footwear’s base and thongs are made by separate craftsman to create a product that matches each customer’s feet.

So, while two given pairs of footwear may look the same, a difference in the fitting of the thong will make them feel completely different when worn.

Indeed, a proper footwear artisan must understand how Japanese footwear differs from a standard shoe in terms of how they are worn, and how the wearer must walk and stand in them.
Only then can he fit the thong properly and realize an excellent finished product.

Yet, the number of retailers who understand this essence of Japanese footwear has dwindled. More and more retailers sell ready-made goods, and so-called “traditional” footwear with non-adjustable thongs grows more prevalent.

Come to Tsujiya Honten, where the artisan crafters thoroughly understand what makes their product special, and get your own genuine, personalized piece of Japanese footwear. 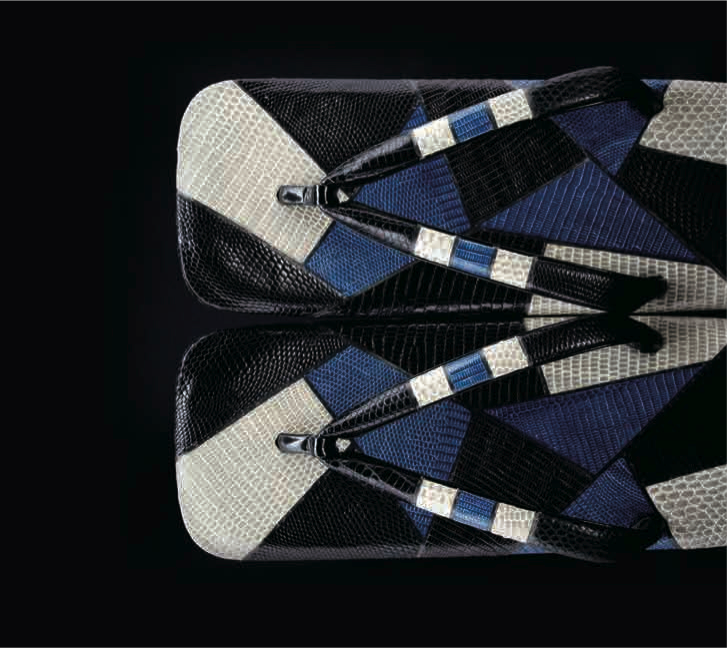 Another unique feature of Japanese footwear is how it takes advantage of its wide, “picturesque” bases.

Some pieces of footwear have ukiyo-e designs printed or motifs of plants, dragons, or tigers engraved on their surfaces.

There are even examples of footwear with hand-painted pictures by the artisan on each item, or ones decorated with “maki-e”, a traditional gold and silver lacquering technique; ones embedded with slices of shiny shells in a process called “raden”; or others grafted with leather of varying colors and textures known as “kiritsugi”, and still many other varieties exist.
With designs ranging from traditional to modern art motifs, can any other type of footwear boast such prolific use as a means of artistic expression?

Of course, such designs on the base top cannot be seen while the item is being worn.
However, they can be seen in glimpses with each step, and once they are off your feet and lined up in the foyer, they draw attention just like any other work of art.
That is the distinct appeal of traditional Japanese footwear. 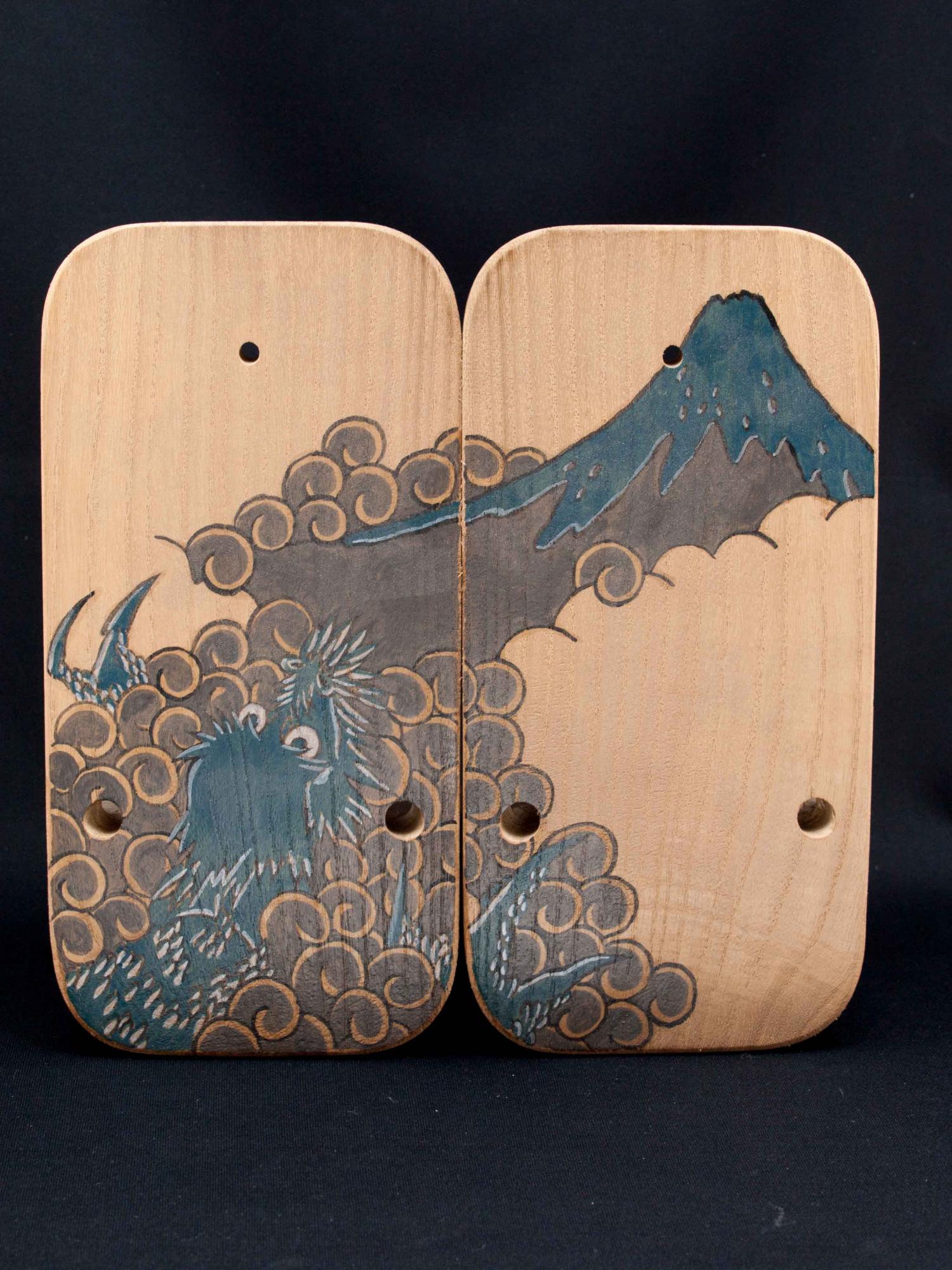 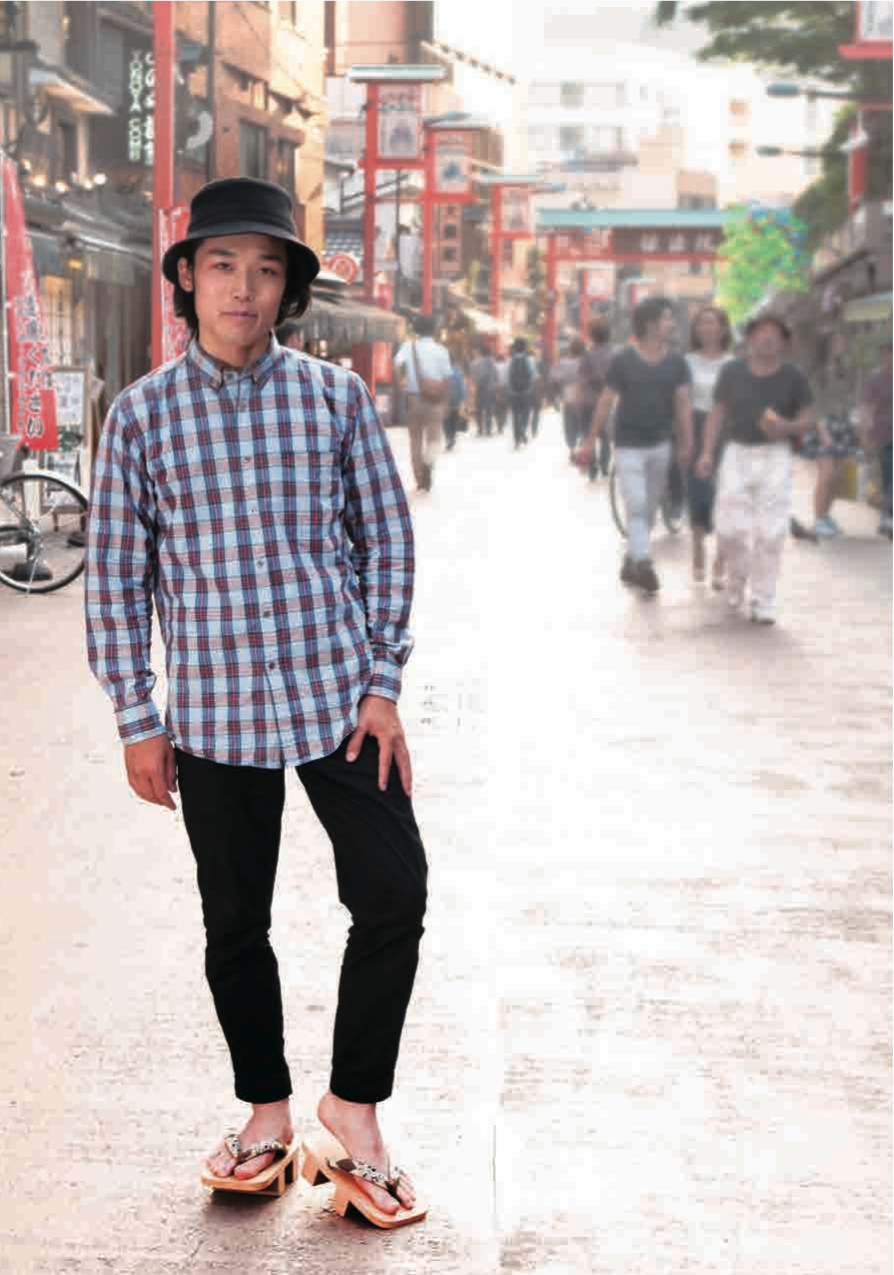 Traditional Japanese footwear is good for your health and beautiful to behold, so we hope you’ll enjoy wearing them with any style of clothing and not just kimonos.

They look marvelous with casual clothing, and can make for a compelling ensemble with traditional clothing of other cultures as well.

From ancient times in Japan, the saying “putting on geta” has been used to mean making someone or something look even bigger and better.

Indeed, geta, the traditional footwear item with raised “teeth” platforms, are much taller than shoes, so wearing them can make you look taller, and your legs appear longer.

You might expect such tall footwear to be quite heavy, but geta are made from the wood of the paulownia tree, and therefore you’ll surely be surprised at how light they actually are.

Walking in the proper way while wearing high quality geta made from light and soft paulownia with thongs custom-fit by a skilled artisan, will ensure that even the longest of walks will be comfortable and pleasurable.